South Carolina wears the crown, while it’s coulda, woulda, shoulda for seven others 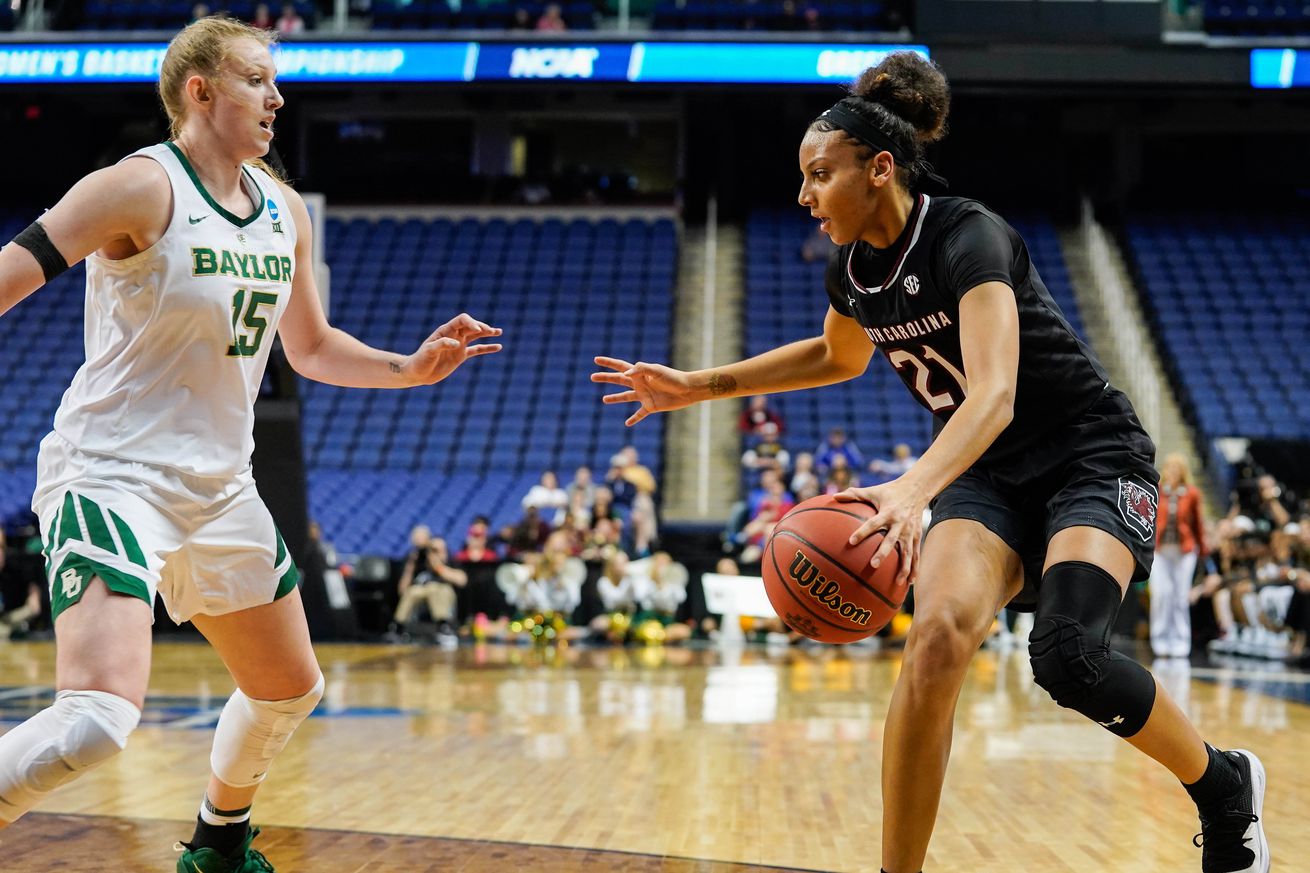 Lauren Cox (left) and the Baylor Lady Bears wish they could have had one last shot at beating Mikiah Herbert Harrigan (right) and the South Carolina Gamecocks. | Jim Dedmon-USA TODAY Sports

The South Carolina Gamecocks finished the season as the undisputed No. 1 team, ranking at the top of both the AP Top 25 and USA Today Sports WBCA Coaches Polls. Here’s a look at how they got there, plus the paths the next seven teams took to their final rankings.

Now that the regular season is over and the NCAA Tournament has been canceled, here’s one last analysis of the AP Top 25 Poll. You can check out the entire Top 25 here and read about the eight best teams in the country below.

The Gamecocks started the season at No. 8 and a great defensive performance in their second game on Nov. 10 against then-No. 4 Maryland Terrapins moved them up to No. 6. From there, they were ranked either fifth or sixth over the next five weeks before moving up to No. 4 on Dec. 23.

On Jan. 13, South Carolina moved up three spots to No. 1 after then-No. 6 Baylor Lady Bears defeated then-No. 1 UConn Huskies and both the No. 2 Oregon Ducks and No. 3 Oregon State Beavers lost to the then-unranked Arizona State Sun Devils.

With this week’s ranking, the Gamecocks have held the No. 1 ranking for 10 weeks — exactly half of the season.

The Ducks entered the season as the favorites to win the NCAA Tournament. With John R. Wooden Award winner Sabrina Ionescu returning, voters put Oregon ahead of the defending national champion Baylor Lady Bears. The Ducks started at No. 1 and remained there for four weeks before losing to the Louisville Cardinals on Nov. 30 at Paradise Jam, which dropped them to No. 3.

Oregon’s second and only other loss of the season came against the Arizona State Sun Devils, which dropped them to No. 6. The Ducks improved to No. 4 on Jan. 20 and No. 3 on Jan. 27. After then-No. 2 Baylor was upset by the Iowa State Cyclones on March 8, Oregon moved up to No. 2 and finished the season there.

The Ducks beat the Arizona Wildcats (three times), the Stanford Cardinal (three times), Oregon State (twice), UConn, Arizona State and the UCLA Bruins for 11 Top 25 wins. All of those victories, except for the one over UConn, were against conference foes.

The Lady Bears started at No. 2 after graduating Kalani Brown, who led them to the national title in 2018-19. They fell as low as No. 7 twice this season (Dec. 2 and Dec. 16) but spent the most time (11 weeks) at No. 2. Baylor closed out the last two polls at No. 3 because of their surprising loss to the Iowa State Cyclones.

The Terrapins had a crazy journey this year, starting at No. 4 and falling as low as No. 20 before rising back to No. 4 on March 9 and remaining there in the final vote this past Tuesday.

The Terps’ decline started with the team’s loss to South Carolina, which dropped them to No. 8. On Dec. 5, they lost to another talented team in the NC State Wolfpack, thus, missing out on their second and last chance to gain a signature win in non-conference play. The loss dropped them to No. 13 and losses to the Northwestern Wildcats (Dec. 31) and Iowa Hawkeyes (Jan. 9) dropped them to No. 17 and No. 20, respectively.

The Terps were at their lowest ranking of the season for two weeks (Jan. 13 and Jan. 20) before starting their resurgence. Benefiting from the strength of the Big Ten this year, Maryland was able to steadily improve with wins over the ranked Indiana Hoosiers (who they beat three times), Northwestern and Iowa.

The Huskies have been in unfamiliar territory the past two seasons during which a No. 1 national ranking hasn’t been guaranteed. They fell out of the Top 5 for the first time since 2007 with a No. 6 ranking on Feb. 16.

UConn started the season at No. 5 and even rose to No. 1 for three weeks, from Dec. 23 to Jan. 12. However, losses to No. 1 South Carolina, No. 2 Oregon and No. 3 Baylor defined their season. The Huskies were great as always, but not the best team in the country.

The Cardinals also had a back-and-forth season in the rankings. After starting at No. 9, they rose to No. 2 on Dec. 2 after beating Oregon. Just one week later, they dropped to No. 7 because of a loss to the unranked Ohio State Buckeyes. Another low point was reached on Feb. 10 when Louisville fell four spots from No. 5 to No. 9 after losing to then-No. 17 Florida State Seminoles and the unranked Syracuse Orange in the same week.

Louisville has now finished the season at No. 6 — three spots higher than their preseason start, proving that they held their own against the top teams in the country despite the graduation of two-time ACC Player of the Year Asia Durr.

Stanford was the first team to fill in for Oregon at No. 1 after the Ducks lost to Louisville. The Cardinal were at the top spot from Dec. 2 to Dec. 22, but a loss to the unranked Texas Longhorns on the 22nd dropped them to No. 5 when the rankings came out on Dec. 23. The Cardinal, who had trouble with Oregon all season, fell as low as No. 8 on Feb. 10.

The Wolfpack experienced single-digit ranking status in the middle portion of their season (Dec. 9 to Feb. 16) after starting at No. 14 in the preseason. They fell back to double-digit rankings on Feb. 17 and March 2, at No. 10 both times.

NC State’s high point was reached on Feb. 10, at No. 4, but back-to-back losses to Louisville and the unranked Georgia Tech Yellow Jackets took them down six spots the following week.

Worked HARD for this.