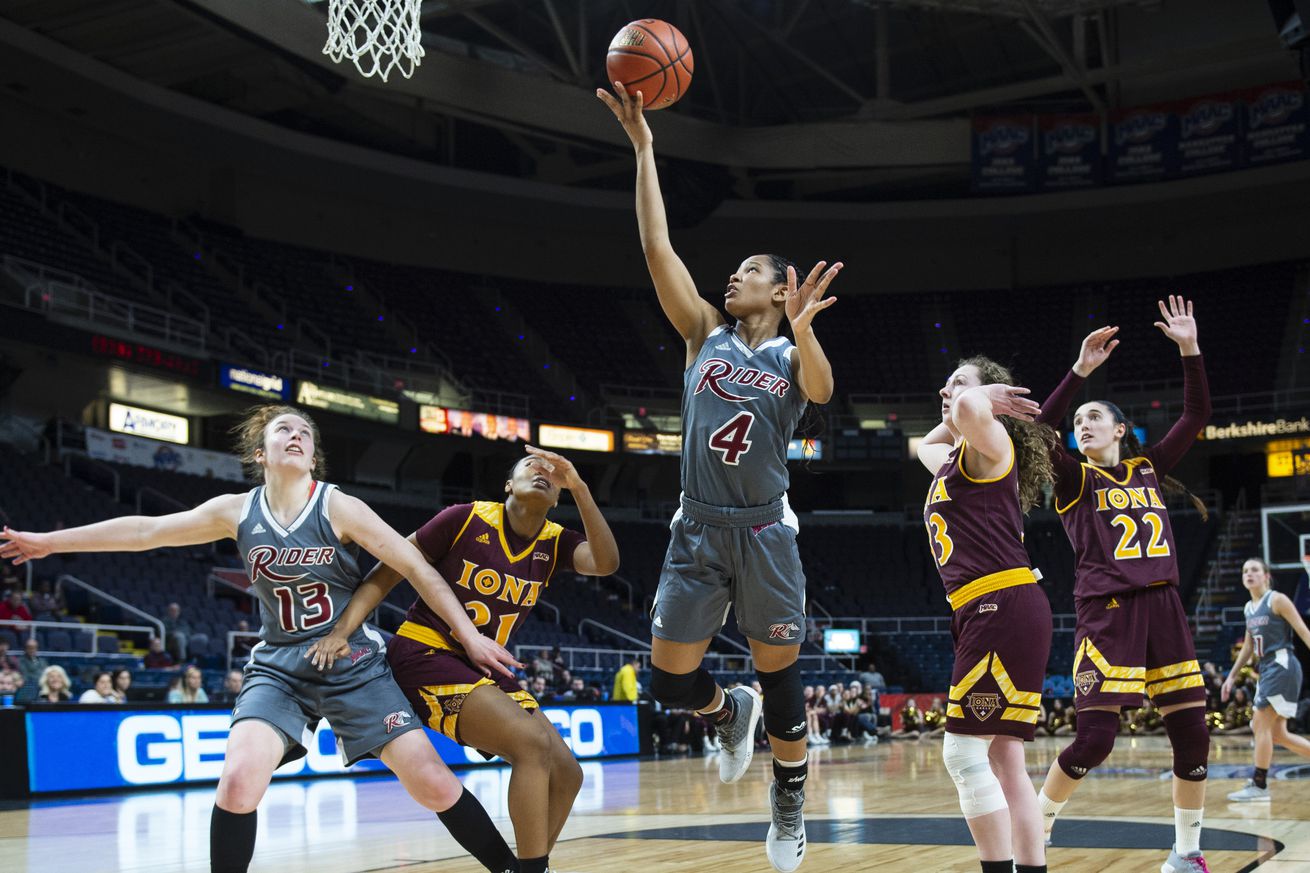 A star for the lesser-known Rider women’s basketball program, Stella Johnson powered the Broncs into a dominant force in MAAC. She joins fellow draftees Joyner Holmes, Beatrice Mompremier and Jaylyn Agnew in getting a second chance at a hard-to-get WNBA roster spot.

With established players opting out of the 2020 WNBA season due to COVID-19-related health concerns or to pursue social justice initiatives, the 2020 WNBA Draft picks who were waived at the roster finalization deadline in May are getting a second shot at a difficult-to-get WNBA roster spot.

Stella Johnson is the latest, and joins Te’a Cooper, Joyner Holmes, Jaylyn Agnew and Beatrice Mompremier in getting a true rookie season.

A star for the lesser-known Rider women’s basketball program, Stella Johnson powered the Broncs into a dominant force in the MAAC. She is a two-time MAAC Player of the Year and was named MAAC Player of the Week 15 times in her final two seasons as a Bronc.

Johnson was drafted 29th overall by the Phoenix Mercury in the 2020 WNBA Draft and waived at the deadline. Given the small program from which she came, to even be drafted is a story of underdog success. To now have a shot with the Chicago Sky, who announced her signing June 29, gives her further opportunity to sweeten the tale.

We are happy to announce we have signed Stella. She is someone who we’ve followed closely. We feel that she is a young player with a lot of potential. We really liked that she is a physical guard, who can give us some guard depth at the point guard and off-guard positions.

Johnson was signed after Sydney Colson, who signed with the Sky after playing last season with the Las Vegas Aces, tested positive for the coronavirus.

The Los Angeles Sparks announced on Sunday the signing of Te’a Cooper, the 18th overall pick in the 2020 WNBA Draft. With backup point guard Kristi Toliver opting out of the 2020 season, Cooper becomes the latest draftee to get a second shot at a difficult-to-get roster spot after being waived at the roster finalization deadline in May.

Cooper — developed under two of the best coaches in college women’s basketball in Dawn Staley and Kim Mulkey — brings an interesting pedigree into the pros. During the 2018-19 NCAA season, Cooper was the leading scorer for Staley’s rebuilding South Carolina Gamecocks. As a graduate transfer at Baylor during the 2019-20 season, she averaged 13.6 points and 4.3 assists per game and was a model of consistency from three-point range, making 41.5 percent of her 4.5 attempts per game.

In a statement on his decision to sign Cooper, Sparks head coach Derek Fisher said:

We’re fortunate to be able to add a player with as much potential as Te’a Cooper. Te’a proved at Baylor that she can both facilitate effectively as a point guard and is also one of the better 3-point shooters entering the WNBA as a rookie. She’ll be able to provide us depth at both guard positions and we’re excited to work with her.

Of her second shot at a WNBA roster spot, Cooper said:

I would like to thank God, my family and the Los Angeles Sparks organization for believing in me. I am beyond grateful for this opportunity and I’m excited and eager to contribute on and off the court in any way possible. I am looking forward to being with my new coaches, teammates, the organization, the fans and the community.

As a rookie on a team stacked with guards, Cooper will have to fight for playing time against Chelsea Gray, Seimone Augustus, Riquna Williams, Brittney Sykes, Tierra Ruffin-Pratt and Sydney Wiese.

The New York Liberty announced Rebecca Allen’s decision to opt out of the 2020 WNBA season due to COVID-19-related health concerns. With the Australian staying put down under, a roster spot opened and the Liberty have filled it with Joyner Holmes, the 19th overall pick in the 2020 WNBA Draft.

From the last pick of the second round by the Washington Mystics in the 2020 WNBA Draft to a roster spot with the Atlanta Dream, Jaylyn Agnew’s WNBA journey just became more interesting. The 5-foot-11 forward out of Creighton was named the 2020 Big East Player of the year as a redshirt senior. She averaged 20.8 points per game and scored a Big East-best 20 or more points in 13 games. Agnew had four 30-point games for the Bluejays and led the nation in free throws, making 76 of 80 attempts.

“I believe Jaylyn is the ultimate sleeper, and we were prepared to draft her before Washington beat us to the punch,” Dream head coach Nicki Collen said. “I have had the opportunity to follow her career from when she was first playing club basketball in high school all the way to seeing her earn BIG EAST Player of the Year and earning a Master’s Degree from Creighton. She is an effortless shooter, with a quick release, and has the quickness to keep defenders honest off the bounce.”

“We will need her three-point shooting to replace what we lost in Renee Montgomery,” Collen added. “At 6-0, she has the length and athleticism to defend multiple positions effectively and takes great pride in it. I am thrilled to have her join the Dream family.”

Renee Montgomery announced last week a decision to opt out of the 2020 season to pursue criminal justice reform. On Tuesday, Tiffany Hayes announced that she also will skip the season but did not specify whether her reasons concern the COVID-19 pandemic or social justice issues.

To fill the void left by Hayes, the Dream also announced on Wednesday the signing Betnijah Laney who last played for the Indiana Fever.

Agnew joins fellow 2020 draft pick Beatrice Mompremier in seizing an opportunity in the highly-competitive WNBA after being cut at the roster finalization deadline. On Tuesday, the Connecticut Sun announced the signing of Mompremier — the 20th overall selection by the Los Angeles Sparks in this year’s draft.

With Jonquel Jones opting out of the 2020 season due to concerns over COVID-19, the Connecticut Sun need a strong presence in the paint and Mompremier appears ready to provide it.

Mompremier, a 6-foot-4 forward, played two years of her collegiate career with the Baylor Lady Bears and finished it with the Miami Hurricanes. At Miami, she recorded 34 double-doubles, scored in double figures in 45 games and grabbed double-digit boards in 35. Mompremier averaged 16.8 points and 9.8 rebounds per game as a senior and 16.7 points and 12.2 rebounds as a junior.

“We are excited to add Beatrice to our Sun roster,” head coach Curt Miller said. “She is a young and talented post player with a high ceiling. Beatrice is a proven collegiate rebounder and crafty scorer who will have the ability to contribute during her rookie season.”​

With the coronavirus pandemic reducing the 2020 season to 22 regular-season games to be played at a single-site location, IMG Academy in Florida, Mompremier — a finalist for the 2020 Lisa Leslie Award — will be playing near her hometown of Miami.

Washington Mystics star Natasha Cloud (social justice reform) and LaToya Sanders (health concerns) joined Jones on Monday in opting out. As more WNBA stars announce decisions to forego the season, other draftees who couldn’t claim a roster spot before could find themselves presented with opportunities now.