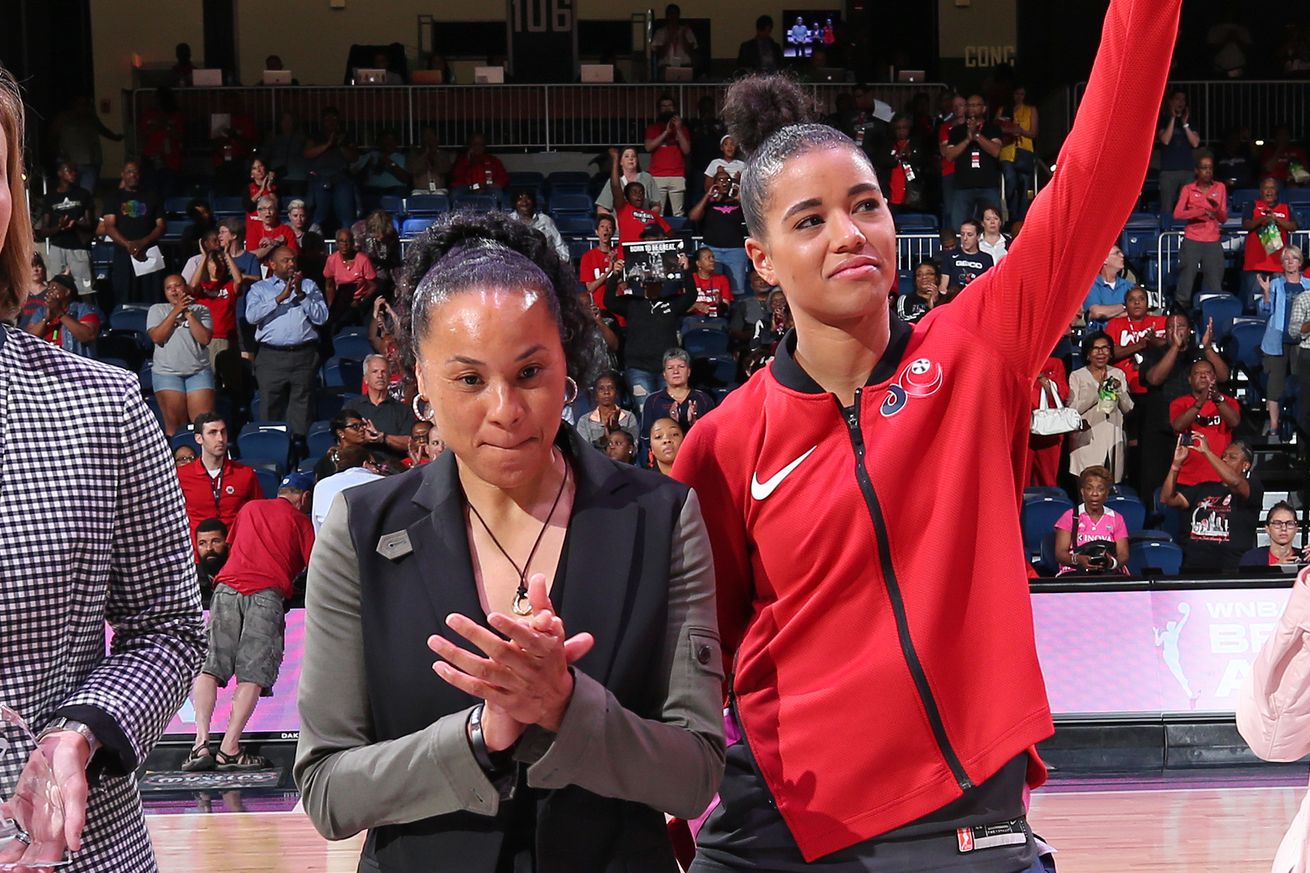 A roundup of news from the world of women’s hoops (and beyond) from Swish Appeal (and beyond), featuring some of the strong women of women’s basketball who are leading the way.

Colin Kaepernick was blacklisted from the NFL following his peaceful protest against the police killings of Black Americans. He sued the NFL’s owners over their collusion and won a settlement. Still, he has not played a snap of football since January 2017.

NFL commissioner Roger Goodell admitted last week amid nationwide protests following the police killing of yet another unarmed black man — George Floyd — that he and the NFL were wrong about the the players’ protests. Goodell’s failure to mention Kaepernick by name or offer any reparative action for ending the quarterback’s career during his prime, however, underscores the sacrifices and injustices Kaepernick has endured personally for the sake of broader justice culturally.

By contrast, Maya Moore chose to pause her career — now her second year away from basketball — and pour her undivided time and energy into criminal justice reform, ministry and family.

She and her Minnesota Lynx teammates famously wore protest shirts in 2016 following the murder of Philando Castile in St. Paul, Minn. “If we take this time to see that this is a human issue and speak out together, we can greatly decrease fear and create change,” Moore said during a pregame press conference. “Tonight we will be wearing shirts to honor and mourn the losses of precious American citizens and to plead for change in all of us.”

The four Minneapolis police officers assigned to work the game did not appreciate the Black Lives Matter t-shirts the players wore during warmups to “honor and mourn the losses” and left their posts in protest.

Three years and 11 months later, another black man has died from police violence in Minnesota, Floyd, sparking worldwide protests against racial injustice and police brutality. Though the WNBA issued fines to players who wore the t-shirts, it later rescinded them and got on board with the players’ efforts to use their platform to fight racial injustice. This shows that when individuals stand alone in their fight over systemic issues, it can take weeks — or years — for institutions and broader segments of society to get on board.

This also suggests that people, even when they feel they are standing alone and screaming into a void, should never give up their demands and advocacy for what is right and just.

It is not yet known if the NFL will implement change beyond Goodell’s admission, but the WNBA has embraced the players’ efforts to foster positive social change.

Now up for the Muhammad Ali Sports Humanitarian Award for her work on criminal justice reform, Moore is sought after by the media for her insight, which she shared on ESPN’s “Outside the Lines.”

.@minnesotalynx star @MooreMaya shares her thoughts on Drew Brees' comments and what her reaction has been to the nationwide #GeorgeFloydProtests pic.twitter.com/kepEbxGjhh

Grab your favorite brew, sit back and catch up on these essential reads of the last week, from Swish Appeal and beyond:

We saw someone get the life choked out of them on social media.

Pause and think about that.

How could you not release your knee to allow this man to breathe? He’s on his stomach. His hands are behind his back. And you just continue, despite his pleas for air.

Some of these killings you only hear about. You hear about them, and you can only imagine. But you don’t see someone actually lying there. Gasping for air. Taking their last breath. A mother’s son. A brother.

White silence on social media: Why not saying anything is actually saying a lot

White silence is incredibly powerful. It’s not neutral. It acts like a weapon. It’s not even silent. It speaks volumes, right? And the people of color who are around a silent white person, they hear the silence. And they feel it. And they feel what it means, which is: I don’t have your back. Or I don’t care enough to get uncomfortable to speak out. Or you know, despite the fact that black and brown people have been acting up and protesting on our own behalf for centuries, I still don’t quite get it enough to say something.

I’m from Compton, California. The inner city. I’m old enough to remember the brutal beating of Rodney King by the LAPD. That was a horrible, horrible time. It was my sophomore year at USC and I barely made it home before the riots began. Seeing that kind of brutality with my own eyes was disgusting, yet we continue to see officers beat down innocent protestors today. How can that be?

Back then, we heard cries from rap groups like NWA, and others. But, police brutality wasn’t something many Americans could comprehend. Now however, with the advent of body cams, social media, and cellphones, it’s starting to become crystal clear to the naysayers of decades past.

In July 2016, myself and my WNBA family decided not to be silent in our support of the #BlackLivesMatterMovement for the remembrance of Alton Sterling & Philando Castile. I’m proud to see that nothing has changed in our efforts as we celebrate the life of George Floyd, Breonna Taylor, Ahmaud Arbery and many other African-American lives lost to police brutality and racist motives. What has changed, are the many individuals that have joined our forces on the frontline. Today, in Brooklyn at the Memorial Service, organized and led by Terrence Floyd, brother of George Floyd, I was able to be apart of and witness the beauty of unity & love amongst one another in our efforts for change. Justice will not be served until those who are unaffected are as outraged as those who are. Mr. George Floyd, you are changing the world. Rest in Power.

Corporate America can no longer get away with token responses to systemic problems,” said Mr. Walker, who has been protesting in New York. “It is going to take a systemic response to sufficiently address this crisis that has been decades in the making.

Your Silence Is a Knee on My Neck

I’m writing this because I have a platform. It may not be the biggest platform in the world….. but it’s bigger than a lot of people have. It’s what I’ve got. And the only thing I feel like using that platform for right now is to send a message to the so-called “neutral” people out there. It’s to tell them that we’re changing up the definitions of some of these words they’ve been hiding behind.

It’s to tell them that “seeing both sides” means having blood on their hands – and “opting out” means leaving innocent people to die.

It’s to tell them that neutrality about black lives might as well be murder.

It’s to tell them that their silence is the knee on George Floyd’s neck.

If you still haven’t figured out why the protesting is going on. Why we’re acting as we are is because we are simply F-N tired of this treatment right here! Can we break it down for you any simpler than this right here????

And to my people don’t worry I won’t stop until I see CHANGE!!!

Can the WNBA be bigger than its ‘BIGGER THAN BALL’ t-shirt?

Similarly, the WNBA can lay down the gauntlet for other sports’ leagues by modeling how to implement real, reparative practices that, while still incomplete, can begin to address the inequities from which people and communities of color disproportionately suffer.

The WNBA is signaling that it can competently, safely play basketball during a pandemic, a highly-complicated task. In contrast, fairly and justly compensating and caring for those people of color who will make this complicated return to play possible should be simple.

A challenge for fans who demand that players, teams and journalists “stick to sports”: Can you see the problem with proclaiming to “love” a player like Cloud but then feeling uncomfortable and growing silent when she speaks out against racial injustices that could cost any black person, including her, their life?

What kind of soul searching will you do to love and support the human who faces the anguish of racism daily as much as you claim to love the basketball player?