Swish Appeal Roundtable: A look at the remixed rosters of WNBA free agency 2020 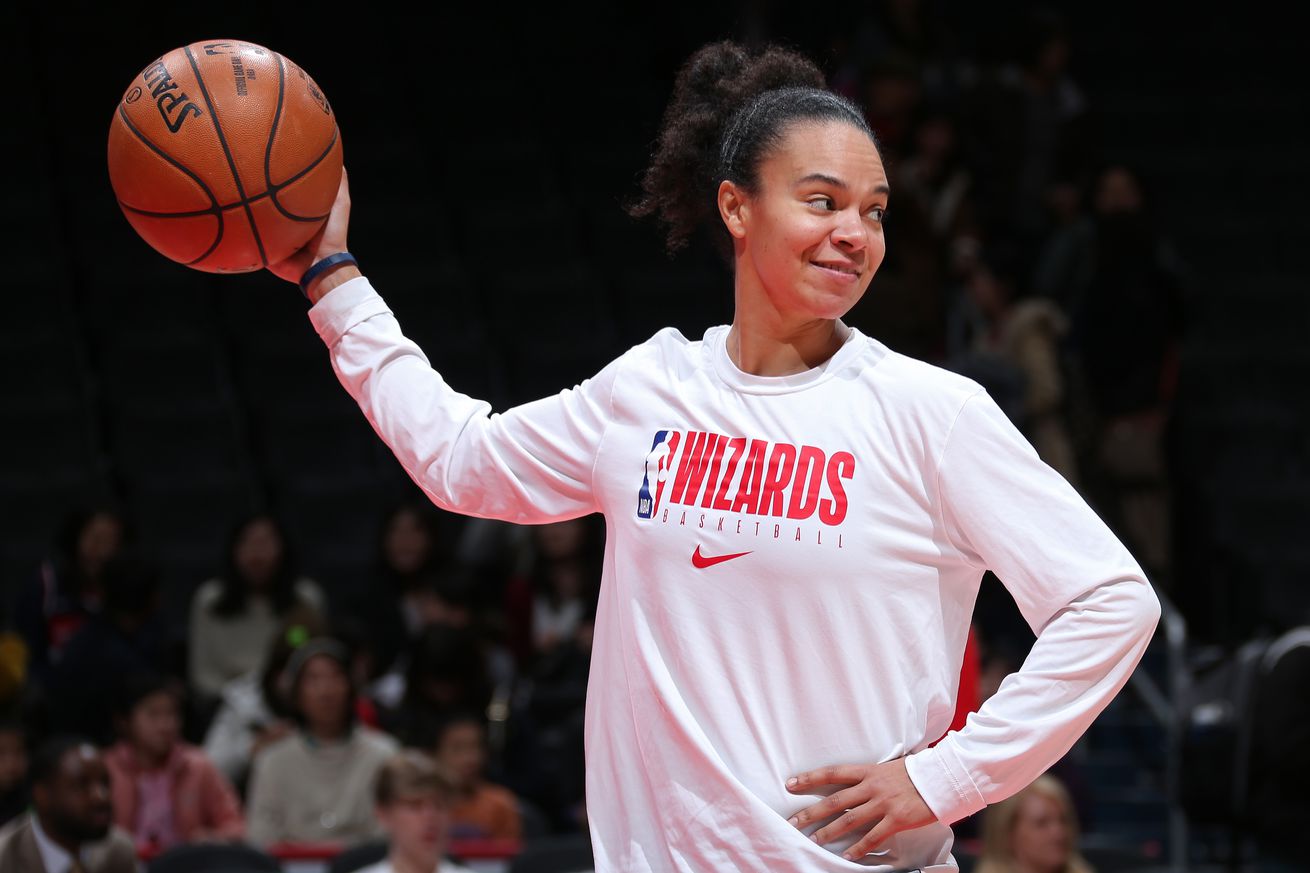 Kristi Toliver, 2019 WNBA champion with the Washington Mystics and winner of the Free Agency Enigma Award in 2020. | Photo by Ned Dishman/NBAE via Getty Images

The Swish Appeal Roundtable convenes once again, this time for some real talk on the dizzying WNBA free agency signing period of 2020.

Two weeks into the free agency signing period of 2020, Angel McCoughtry’s move to the Las Vegas Aces after spending her entire career with the Atlanta Dream — plus Skylar Diggins-Smith’s exchange of Dallas Wings’ blue and green for Phoenix Mercury orange, and DeWanna Bonner’s swap of Mercury orange for the Connecticut Sun’s hue — almost seem like old news. Across the WNBA, teams have parted ways with longtime “faces of the franchise,” and some players have signed with teams that once were bitter rivals. It’s a lot to unpack and process! Thus, the Swish Appeal roundtable convenes once again, this time for some real talk on the dizzying player moments during WNBA free agency 2020.

Zachary Ward: Kristi Toliver going back to the Sparks. She seemed so happy in D.C. where she is still an assistant coach for the Washington Wizards. It’s surprising to see her leave a team that could win more championships in the near future.

Cat Ariail: The willingness of teams to let face-of-the-franchise players walk away. Like Zack, I was surprised that Toliver departed D.C. However, her comments about “the business of basketball” suggest Mystics head coach and general manager Mike Thibault refused to be overly sentimental and allowed her to go instead of overpaying her. The same goes for the Phoenix Mercury with DeWanna Bonner and the Minnesota Lynx with Seimone Augustus.

Jim Savell: The sheer amount of movement. Notable players made moves from all corners of the league which shows the level of competition and the willingness to be in a place where they can win.

Tamryn Spruill: Like Cat, I’m shocked by the number of franchise staples who will be donning different jerseys this season, like McCoughtry, who’d only ever worn Dream blue and now will be wearing Las Vegas Aces red, and Diggins-Smith, who was synonymous with Wings’ blue and green and now will be rocking Mercury orange. It feels like we’re moving into a new era and that will take some getting used to.

Eric Nemchock: I would say Seimone Augustus signing with the Sparks. While I don’t think it’s a needle-moving transaction at this point in her career, Augustus is one of those players you come to associate with a single franchise. She was a free agent, of course, but I guess it just seemed like a foregone conclusion that she’d finish her amazing career in Minnesota.

Team looking most like a contender two weeks into free agency

ZW: Las Vegas Aces. With the addition of McCoughtry, the Aces are becoming a superpower. Adding her to Liz Cambage and A’ja Wilson is going to make a team that pushed the Mystics to four games in the 2019 semifinals even better. McCoughtry won’t have to force or carry the offense in Vegas; she can play her game and possibly revive her career. The Aces also added a solid point guard in Danielle Robinson.

JS: The Storm return most of the roster that was able to capture the 2018 WNBA championship. The rest of the league, meanwhile, has improved on paper only or replaced an outstanding talent. With so many questions, the Storm have a solid, proven core.

TS: I get the inclination to go with the teams that won it all most recently. Siding with consistency makes sense. But the Storm’s two biggest stars didn’t play last year because of injury and Delle Donne is coming off back surgery. If everyone is healthy, I can see Seattle and D.C. meeting in the Finals again. But if Diana Taurasi is healthy and playing alongside Skylar Diggins-Smith and Bria Hartley, plus Brittney Griner in the paint, I wouldn’t count Phoenix out.

EN: At the moment, I think Los Angeles is the team to beat. Chelsea Gray and Kristi Toliver are going to make an incredible offensive pairing in the backcourt, and the team has a ton of skill up front with Candace Parker, Maria Vadeeva and the Ogwumike sisters. They’re just absolutely loaded.

Team looking most like a pretender two weeks into free agency

ZW: Dallas Wings. They lost Skylar Diggins-Smith in 2020 and Liz Cambage last year. Arike Ogunbowale is going to be a huge star, but Dallas needs to find other puzzle pieces to fit around her. The Wings have added two young players in Katie Lou Samuelson and Marina Mabrey … who haven’t proven themselves in the league yet. They also have Kristine Anigwe and Megan Gustafson who are in the same boat.

CA: For McCoughtry, I like the move to the Aces. For the Aces, I do not like the addition of McCoughtry. I wanted to see Vegas continue to cultivate the Cambage-Wilson-Hamby-McBride-Plum quintet. In the playoffs, when the Aces were quite good, those five posted a net rating of 8.7 in 65 minutes. The addition of McCoughtry would seem to prevent these younger players from reaching their championship potential.

TS: All the excitement about Bonner’s move to the Connecticut Sun drained when other teams made bigger moves and the Sun let go of both Shekinna Stricklen and Courtney Williams. Sure, the Sun still have Jonquel Jones, Alyssa Thomas and Jasmine Thomas, but their roster so far doesn’t seem far and above the other 11 teams, especially because of the pieces they lost.

JS: I would have to agree with Tamryn about Connecticut. So much of their identity is wrapped up in being able to attack teams from every part of the floor and much of that is lost with the departures of Williams and Stricklen. The skill-set difference between Briann January and Courtney Williams will have a dramatic impact on the club.

EN: Add me to the list of Dallas Wings skeptics. They own four first-round picks in the coming draft but there are only so many spots on a roster. So, what will they do there? Most of the players already on that team are so young, too. What will the Wings do with all those assets, and what will the team’s identity be once the season starts? Your guess is as good as mine.

Most exciting movement of an individual player

TS: Bria Hartley to Phoenix! She is one of the most overlooked guards in the WNBA — a truly hidden gem. With the Mercury, she should develop the consistency she couldn’t muster with the struggling Liberty in New York and show more than just glimpses of her talent. Her remarkable quickness should accelerate the Mercury offense until it catches up pace-wise with the rest of the league.

ZW: Courtney Williams to Atlanta. She is an up-and-coming star who played a big role in Connecticut’s run to the WNBA Finals last year. She is from Georgia and the energy she brings should make her a player that the Dream faithful will get behind with McCoughtry now gone. Williams and Kalani Brown could bring an inside-outside game that excites fans for years to come.

CA: Both of the former Sun going South. In addition to all the swag that Williams will bring to the ATL, Stricklen is the knockdown 3-point shooter the Dream desperately have needed.

JS: Kristi Toliver going back to the Sparks is definitely fun. The team needed backcourt help and to nab one of the best guards in the league is definitely one way to shore it up. Toliver makes the team more dynamic offensively.

EN: Selfishly, I’m going to say Chicago’s acquisition of Azurá Stevens. I really wanted the Sky to draft her back in 2018 because I loved the potential fit with the rest of the team, as well as her potential. Neither of those things have changed. I’m very excited to watch Stevens suit up for my Sky.

ZW: Augustus signing with the Sparks. It would have been great to see her end her career with the Lynx. Of Minnesota’s “big five” over the past decade (Lindsay Whalen, Sylvia Fowles and Rebekkah Brunson being the others), only Augustus and Maya Moore had spent their entire careers with the Lynx. Augustus entered the league five years before Moore so she was truly a fan favorite.

TS: Just your friendly PSA that Tina Charles has not signed yet. She is listed on the Liberty website as a member of their 2020 roster but official news from the team about a contract for Charles has not been released.

JS: The Indiana Fever have not signed anyone who is sure to impact the roster. With a new coach, it may be about understanding what you have and working with it for a season before making any drastic changes.

EN: If there’s a team that concerns me, it’s the Lynx. We’ve heard next to nothing from them since free agency began and their willingness to let Augustus finish her career with another team makes me wonder if things are going to get worse in Minnesota before they get better.

WNBA free agency in 2020 as a song lyric

JS: “Getting Better” by The Beatles

EN: “The Big Money” by Rush