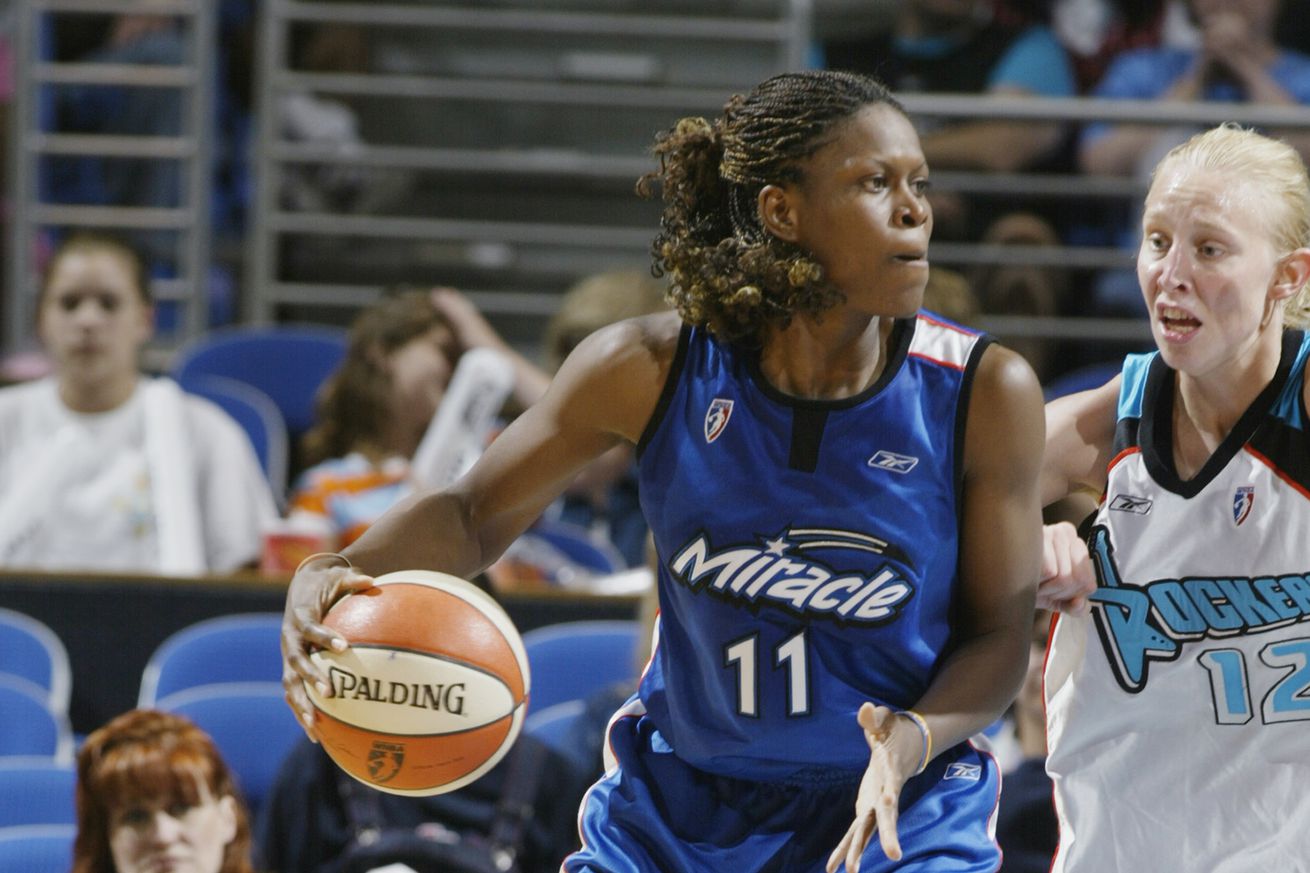 The accolades won by Taj McWilliams-Franklin — two-time champion, two-time All-WNBA and six-time All Star — belie her underdog backstory. She navigated numerous challenges throughout her three-decade professional basketball career, making her an ultimate underdog in women’s basketball.

The WNBA’s first generation of players was all underdogs.

In the late 1980s and early 1990s, American women’s basketball players plied their trade across the globe, all while holding out for the promise of a professional league in their home country. When this promise finally was realized with the founding of the ABL and WNBA, uncertainty remained, as demonstrated by the failure of the ABL and the folding of multiple WNBA franchises. Nevertheless, these women persisted to establish the viability of women’s professional basketball in the United States.

Of this founding generation of underdogs, Taj McWilliams-Franklin was the ultimate. Her three-decade career exemplifies the challenges women often navigate to sustain success in professional basketball.

However, her professional basketball journey did not start in East Tennessee, Northwest Louisiana or Southern California. Instead, her post-secondary basketball career false-started at Georgia State in downtown Atlanta. And when the head coach who recruited the Augusta, Georgia, native was let go, McWilliams-Franklin found herself unwanted because the new head coach did not accept athletes with children.

St. Edward’s University, an NAIA school in Austin, Texas, the city where her mother lived, would serve as McWilliams-Franklin’s new college basketball home, offering her a partial scholarship that she supplemented with loans. To sustain her basketball career while surviving her academic and everyday obligations, McWilliams-Franklin gave Schera up for adoption.

“[It was] the best thing for her,” she later reflected. “I was going to St. Edward’s, taking out loans to pay for an apartment, lights, food, school, clothes, bus transportation. I had to make it stretch.”

Despite these stresses, McWilliams-Franklin excelled on the court, attracting the attention of Division I programs. Yet, appreciative of the opportunity, McWilliams-Franklin stuck with St. Edward’s. “After my first year when I did so well, I could have gone somewhere else, transferred to a D-I, but I felt loyalty is rewarded with loyalty,” she recalled.

She was named 1993 NAIA Player of the Year her senior season.

Roaming and raging to play

In need of money to finish school and support her family, McWilliams-Franklin headed overseas. She played in Wolfenbüttel, Germany (1993-94), Contern, Luxembourg (1994-95) and Galilee, Israel (1995-96), all with Michele in tow.

Hooping in far-flung locales did not strain her love for the game, instead confirming that basketball was the career she wanted. “The first time I stepped on the court in a pro game, I knew this was the way I wanted to make a living,” she later told Florida’s St. Petersburg Times. “I think I’ll keep playing until I lose that feeling.”

Soon thereafter, it seemed McWilliams-Franklin’s perseverance would pay off. A professional women’s basketball league, the ABL, was established in the U.S. in 1996. After participating in a combine for prospective players, she was selected by the Richmond Rage in the inaugural ABL Draft with the 40th overall pick.

This successful season did not secure the Rage a permanent place in the Richmond sporting landscape. The team was relocated to Philadelphia, giving McWilliams-Franklin another new basketball home.

After an underwhelming 1997-98 season, the Rage folded early in the 1998-99 season. McWilliams-Franklin, thus, traveled overseas, this time to Greece. Frustrated, she later suggested to the St. Petersburg Times: “I really thought my career (in the U.S.) was over … I thought maybe I didn’t even want to play in the United States.”

A miraculous basketball match in Orlando

McWilliams-Franklin took another shot at making a roster in the WNBA by attending the 1999 combine. Despite her documented success in the ABL, however, she remained available until the third round, when the Orlando Miracle, an expansion team, selected her with the 32nd pick.

In a fitting match, one of women’s basketball’s ultimate underdogs would join an unquestionably underdog expansion team.

“I didn’t think it would be me,” McWilliams-Franklin told the Orlando Sentinel. “I was ready to set a pick, but they gave me the ball, and I was going to take it to the hole.”

McWilliams scored 23 points in that game, shooting an efficient 8-of-11 from the field.

Throughout the season, the Miracle hung around .500, defying expectations. “They said we’d be a step-above the cellar in the East,” McWilliams-Franklin told the Orlando Sentinel in a midseason interview. “That motivated us.”

McWilliams-Franklin was named an Eastern Conference All-Star reserve along with teammates Nykesha Sales and Shannon Johnson.

The Miracle finished 15-17 for the 1999 season. In 2000, Orlando would establish itself as a legitimate playoff contender driven by an ever-determined McWilliams-Franklin.

As the fulcrum of the Orlando offense, she turned in one of the most productive offensive seasons of her career, averaging nearly 14 points per game on better than 52 percent shooting. Fans showed appreciation for McWilliams-Franklin’s play, voting her in as an All-Star starter — an honor that confirmed the underdog had become one of women’s basketball’s elites.

“I’m not one with name status or I never thought I’d be a big endorsement or big-time name,” McWilliams-Franklin told the Sentinel.

The Miracle also would earn a playoff berth and meet the Cleveland Rockers in the first round. The lower-seeded Miracle stole Game 1, powered by a perfect McWilliams-Franklin, who made all seven of her field goal attempts. Yet, the road woes that had bedeviled Orlando all season stalled a deeper playoff run. The Miracle dropped Games 2 and 3 of the three-game Eastern Conference Semifinals.

For McWilliams-Franklin, overall on-court success was accompanied by off-court stability.

While playing abroad in Italy during the WNBA offseason, McWilliams-Franklin met Reggie Franklin, an Army sergeant. In December 2000, they were married, and three years later, they gave birth to a third daughter, Maia. With Reggie willing to serve as the primary parent, McWilliams-Franklin appeared to have found the balance needed to fulfill her hooping dreams and familial desires. Yet, as she would later share with the New York Times, it wasn’t easy.

“It’s a Catch-22,” she said. “Women love their careers and they love their families. Sad as it is, you have to give up something of one or the other in order to be good at one.”

All the more, the precariousness of women’s professional basketball presented her with additional difficulties. After the 2002 season, the Orlando Miracle would become the Connecticut Sun, making Uncasville, Connecticut, McWilliams’ new basketball home.

Triumphs and trials for the journeywoman

McWilliams-Franklin would spend four seasons as a Connecticut Sun, a time that would cement the underdog’s reputation as a winning player.

In 2004, Connecticut advanced all the way to the WNBA Finals, where they fell 2-1 to the Seattle Storm. In 2005, the Sun were even better, with the fantastic foursome of McWilliams-Franklin, Sales, Lindsay Whalen and Katie Douglas pushing to a league-best 26-8 record.

McWilliams-Franklin also collected individual honors in 2005, securing her third All-Star selection and being named to the All-WNBA Second Team. However, the ultimate achievement — a championship — eluded McWilliams-Franklin and the Sun. They again came up short, losing the WNBA Finals 3-1 to the Sacramento Monarchs.

The 2006 season followed a similar script. At 26-8, the Sun again had the WNBA’s best record. McWilliams-Franklin again earned All-Star and All-WNBA Second Team honors. Yet, more disappointingly, Connecticut fell to the Detroit Shock in the Eastern Conference Finals.

So, for all the success that McWilliams-Franklin had attained, she still remained an underdog because her teams were unable to break through and earn a title. To continue her quest for a championship, she would have to journey elsewhere.

Ahead of the 2007 season, McWilliams-Franklin requested a trade to the Los Angeles Sparks, with the opportunity to live and play in L.A. best meeting the needs of her family at that time. Although she had turned in another All-Star season, another cross-country journey was in her future. The next offseason, she was traded to the Washington Mystics. Then, at the 2008 trade deadline, the Detroit Shock sought McWilliams-Franklin’s services for the playoff run.

The underdog pushes the Shock over the top

In the Motor City, all this movement would pay off, with McWilliams-Franklin proving the perfect booster for the Shock. After adding McWilliams-Franklin, Detroit finished the season 12-3 and, most importantly, won the WNBA title.

The Shock envisioned serving McWilliams-Franklin as a role player, supporting stars Katie Smith and Deanna Nolan. Soon after her arrival in Detroit, she told the Ocala Star-Banner:

For the past couple years, I’ve been on young teams where I’ve been expected to be the leader for a lot of young players. It’s been a nice change to be on a team where I’m just one of the veterans — where I have so many great players surrounding me.

In Game 3 of the Eastern Conference Finals, McWilliams-Franklin added 19 points and eight rebounds, pushing the Shock past the Liberty and sending them back to the WNBA Finals. In Game 3 of the Finals, she spurred the Shock to their championship-clinching victory, going on a personal 4-0 scoring run with approximately four minutes remaining to give the Shock an insurmountable double-digit lead.

This satisfying on-court triumph was preceded by a rewarding off-court reunion.

In 2007, McWilliams-Franklin reconnected with Schera, re-establishing a relationship with the then-Shawnee State University basketball player. “I’m happy I’ve been able to have some impact on her life,” McWilliams-Franklin told ESPN of Schera’s willingness to welcome her into her life. “When I gave her up, I never thought I’d see her again. A little piece of heaven came back.”

Seemingly, McWilliams-Franklin might have decided to retire after the 2008 season, completing her unexpected, underdog career with a championship. Yet, as she asserted soon after beginning her professional career abroad, McWilliams-Franklin was determined to play as long as possible.

As an indication of her obsession with the game, McWilliams-Franklin continued to play abroad throughout her WNBA career, suiting up in Italy, South Korea and Russia. After another WNBA season in Detroit and single season with the New York Liberty, Cheryl Reeve, who had been an assistant coach with the Shock, lured McWilliams-Franklin to the Minnesota Lynx.

Ahead of the 2011 WNBA season, a rather unremarkable Minnesota team added two very different yet equally important talents — a seemingly guaranteed superstar in the much-heralded rookie Maya Moore and the 40-year-old, over-achieving basketball lifer in McWilliams-Franklin. Combined with Seimone Augustus, Lindsay Whalen and Rebekkah Brunson, the Lynx coalesced into a championship contender.

In full ‘“Mama Taj” mode, McWilliams-Franklin provided sturdy, veteran leadership for an organization with a losing reputation. She embraced this role, telling the Minnesota Star Tribune, “My focus isn’t on stats anymore like it was when I was younger. It’s more about helping, giving something back for all of the great stuff I’ve been given. It’s just moment to give something back.”

Her experienced play also proved pivotal. “She’s very crafty at getting her hands on the ball on the defensive end,” Seimone Augustus told the Star Tribune. “And on the offensive end, she takes her time. I think it really messes a lot of young players up because she doesn’t make a quick move.”

With McWilliams-Franklin manning the back line, the Lynx captured the 2011 WNBA title and appeared poised to add a second in 2012, until a GOAT and her pack of underdogs — the Tamika Catchings-led Indiana Fever — ruined the repeat.

Somewhat ironically, McWilliams-Franklin, the longtime underdog, decided to call it quits right after she was no longer the underdog, but a member of the top dog squad that suffered an upset.

McWilliams-Franklin retired from the WNBA at age 41 after the 2012 season. She would play one more season abroad, joining Clube Amigos do Basquet in Spain in 2013-14.

In total, her professional basketball career, which spanned over 30 years, was a testament to perseverance.

“We’re all destined to have tough times in our lives,” McWilliams-Franklin said before her retirement. “Some of us have to get through a lot of messy stuff. But things change, and you can decide you’re going to be greater than whatever the messy stuff is.”