Teams that lost the most, patched up the best 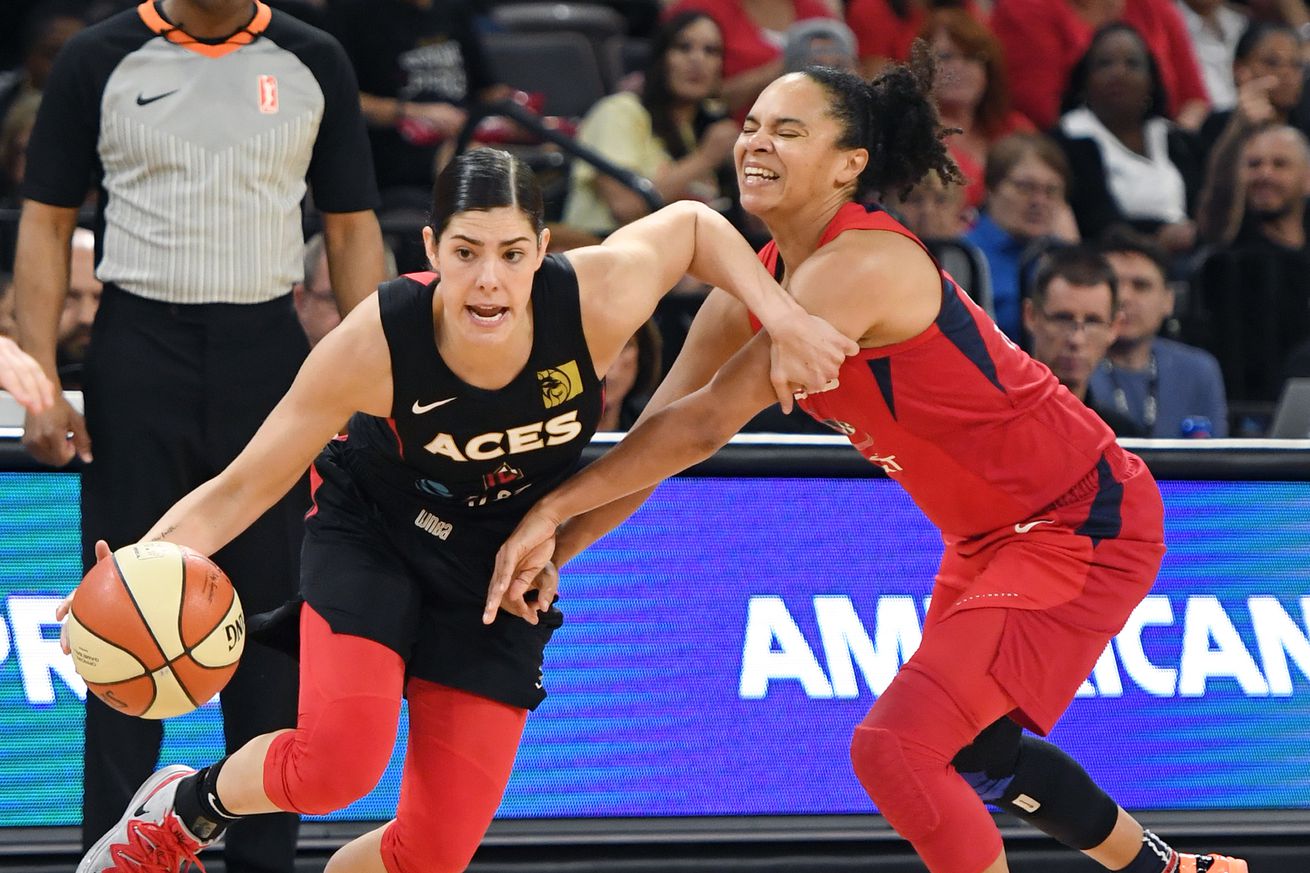 Kelsey Plum (left) and Kristi Toliver (right) are important guards to the Aces and Sparks, respectively. Whatever will those teams do without them? | Photo by Ethan Miller/Getty Images

Seven teams have been hit hard by opt-outs, medical exemptions and injuries leading to tipoff of the 2020 WNBA season. Three teams have avoided losses, and the Phoenix Mercury and Minnesota Lynx have suffered minimal damage.

With all the issues swirling around the country right now, the WNBA—like the rest of society—has been in a state of constant change. As the 2020 WNBA season barrels towards its delayed and bubbled start, here’s a look at the teams most compromised by opt-outs, medical exemptions and injuries since the roster finalization date on May 26:

Ranking the teams that lost the most talent

When Tina Charles announced that she had been medically excused from the season due to a preexisting health concern (extrinsic asthma), the Mystics moved to the top of this list. Elena Delle Donne, though denied a medical exemption, is likely to opt out because of her preexisting health concern (Lyme disease), leaving the defending champions with an uphill battle to make the playoffs.

Delle Donne could still rejoin the team at any time if she wants to, but Mystics coach Mike Thibault said the following in a Zoom call on Sunday:

Tina Charles is a superstar and at age 31 is still at the top of her game. The combination of her and Delle Donne would have given Washington a good chance at repeating for the title.

Starters in 2019, Natasha Cloud and LaToya Sanders back in June were among the first WNBA players to opt out of the 2020 season. Cloud (social justice reform) is an underrated playmaker, and both she and Sanders (health precaution) were key members of Washington’s 2019 championship rotation.

Meanwhile, Cloud could have been on her way to earning her first All-Star honor (though All-Star Weekend was not planned for 2020 due to it being an Olympic year).

Assuming Liz Cambage opts out of the 2020 season as expected due to a health precaution, Las Vegas will be without one of its two best players. That leaves A’ja Wilson, now in her third year, with the task of leading one of the best teams in the WNBA.

Las Vegas was arguably the front-runner to win it all as of the roster finalization deadline on May 26. Losing Cambage, however, would drop them below the talent level of the 2018 champion Seattle Storm, who now have Breanna Stewart, who missed the 2019 season due to a torn Achilles.

To make things worse, Kelsey Plum, a steady starter from last year, tore her Achilles in June and will miss the entire season.

The Aces are lucky to have added veteran Angel McCoughtry, who adds “superstar depth” and should complement Wilson and sharpshooter Kayla McBride with her driving ability. And let us not forget the two-way impact of Sixth Woman of the Year Dearica Hamby.

Due to their top-to-bottom depth, Vegas should still be one of the top teams in the league this season but losing Cambage, a 6-foot-8 versatile center, is colossal.

With star Chiney Ogwumike sitting the season to rest her body from previous injuries, and two-time championship contributor Kristi Toliver sitting out as a health precaution as well, the Sparks, like the Aces, have moved below the Storm in the WNBA pecking order.

Ogwumike is still on the rise at age 27, while Toliver has made the past two All-Star Games and still has a lot to offer at age 33. Without them, though, L.A. returns Candace Parker and Nneka Ogwumike, two of the best players in the league. Also like the Aces, the Sparks are still better than most teams in the WNBA, even without key players.

Point guard Chelsea Gray, a budding superstar in her own right, will lead a backcourt that features Brittney Sykes and Riquna Williams, while Reshanda Gray will do her best to replace Chiney Ogwumike. Sykes and Williams would have been key rotation players anyway. Now, they will just get more playing time now that Toliver is out.

It’s certainly difficult to go from worst to middle of the pack in one year but the Dream had potential to become a playoff team this year. But without opt-outs Tiffany Hayes (unspecified reasons) and Renee Montgomery (social justice), the Dream lack both the experience of Hayes and Montgomery as well as a single great superstar.

Wild card rookie Chennedy Carter could turn into that star with support from new acquisitions Glory Johnson and Courtney Williams, plus consistent leader Elizabeth Williams. Still, the loss of Hayes and Montgomery creates issues with depth.

Jonquel Jones, who decided not to play as a health precaution, is the lone member of the Sun who will be sitting out the 2020 season. But, coupled with those who departed in free agency — Williams and Shekinna Stricklen —she is a major loss.

Jones was in the MVP conversation last year and she was the best player on a team that was the league’s runner-up. In her sophomore season of 2017, she averaged career bests is scoring and rebounding with 15.4 points and 11.9 boards per game and made her first All-Star Game; she returned to the All-Star Game in 2019 and finished with a regular-season average of 14.6 points and 9.7 rebounds per game. Her ability to shoot from distance as a 6-foot-6 center can only be replaced by a handful of women in the league.

The Sun’s DeWanna Bonner (a 6-foot-4 versatile forward who can play any position and nail 3-pointers) comes close, but Connecticut, like Washington, may have to battle to make the playoffs after making the Finals in 2019.

The Liberty may end up being the last place team in the league this year, especially since they lost two of their six non-rookies in Rebecca Allen (health precaution) and Asia Durr, who was diagnosed with the coronavirus in June. Durr was a solid contributor in 2019 after being selected at No. 2 overall in the draft, while Allen chipped in 7.2 points on average despite playing only 17.2 minutes per contest. Durr was expected to make a huge leap this year while playing alongside rookie passing phenom Sabrina Ionescu, who was the No. 1 overall pick in the 2020 draft. Other teams have lost more talent than New York has, but the Liberty are now clinging to a small amount of hope of making the playoffs.

Jantel Lavender was going to be a key player for the Sky this year but is now recovering from foot surgery. Like the Liberty, Chicago has less to complain about than some teams. Like the Dream, however, the Sky were on track for strong playoff contention in 2020 and now see some bumps ahead.

With Lavender out, Chicago’s prospects for a first-round bye could end up a fight for the eighth playoff spot.

The Mercury’s Jessica Breland, who spent the last two seasons in Atlanta, is a Hodgkin’s lymphoma survivor and has been medically excused from the 2020 season. A solid rebounder with eight years in the league, Breland has averaged 7.3 points per game for her career and was on track to play significant minutes even if Kia Vaughn started in her place for size. Phoenix should still be a playoff team without her though.

Forward Cecilia Zandalasini is sitting out the 2020 season as a health precaution. The 24-year-old native of Italy averaged 5.7 points in 16.5 minutes per game with Minnesota in 2018 before missing the 2019 season. The loss doesn’t greatly affect the Lynx’s status — they should be in the mix by the playoffs.

These teams patched up the holes with the following additions:

Some of the teams on this list besides Vegas and L.A. will make the playoffs but they are the only two that should be locks. Meanwhile, the Storm may have returned to top-team status. If there is a bold prediction to be made out of all this, it would be that the Dallas Wings and Indiana Fever could both be in the mix for playoff byes unless they too have players needing to miss significant time. The Fever had two unnamed players test positive for the coronavirus and their status is not yet known.