The burdens of basketball, bubbles and Blackness 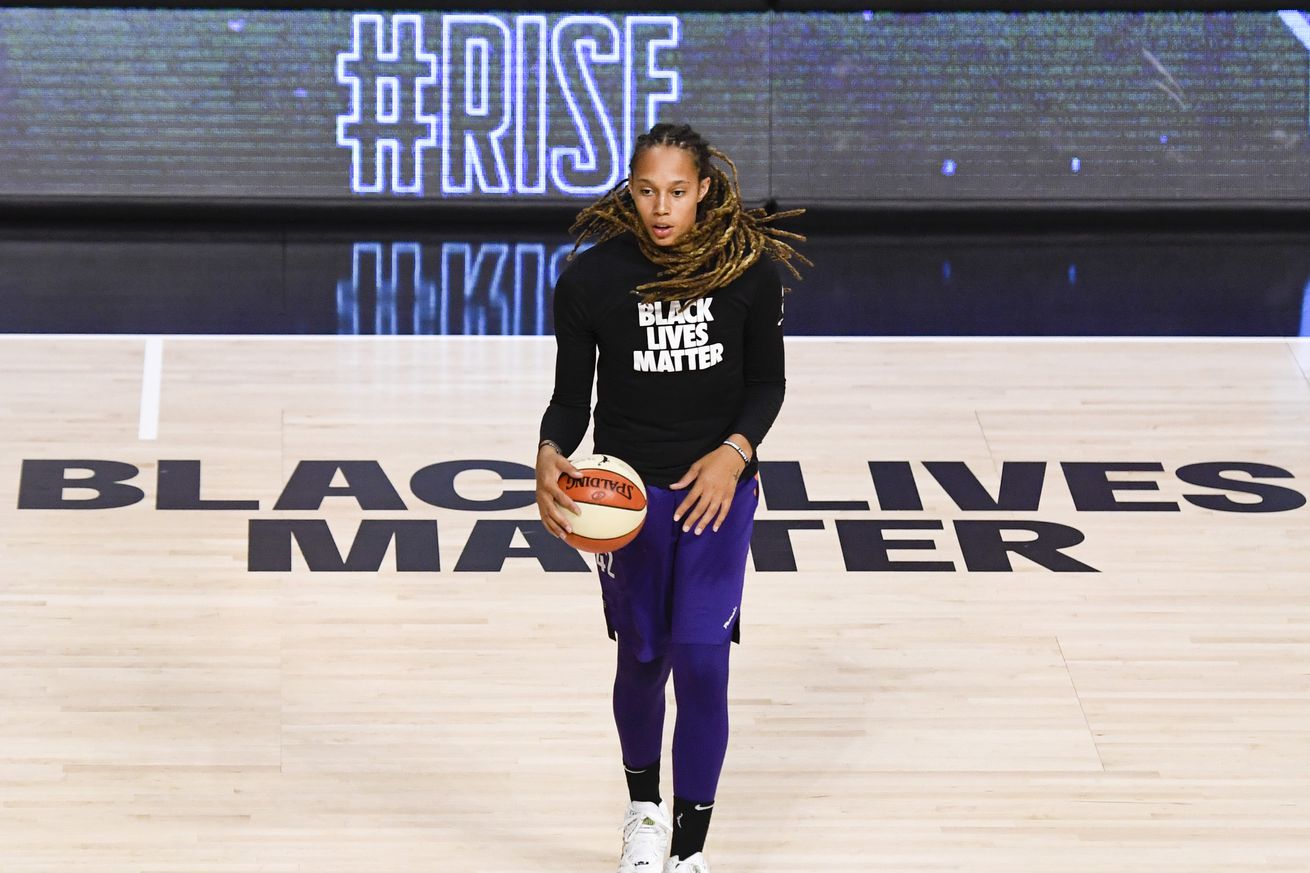 It is understandable that Brittney Griner and other Black players in the WNBA may need to leave the bubble of IMG Academy in Bradenton, Florida, to care for their mental and emotional well-being. | Photo by Douglas P. DeFelice/Getty Images

WNBA players have dedicated the 2020 season to social justice. The energy they are putting into initiatives for change can take an emotional toll, especially for Black players. Last week’s departure of prominent players for personal reasons is understandable.

No one would argue that players’ efforts have not been successful: They have expertly used their platform to center the names, faces, lives and interests of women of color engaged in the fight for justice and equality.

Please join us in fighting for justice for Breonna and contact Attorney General Daniel Cameron (@DjayCameron) and demand Breonna’s killers be arrested.

All the while, the cops who killed Breonna Taylor still have not been arrested.

While the wubble has protected players from COVID-19, it cannot protect them from the pain caused by state-sanctioned anti-Black racism. In fact, the monotonous, isolating conditions at IMG Academy more likely intensify feelings of despair and depression caused by repeated incidents of police brutality against Black Americans.

The emotional challenges of being a Black athlete in 2020

It makes sense that WNBA players, more than 80 percent of whom are Black, would need a break from basketball. On Wednesday, the players joined their NBA brothers in protest following Blake’s shooting and elected not to play. On Thursday, they observed “a day of reflection, a day of informed action and mobilization.”

“This is not a strike. This is not a boycott. This is affirmatively a day of reflection.”@Nnemkadi30 reads a statement from the WNBA players: pic.twitter.com/6Sq4nRoMjo

It also makes sense that, for some players, this two-day pause might not be enough to meet their mental and emotional needs. For some, it might be necessary to leave the bubble to better cope with the burdens of Blackness in a society rife with anti-Black racism.

The reasons for Griner’s and DeShield’s departures rightfully remain private.

The burdens of the bubble, especially for Black players

Although their decisions may be unrelated to the mental and emotional effects of racial injustices, their departures do raise awareness of this possibility. While we applaud players for using their platform, it also is important to recognize the pressures and pains they are navigating.

On a recent episode of NBA player JJ Redick’s The Old Man and the Three podcast, Sue Bird, who is white and has extensive experience playing in Russia and other unfamiliar locales, discussed the challenges of the bubble’s conditions:

I think the hardest part is there’s no escape. There’s just literally no break; you cannot get away from basketball. So, if you’re the type of person that thinks about it a lot or that needs that. And, actually, what I think I’ve found in this experience is I am that person. I don’t think I understood that — how much I actually get away from it…You literally just can’t get away…It’s tough.

For Bird, devoting time and energy to social justice efforts, such as organizing the league’s endorsement of Rev. Warnock, can serve as an invigorating opportunity to detach from the game.

I am proud of these players. Thank you for connecting the dots between social justice & voting. @ReverendWarnock is one of the bright stars vying to for U.S. Senate in Georgia – he’s got this. https://t.co/w6nAFG0p6K

Black players don’t have this luxury. As Layshia Clarendon shared with ESPN regarding the Loeffler situation:

We were having internal conversations about how to keep approaching the Kelly Loeffler stuff. And [union president] Nneka [Ogwumike] and I both were like, “Sue, as a white ally, you have to take this on. We can’t muster any more of this. It’s too hurtful.” The weight of experiencing this as a Black player is different than Sue experiencing it as a white player. The stuff [Loeffler] said is just ridiculously hurtful, even if you haven’t played on her team, just calling people “mob rule” and all that.

In the NBA, even LeBron James, who consistently has insisted that he can best advocate for change while chasing another championship, admitted to longing for an escape, telling reporters, “I’ve had numerous nights and days where I’ve been thinking about leaving the bubble. I think everyone has, including you guys.”

Nike’s newest ad claims, “You can’t stop sport. You can’t stop us,” invoking the idea that athletes across sports persevere and persist for a greater good, both in the arena and outside of it.

Nothing can stop what we can do together. You can’t stop sport. Because #YouCantStopUs.

Yet sometimes, sport needs to stop because the athletes need to pause, breathe and maybe step away. Although it is excellent that athletes, especially WNBA players, want to make “actionable” change, as Commissioner Cathy Engelbert has emphasized in multiple recent interviews, it also is okay if these players need the time and space to just be.

Ariel Atkins might have said it best, telling EPSN’s Holly Rowe, “At the end of the day, I’m going to make sure that my family is good and if basketball is not it…that’s what it is. But we need to understand that these moments are so much more bigger than us.”

“We’re not just basketball players. We’re so much more than that.”

Ariel Atkins with a powerful statement on the unified decision to not play tonight. #BlackLivesMatter pic.twitter.com/Eg96KMqsFh