The most fascinating freshmen faceoffs 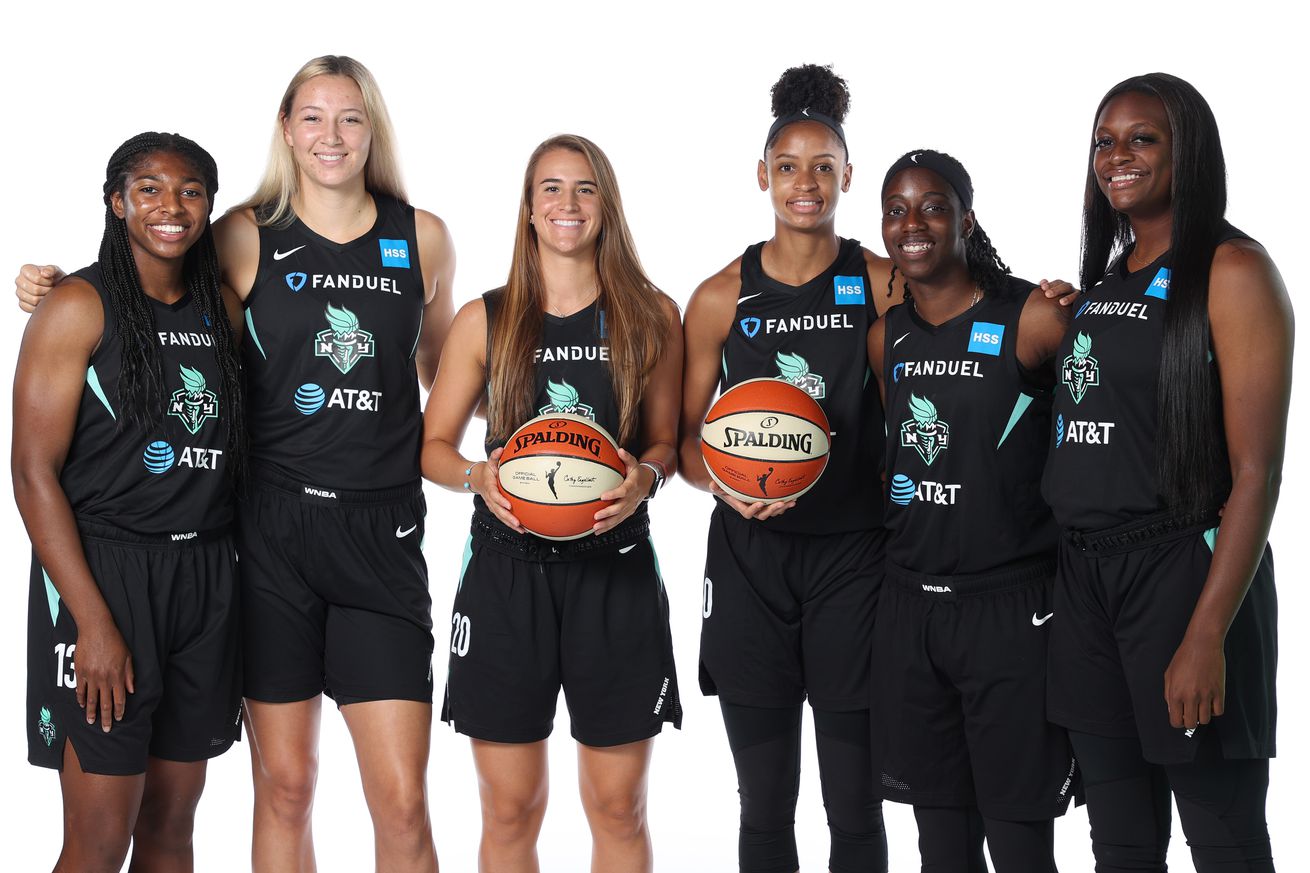 The WNBA’s 2020 draftees will, finally, make their debuts this weekend. Over the course of the season, the rooks will meet other rooks, striving and sometimes thriving on the courts at IMG Academy. Which first-year faceoffs inspire the most fascination? Hint: A lot of Liberty is involved.

The WNBA’s rookies will make (or hope to make) their debuts this weekend, beginning on Saturday, July 25 at noon when No. 1 pick Sabrina Ionescu and the five other rookies on the New York Liberty in Bradenton take on the Seattle Storm and their lone rookie Ezi Magbegor, who is joining the Storm after she was drafted with the No. 12 pick in 2019.

The very different expectations on Ionescu and Magbegor capture the spectrum of the rookie experience.

Ionescu will be at the center of everything the Liberty do, given the opportunity to stumble, struggle, showoff and shine throughout the 22-game regular season at IMG Academy.

Magbegor, in contrast, likely will not see significant or consistent action on deep, veteran Seattle team with its sights on the championship chase.

Like Ionescu and the Liberty’s other fresh faces, the three rooks on the Dallas Wings — Satou Sabally (No. 2), Bella Alarie (No. 5) and Tyasha Harris (No. 7) — should get the chance to contribute. Because the Atlanta Dream will be without several of their high-usage offensive players, Chennedy Carter, the fourth selection in this year’s draft, should frequently have the ball in hands (and should frequently put the ball in the basket).

However, similar to Magbegor, other WNBA freshmen on vet-heavy teams, such as the Connecticut Sun’s Kaila Charles (pick No. 23), Beatrice Mompremier (snagged by the Los Angeles Sparks at No. 20 before she was waived and signed by the Sun), and the Sparks’ Te’a Cooper (originally drafted by the Phoenix Mercury with the 18th pick) may be relegated to the end of the bench more often than not.

Additionally, the uncertainties caused by coronavirus has raised questions about the rookie seasons of some. The New York Liberty’s Megan Walker, selected at the No. 9 spot, tested positive for COVID-19 and has yet to join her teammates in Bradenton. The status of No. 3 pick Lauren Cox also is undetermined, as she is not with the Indiana Fever at IMG Academy.

Although some first-year players are certain to surprise, the likely allocation of opportunity makes some rookie matchups more intriguing than others. Here are the three freshmen faceoffs that most excite.

Both of these rookie-laden teams make more than one appearance on this list. But the two matchups between New York and Dallas are most interesting for multiple reasons.

First, Liberty vs. Wings means Sabrina Ionescu vs. Satou Sabally. While the games between the No. 1 pick and No. 2 pick always intrigue, that this year’s top-two picks were college teammates increases the appeal. Although they will not be each other’s primary matchup, it will be fun to see what happens when they get switched onto each other. If Ionescu finds Sabally on her, will she try to dust her fellow Duck and drive to the hoop? Or, will Sabally hold her own, using her athleticism to successfully stall Ionescu’s efforts? In the reverse situation, can Ionescu prevent Sabally from powering past her?

However, Ionesu is more likely to find herself facing Ty Harris. This will be the realization of a point guard matchup that was denied due to the coronavirus, as the cancellation of the college basketball season prevented a possible Oregon vs. South Carolina national title tilt.

Do your thing, rook! @TyHarris_52 went off tonight vs. Phoenix.

Some of the Liberty’s other rookies may be tasked with slowing Sabally. The Liberty’s No. 15 pick, Leaonna Odom, possesses the athleticism, length and instincts needed to foil her. The physical Jocelyn Willoughby, acquired via a draft night trade after the Mercury selected her with the No. 10 pick, and the shot-blocking Kylee Shook, New York’s No. 13 pick, also could be called on to stymie Sabally, They also may be charged keeping the strecthy, sharpshooting Bella Alarie from getting clean shots.

As with their matchups with the Liberty, the Wings’ meetings with the Lynx present several, scintillating rookie-centric storylines.

Seeing the heart and soul of the South Carolina Gamecocks — Ty Harris and Mikiah Herbert Harrigan — on opposite sides of the should not only attract the interest of Dawn Staley and the FAMS in Columbia but also the attention of the wider world of women’s hoops.

Love our Garnet and Black, but these new colors look good on @2121Mikiah and @TyHarris_52 pic.twitter.com/rBj7yXOxeD

After the Lynx took Herbert Harrigan with the No. 6 pick, Harris declared that “she shocked the world.” Herbert Harrigan then shared excitement for Harris, noting, “It was great seeing Ty get called after me.”

While the friendship-infused faceoff intrigues for reasons that extend beyond the court, different rookie matchups will attract more analysis once the ball is tipped.

The battle between Herbert Harrigan and Sabally will offer another perspective of the Oregon-South Carolina showdown that wasn’t. It should be a thrill to watch Herbert Harrigan, a determined defensive disruptor, attempt to stop Sabally and her versatile offensive game.

Lynx vs. Wings also could feature a duel between the 2020 rookie class’s top-two pure point guards, with Harris and Crystal Dangerfield testing their mettle against each other.

Dangerfield, somewhat unexpectedly, dropped to the second round and 16th pick, giving the former UConn floor general with a sweet 3-point stroke plenty of motivation to ball out against the point guard taken nine spots ahead of her in the draft.

Unsurprisingly (and deservedly), Sabrina Ionescu is the favorite to win the 2020 Rookie of the Year award. However, Chennedy Carter may have the best chance to steal the award. Sue Bird thinks so.

Putting on a show against Ionescu and the Liberty certainly would help her case.

Everyday is a good day when you get that #ChennedyChontent Enjoy some @ChennedyCarter highlights pic.twitter.com/bSmE91q4A3

But more than the potential Rookie of the Year race, the matchup between Ionescu and Carter will present a contrast in modern point guard styles.

The NCAA’s triple-double queen, Ionescu is a threat on or off the ball, able to make her teammates better through her prescient passing and her mere presence. Carter, on the other hand, is called “Hollywood” for a reason. She can operate as an offense unto herself, with the proven ability to pour in the points on some of the world’s best players.

Another Liberty rookie, No. 12 draft pick Jazmine Jones, also can get in on the bucket getting action. And, if shots aren’t falling, the Liberty’s Joyner Holmes, signed after she was drafted 19th but then waived by the Storm, could do battle on the boards against the Dream’s Brittany Brewer, selected 17th in the draft.

Other WNBA rookies will seek to make their names over the course of this unprecedented, unique 2020 season. Which freshmen faceoffs are you most looking forward to?