The Pride, power and purpose of WNBA players 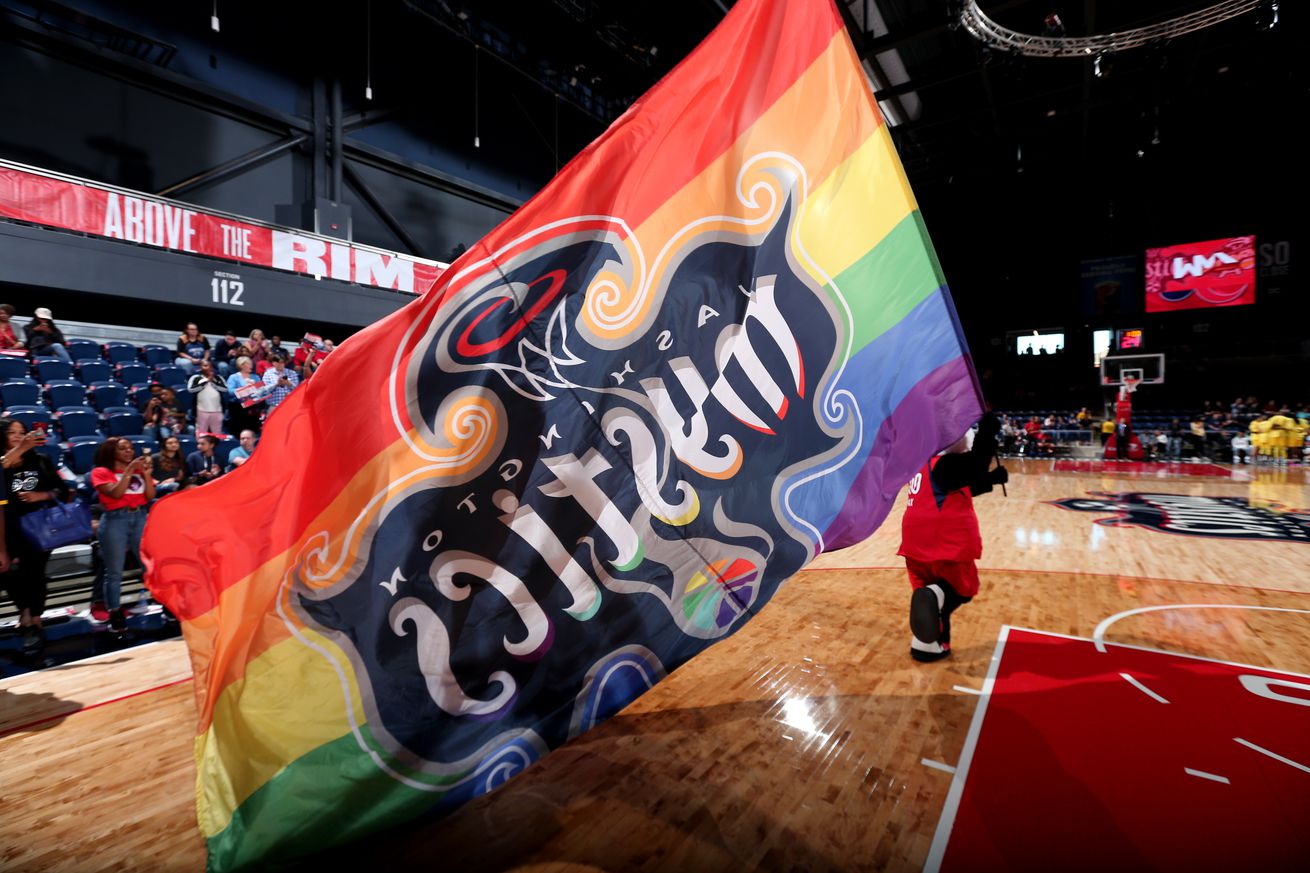 The Washington Mystics celebrate Pride Night during the 2019 season. | Photo by Ned Dishman/NBAE via Getty Images

In 2014, the WNBA became the first pro sports league to establish a formal Pride campaign. Since then, the league’s players not only have deepened the WNBA’s commitment to LGBTQ+ identities and issues, but have expanded the boundaries of activism intersectionally.

We have been marching to this for a very long time. As far back as I can remember, we’ve had outreach to the LGBT market. We are building on something that previously existed; this isn’t a case of a marketing initiative starting 100 percent from scratch. Part of the work we’ve been doing across the league is to really crystallize our platform, bring a visual element to it, and work very hard to create integration and collaboration between events at a league level and team level.

In short, the WNBA was “coming out,” organizing preexisting, team-level fan initiatives into a formal, publicized league-wide LGBTQ+ fan appreciation campaign. “We’re very proud of WNBA Pride, in part because it not only is designed to appeal to a segment of our audience, but it also is very consistent with the values of the WNBA — being all about diversity and inclusion,” Richie clarified.

Only now that the coast is clear has the WNBA decided to publicly embrace its gay fans. The gesture deserves two slow claps, considering how long it took. The league could have done this sooner, and helped changed the sports world; instead, it’s merely taking advantage of a changed world.

From the perspective of June 2020, it is easy to celebrate this progress. While it took 18 years for the WNBA to find its “pride,” the past six years have seen Pride and a wider spectrum of LGBTQ+ issues become intrinsic to the character and culture of the W.

However, in recognizing this acceleration of inclusivity, it is worth drawing a distinction between the league and its players. Notably, Richie cast the league’s Pride initiative as about the WNBA’s lesbian, gay, and gender non-conforming fans; she was silent about its players.

Yet, in the intervening six years, it’s the WNBA’s players who have made an acceptance of alternative sexual and gender identities part of the league’s fabric. Furthermore, WNBA players are not just following social and cultural changes; they are at the forefront of that change. And most importantly, WNBA players have increasingly used their platforms to advocate for an intersectional equality, crossing and combining lines of gender and sexuality, as well as race, to help to realize, in the words of WNBPA President Nneka Oqwumike, “the kind of world we want to live in.”

“The @PhoenixMercury & the #WNBA is a place where anybody & everybody is accepted & welcomed. For us to celebrate that lets our fans & everybody know that this arena, this house, is a safe zone. PRIDE to me is just being yourself and being who you are.” -BG pic.twitter.com/BTOeo3fzTM

Griner, however, should give herself credit for helping make the WNBA “a place where anybody and everybody is accepted and welcomed.”

While not the first WNBA player to publicly identify as gay (that would be Sue Wicks), Griner was the first player loudly, proudly to announce and advertise her identity. As Kate Fagan described the No. 1 pick in the 2013 WNBA Draft, “Now, the real Griner is appearing as if in Technicolor 3-D, shouting her truth to the rafters.”

In 2018, Sue Bird told the AP’s Doug Feinberg, “I saw the reaction [Griner] got and it helped me with my decision [to publicly come out]; I think the higher profile somebody is, the more normal it becomes for other people who aren’t comfortable with the idea themselves or are familiar with it. It just normalizes it.”

I’ve never won anything alone, and I’m not starting now • At every step I’ve had my people with me, and together we’ve done what it takes to make progress in ways that once felt impossible • Inspired by the dedication of my community, including icons like Gilbert Baker who created a symbol to unite this movement, I’m proud to add to a legacy of athletes who are true to their game no matter what stands in the way. #BeTrue #UntilWeAllWin

Critically, WNBA players do not present a universal LGBTQ+ image.

As Clarendon articulated to Spruill, WNBA players possess “layers on top of layers” of identities. In a 2015 essay in The Players’ Tribune, Clarendon peeled back her layers for readers, writing, “I identify as black, gay, female, non-cisgender and Christian. I am an outsider even on the inside of every community to which I belong. My very existence challenges every racial, sexual, gender and religious barrier.”

It’s officially Pride month people!!! This month is about so much more than just buying rainbow products. Pride parades began the year following the Stonewall Riots. The riots happened at the end of June in 1969 and were a protest against police violence towards the LGBTQ community. We honor the folks who came before us and fought like hell so we could live in a safer world today. We also acknowledge the world still isn’t all that safe for a lot of queer people. Such as our youth, Nigel Shelby. Communities can be a war zone particularly for our trans women of color. We celebrate this month by, yes buying some rainbow things, but also realizing that it’s about education and always including an intersectional lens in our fight. I love rainbows and will be posting hella gay things per usual. So cheers to those collective closet doors getting kicked off the freaking hinges. Out came balloons, fairy dust, unicorns, & rainbows. So I say it loud I’M GAY BLACK AND PROUD!!! ✊ #PrideMonth #HellaGay #AllDay #CantStopWontStop #GodLovesTheQueers

So while it is satisfying to say that, “Love is love,” and, finally, “Rights are rights,” the ability of a LGBTQ+ person to realize love or access rights is still determined by how all their identities — not only gender, sexuality and race, but also color, creed, age and ability — intersect.

WNBA players have increasingly injected this intersectional urgency into advocacy and activism, highlighting how the effort for gender and sexuality equality is entwined and implicated with — and therefore must also attend to — other identity-based social justice issues.

Clarendon, for example, has become a powerful spokeswoman for trans rights. Even issues that at first seem irrelevant to matters LGBTQ+ equity, such as gun control, also present an opportunity to expand the purview of PRIDE to include all the “layers on top of layers.”

Following the mass shooting at Orlando’s Pulse nightclub in June 2016, the WNBA and its players organized to express solidarity with the Orlando gay community. Breanna Stewart auctioned off multiple pairs of shoes to benefit the victims of the massacre.

We are all a part of something bigger. It’s important to remember the names of the people who lost their lives as we all try to search for answers and solutions. #Enough We Are One.

Just as importantly, Stewart also insisted, “The one-time gesture is nice, but what’s going to happen beyond that? That’s what we’re trying to figure out. You can’t just wear a T-shirt one time and expect things to change.”

Additional episodes of gun violence soon presented the WNBA and its players with an opportunity to take their advocacy to another level. The July 2016 murders of Alton Sterling in Baton Rouge and Philando Castile in Minneapolis were then the latest infuriating examples of the all-too-familiar American tragedy: deadly police violence against black people.

However, as Lindsay Gibbs recalled in a recent edition of her Power Plays newsletter, the league was resistant to use their platform to raise awareness. Gibbs recounts:

[P]layers reached out to the league to ask for a WNBA-wide initiative addressing police brutality and racism, but the WNBA pointed to a corporatized, weak statement it made in conjunction with the NBA, and thought its job was done. When WNBA players on individual teams took it upon themselves to make their own #BlackLivesMatter t-shirts to wear before games, or to turn their black warm-up shirts inside out in protest, the WNBA proceeded to fine them.

The league, in short, chose not to affirmatively answer Stewart’s question.

Although the WNBA’s readiness to rally behind the victims of the mass shooting at Pulse was a positive indicator of how quickly the league had become comfortable supporting LGBTQ+ matters, their lack of response — and then punitive response — to players’ desire to take a stand against police violence against black lives suggested the need for additional evolution.

The league’s less-than-satisfying response to the murder of George Floyd and the revitalization of #BlackLivesMatter movement did not — at least not initially — inspire confidence, as Gibbs also discusses. WNBA Commissioner Cathy Engelbert subsequently issued a stronger statement opposing racial injustice, while also materializing the league’s commitment to real change by announcing that proceeds from its “Bigger than Ball” shirts will be donated to the Equal Justice Initiative.

To further be “Bigger than Ball,” Engelbert and the league need only to look at and listen to their players, who are combining the fights for LGBTQ+ equality and racial equality through the issue of gun violence.

On June 5, National Gun Violence Awareness Day, the WNBPA and its members partnered with Wear Orange and Everytown to raise awareness for how gun violence disproportionately impacts communities of color.

#Repost @cdupree4 ・・・ Today, I will #WearOrange to raise awareness of the dangerous intersection of gun violence and racism in America–the number of black Americans who are shot and injured in gun assaults is 15 times higher than for white Americans. I support the objectives of both gun violence prevention and racial justice organizations to end the violence that disproportionately impacts communities of color. Thank you @EVERYTOWN for teaming up with the @WNBPA as well as it’s players! #wearorange #thewwearsorange

A diversity of WNBA players — many of them queer, many of them gender non-conforming, many of them of color — posted photos and messages, communicate that the issue of gun violence, like all issues of justice, must be understood and addressed intersectionally.

And as Nneka Ogwumike made clear to the WNBA in the comments of their Instagram repost of Tierra Ruffin-Pratt, it is the players that are pushing the WNBA’s progressiveness. In the mass protest movement sparked by the murders of Floyd, Breonna Taylor and Ahmaud Arbery, WNBA players such as Ruffin-Pratt, Natasha Cloud and Jewell Loyd, among others, have exemplified this leadership.

For progress to be made permanent — or at least be less precarious — Pride must go beyond rainbow-hued promotions. Likewise, support for black lives requires more than raising a fist.

Fortunately for us, the players of today’s WNBA realize that basketball is more than just basketball. They appreciate how their very beings challenge conventional categories. They understand how, in the words of WNBPA Vice President Chiney Ogwumike, they are “playing for all those women who don’t get to be seen.”

We look forward to continuing to follow WNBA players (even to a basketball bubble in Bradenton, FL) as they marshal their Pride, power and purpose to make real “the kind of world we want to live in.”