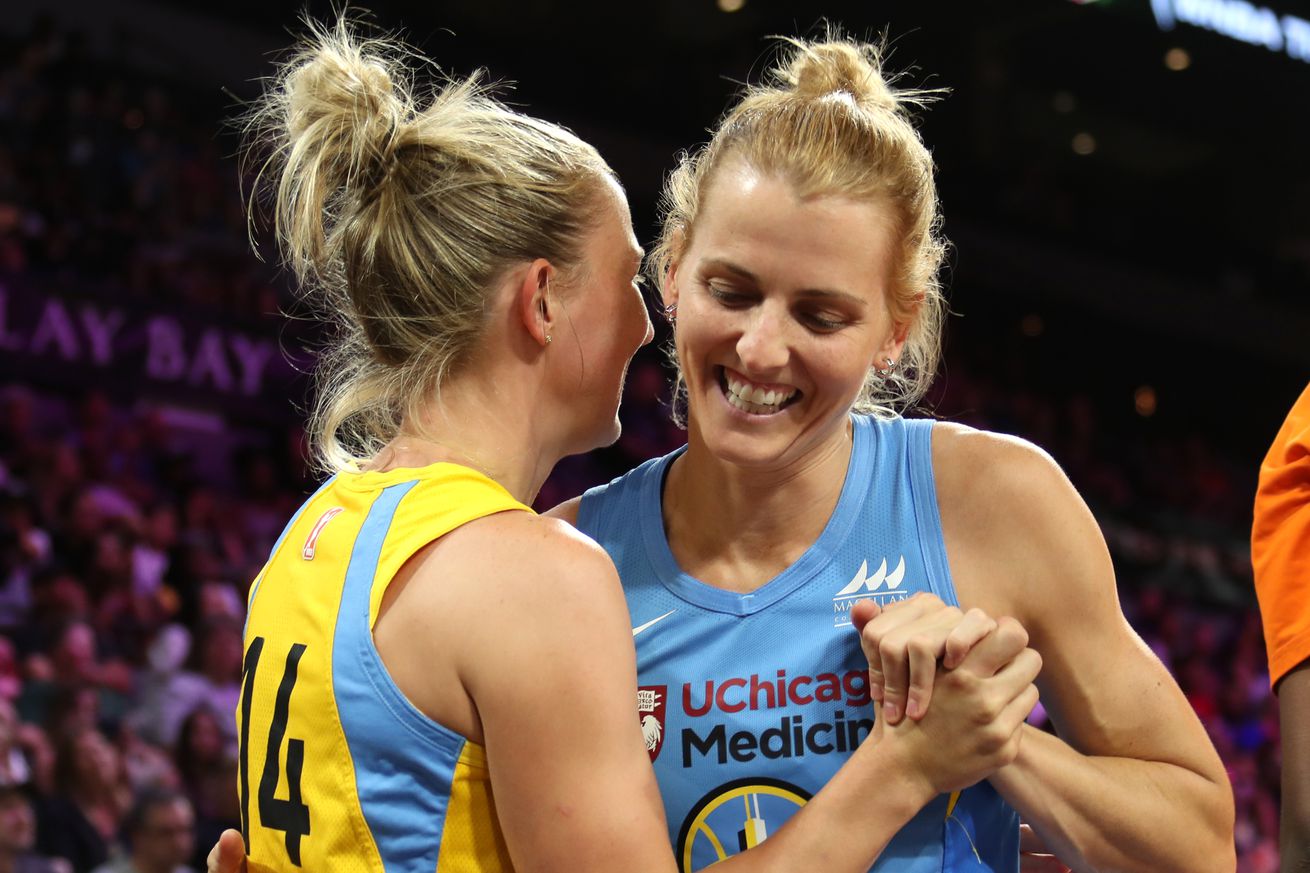 VanderQuigs stays with the Sky. Courtney Vandersloot and Allie Quigley have re-signed with Chicago, ensuring the team’s offensive might. | Photo by Melissa Majchrzak/NBAE via Getty Images

The Chicago Sky’s free agency period has been rather quiet compared to other teams. But the re-signings of Allie Quigley, Courtney Vandersloot, Stefanie Dolson and Kahleah Cooper were not insignificant. These returns, plus the signing of Sydney Colson and trade for Azurá Stevens, position Chicago to be a championship-contending team.

The Chicago Sky are proclaiming they have #NoCeiling in 2020.

While ambitious, this mantra is not totally misguided.

Decisions during the 2020 WNBA free agency signing period certainly have raised the Sky’s ceiling. Backcourt power duo Courtney Vandersloot and Allie Quigley are returning, along with Stefanie Dolson and Kahleah Copper. Azurá Stevens was added via trade from the Dallas Wings and Sydney Colson signed during free agency. The core pieces, in combination with the new faces, make a 2020 championship chase not impossible.

The Sky power couple is staying in Chicago

“We are thrilled to finish our free agency signings on a big note,” said Sky general manager and head coach James Wade of Vandersloot’s return. “To have the All-WNBA First Team point guard and MVP candidate coming back to lead our ball club is huge for us. Last season was an incredible season for her and the Sky, so we’re looking forward to Sloot leading us to achieve our goals this season.”

Stefanie Dolson not only survived the Sky’s prior doldrums — arriving in Chicago as part of the Elena Delle Donne trade, when Delle Donne, like Sylvia Fowles before her, forced exits from the seemingly floundering franchise — she has thrived.

Over the past three season, she has been integral to the Sky’s elevation, establishing it as an exciting, ascendant organization. The Sky rightfully have retained and rewarded Dolson by re-signing her to a multi-year deal.

Stefanie is a big part of our identity on both ends of the floor, and off the floor as well. She has proven to be a crucial piece in our turnaround, and I couldn’t imagine going into 2020 without her.

In 2019, Dolson furthered her evolution into an analytically-efficient stretch big. Even though she made fewer than one 3-pointer per game last season, a career-high 28.5 percent of her points came from threes. In contrast, only 16.5 percent of her points came from the midrange, a career-low. Her raw scoring numbers decreased in 2019 but her willingness to embrace this stretch role helped the Chicago offense hum by opening the space needed to make Diamond DeShield’s drives more undeniable and Vandersloot’s orchestration more effective.

The Sky acquired Stevens from the Dallas Wings, sending Katie Lou Samuelson and a 2021 first-round pick to the Wings.

Last year, Astou Ndour (who, coincidentally, is heading to Dallas in another deal between the Sky and Wings) became increasingly important to the Sky’s success. A spirited defender, Ndour flashed an expanding offensive game. Stevens can develop into a supercharged version of Ndour and offer an even more imposing defensive presence and a more dynamic offensive repertoire.

The Sky also should be applauded for their willingness to sell on Katie Lou Samuelson. Oftentimes, an organization is overly beholden to a high draft pick, unwilling to admit that they made a mistake. Rather than stubbornly cling to Samuelson (the No. 4 pick in the 2019 WNBA Draft) to prove they were right to pass on Arike Ogunbowale (No. 5) and Naphessa Collier (No. 6), the Sky took advantage of Samuelson’s appeal and used her to add Stevens — the No. 6 pick from the 2018 WNBA Draft.

Like Dolson, Kahleah Copper came to Chicago as part of the Delle Donne trade. And, like Dolson, she has become key to the Sky’s rise. The Sky thus kept Copper in Chicago as well.

Copper should enter the 2020 season as a strong candidate for Sixth Woman of the Year. While she rarely turns in spectacular scoring numbers, she is a steady, consistent contributor who uses her athleticism to do a Diamond DeShields imitation for the second unit.

The bench unit also will receive a boost from the effervescent Sydney Colson, who signed with Chicago after spending the 2019 WNBA season with the Las Vegas Aces. As head coach Wade noted of Colson:

Sydney has been a winner on every team she has been on. We are looking forward to having another dynamic, change-of-pace point guard. Even more so, we’re confident she will be a great addition to our locker room.

These returnees and newbies will be supplemented by a strong cohort of already signed players in DeShields, Jantel Lavender, Gabby Williams and Cheyenne Parker. Guided by 2019 WNBA Coach of the Year James Wade, the “Sky” just might be the limit in the Windy City.