Three Up, Three Down: Bonner shoulders heavy burden for the Sun 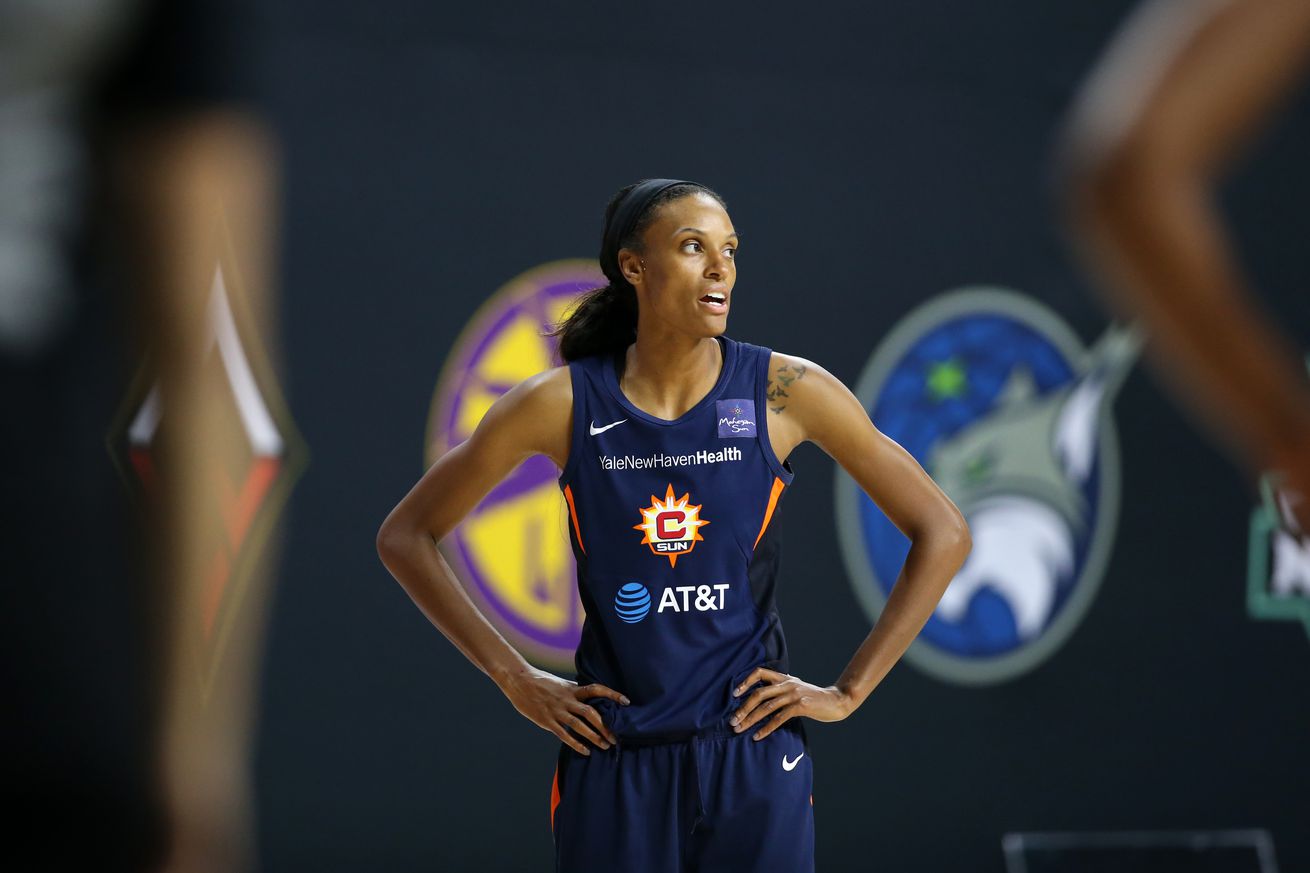 DeWanna Bonner has been putting up big numbers in her first season with the Sun. | Photo by Stephen Gosling/NBAE via Getty Images

The Connecticut Sun are off to a poor start, but it isn’t any fault of DeWanna Bonner. She’s been one of the best players in the WNBA — and in WNBA fantasy basketball — during 2020’s initial handful of games.

As volatile as the conditions of the 2020 WNBA season are, there are, just like in any other season, trends beginning to emerge.

One such trend — probably not an unpredictable one — is DeWanna Bonner quickly emerging as the Connecticut Sun’s top offensive player. She’s been a box-score beast and has those who drafted her in Sports.WS fantasy basketball grinning ear to ear.

Of course, just because something is trending doesn’t mean it’s going to stay that way. So which WNBA fantasy ups and downs are for real and which are mirages? We’ll go over key players for the Atlanta Dream, Chicago Sky and New York Liberty, among others, and analyze their prospects for long-term fantasy basketball value.

The Sun gave up quite a bit for DeWanna Bonner this past offseason and she’s been every bit of the player they invested so heavily in. Through the first four games of 2020, Bonner is averaging 27.5 points (first in the WNBA) and 8.8 rebounds per game, with 3.8 assists and 2.0 steals for good measure.

That’s an insane stat line, and Bonner’s fantasy owners have to be elated by her play. Bonner’s individual numbers, however, haven’t translated to team success — the Sun currently sit at 0-4. But, given Connecticut’s lack of depth and playmaking, the team doesn’t have much of a choice but to continue to lean on her.

Outlook: Bonner has been terrific, but the Sun might be playing with fire here. She’s currently playing 37 minutes per game and posting a 27.8 percent usage rate. Can she maintain that over the course of a condensed 22-game season? Granted, Bonner hasn’t missed a game since the 2017 season and was very durable prior to then as well. So, as long as she’s healthy, her fantasy owners will continue to enjoy her all-around production.

The Dream made plenty of acquisitions prior to the 2020 season and, while Laney wasn’t a high-profile signing like Shekinna Stricklen or Glory Johnson, she’s been dynamite for her new team. Laney is averaging career-highs across the board: 17.5 points, 4.8 rebounds, 3.8 assists, plus a very impressive 2.5 steals per game.

This is entirely new territory for Laney, who is on her fourth WNBA team since 2016. Prior to 2020, she had been known as a defensive specialist who didn’t contribute much on the other end of the floor.

Now, however, Laney has excelled in both playmaking and play-finishing roles, all while continuing to provide her usual stellar defense. She’s shooting more — 18.7 attempts per 100 possessions — and getting to the free-throw line as well, with 22.9 percent of her points coming from the charity stripe.

Outlook: It’s the most confident and aggressive we’ve ever seen Laney on the offensive end. Dream head coach Nicki Collen clearly has given her the green light to operate as a ballhandler and not just an off-ball player, and Laney has taken advantage, particularly when using her size to bully smaller wing players. However, with Courtney Williams joining the Dream after missing the season’s start, Laney’s usage is bound to take a hit. Don’t be surprised if her offensive production dips.

Williams has been yanked around a bit in her WNBA career, going from an undersized starting power forward to a backup point guard, but that’s mainly because her coaches have seen her unique skill set and anticipated her becoming a versatile, valuable player.

It’s now year three for Williams, and she seems awfully close to putting it all together. Sky head coach James Wade has shifted Williams between that backup point guard spot and a secondary playmaker role alongside Courtney Vandersloot. Williams has responded with some huge outings. She stuffed the stat sheet against Los Angeles Sparks, recording 11 points, 5 rebounds, 5 assists and 4 steals, then did it again a few days later against the Washington Mystics with 16 points, 9 rebounds, 4 assists and 2 steals.

What’s most encouraging about Williams’ season thus far is that she’s shooting (and making) 3-pointers. Through her first two seasons, Williams shot just 14-of-67 (20.9 percent) from distance. Through four games in 2020, she’s 8-of-18 (44.4 percent) from behind the arc.

Outlook: Williams’ shooting will come back down to earth, but it’s the confidence with which Williams is playing that makes her fantasy prospects promising. With circumstances forcing Wade to play shorter rotations, there’s a greater margin of error for Williams, as well as greater opportunity for her to contribute more stacked fantasy lines.

Nurse, expected to be a rare consistent presence on an otherwise wildly inexperienced Liberty team, suffered an ankle injury on opening day and hasn’t been the same since. Her scoring efficiency has been abysmal (34.4 percent true shooting percentage), and she’s made just five shots from the field in three games.

As a fantasy player, much of Nurse’s value is tied to that scoring efficiency because she’s never been a player to put up big numbers elsewhere. For her career, Nurse has averaged just 2.4 rebounds, 1.9 assists and 0.7 steals per game. It’s very likely she is still hurting, but she needs to get it going from the field if she’s to return to fantasy relevance.

Outlook: This is a tough one. The lack of peripheral stats has always made Nurse a risky fantasy option, and with New York being far and away the worst team in the WNBA thus far, the Liberty won’t hesitate to sit her if her ankle is still an issue. Even if she does continue to play through it, there are better guard options out there.

It’s a rebuilding season for the Wings, and part of what made the team so interesting heading into 2020 was how its recent draftees would jell with 2019 Rookie of the Year runner-up Ogunbowale.

So far, the results have been mixed. The team has started 2-2, but Ogunbowale hasn’t gotten into the rhythm she was in to finish 2019. Despite having more pieces around her, Ogunbowale is actually shooting more — 32.2 attempts per 100 possessions — and her efficiency has taken a nose dive — her true shooting percentage is just 41.7 percent.

Granted, Ogunbowale is still putting up the points — her 18.5 points per game ranks sixth in the WNBA — but her assists have dropped, which is the opposite of what you’d expect playing on a roster with considerably more shooting than it had last season.

Outlook: Ogunbowale had similar struggles in her rookie season, when she didn’t score efficiently before catching fire in the season’s second half. She’s scored just 10.8 percent of her points at the free throw line — down from 23 percent in 2019 — and she’s made just 21.4 percent of her 3-pointers. Both of those numbers should improve just as they did in 2019, especially as Ogunbowale gets acquainted with her new teammates.

Last season, Bill Laimbeer used Young — 2019’s No. 1 overall draft pick — as the Aces’ starting point guard, a role that Young had not played in college but performed adequately in for Las Vegas. Her lack of aggression on offense was an issue, but she did assist on over 30 percent of her teammates’ baskets, with her height making post entry passes to A’ja Wilson and Liz Cambage an easy task.

This year, however, Laimbeer has opted to roll with Lindsay Allen as his starting point guard, and with the Aces also signing veteran Danielle Robinson in free agency, Young’s role on the 2020 team has not been clearly defined. She’s actually been playing more than she did as a rookie — 24.8 minutes per game, compared to 22.6 in 2019 — but she hasn’t been nearly as prolific as a playmaker; Young’s assist rate has plummeted to 10.6 percent in 2020.

Outlook: It’s unclear what Young’s role is on the 2020 Aces. Ideally, she would continue racking up assists in Laimbeer’s fast-paced offense, but she’s no longer in a position to do so; Allen has performed well as a starter, so it’s unlikely that Young usurps her. With Young’s own offense (6.8 points per game) still a work in progress, she’s probably not a viable fantasy option right now.