Three Up, Three Down: Fantasy implications from the WNBA’s opening weekend 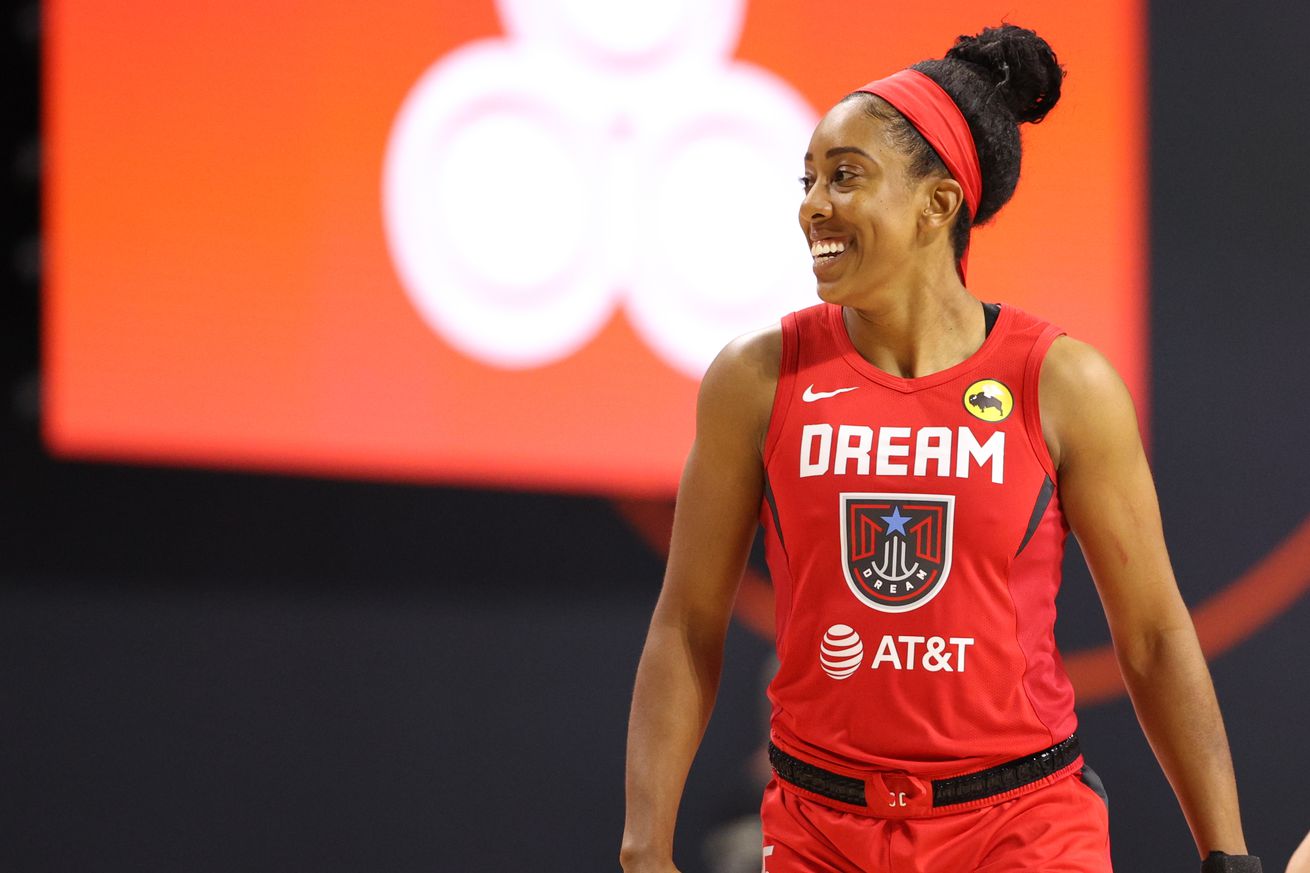 The Atlanta Dream’s Monique Billings made the most of her start on Sunday, scoring a career-high 30 points in 32 minutes of action. | Photo by Ned Dishman/NBAE via Getty Images

If you’re playing WNBA fantasy basketball during this 2020 season, changes are the recent performances of Monique Billings and Myisha Hines-Allen caught your eye.

Are you a WNBA fan? How about a fantasy basketball fan? Or maybe you’re both?

While we’re still (unfortunately) waiting for popular fantasy basketball platforms like Yahoo and ESPN to create a WNBA fantasy game, there’s still daily fantasy sports such as FanDuel and DraftKings to tide over WNBA fans, as well as the more relaxed Sports.WS fantasy website.

For those who are participating, we’re here for you! Throughout the 2020 WNBA season, we’re going to be bringing you weekly updates on who’s not and who’s not, as well as what their respective outlooks are like moving forward. Let’s get started by looking at a pair of power forwards who excelled in their new starting roles on opening weekend.

With Elena Delle Donne and LaToya Sanders — both starters during the Mystics’ 2019 championship run — sitting out the 2020 season, Washington’s returning bigs will have to step up in a big way.

Hines-Allen is off to a good start in filling that void. After playing sparingly in her first two seasons in the WNBA, the forward from Louisville broke out against an Indiana Fever team that was simply not equipped to defend her. Hines-Allen burned the Fever frontcourt to the tune of 27 points (3-of-4 from 3-point range) and 10 rebounds — all career-highs. She scored in a variety of ways, even showing an ability to handle and finish on the fast break. The only downside to Hines-Allen’s line was a lack of defensive stats, but that’s the last thing on her fantasy owners’ radars right now.

Outlook: It was an incredible performance for Hines-Allen, who saw a variety of Fever defenders and overpowered them all. She had plenty of space to operate in the Mystics’ spaced offense, and with Tianna Hawkins (two minutes) limited, she got plenty of burn even as the game got out of hand.

The Fever were clearly sluggish and a team that the energetic Hines-Allen could feast on, so don’t expect this kind of production from her on a nightly basis. With the Mystics razor-thin up front, though, Mike Thibault will continue to have little choice but to play her; depending on Hawkins’ status, minutes in the low- or mid-30s won’t be out of the question for Hines-Allen.

Similar to Hines-Allen, Billings steps into a starting role after a starting player (Glory Johnson) was announced as out. While Johnson is recovering from COVID-19 and is expected to rejoin the Dream at some point, Billings’ recent performance as the team’s starting power forward might give Nicki Collen something to think about even when Johnson returns.

Billings torched the Dallas Wings with a career-high 30 points, shooting 10-of-14 from the field and 10-of-12 from the foul line. She also grabbed 13 rebounds and blocked a pair of shots in her 32 minutes of action. Fantasy owners can’t ask for much more.

Outlook: What a game from Billings. She’s always been a productive per-minute player, but her offensive explosion showed a crucial area of growth for the third-year forward. Perhaps most encouraging of all was her heavy workload; unlike many other head coaches, Collen played a short rotation this past weekend, with backup Erica McCall playing just five minutes and rookie Brittany Brewer not playing at all. We’ll see what happens when Johnson and Kalani Brown (also recovering from COVID-19) return, but until then, Billings is set to continue putting up big numbers.

It’s going to be an interesting season for the Wings, who are clearly in rebuild mode and have several young players in need of playing time. One of those is Harris, who Dallas picked at No. 7 overall in the 2020 WNBA Draft.

Harris likely isn’t going to be a high-volume player for the Wings, and she came off the bench behind veteran Moriah Jefferson in the team’s opener. The pair did, however, evenly split the team’s minutes at point guard, with Harris both outshooting Jefferson (4-of-7 from the field vs. 2-of-7) and taking better care of the basketball (4 assists and 2 turnovers vs. 1 assist and 3 turnovers).

Outlook: It was definitely a good start to the season for the rookie, though her situation as a backup limits her fantasy potential for now. Keep an eye on Harris, though; given the amount of 3-point shooting on the Wings’ roster and their commitment to playing youngsters, she could be a productive asset sooner rather than later.

It was hard to find bright spots in the Fever’s blowout loss to the Mystics, and McCowan was arguably their biggest disappointment. It wasn’t difficult to envision a monster 2020 for the 6-foot-7 center, but McCowan got off to a rough start before the game even began, with new head coach Marianne Stanley opting to start Natalie Achonwa instead.

In her time on the court — just 14 minutes — McCowan was ineffective, missing all four of her field goal attempts and having little defensive impact against a Mystics team that spaced the floor with shooters at almost every position. She finished the day with just one point, four rebounds and zero defensive stats.

Outlook: This wasn’t a particularly good matchup for McCowan. For all her strengths as a rim protector and shot blocker, she’s highly vulnerable against bigs who can shoot from the outside such as the Mystics’ Emma Meesseman and Tianna Hawkins. Stanley said after the game that McCowan will get more minutes in the Fever’s upcoming game against the Phoenix Mercury — presumably to match up with Brittney Griner — so there’s little reason to worry at this point.

The Lynx are currently without 2019 All-Star Odyssey Sims, who recently gave birth to her first child. Brown was tabbed by Cheryl Reeve as Sims’ replacement in the starting lineup, raising hope that she would get more of an opportunity as a playmaker than she did last season (12.6 percent assist rate).

It was Brown’s backcourt partner Shenise Johnson — who had played largely off the ball during her WNBA career — who spent most of the time initiating the Lynx’ offense, however. Brown, meanwhile, struggled from the field against the lengthy and active Connecticut Sun perimeter defense, shooting 2-for-11 from the field and 0-6 on 3-pointers. She also turned the ball over three times and did not record a single assist.

Outlook: Brown should be fine for now. It’s disappointing that Reeve did not play her as the team’s lead guard, which hampers her fantasy value significantly in the assist department, but she still played 29 minutes and it’s unlikely that a shooter of her caliber remains cold from the field.

Sims is apparently shooting for a return sometime in 2020, though, and rookie point guard Crystal Dangerfield was instrumental in Minnesota’s fourth-quarter comeback. Those are two reasons for long-term concern, but we’ll see how Brown performs against softer defenses until then.

Sunday’s highly-anticipated game between the Sky and Aces delivered on the hype — for the most part. Just like last year’s incredible postseason matchup, the Sky and Aces engaged in a fast-paced slugfest that ultimately came down to the game’s final seconds.

Noticeably missing was Aces guard Kayla McBride. The 3-point attempt disparity between the two teams (27 for Chicago and 5 for Las Vegas) definitely didn’t favor McBride, who scored just two of her team’s 86 points. With A’ja Wilson and Angel McCoughtry getting to the rim at will, the Aces almost seemed to abandon McBride in their offense, benching her the entire fourth quarter in favor of Jackie Young.

Outlook: We know that the Aces aren’t going to be looking for the 3-point shot often, and this was only exacerbated by the success they were having in the post against Chicago’s frontcourt. McBride’s services as a shooter will be needed more against stronger interior defenses, and she’s played 32.3 and 29.1 minutes per game in her two seasons under Bill Laimbeer, so the 17 she played on Sunday isn’t concerning. Moreover, the Aces are routinely one of the fasted-paced teams in the league, so even if McBride isn’t their No. 1 or No. 2 option, all those extra possessions will somewhat make up for her low usage.