Three Up, Three Down: Opportunities arise in Dallas, Washington 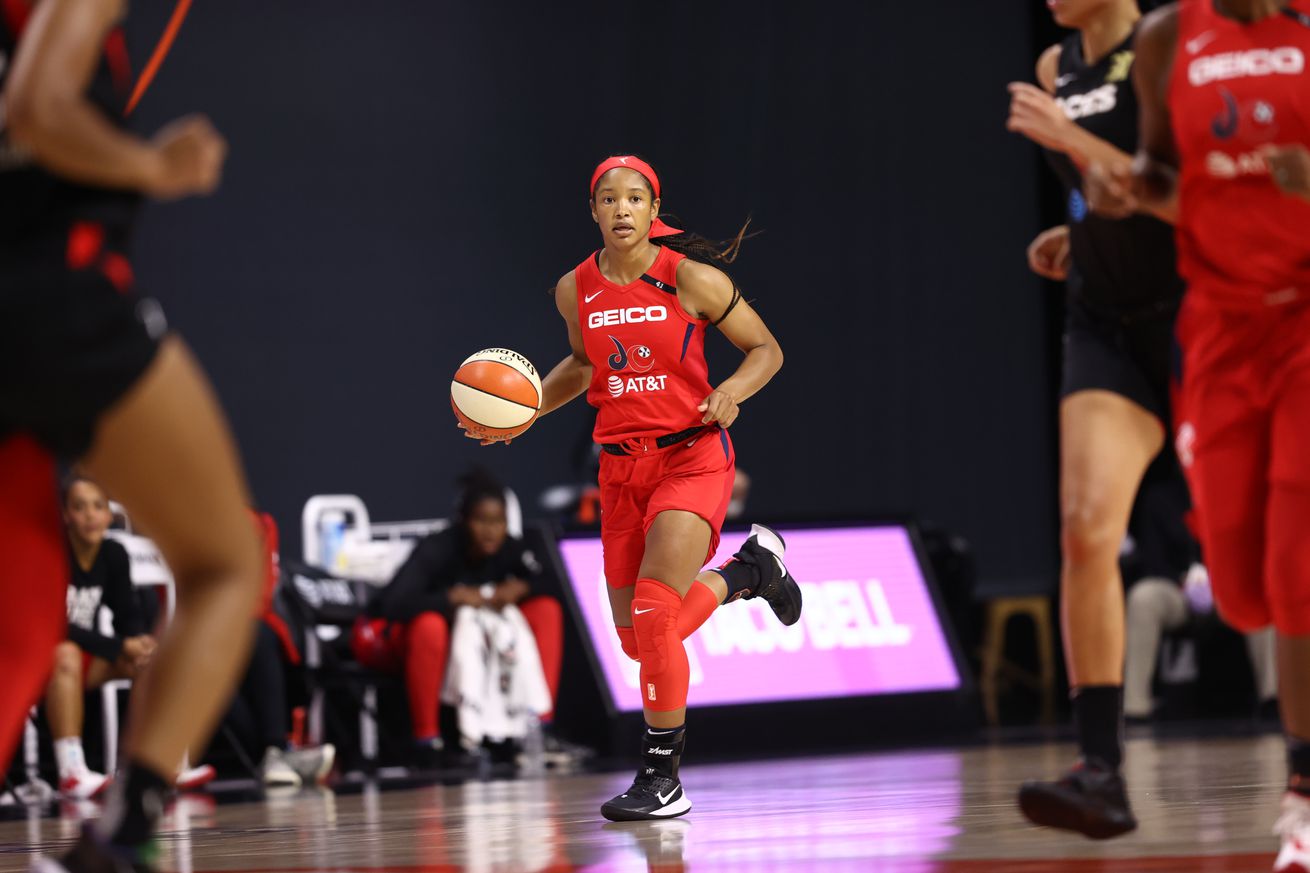 As the 2020 WNBA season passes its halfway point, injuries are beginning to take their toll. This means more playing time — and more fantasy value — for players like Marina Mabrey, Stella Johnson and Kahleah Copper.

We’re past the halfway point of the 2020 WNBA season, and while the league’s fantasy basketball studs have long since established themselves, injuries are beginning to pile up around the league.

As any fantasy player knows, injuries to high-usage players mean opportunities for others. This has been magnified in 2020’s volatile conditions. With the league’s condensed schedule taking its toll on most WNBA teams’ depth, reserve and replacement players have had to step up and do it quickly. There are plenty of examples of this; we’ll go over just a few in this week’s edition of “Three Up, Three Down.”

The Wings have been tinkering with their starting lineup ever since the season began, and it seems like they’ve finally found Arike Ogunbowale’s ideal backcourt mate. It’s her former collegiate teammate Mabrey, who has been on fire since being named a starter.

Mabrey missed the first handful of games of 2020, but it didn’t take her long to get up to speed, and inconsistent point guard performances from other Wings have paved the way for more minutes. She’s taken advantage: In her past four games (all starts), Mabrey has absolutely scorched the nets to the tune of a 65.1 percent effective field goal percentage, averaging 16.3 points in those contests.

Outlook: Mabrey’s shooting will cool off, but her overall impact suggests that she’s a good fantasy investment. During her starts, the Wings have scored 11.3 more points per 100 possessions with her on the court than with her on the bench. Dallas recently announced that Moriah Jefferson will miss the remainder of the season due to a knee injury, so Mabrey’s spot in the rotation should be locked up.

The Mystics went from early surprise to downright mess awfully quickly, and if the losses haven’t been enough, injuries continue piling up for the defending champs. Aerial Powers is officially done for the season, while Emma Meesseman has a sprained shoulder that the team is likely going to take its time with. Head coach Mike Thibault has indicated that the Mystics will be “looking at young players” in lieu of veterans, which should be music to fantasy players’ ears.

In particular, Johnson figures to benefit the most from this approach. Signed as an emergency hardship player after getting waived by Chicago, Johnson broke out with a 25-point performance against Atlanta, and has averaged 22.3 minutes per game in her last four appearances.

Granted, Johnson followed that up with a goose egg in 21 minutes against Dallas, but she’s just months removed from leading the NCAA in scoring at Rider University, so she’s a player who’s probably going to get her shots up no matter what.

Outlook: You don’t need to look much further than Thibault’s quote to see what this means. This is a lost season for Washington, and fringe players like Johnson will get plenty of freedom as they continue to battle for a more permanent spot once the Mystics return to full strength next year.

Copper has been killing it as the Sky’s starting small forward all season, but she’s been even better as of late. The athletic wing is averaging 16.2 points per game in her last five, shooting 50 percent from 3-point range on 3.2 attempts.

That efficiency has been the story of Copper’s breakout campaign. While Diamond DeShields’ nagging knee injury opened the door for Copper to play more, her usage rate of 22 percent is right in line with what it’s been during her time in Chicago. She’s just making a much higher percentage of her shots — most notably from distance, which is a shot that has been inconsistent for Copper over the years but has been a deadly weapon in 2020.

Outlook: Unfortunately for Chicago, DeShields went down with a leg injury in the Sky’s recent game against the Liberty, and though she was marked as “questionable” on the Sky’s latest injury report, the leg wrap and crutches she was seen with suggest that tag was optimistic at best. Expect Copper to continue to shine as one of Chicago’s primary offensive options, especially in transition.

Can anyone figure out what’s going on with New York? 2020 was billed as a rebuilding season, but this Liberty team full of rookies has been less “fun-bad” and more “just plain bad” — and its approach has been somewhat confusing.

At 1-12 with by far the worst net rating in the WNBA, you’d think that head coach Walt Hopkins would be finding as many minutes as possible for his six healthy rookies, but that hasn’t been the case, with veterans Layshia Clarendon, Amanda Zahui B., Kia Nurse and Kiah Stokes all still playing 25 minutes per game.

Willoughby has had an increasingly difficult time cracking Hopkins’ rotation. She hasn’t played more than 10 minutes in a game since Aug. 15, watching players like Nurse and fellow rookie Leaonna Odom getting significantly more opportunity even in blowouts, and hasn’t hit a 3-pointer since July.

Outlook: It has to be difficult to manage such a young team, but it’s bewildering how Willoughby’s minutes have dropped since the beginning of the season. She was a first-round pick in the 2020 Draft when the Liberty traded for her, so they had to have valued her highly, but something has obviously changed since then, and it’s completely tanked Willoughby’s fantasy value.

On the other end of the standings, the Sparks have had quite the successful season. They’ve won seven straight games and currently sit at 10-3, tied with the Las Vegas Aces for second place.

Not every player on the Sparks has been a major contributor to that success, however. Los Angeles has gotten its usual excellent production from Candace Parker and Nneka Ogwumike in the frontcourt, while backup center Kristine Anigwe has made strides in her second WNBA season. Head coach Derek Fisher has even opted for guard Seimone Augustus to play power forward for stretches, going with extremely small lineups to control the pace of games.

There simply hasn’t been any room in the rotation for Gray, who played sparingly at the beginning of the season but fell out of favor once Marie Gülich returned from injury. This isn’t the most surprising development, given that Gray was a last-minute signing after the opt-outs of Chiney Ogwumike and Kristi Toliver, but it’s still somewhat disappointing that one of 2019’s top offensive rebounders hasn’t factored into the Sparks’ winning equation.

Outlook: Fisher did comment earlier about using lineup data to help make his decisions, but this is probably just a case of Gray being the odd woman out. It’s hard to see the Sparks changing things up this late in the season, so she’s safe to drop.

The Sun have dug themselves out of the basement after starting the season 0-5, and improved depth is a major reason why. The return of guards Briann January and Natisha Hiedeman from COVID-19 has helped stabilize things, as has head coach Curt Miller’s increased confidence in rookie Kaila Charles.

Connecticut simply hasn’t gotten enough from Mosqueda-Lewis, however, and seems to have cost her a spot in the Sun’s rotation. Mosqueda-Lewis, who was acquired by Connecticut this past offseason, has always been more of an offensive player than a defensive one, but her offense hasn’t been there. Per Synergy Sports, she’s scored just 0.756 points per possession on jump shot attempts (30th percentile), and she’s shooting a career-worst 21.6 percent from 3-point range.

Even when her shot has been on, it’s been difficult for Mosqueda-Lewis to stay on the floor because of how much of a liability she is on defense. It’s been downright ugly this season: Mosqueda-Lewis’ net differential is -35.3, by far the worst of any Sun player. It’s not surprising that Miller has been going elsewhere lately.

Outlook: There’s not much to see here. As a fantasy asset, Mosqueda-Lewis was always going to be a 3-point-or-bust investment, and her value there has been virtually nil. There’s little reason to play her right now.