Three Up, Three Down: Sabally finds her footing 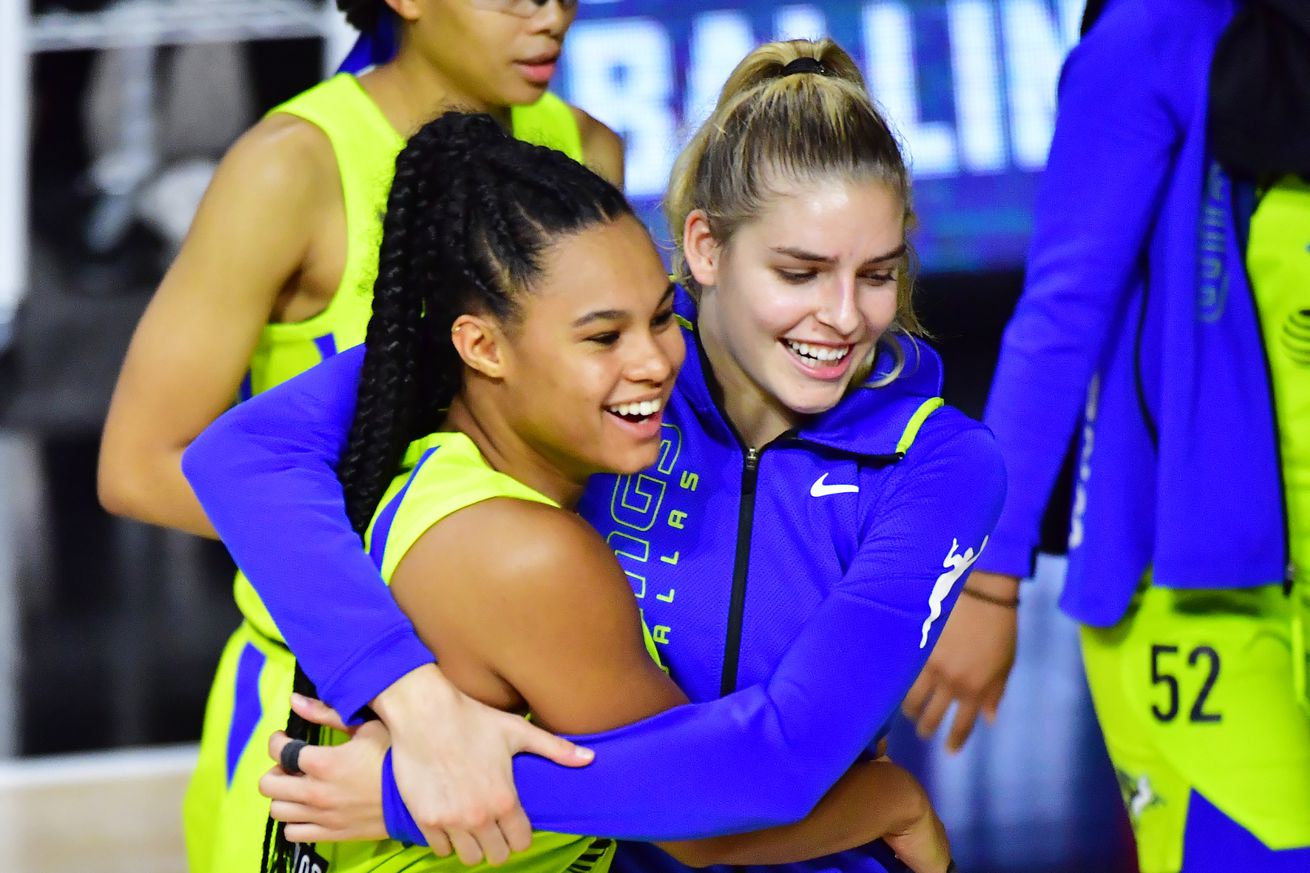 Rookies Sabally (left) and Bella Alarie are both crucial pieces for the rebuilding Wings, but they’ve been competing against each other for fantasy basketball value. | Photo by Julio Aguilar/Getty Images

Though still trying to establish an identity, the Dallas Wings are on the cusp of a playoff spot. Satou Sabally is starting to put it all together, which has left her fantasy owners grinning from ear to ear.

Injuries and absences continue to accumulate across the WNBA, leaving many teams shorthanded. In some cases, replacement players are being signed, but for the most part, lower-usage players have been tasked with stepping into larger roles.

Just as we discussed last week, the league’s precarious injury situation has left the door open for players who may not yet be household names to leave their mark. Not every team has taken the same approach to dealing with the 2020 season’s condensed schedule, however, and figuring out what each head coach’s plan is has been a bit of a challenge. Let’s go over who’s hot and who’s not in “Three Up, Three Down.”

With the recent news of Bria Hartley’s ACL tear, the Mercury are now astoundingly thin. Phoenix was already without Brittney Griner, who has left the bubble, so you can bet that its backcourt of Diana Taurasi and Skylar Diggins-Smith will be getting the lion’s share of the team’s offensive usage.

Don’t let that overshadow what Brianna Turner has been doing. While the paint-bound forward was never a great fit next to Griner, she has been terrific since the Mercury star left the team, averaging 12 rebounds, 3.8 blocks and 1.5 steals in 33.5 minutes of play. She also has cashed in on the few shot opportunities she’s gotten, scoring 7.3 points on an incredibly efficient 81.3 percent shooting.

Outlook: The defensive stats are what you’re seeking from Turner (anything she gives you on offense is just icing on the cake), and she’s providing them in spades as the Mercury’s primary center. Pretty much everything is encouraging here, especially the minutes. And now that she has been unleashed in the mobile and energetic help-defender role she excelled at during her days at Notre Dame, Turner is in a great position to continue putting up those kinds of numbers.

Sabally missed a few games in mid-August due to back problems. While her first game back was a dud, she has since stuffed the box score. Sabally posted back-to-back double-doubles of at least 18 points and 11 rebounds, and she went to the free-throw line at least 10 times in both efforts.

Sabally’s versatility has really come in handy for the Wings, who now are without Isabelle Harrison (ankle) at center. Head coach Brian Agler has elected to start Sabally in a small-ball lineup, which has put the talented rookie in a position to out-maneuver bigger, slower players off the dribble and on the glass. Dallas is currently fighting for a playoff spot, and while the team hasn’t exactly been hot, Agler seems to have found something to build on with Sabally at center, so we’ll see if he keeps rolling with it.

Outlook: The fun part about owning Sabally in fantasy is she can contribute almost anywhere. She’s had an up-and-down rookie campaign thus far, but her starting spot is solidified, and the threat of her double-doubling with a few assists sprinkled in on any given night is enticing.

The Sky have gone from a relatively deep team to a thin one in short order, with both Azurá Stevens (knee) and Diamond DeShields (personal) leaving the bubble in recent days. Chicago traded for forward Stephanie Mavunga to shore things up, but Mavunga has been recovering from an injury of her own (nose). Head coach James Wade suggested Mavunga’s health will be imperative to the team moving forward but she has yet to join the Sky and remains in medical protocol.

This means that, for the time being, Wade will depend heavily on Hebard. The rookie had the luxury of getting her feet wet behind Stevens and Cheyenne Parker for the season’s first month or so, but Chicago is low on healthy bodies at the moment, so it’s now Hebard’s time to shine. Until Mavunga is ready to play, the Sky don’t have much of a choice.

Outlook: Hebard has been trending up in recent games, so it’s not a surprise that Wade started her on Monday against Indiana. She rewarded his faith with the best game of her young career, earning her first double-double while shooting 6-of-8 from the field. Hebard isn’t going to give fantasy players many defensive stats, but with so much of Chicago’s shot creation now on the shelf, the team might need to opt for a more pick-and-roll heavy offense, which is Hebard’s bread and butter. Fantasy owners need the Sky to play her alongside Courtney Vandersloot as much as possible to maximize her value.

It’s probably a tad unfair to keep grinding our gears over the Liberty’s inconsistencies — last week it was Jocelyn Willoughby whose minutes were in question — but when a team invests so heavily in rookies but doesn’t give them regular playing time, it’s a bit odd.

Walker, who the Liberty drafted at No. 9 overall, is New York’s latest youngster to have her minutes cut. She went from 13 minutes on Aug. 23 to just three a couple days later, and was a DNP (rest) in the Liberty’s last game. She hasn’t been very productive in her time on the court, either, averaging just 3.7 points per game and providing few peripheral statistics.

Walker reported late to the Liberty after testing positive for COVID-19 in July, so it’s completely understandable if she hasn’t played her way into basketball shape yet or if head coach Walt Hopkins is being abundantly cautious.

Outlook: This team is a mess. It would be nice if Hopkins let the kids play, but if Walker is still recovering from COVID-19 or needs extra rest during the season’s condensed schedule, we can’t question that. Also, Walker has been ruled out for the Liberty’s game on Tuesday, Sept. 1, due to a hip injury, so it’s probably best to punt on her and wait until 2021 to see what she can do.

Gülich is a player who the Sparks were excited to acquire in the offseason and, while she got off to a strong start in August, her playing time has fallen off a cliff recently. Before the Sparks’ blowout loss to Minnesota on Aug. 31, Gülich hadn’t played at all in ten days. Before that, she hadn’t played double-digit minutes since Aug. 11.

The interesting thing here is that Gülich’s decrease in minutes hasn’t really correlated with an increase for any of the Sparks’ other post players. Head coach Derek Fisher has not been shy about playing small with Seimone Augustus, Brittney Sykes and Tierra Ruffin-Pratt taking turns at the power forward position, and when someone like Gülich or Kristine Anigwe comes off the bench, it hasn’t been for long stretches.

Outlook: The Sparks want to get out and run, and smaller lineups help fulfill that vision. It’s not much of a surprise to see Fisher eschew traditional post player minutes. We’ll see what happens here as the season winds down. The Sparks are fighting for a top-2 playoff seed. When they get locked in, Gülich may get more of an opportunity if Fisher decides to rest his heavy hitters.

One would think that Isabelle Harrison’s injury would mean more playing time for Bella Alarie, but that hasn’t been the case. In fact, in the Wings’ first game without their starting center, Alarie played just four minutes, and it hasn’t gotten much better from there.

Alarie got some early-season hype because of her defensive playmaking, recording multiple steals in three games and four blocked shots in another. She’s failed to record a defensive stat since Aug. 21, however, and the inconsistent playing time surely has something to do with it. Sabally’s emergence as the Wings’ de facto center has been a real bummer for Alarie’s fantasy value, too. It would be fun to see the pair on the court more often, but in the three games since Sabally has returned, such lineups have been ineffective.

Outlook: It’s been a strange rookie season for Alarie, who was billed as a highly-skilled forward but has been used as more of a low-post center. The defensive stats were keeping her fantasy value afloat early, but those have since dried up, and it’s hard to trust the Wings will play her enough to get her back on track.