Three Up, Three Down: Scoring guards igniting around WNBA 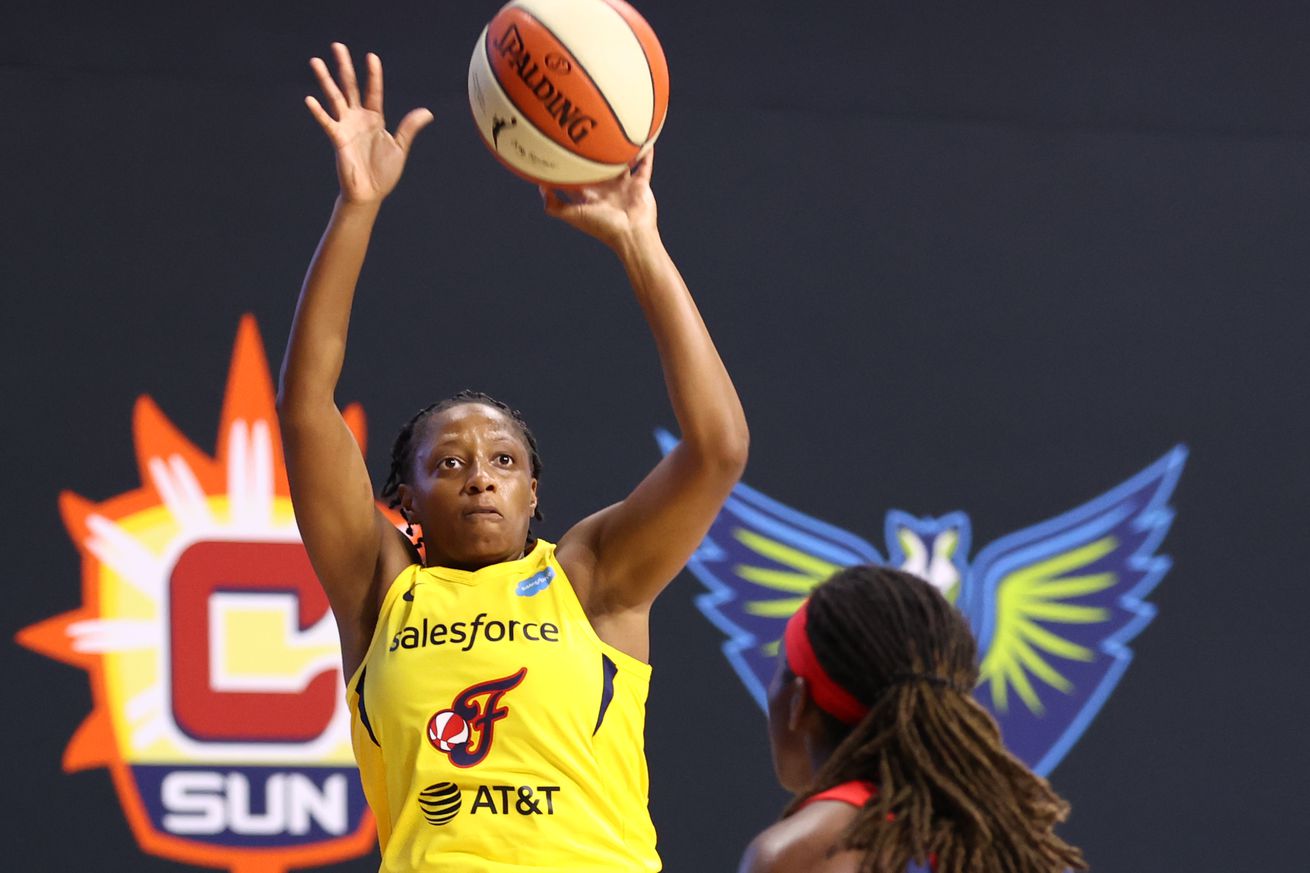 Kelsey Mitchell continues to let it fly for the Indiana Fever, but her scoring has improved elsewhere, too. | Photo by Ned Dishman/NBAE via Getty Images

A handful of the WNBA’s top scoring guards are off to a good start in 2020. Ahead of the pack is the Indiana Fever’s Kelsey Mitchell, whose increased scoring efficiency is raising her fantasy value.

One thing that’s always fun to watch for as each WNBA season rolls around is a potential breakout season from your favorite player.

It’s especially fun for fantasy basketball players, who try to get every edge they can before the season begins. Which players are primed for career years? Which ones are going to benefit from larger roles?

So far, Kelsey Mitchell and Lexie Brown have been two of those players. While neither have been the most consistent fantasy asset, both Mitchell and Brown have caught our eye as improved players at the guard position, and both have benefited fantasy owners significantly more than they would have in the past.

Is 2020 the breakout season we’ve been expecting from Mitchell?

We’re seven games in and it’s looking good so far. Mitchell is playing huge minutes (34.3 per game), which is largely a function of Erica Wheeler remaining in quarantine, but her scoring efficiency has taken a huge leap. Mitchell is currently scoring the ball on a 63.5 percent true shooting percentage, which ranks seventh among WNBA guards, and has made a league-leading 21 3-pointers.

Bombing away from outside is nothing new for Mitchell, though. What’s even more encouraging has been her scoring from inside the arc; Mitchell’s 2-point field goal percentage has jumped from 39.8 percent last season to 51.9 percent this season. The game is beginning to slow down for the talented guard, and it’s been evident in her play.

Outlook: Unfortunately, Mitchell is still far from a finished product, posting a career-low 15.7 percent assist rate and recording just one steal in those seven games. Her value as a fantasy player, then, continues to be tied directly to her scoring numbers, so while it’s great to see her shot selection and finishing improving, her lack of peripheral statistics still makes her somewhat of a risky pick.

Brown got off to a slow start as the Lynx’ starting shooting guard, shooting poorly in the team’s opener before suffering a concussion and missing several games thereafter.

She’s been excellent since returning to the lineup, however. While her outside shot has been somewhat inconsistent — Brown scored 26 points on 9-of-14 from the field against Indiana before scoring just 7 on 2-of-8 shooting against the Sparks — she’s recorded 19 assists in her past three games, which is a great sign that she’s becoming more confident in her playmaking ability. Even more important for her fantasy status, Brown has racked up 14 steals in that same period; depending on the scoring format of your fantasy league, such defensive prowess can win matchups single-handedly.

Outlook: Odyssey Sims will be returning soon, but it might take her a while to get back into game shape, and even when she’s at 100 percent it would be surprising to see Brown get moved to the bench. With Shenise Johnson (hamstring) still on the shelf, Brown will continue to get her fair share of opportunities as one of Minnesota’s lead guards.

How does 35 points against the league’s top defense — in your sixth professional game, no less — sound?

Carter put the WNBA on notice when she shredded the Seattle Storm on 11-of-17 shooting (10-of-10 from the free throw line), throwing in 7 assists for good measure, and it’s just the beginning for this uber-talented rookie.

With Renee Montgomery and Tiffany Hayes opting out of the 2020 season and Courtney Williams a late arrival, the Dream have more or less been Carter’s show. She’s delivered on the hype: Through her first eight games, Carter was leading the Dream in both scoring (19.4 points) and distributing (4.3 assists) while sporting a massive 30.9 percent usage rate.

Even with Williams now back in the fold, Carter has remained a ball-dominant player, and for good reason: She’s already among the WNBA’s best at getting past her defender and getting shots at the rim for herself or for others. She’s also the only such player Atlanta has, so you can bet the Dream will keep turning to their rookie in big moments heading forward.

Outlook: Carter left Monday’s game against Connecticut early with an ankle injury and did not return. That’s the only reason to worry about Atlanta’s prized rookie; the Dream have already given Carter the keys to the car and given how much she adds to their offense, they can ill-afford to sit her for long stretches. Expect many more big performances from Carter as the season rolls on.

The Mystics took many by surprise when they started the season 3-0, but they’ve fallen back down to Earth recently, as has their third-year wing Atkins.

From the outside, Atkins’ numbers still look good. She’s scoring a career-high 14.6 points per game on a 65.5 true shooting percentage, and she remains a steady hand with the basketball despite the Mystics lacking the firepower they trotted out in 2019.

Atkins has had a rough go of it lately, however, failing to score in double figures in each of her past three games and shooting 9-for-28 (32.1 percent) from the field. She’s gotten up just eight 3-pointers in that span after attempting 6.5 of them per game in her previous four games. Her line in the Mystics’ recent loss to Las Vegas was particularly disappointing: 9 points, 1 rebound and 2 assists in 30 minutes of play.

Outlook: Given the Mystics’ reliance on the 3-point shot, they’ll likely be a high-variance team in 2020, and the same goes for Atkins. She’s not going to create many shots for herself, and her 3-point shooting (52.9 percent on the season) is bound to regress sooner or later. Washington doesn’t have much depth, though, so Atkins’ current workload of around 28 minutes per game should stay consistent, and she’s a good bet to provide a steal or two in each game she plays.

DeShields seemed primed for a breakout season in 2020, but knee inflammation has hampered her since the Sky’s opening game, and her production has taken a massive hit.

In 19 minutes per game — down from 30.2 in 2019 — DeShields is averaging career-lows in points (7.9), rebounds (2.0) and assists (2.1) per game, while her turnover rate has skyrocketed. It’s just been bad news across the board; while DeShields has still been able to get a good chunk of easy baskets in transition (28.6 percent of her scoring opportunities have come there, per Synergy Sports), her trademark athleticism hasn’t been there for consistent stretches.

Outlook: It’s not fun to see such a dynamic player so clearly limited, and with Kahleah Copper playing the best basketball of her career as a starter, it’s hard to predict when DeShields will pick it up. If her knee is still bothering her (which we haven’t heard much about), it wouldn’t be surprising to see her sit out a game or two, especially given the abundance of caution WNBA coaches have shown during this season’s strenuous schedule.

What happened to Natasha Howard?

The reigning Defensive Player of the Year has been nearly invisible relative to the success she’s enjoyed in previous seasons. After averaging 18.1 points per game in 2019, she’s barely looking to shoot at all, and her 40.9 true shooting percentage is a career-low.

Worse still, the defensive stats that once made Howard a fantasy beast have been noticeably absent. She averaged a combined 3.9 steals and blocks per game in 2019; that has taken a nosedive to just 1.7 this year.

Of course, this drop in per-game stats is explained by the simple fact that Howard isn’t playing. Her 17.8 minutes per game are by far the fewest she’s played since arriving in Seattle, and it’s obviously impossible for a player to produce if she isn’t on the floor.

Outlook: It’s hard to figure out exactly what’s going on here. It’s not because Breanna Stewart is back; Howard was still a very effective per-minute player when the pair last played together in 2018. She’s too talented to remain such a non-factor, so this could be a buy-low opportunity, but Seattle has plenty of frontcourt depth, so signs could be difficult to look for.