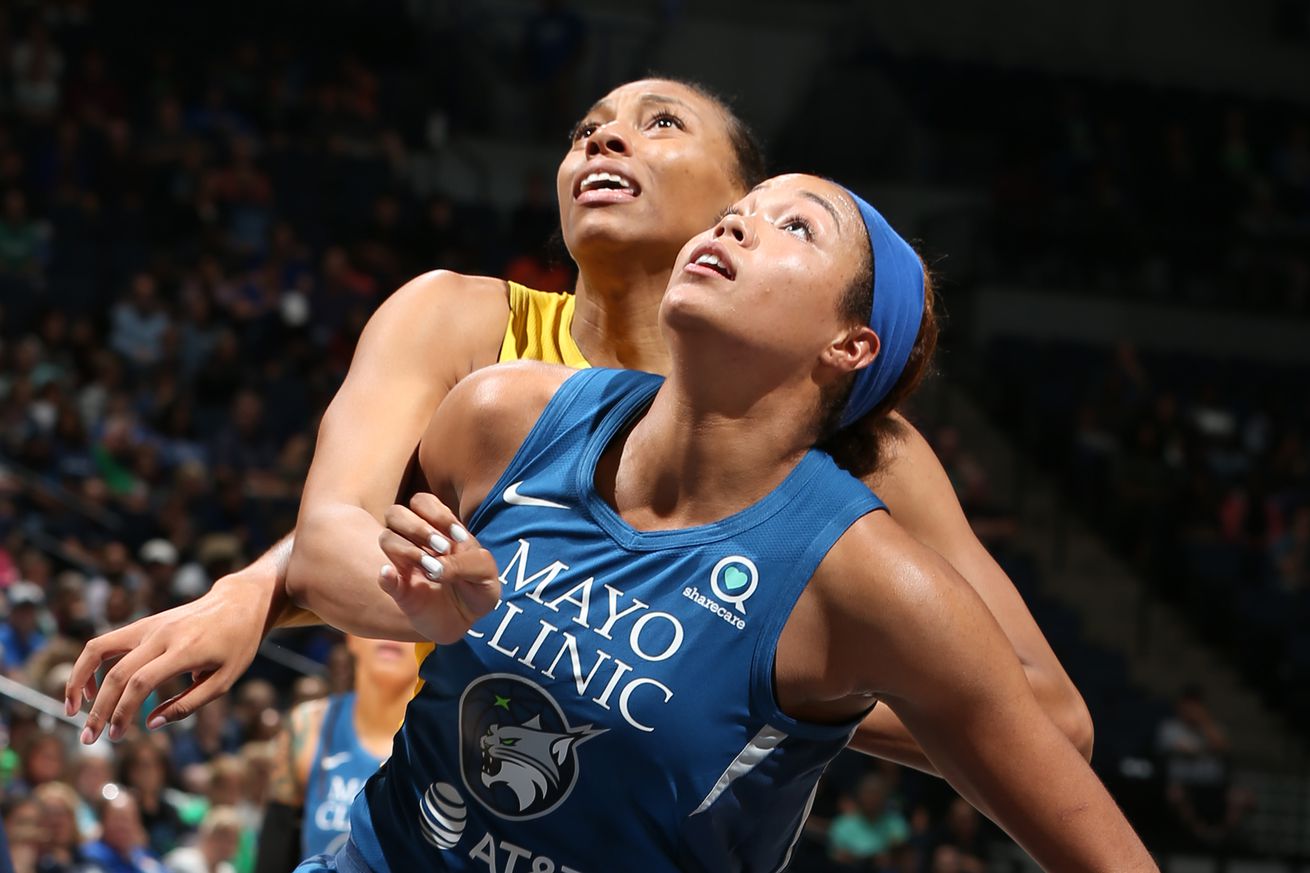 Will Napheesa Collier (in blue) be the best sophomore this season after winning Rookie of the Year in 2019? | Photo by David Sherman/NBAE via Getty Images

2019 Rookie of the Year Napheesa Collier and Arike Ogunbowale, who led all rookies in scoring last year, are poised to help lead the Minnesota Lynx and Dallas Wings, respectively. But they aren’t the only second-year players who could do big things in 2020.

The 2020 WNBA Draft was highlighted by the No. 1 overall selection of a transcendent college player in Sabrina Ionescu. While the 2019 draft lacked that type of player, Napheesa Collier and Arike Ogunbowale are already stars after their rookie season — and don’t forget about a pair of dominant bigs, No. 1 overall pick Jackie Young and a few other players that could surprise us.

Unfortunately, 2019’s No. 2 overall pick, Asia Durr, tested positive for the coronavirus in June and will not be playing this season. But there is still a lot of talent from that class to keep an eye on.

The reigning Rookie of the Year was the lone first-year player to make the 2019 All-Star Game. Her sophomore campaign should be even more fun to watch. She has already been named a captain for the Lynx and will try to complement 2017 MVP Sylvia Fowles in the post, while also playing on the perimeter at the three position. Collier had the following to say in a recent Zoom call about being named captain:

I felt really honored when I was approached to be a captain, especially in my second year. I take it very seriously. I want to be for someone what Syl and the other captains were to me last year. Someone they can look to and talk to. … I definitely want to be that person for anyone on the team. My leadership style is usually more lead by example but the past couple of years, especially in college, I had to step into that more vocal role. So it’s something that I have been trying to grow at and trying to get better at and it’s something that I will try to bring to the team now.

Ogunbowale was third in the WNBA in scoring last year and received 14 votes to Collier’s 29 for Rookie of the Year. This year she is expected to make her first All-Star appearance and pour in the points once again. She is the best player on a Dallas team that features a lot of youth — nobody over the age of 27.

Ogunbowale was dominant on offense and a clutch player during her time with the Notre Dame Fighting Irish, which featured a national championship, so she knows how to win and she knows how to lead. Expect her leadership role with the Wings to increase as she tries to improve as a distributor as well. There are three other second-year players on Dallas’ roster, including prolific college scorer Megan Gustafson, and three rookies, including versatile offensive threat Satou Sabally and stretch four Bella Alarie. Look for Ogunbowale to help these other young players score and improve.

McCowan was a dominant, 20-20 capable force in college at Mississippi State and is one of the tallest players in the WNBA at 6-foot-7. She had a solid rookie year and now has a chance to be the best player on the Fever. If she’s not, she’ll certainly be close to it. Look for the chemistry between her, Candice Dupree, Kelsey Mitchell, Natalie Achonwa and Erica Wheeler to improve this season.

It was a little surprising to see Young go ahead of Ogunbowale (No. 5 pick) and McCowan (No. 3 pick) in the 2019 draft, and both of those players turned in great rookie seasons. Young was still a solid contributor in Vegas, though, and her lower numbers reflect the amount of talent the Aces had. Expect the Notre Dame product to have a chip on her shoulder as she enters her second season. She will need to play a bigger role for the Aces because fellow guard and No. 1 overall pick Kelsey Plum is out for the season with an Achilles injury.

Brown is the same height as McCowan and is a better all-around scorer with somewhat of a mid-range game. She may not be as good of a rebounder as McCowan, but could be mentioned in the same breath as her if she improves in 2020. Considering her talent and height, Brown was a steal for the Los Angeles Sparks at No. 7 overall in the 2019 draft and now she hopes to be a key member of the Dream’s rotation.

Turner may have the most room to grow out of all the players on this list. She stepped up and impressed a lot of people with the potential she displayed as a rookie. She is tall (6’3”) and fast and could become one of the top power forwards in the league by the time she reaches her prime.

Hiedeman was a dominant college player while playing for the Marquette Golden Eagles in the Big East. She was the 18th pick in the 2019 draft, yet outperformed quite a few players taken above her.

If you followed Big East basketball in 2018-19, you may not have been surprised. Hiedeman is a physical, tough guard with an array of scoring talents and has been able to transfer that talent well enough to have been granted a second WNBA season. Now we’ll see if she can make a bigger impact on the Sun in her second year.

The Sparks chose Anigwe to play in the post for them over high-ceiling 2020 draftee Beatrice Mompremier, who they cut. Anigwe didn’t do much for the Connecticut Sun and Dallas Wings last year, but put up some of the best numbers in the country in college while playing in a very competitive Pac-12 conference. She certainly has the skills to be a good WNBA player.

Gustafson was drafted later than what you’d expect for someone with her list of college accolades. Many questioned the 2019 National Player of the Year’s ability to translate her game to the pros. After signing with Dallas (the team that drafted her) early in the season, she didn’t contribute very much last year. However, she is definitely a sophomore that many people will want to watch to see if she can live up to her college resume.

Mabrey entered the WNBA with a Notre Dame draft class that included Ogunbowale, Young, Turner and Jessica Shepard, the last of whom played well in 2019 before getting injured. With the other three being on this list, it is possible for Mabrey to be part of a special group of Notre Dame alums. She made 21 threes as a rookie with the Sparks and has the potential to become a dangerous weapon from the perimeter.