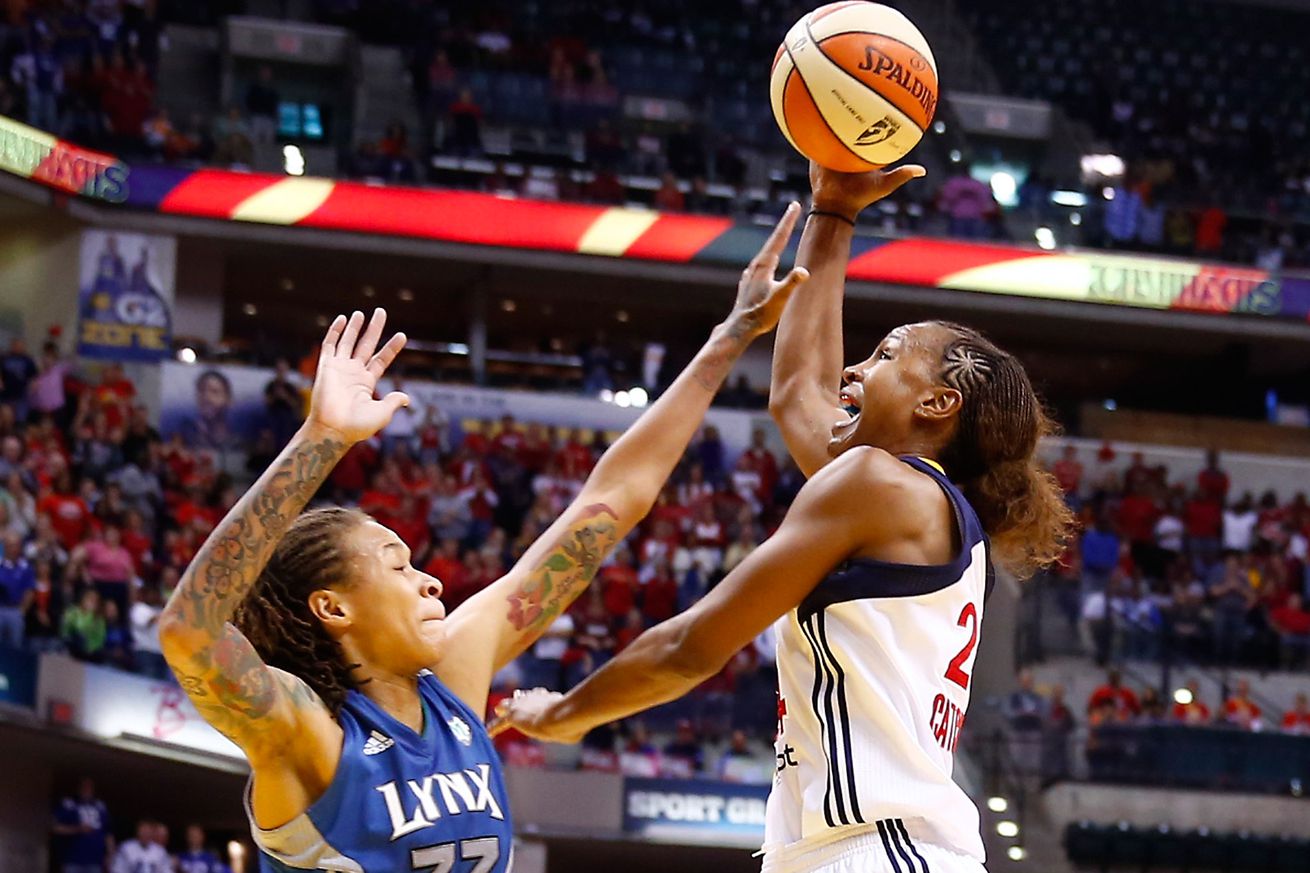 In 2012, Indiana Fever legend Tamika Catchings was still searching for her first WNBA championship. Her path crossed with that a rising powerhouse: the Minnesota Lynx. Here’s how the 2012 WNBA Finals — fondly remembered as one of the best ever — went down.

The Minnesota Lynx drafted Maya Moore of the UConn Huskies at No. 1 overall in 2011, forming a quartet of stars that would go on to make the franchise the dynasty of the decade with four championships.

Moore was a rare talent and a franchise-altering type of player. She fit right in with established Lynx stars Seimone Augustus, Lindsay Whalen and Rebekkah Brunson, who ensured that the leadership and intangibles were already in place for Minnesota before 2011. Moore’s talent immediately took the team to a whole new level; the Lynx went 27-7 in her rookie season and swept the Atlanta Dream to win the 2011 WNBA Finals.

While the Lynx were becoming the WNBA’s newest juggernaut, one of the biggest stars in the league — small forward Tamika Catchings of the Indiana Fever — won the 2011 regular-season MVP award in her tenth season. However, Catchings had yet to win a championship in her storied career.

Catchings and her Fever squad went 21-13 in 2011 before losing to the Dream in the Eastern Conference Finals. The Fever were just a game away from facing the Lynx in the WNBA Finals, having tied the series at one game apiece, but Atlanta pulled away in its third and final game to advance.

In 2012, the Fever got over the hump and into the championship round, a destination they had previously only reached once in 2009. Catchings, who entered the league in 2002, had found a second chance at winning a title.

The Fever, however, were not expected to claim defeat the Lynx, who represented the Western Conference in the Finals for the second straight year. Catchings herself was 32 years old and running out of time to — in the words of Kevin Garnett — “certify” herself as a champion.

During the 2012 regular season, Catchings (17.4 points per game) and guard Katie Douglas (16.5 points per game) were the Fever’s top two scorers. Catchings also led the team in rebounds (7.6), steals (2.1) and blocks (0.9) per game, while finishing second in assists (3.1) behind point guard Briann January.

The Fever opened the season with revenge over the Dream and beat Atlanta in their third game of the season as well. They jumped out to a 4-0 start, but from there it was an up-and-down season until they won five in a row from Aug. 23 to Sept. 1. They finished 22-12, which earned them the No. 2 seed in the Eastern Conference behind the Connecticut Sun (25-9).

Indiana played the Lynx in back-to-back games late in the season, losing by two at home on Sept. 14 and by seven in Minnesota on Sept. 17. At the end of the season, Minnesota sported the same 27-7 record it had in 2011 and entered the playoffs as heavy favorites to repeat as champions.

In the playoffs, the Fever opened against the Dream and lost Game 1 of the Eastern Conference Semifinals. However, Catchings exploded for 25 points and 13 boards in a 103-88 Fever win in Game 2. Indiana went on to win the series 2-1. Douglas had 24 points Game 3, while Erlana Larkins hauled in 20 rebounds to go along with her 16 points.

In the Eastern Conference Finals, the Fever swept the Sun to advance to the WNBA Finals. Douglas dropped 51 points in Games 1 and 2 combined, while Catchings sealed the deal with 22 points and 13 rebounds in Game 3.

Underdogs against the Lynx

The Fever had a lot talent backing up Catchings in 2012. Douglas had her two best 3-point shooting seasons in 2011 (44.0 percent) and 2012 (42.3 percent) and was a four-time All-Star. January was the team’s third-best scorer in 2012 with a 10.3 average, while Shavonte Zellous and Erin Philips were key contributors as well, averaging 22.3 and 21.4 minutes, respectively. Larkins, on the other hand, came out of nowhere to help the team on the glass in the postseason.

But Douglas suffered an ankle injury in Game 3 against the Sun and sat out the entire Finals, making the Fever huge underdogs. Even with Douglas, the Fever’s supporting cast would not have been expected to out-perform Moore, Augustus, Whalen and Brunson, who were all All-Stars in 2011 (there was no All-Star Game in 2012 due to the London Olympics).

It may be odd to think of Catchings, one of the greatest players in WNBA history, as an underdog, but her team truly was one against the mighty Lynx. However, the supporting cast came through when Catchings needed them the most.

Indiana surprised WNBA fans by beating Minnesota 76-70 in Game 1, a contest that saw Larkins pull down 15 rebounds. Augustus scored a game-high 23 points, but Catchings countered that with 20 points of her own.

The Lynx bounced back with an 83-71 win in Game 2. Augustus dropped 27 points, while Moore added 23. Catchings had an even better performance individually than she did in Game 1, but her 27 points and eight boards were to no avail.

Yet, the Fever had done what they needed to do: split in Minnesota to take home-court advantage away from the Lynx as the series shifted to Indianapolis.

In Game 3, the Fever held the Lynx to just 59 points and won to take a 2-1 lead in the series. Brunson’s 12 points led a lackluster offensive performance for Minnesota, while Zellous stepped up to score 30 of Indiana’s 76 points. Larkins also stepped up, notching 15 rebounds, marking her third performance of that many rebounds or more in the playoffs.

And with 25 points, eight assists and three blocks, Catchings ensured that there would be no Game 5.

Whalen did her best to help the Lynx cling to hope, but her 22 points and eight helpers in Game 4 were not enough. Larkins had 13 rebounds, Phillips had 18 points and January and Zellous each scored 15 in the deciding game of the series.

With the win, Indiana secured the franchise’s first-ever championship and removed the weight of the world from the shoulders of Catchings — one of the hardest-working players the WNBA has ever seen. She was a steady force throughout the series en route to being named Finals MVP.

Looking back now, it’s clear that Catchings’ one championship was the most important part of her career — a career that will be honored by her enshrinement into the Naismith Memorial Basketball Hall of Fame on Aug. 29, 2020.

The Fever could have won the Finals in other years. Head coach Lin Dunn led them to the playoffs in all seven of her seasons with the team (2008 through 2014) and in five of those seasons they reached at least the Eastern Conference Finals.

But, as chance would have it, Catchings and company won it all in a season where all the odds were stacked against them. They delayed the rise of a true dynasty, and for that the 2012 Indiana Fever will always be remembered as one of the great underdog stories in WNBA history.