UPDATE: Mulkey speaks out in wake of NCAA Tournament cancellation 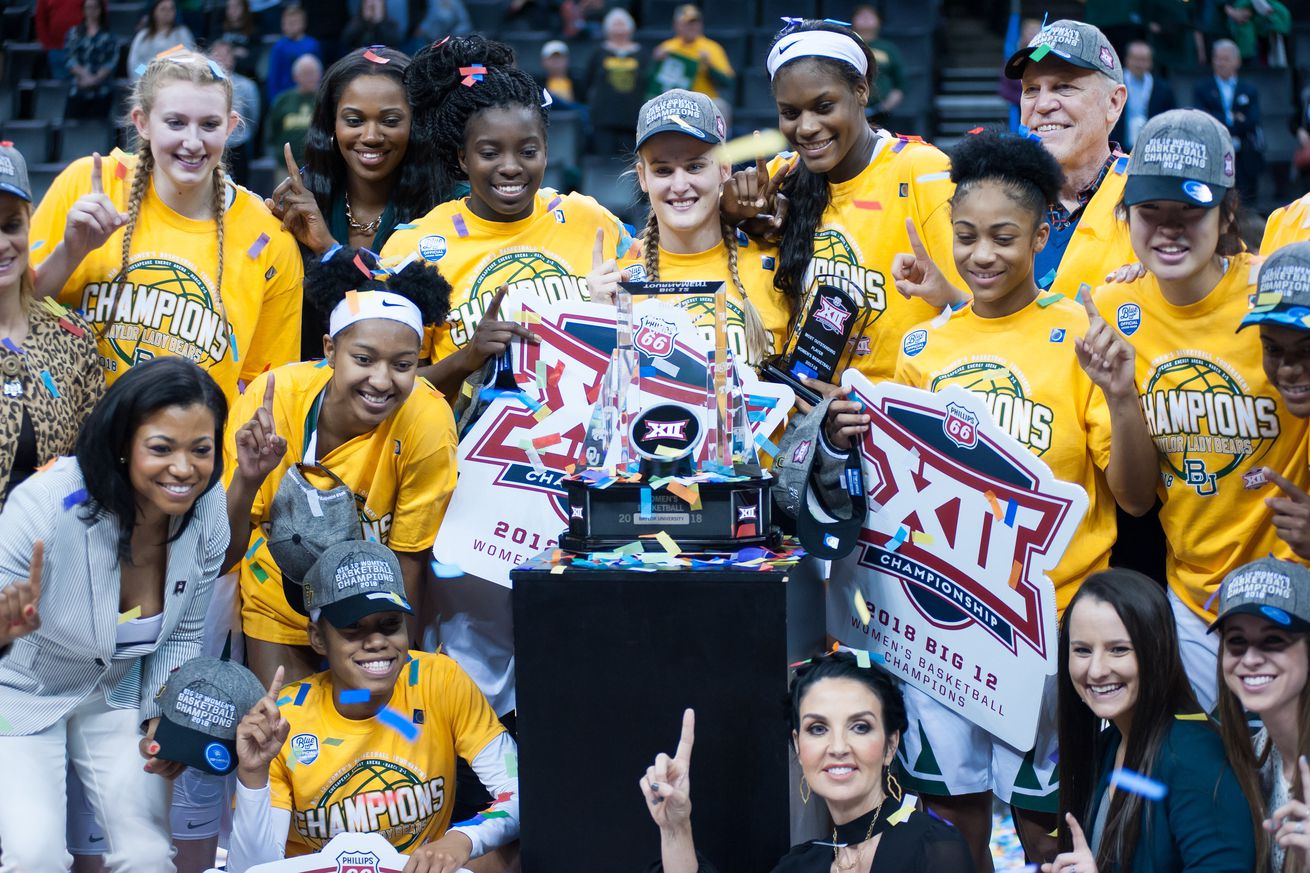 The Baylor women’s basketball team celebrating its win versus Texas during the Big 12 Women’s Championship on March 5, 2018. | Photo by Torrey Purvey/Icon Sportswire via Getty Images

With her Baylor Lady Bears out for an NCAA Tournament title defense, head coach Kim Mulkey is questioning the NCAA’s decision to cancel rather than postpone the event.

The Big 12 Tournament has been cancelled due to public safety concerns related to COVID-19. On the day the tournament was set to start, conference officials posted a statement declaring a suspension of all conference championships and cancellation of the NCAA Tournament.

Yesterday, I was shocked to learn of the NCAA’s decision to cancel, rather than postpone the championship. It would be helpful to all of us to know what information the decision-makers had that resulted in the outright cancellation of the championship, rather than an attempt to delay until the situation improves. I am appreciative that the NCAA is now considering the impact on student-athletes not having a postseason in women’s basketball. It is still my hope that if the current situation improves, the NCAA will make every effort to revive the championship this year. If not, I hope they give serious consideration for seniors to have an additional year of eligibility.

Baylor was picked as a regional one-seed in ESPN’s Bracketology, and favored to return to the Final Four to defend its national title.

The @Big12Conference has announced the immediate suspension of all Conference championships until April 15, resulting in the cancellation of the Phillips 66 Big 12 Basketball Championships.

Conducting future Big 12 championships this season will be evaluated by April 15. pic.twitter.com/HIGxfSrlLn

The top-seeded Baylor Lady Bears are headed to Kansas City this week to defend their conference title. In the past decade, the program has dominated as Big 12 Tournament champs. Since 2011, they’ve accounted for every tournament title except for its loss to West Virginia in 2017. The Bears have compiled 19 consecutive 20-win seasons since head coach Kim Mulkey took over.

Baylor goes into the tournament 28-2 overall, with a 17-1 record in the Big 12 following an upset loss to Iowa State this past Sunday. The Cyclones stunned the Lady Bears with a 57-56 win, with the effort led by Ashley Joens.

The Iowa State victory ended Baylor’s 58-game Big 12 winning streak, which had been the longest active conference-play streak in the nation.From the Cyclones’ perspective, the win was their second-ever against the No. 2 team in the nation; they got their first against the Texas Tech Raiders in 2004.

Baylor’s Lauren Cox is averaging 12.5 points, 8.4 rebounds, 3.6 assists and 2.7 blocks in the 22 games she has played; she missed part of the season with a foot injury. She is expected to be a top-three pick in the 2020 WNBA Draft this April but for now remains focused on March Madness. The Lady Bears are the favorites to win the tournament, with a loaded squad that’s ready to defend its national title in the “Big Easy.”

The No. 2 TCU Horned Frogs (22-7, 13-5 Big 12) will come in with a chip on their shoulders. They’ve proven they can hang with Baylor but have come up short in both contests this season. Despite their best efforts, TCU is still missing a star who can take over in the final minutes. Lauren Heard has anchored the team; she is averaging 18.4 points and 6.6 rebounds per game. The Horned Frogs, who joined the conference in 2012, are still eyeing their first Big 12 Tournament title.

The No. 3 Texas Longhorns (19-11, 11-7 Big 12) have struggled at times to find their offensive identity this season. If they don’t get off to a solid start early, expect them to struggle against No. 6 West Virginia. The Longhorns haven’t won a Big 12 Tournament since 2003.

TCU and Texas have been neck-and-neck during conference play, with Horned Frogs eventually edging out the Longhorns. Don’t be surprised if they battle it out one last time this season, in the semifinals.

In the opening round, No. 8 Oklahoma State faces No. 9 Oklahoma in a Bedlam battle. The in-state rivals have struggled in seasons past, but this game is bigger than a tournament. Bedlam is all about pride, bragging rights and in-state recruiting. Expect a fun first-round matchup.

No. 4 Iowa State, energized by its upset over Baylor, plays No. 5 Kansas State. Expect a ton of shooting from behind the arc but this is anyone’s game.

Baylor gets going in the quarterfinals against either Oklahoma State or Oklahoma. Though the Lady Bears are expected to cruise to an easy repeat and roll right into the NCAA Tournament, the rest of the Big 12 won’t go down without a fight.

Fans, unfortunately, will have to watch it all on television. The Big 12 issued a statement on Wednesday announcing a ban on fan attendance, which conference commissioner Bob Bowlsby explained in a video posted to Twitter.

Beginning with tomorrow’s tournament games, we will be implementing limited access. Teams will have access to 125 tickets for staff and guests of student-athletes.

For the full announcement and more details ⤵️ pic.twitter.com/8W7h565eGn