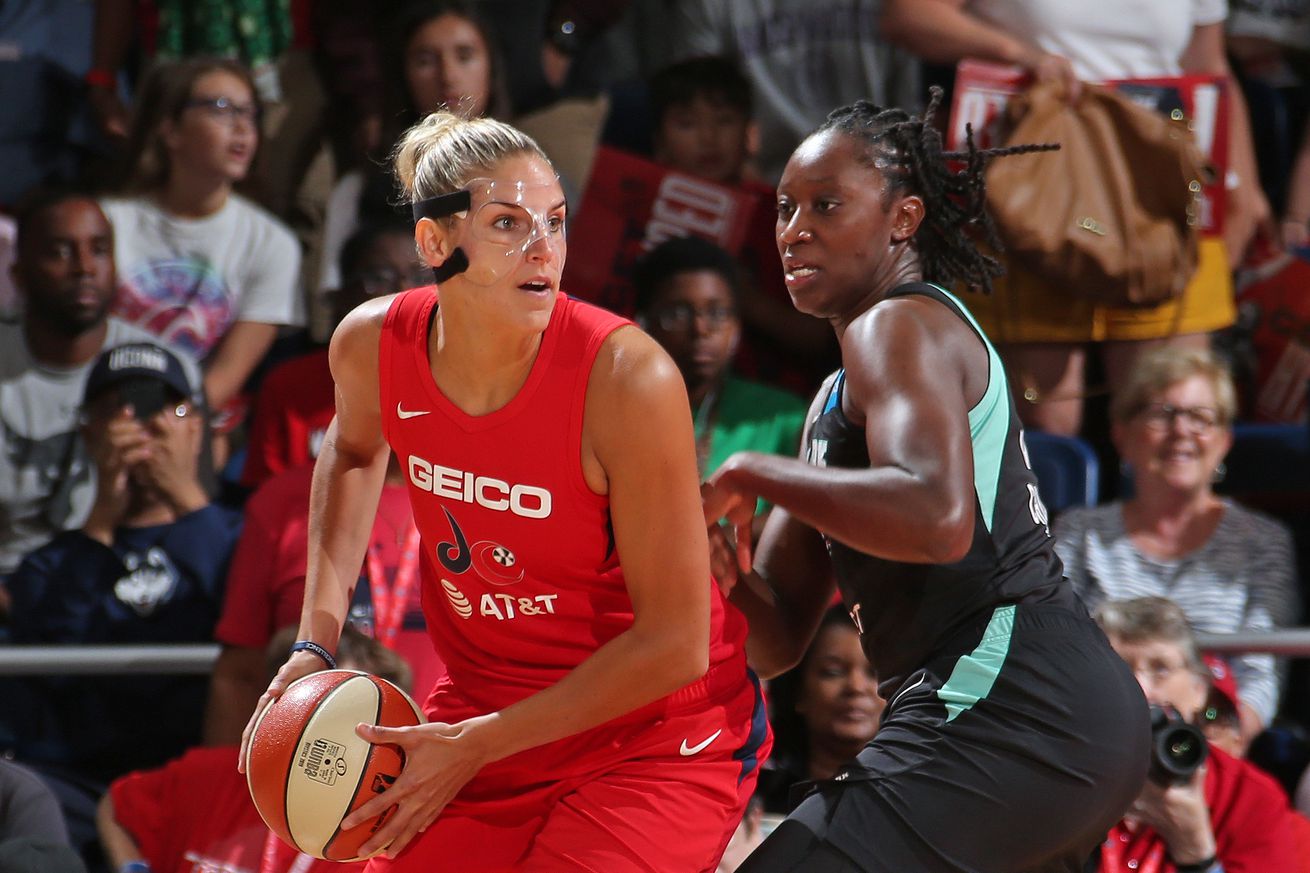 Will we get the opportunity to watch MVPs Elena Delle Donne and Tina Charles suit up for the same team in 2021? | Photo by Stephen Gosling/NBAE via Getty Images

The Washington Mystics never got a chance to defend their 2019 title, losing a significant part of their roster before even arriving at the Bradenton bubble. Theoretically, they’ll be able to bring most of those players back for 2021, but it won’t be easy.

After a thrilling and unprecedented bubble season in 2020, Swish Appeal has decided to examine what each WNBA team needs the most heading into what will hopefully be a more normal 2021 season. Here’s a look at what the Washington Mystics need to do this offseason:

The Mystics put together arguably the greatest offensive performance in WNBA history in 2019, fielding a roster full of shooters and multi-talented offensive skillsets and overwhelming opponents en route to the first championship in franchise history. Elena Delle Donne earned league MVP honors after a historically efficient scoring season, but that was just the tip of the iceberg. Washington surrounded Delle Donne with an abundance of shooting (Emma Meesseman, Kristi Toliver, Tianna Hawkins, Aerial Powers) and defensive versatility (Natasha Cloud, Ariel Atkins, LaToya Sanders), forming what looked to be a dynasty in the making.

One tumultuous offseason later, the 2020 Mystics barely resembled the squad that rolled to the WNBA championship just months prior. Both Delle Donne and the newly-acquired Tina Charles sought medical exemptions, citing preexisting conditions that would put them at greater risk of contracting COVID-19. Meanwhile, Cloud and Sanders opted out of the season, and Toliver left for the Los Angeles Sparks in free agency.

With nearly their entire starting lineup missing, the Mystics got off to a better-than-expected 3-0 start but lost 13 of their next 14 as their lack of depth caught up to them and other teams adjusted. While Washington was still able to sneak into the playoffs as the No. 8 seed — and was a Shey Peddy buzzer-beater away from advancing to the second round — it was never a team that had a realistic chance at competing for a title — a far cry from the air of inevitability surrounding the team’s 2019 title.

The Mystics will have a shot at returning to contention in 2021, assuming the COVID-19 pandemic has subsided to a point where players feel comfortable playing again, of course. But it’s going to take quite the effort from head coach and general manager Mike Thibault to get the band back together. And, even then, he might have to make some concessions.

Can Washington fit enough pieces together for 2021?

While the Mystics are far from the only championship-caliber WNBA team facing big decisions entering the offseason, they may have even more hoops to jump through than rivals like the Los Angeles Sparks or Connecticut Sun.

Per The Next’s WNBA salary database, Washington has just five players under contract heading into 2021, with Meesseman, Sanders, Charles, Cloud, Hawkins and Powers all currently free agents. While Cloud and Sanders are “Suspended-Contract Expired” players (meaning that Washington owns their exclusive negotiating rights), the rest are unrestricted free agents who will immediately be free to sign with any team.

That’s a lot of negotiating, and it’s going to be difficult for Thibault to retain all of those players and stay under the WNBA’s salary cap. As explained by Her Hoop Stats’ Richard Cohen, Powers in particular is likely to draw significant interest from other teams, while Meesseman has incentive to skip the 2021 season due to international commitments. Even Sanders, who has been Washington’s defensive fulcrum for years now, isn’t a sure bet to return. She’ll be 34 years old next year and with Myisha Hines-Allen breaking out in 2020, Thibault may have to consider saving that money to keep the younger player. Factor in Charles — a former MVP who is likely to command a significant paycheck herself — and things get crowded quickly, both on the court and in the books.

Even if the Mystics can only keep some of their free agents instead of all of them, the star power of Delle Donne and glut of talent elsewhere on the team’s roster will almost certainly have them in contention in 2021. There’s a difference, though, between “contender” and “favorite,” and Thibault has his work cut out for him if the Mystics are to once again be the latter.