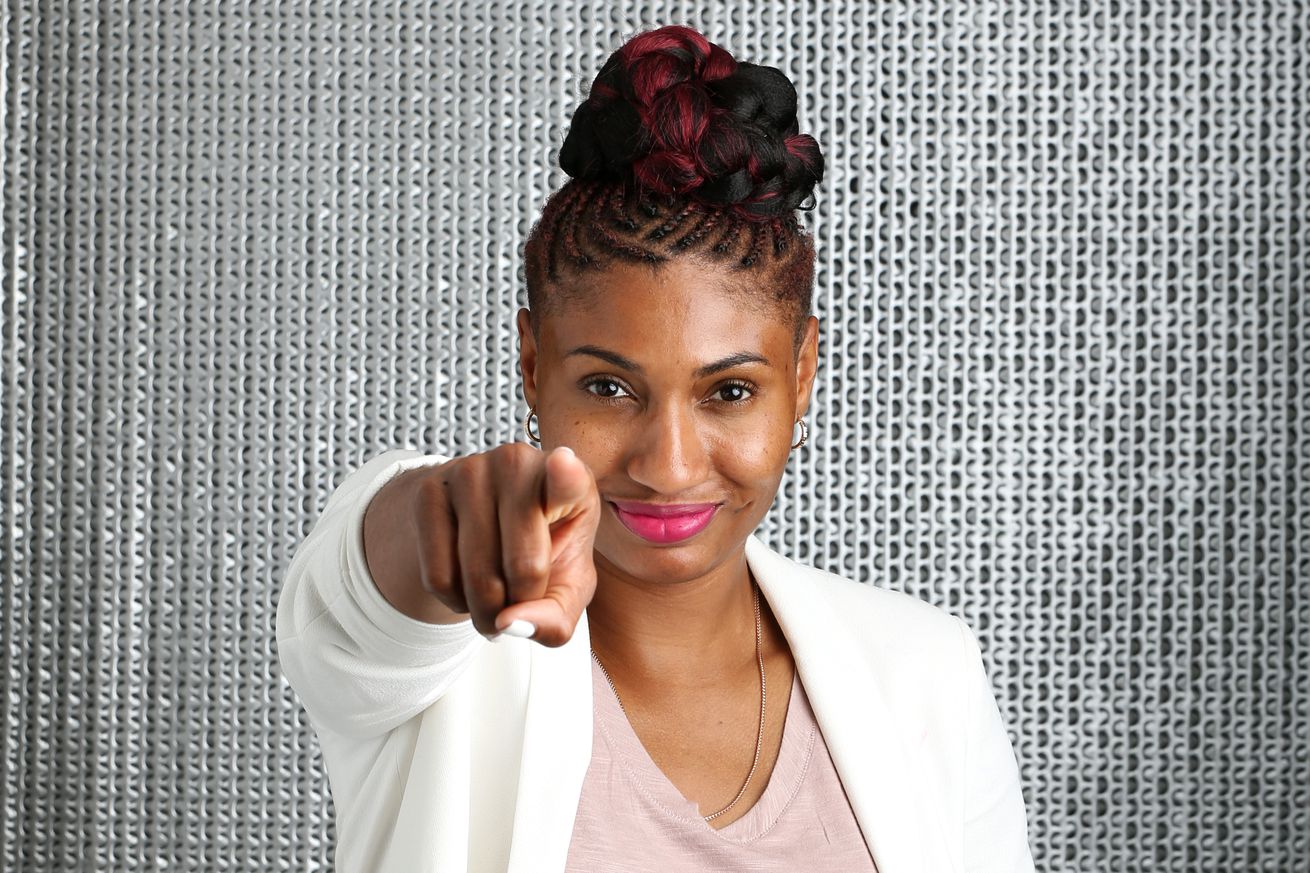 Angel McCoughtry is calling on the WNBA to marshal the power of its platform and allow players’ jerseys to name Black victims of police violence. | Photo by David Sherman/NBAE via Getty Images

To ensure the WNBA contributes to efforts for racial justice when the season starts, veteran Angel McCoughtry and the Las Vegas Aces have proposed #SayTheirNames jerseys.

How can the return of basketball contribute to racial justice?

As the WNBA and NBA prepare to return, players from both leagues have offered solutions to this complicated question. For some, racial justice supersedes sport. The Atlanta Dream’s Renee Montgomery and Washington Mystics’ Natasha Cloud have opted out of the 2020 WNBA season in favor of activism, while a group of NBA players, highlighted by the Brooklyn Nets’ Kyrie Irving and Avery Bradley and Dwight Howard of the Los Angeles Lakers, have questioned whether the NBA’s return can benefit racial justice.

For others, returning to the arena is an opportunity to raise awareness. LeBron James recently announced his “More Than a Vote” initiative, with the Phoenix Mercury’s Skylar Diggins-Smith, among others, serving as an ambassador.

WNBA and NBA leadership have emphasized that playing provides athletes with a powerful platform. Michele Roberts, executive director of the NBPA, has invoked the example of John Carlos and Tommie Smith, who raised their black-gloved fists on the medal stand at the 1968 Olympic Games. Likewise, WNBA commissioner Cathy Engelbert has suggested, “At a time like this, we can continue to amplify our voices. With Black Lives Matter, with representing women, with causes that are important to our league. There’s an opportunity to really do this right.”

Yet, the ability to serve as an escape is part of sports’ power. It is all too easy too indulge in and obsess over fast breaks, defensive rotations, 3-point percentages and crossover dribbles. In an interview with ESPN, NBA commissioner Adam Silver exposed the tension between escapism and activism, arguing that the NBA’s return will serve as a needed distraction and at the same time stimulate conversations about social justice.

“For us, we feel that this is what we do: We put on NBA basketball,” Silver stated. “We think that for the country, it’ll be a respite [from] the enormous difficulties people are dealing with in their lives right now.”

“And in terms of social justice issues, it’ll be an opportunity for NBA players in the greater community to draw attention to the issues because the world’s attention will be on the NBA in Orlando if we’re able to pull this off,” he added.

Angel McCoughtry, however, may have found a way to resolve the tension between the PLAY and DON’T PLAY camps.

On Monday, McCoughtry revealed that she and the Las Vegas Aces are working with the WNBA to arrange for players’ uniforms to feature the names of Black citizens killed by the police.

I will be playing this upcoming @wnba and I am looking forward to continue to fight social injustice issues while playing and supporting front line workers. ⠀ ⠀ I am currently working with the @lvaces and @wnba to use our voices, our uniforms, and our sport to continue to impact and create real change. I am creating a petition (LINK IN BIO) to allow players the ability to put the FIRST & LAST NAME of HUMAN BEINGS that who have been injured or KILLED in incidents involving POLICE BRUTALITY! Even Front line workers during the pandemic The goal is also to create a relationship with the families of who’s name the athlete has chosen. This is a way to use our platform to be a helping hand during these trying times. Silence is an ally for EVIL and when sports resume WE WILL NOT BE SILENT. ⠀ ⠀ #SayTheirNames ⠀ #blacklivesmatter ⠀ #thetimeisnow

While McCoughtry suggests players also could wear jerseys naming front-line workers, limiting the names to Black victims of state-sanctioned violence would amplify the power of this action and underscore the ethos of #BlackLivesMatter.

During the 2019 She Believes Cup, the US Women’s National Soccer Team celebrated “powerful, influential, iconic and inspirational women” by wearing the names of everyone from Ruth Bader Ginsburg and Cardi B to Elena Delle Donne on the backs of their jerseys. The jerseys recognized the breaking of barriers — those who have, in different ways and in different spaces, succeeded in spite of challenges based on gender, race and sexuality. In short, the jerseys were designed to make fans feel good.

In contrast, WNBA jerseys with the names of dead Black people murdered by the police would do the opposite.

Which is the point.

The names of Breonna Taylor or George Floyd or Tony McDade or anyone else from a too-long list would serve as discomfiting reminders of the brutality and oppression that still exist in America. The jerseys would be signs urgency, not inspiration. They also would collapse the false distinction between the Black athletes who perform on the basketball court (often for the pleasure of white fans) and Black people trying to make their way in the world (often ignored by white people).

As Sue Bird pointedly asked while hosting the 2020 ESPY Awards, “Do Black lives matter to you when they’re not throwing touchdowns, grabbing rebounds, serving aces? If that was uncomfortable for you to hear, good.”

Wearing the names of the Black victims of police violence prevents basketball from becoming an easy distraction.

Even as fans revel in an hesi-dribble and drive from McCoughtry, a turn-around jumper on the block from A’ja Wilson or a pull-up 3-pointer from Kayla McBride, they would be reminded of Taylor, Floyd and other overlooked victims of America’s enduring sin.

In sum. McCoughtry’s proposal would contribute to the WNBA’s effort to make its return “Bigger Than Ball.”