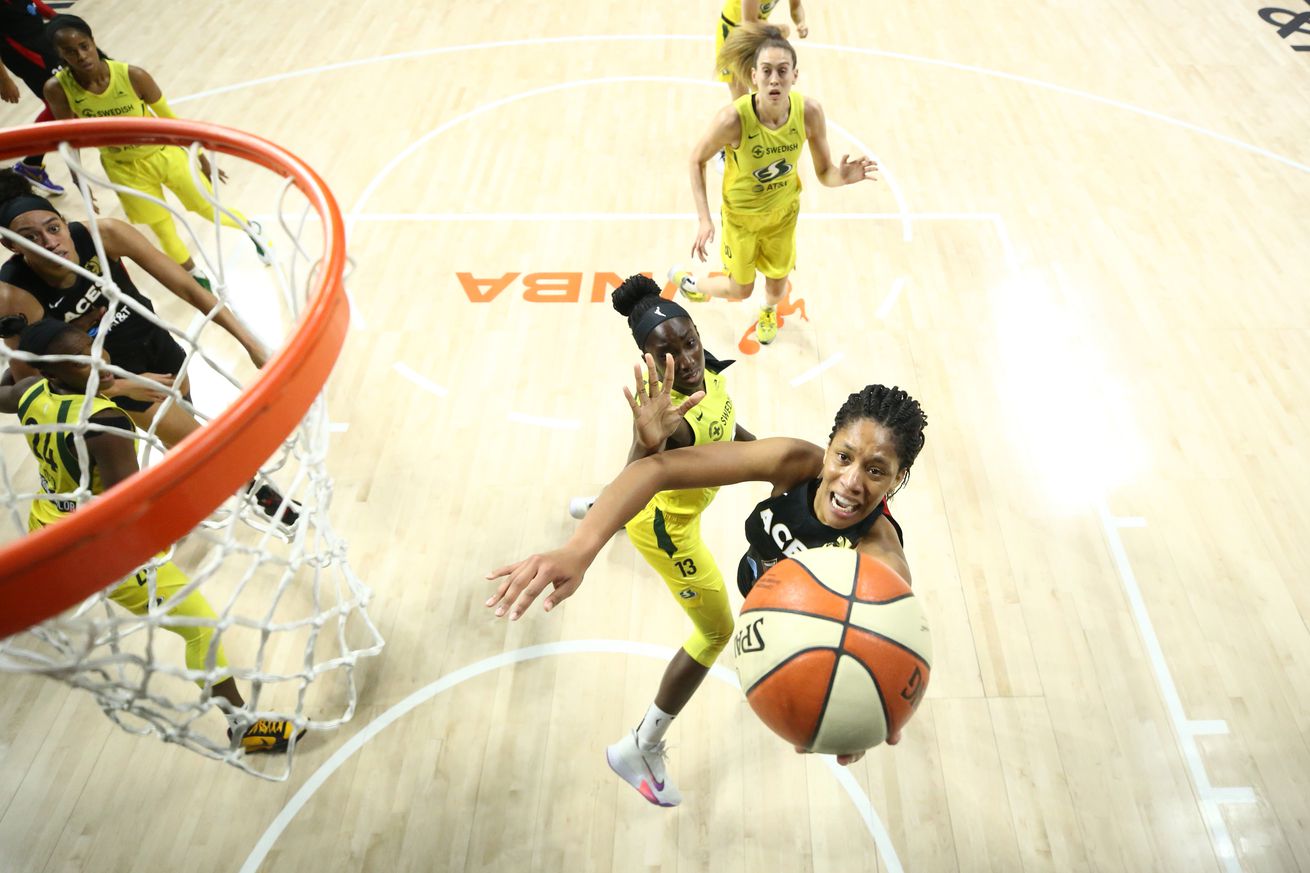 A’ja Wilson put on a show in the Aces’ biggest game of the season. | Photo by Ned Dishman/NBAE via Getty Images

The Las Vegas Aces easily beat the Seattle Storm. However, the best games of the weekend took place on Sunday as all three games were decided by a combined seven points.

The Las Vegas Aces moved within half a game in the standings behind the Seattle Storm, winning a close head-to-head matchup 82-74. The Aces outscored the Storm 26-11 in the second quarter which held the Storm at bay the rest of the game.

A solid performance from @justDROB with 16 points, 4 rebounds, and 7 assists which moved her to #️⃣1️⃣9️⃣ on the @WNBA All-Time Assists Leader board. #ALLIN ♦️♠️ pic.twitter.com/qodqxrWs4k

The Aces, especially A’ja Wilson, were just more aggressive than the Storm, proof in their 20-of-25 effort from the free throw line whereas the Storm were just 11-of-14. Wilson was 9-of-12 from the charity stripe. The Storm will walk away from this one haunted by their 7-of-26 effort from beyond the arc.

The Aces and the Storm both return to action Tuesday, August 25 before facing each other again on Thursday, August 27. The Aces face the Dallas Wings in their next game while the Storm take on the Indiana Fever.

A career-high 26 points by Kaleah Copper and a 15-point first quarter lead by the Chicago Sky were instrumental in beating the Indiana Fever. Candice Dupree led the Fever with 18 points. Although the Fever shot 53.7 percent on the night, it was their 4-of-16 performance from the 3-point area that was their downfall. | Box Score

The Connecticut Sun shot 44.6 percent from the floor to the New York Liberty’s 37.0 percent, and the Sun made 13 more shots and attempted an additional 20 shots in comparison to the Liberty. Additionally, the Liberty committed 18 turnovers which led to 33 points for the Sun. The Sun’s Alyssa Thomas’ 25 points led all scorers. | Box Score

The Atlanta Dream forced Crystal Dangerfield into an off-balance heave from beyond the arc that sealed the win. The Dream overcame an 11-point halftime deficit in the third quarter on the strength of 58.8 third period shooting performance. Monique Billings’ recorded her fourth double-double of the season with 16 points and 13 rebounds. Betnijah Laney contributed her second straight double-double with 16 points and 10 assists. | Box Score

Brittney Sykes scored a season-high 23 points as Candace Parker stuffed the box score with her seventh double-double of the season with 22 points, 14 rebounds and six assists. The Sparks trailed by 10 points early in the fourth, 71-61 with eight and a half minutes to play and five minutes later a Te’a Cooper 3-point shot put the Sparks up for good, 79-76. | Box Score

Diana Taurasi, who wore No. 8 to honor Kobe Bryant’s birthday, scored a season-high 34 points with seven made 3-point shots, just one off her career-high. Kia Vaughn, Brittney Griner’s replacement, scored 16 points, her best game of the season so far. Brianna Turner scored eight points but recorded a career-high 17 rebounds. The Mystics’ 14 made 3-points shots kept them in it but it was not enough. | Box Score

Did you expect anything else? pic.twitter.com/I9pyx2cH0r