Weekend Recap: CP3 is soaring and, therefore, so are the Sparks 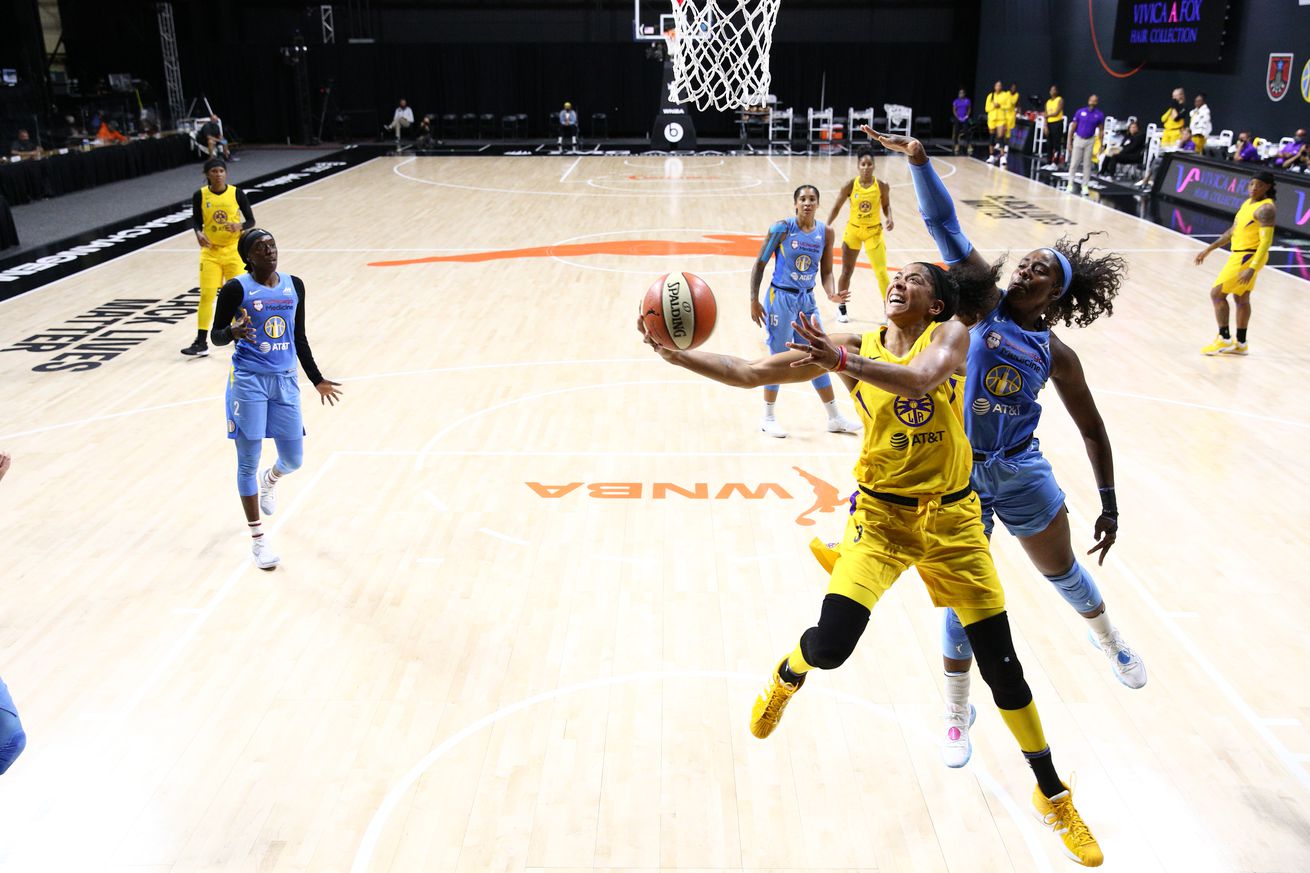 Candace Parker (with ball) continues to make her case for MVP. | Photo by Ned Dishman/NBAE via Getty Images

The Los Angeles Sparks overcame a first-quarter deficit to beat the Chicago Sky and keep pace with the Las Vegas Aces and Seattle Storm as the race at the top of the standings heats up.

The Los Angeles Sparks overcame an early deficit to claim an 86-80 victory and hand the Chicago Sky their third-straight defeat.

The Sky led by eight points after the first quarter. By the end of the third, however, the Sparks had the lead and would never relinquish it in large part due to Candace Parker’s 24 points and 15 rebounds, for her 10th double-double of the season. It was also Parker’s third-straight 20-point performance, which bodes well for her MVP candidacy.

Big time shot for the @LASparks as they look to pull away here in the 4th.

Tune in to @CBSSportsNet to catch this EXCITING ending! pic.twitter.com/aluDhqKDf7

In Chicago’s loss, Cheyenne Parker put up a career-high 24 points and 10 rebounds and Allie Quigley added 22 points but shot just 8-of-23 from the field. The Sky’s 3-point shooting woes continued as well, with the team shooting 8-of-27 from beyond the arc.

The Sparks take the court against the New York Liberty on Tuesday, Sept. 8, and the Sky will face the Atlanta Dream on Wednesday, Sept. 9. The Sparks, who are involved in a three-way bid with the Las Vegas Aces and Seattle Storm for the two top spots, will likely have their playoff positioning decided on the regular season’s final day.

The Sun separated themselves from the teams behind them in the standings with a big win over the Fever. DeWanna Bonner led all scorers with 26 points and an impressive 9-of-9 performance from the free-throw line. As a team, the Sun were 21-of-22 from the charity stripe. Indiana had trouble generating offense and turned the ball over 19 times to just six lost possessions for the Sun. The Fever also attempted eight fewer shots. | Box Score

The Aces’ dynamic offense was on full display in their win over the Dream. A’ja Wilson led the way with 21 points and Kayla McBride and Angel McCoughtry scored 18 points apiece. Jackie Young came off the bench to score 18 points with Dearica Hamby contributed 11 points and nine rebounds. The Dream had four starters in double figures but made just four of their 12 attempts from 3-point range. | Box Score

Skylar Diggins-Smith scored a season-high 30 points in what was an unimpressive offensive game for the Mercury, who shot 41.3 percent from the floor. Thus, it was the Liberty’s 27.2-percent shooting performance, including 11.4 percent (4-of-35) from 3-point distance, that was the story. The lone bright spot for New York was rookie Joyner Holmes, who recorded her first career double-double of 13 points and 13 rebounds — also career highs. The win marks six straight for Phoenix. | Box Score

Arike Ogunbowale scored a career-high 39 points, hit a clutch 3-point shot and scored nine of her team’s 15 points in overtime. Satou Sabally scored 19 points as she and Ogunbowale combined for 21-of-24 points from the free-throw line. In defeat, Ariel Atkins poured in 22 points for the Mystics and Myisha Hines-Allen recorded her eighth double-double of the season with 20 points and 13 rebounds. | Box Score

Natasha Howard led the Storm with 19 points and was one of five Storm players to score in double figures. Damiris Dantas, in defeat, led all scorers with 22 points. The Lynx lost even though they out-rebounded the Storm 34-24, slightly bested them in 3-point makes (12 threes to 11) and nearly matched the Storm’s 22 free throws with 18 of their own. Minnesota’s 24 turnovers, however, led to 28 points by the Seattle, while the Lynx scored just 14 points off the Storm’s 12 turnovers. | Box Score

Sun and Storm on brink of advancing to WNBA Finals