Weekend Recap: Riquna Williams was perfect from downtown in the Sparks blowout of the Lynx 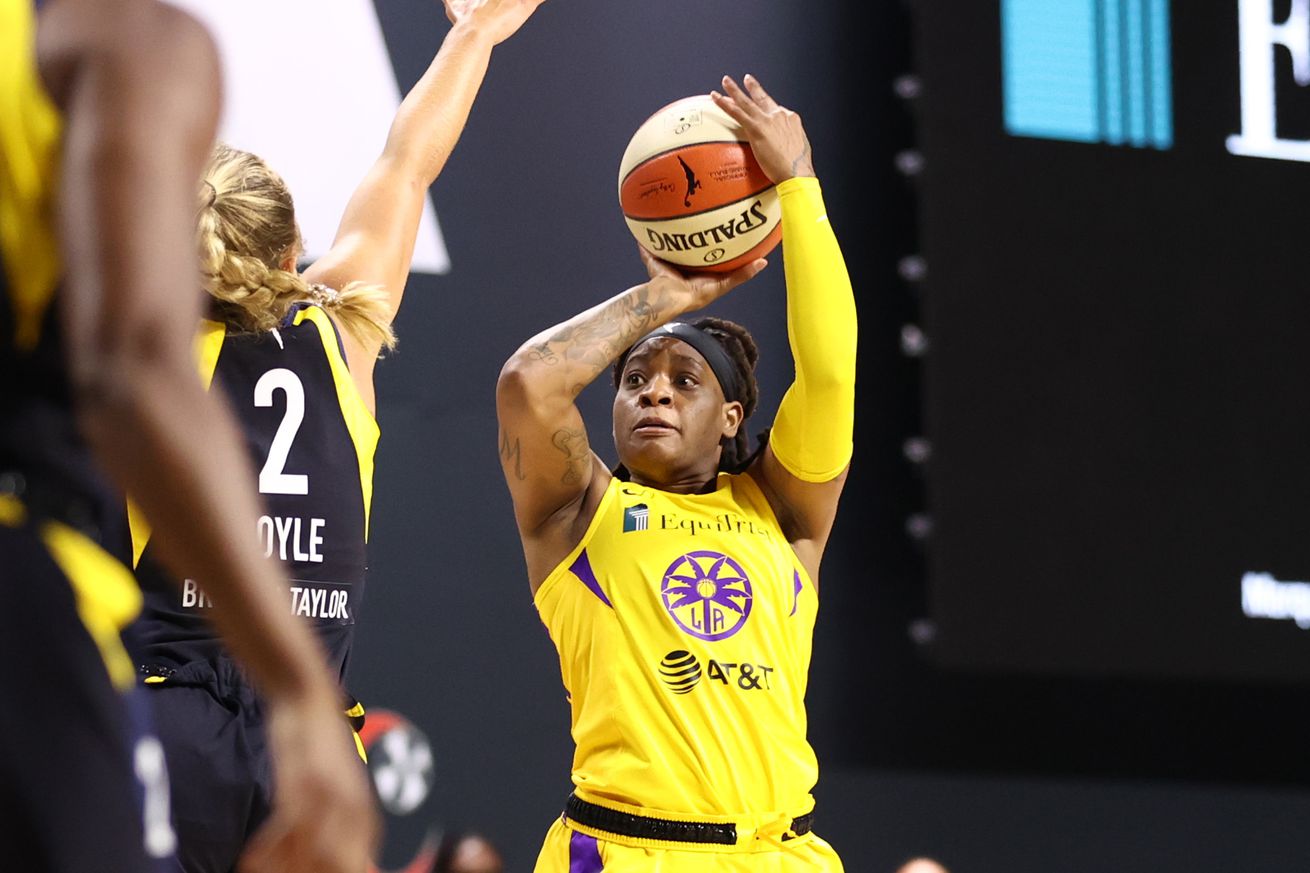 Riquna Williams was on fire against the Minnesota Lynx. | Photo by Ned Dishman/NBAE via Getty Images

The Los Angeles Sparks ended the Minnesota Lynx’s four-game winning streak in a blowout. The Seattle Storm maintained form against the Phoenix Mercury and the Chicago Sky slid into second place with a win against the Connecticut Sun. The Las Vegas Aces clinched a late-game victory over the New York Liberty and the Indiana Fever handed another loss to the Washington Mystics. The Dallas Wings repaid the Atlanta Dream in a 10-point victory.

The Los Angeles Sparks’ streak of alternating wins and losses with the Minnesota Lynx continued with a 97-81 win. Sylvia Fowles was a game-day scratch and the Lynx were ineffective on offense. The loss ended Minnesota’s four-game winning streak.

With two-and-a-half minutes to go in the third quarter, the Lynx were clinging to a 61-59 lead after a layup from Crystal Dangerfield. Two Sparks possessions later, Riquna Williams scored five of her team-high 21 points and put the Sparks in front 64-61. Los Angeles never relinquished the lead.

The Sparks impressed on offense with 65.2 percent shooting, including a lights-out final quarter in which L.A. shot 12-of-15. The Sparks made a season-high 13 shots from 3-point range, which helped offset their 20 turnovers.

Williams’ performance off the bench — 21 points on 7-of-9 shooting, including 5-of-5 from beyond the arc — dazzled. Candace Parker just missed a triple-double game with 11 points, 10 rebounds, and nine assists. And in her first game against her former team, Seimone Augustus scored 13 points off the bench.

purple and gold looks better on her anyways ‍♀️ https://t.co/rYtjGobST4

Five Sparks players attempted more than five — but fewer than 10 — shots, with all five scoring in double figures. That level of efficiency will be hard to match by any team for the rest of the season.

The Lynx played a clean game, with just 12 turnovers, but were unable to find Sparks-level success on offense — they shoot 40.6 percent. Crystal Dangerfield asserted herself with 29 points on 9-of-17 shooting. Damiris Dantas, in place of Sylvia Fowles, scored 15 points but on 5-of-16 shooting.

YOU A BAD WOMAN, CRYSTAL

The Lynx look to rebound on Tuesday against the Washington Mystics, who are looking to stop a four-game losing streak. Also on Tuesday, the Sparks face the New York Liberty, who let their last game, against the Las Vegas Aces, slip away after leading much of the way.

Arike Ogunbowale led all scorers with 24 points. Kayla Thornton poured in a season-high 17 points and three made 3-point shots. The Dream had four players score in double figures but only shot 40.8 percent from the floor. Atlanta was stunted to an abysmal 5-of-22 shooting performance in the final quarter. | Box Score

The two teams combined for 37 turnovers and each shot below 40 percent. Yet, on the strength of 12-of-24 shooting from deep, the Seattle Storm controlled the game. Jewell Loyd and Britney Griner were the game-high scorers with 20 points apiece. Diana Taurasi left the game with a back injury and did not return; she finished with 14 points. | Box Score

The Chicago Sky led the the Connecticut Sun wire-to-wire, taking leads as large as 12 points. Despite a combined 40 turnovers, each team shot over 55 percent, with Allie Quigley scoring a game-high 22 points. Cheyenne Parker added 20 points and was a perfect 12-of-12 from the charity stripe. Free throws were the difference-maker; the Sky were 29-of-32 from the line while the Sun were 16-of-21. | Box Score

The Las Vegas Aces trailed the entire second half until a basket by Angel McCoughtry, with just over a minute left in regulation, tied the game at 76 apiece. A’ja Wilson made the game-winner with 6.9 seconds remaining, capping a 31-point performance. The Liberty were just 5-of-15 in the final quarter after leading most of the way. | Box Score

The Indiana Fever closed the second quarter on an 18-4 run and never let the Washington Mystics get closer than four points the rest of the way. Kelsey Mitchell scored a game-high 29 points as the Fever shot 50 percent as a team. On a night when Aerial Powers (hip) did not play, the Mystics shot 37.7 percent and could never get the stops needed to get back into the game. | Box Score