Weekend Recap: The Sky hand the Mystics their first loss of 2020 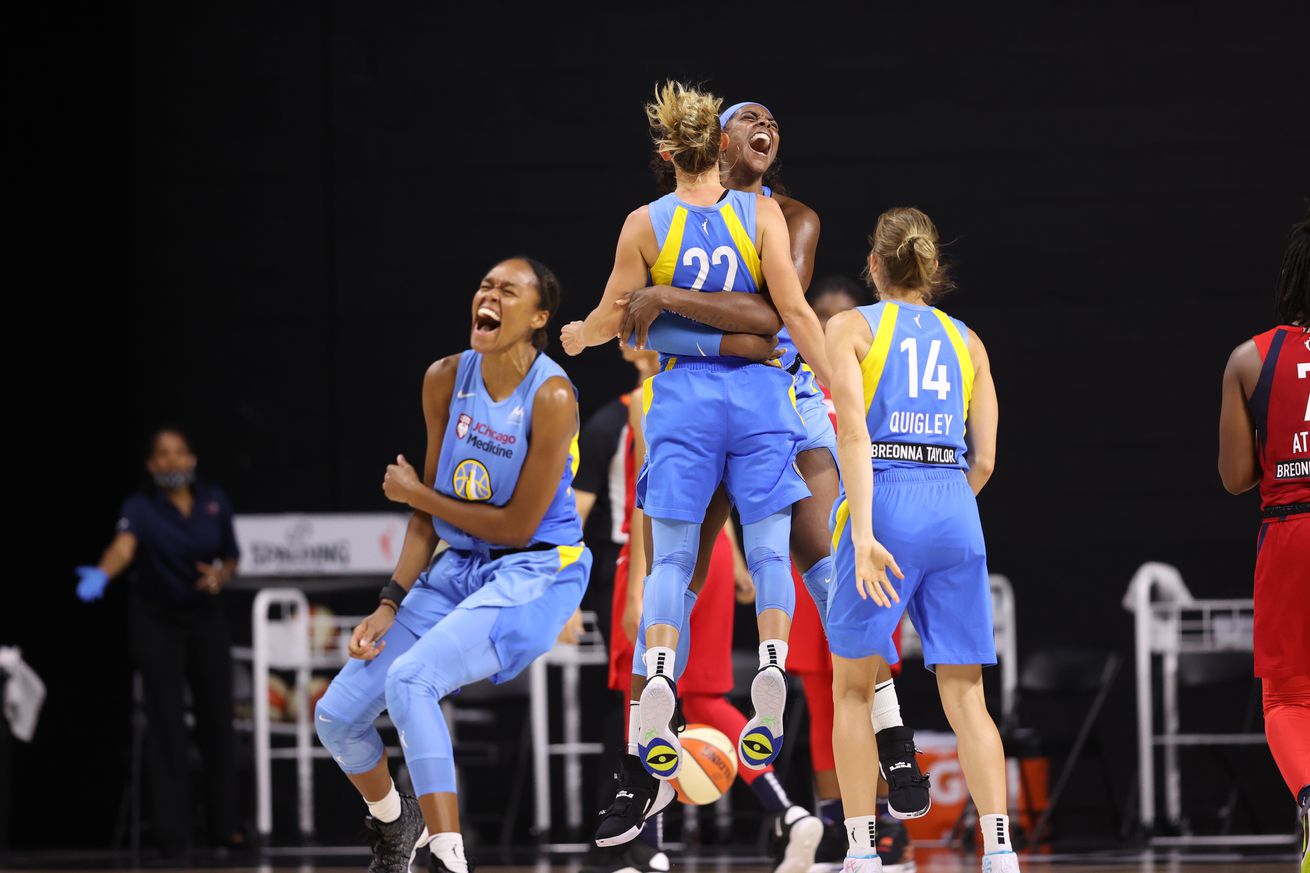 The Chicago Sky celebrate after Cheyenne Parker hit a late-game layup that became the game-winner. | Photo by Ned Dishman/NBAE via Getty Images

In the second weekend of WNBA action, the Chicago Sky beat the Washington Mystics in an 88-86 thriller. Also, the Seattle Storm bounced back from a blowout loss and the New York Liberty’s losing woes continued against the Phoenix Mercury rising.

In the game’s dying seconds on Saturday, the Chicago Sky handed the Washington Mystics their first loss of the 2020 season.

Diamond DeShields’ dribble penetration set up a shot for Cheyenne Parker, who hit the game-winning shot with 5.9 seconds remaining to lift the Sky to an 88-86 victory. After the Sky took the lead, Azurá Stevens’ strong defense on Emma Meesseman forced a bad pass and the Mystics were unable to get a shot off to tie or win the game.

In addition to shooting 41.9 percent, the Mystics were in the game because of their ability to get to the charity stripe, where they completed 16-of-20 attempts. The Sky’s offense executed well — 51.4 percent shooting from the field, including 12 makes from 3-point range.

For Washington, in defeat, Ariel Atkins led all scorers with 24 points, and it was Atkins’ free throws in the final minute of the quarter that kept the Mystics in the game. Aerial Powers scored 20 points and a record seven rebounds. Myisha Hines-Allen recorded her second double-double of the season with 13 points and 12 rebounds.

Gabby Williams and Cheyenne Parker led the Sky in scoring with 16 points apiece; Williams is averaging 11.2 points off of the bench. Allie Quigley scored 15 points on 6-of-13 shooting and Kahleah Copper scored 14 points after contributing just six in the Sky’s prior outing.

Diamond DeShields, who set up the game-winner, scored a season-high 10 points off the bench.

The Sky return on Tuesday, August, 4 to face the Dallas Wings, who lost to the Las Vegas Aces on Sunday. The Mystics will face the Aces on Wednesday, August 5.

This weekend’s other action

Sylvia Fowles helped the Lynx to victory with a double-double of 21 points and 13 rebounds and Napheesa Collier contributed 17 points on 7-of-7 shooting and nine rebounds. Shooting 34.9 percent for the game, the Sun were outscored 43-27 in the second half despite DeWanna Bonner’s 28 points. | Box Score

The Los Angeles Sparks mounted a comeback after trailing for large portions of the game but never got closer than three points. In case there was any doubt, Breanna Stewart is back. The 2018 league and Finals MVP led all scorers with 21 points while also recording nine rebounds, five assists, and four steals. | Box Score

The Liberty’s first game without Sabrina Ionescu, who will be out at least one month with an ankle injury, was disastrous. The Liberty shot 24.7 percent and were an abysmal 5-of-35 from beyond the arc. Their 30 missed 3-point shots is the most in league history. Bria Hartley came off the bench for Phoenix to score 27 points against her former team. | Box Score

A’ja Wilson led the Aces with 19 points and eight rebounds and she had some help from her bench, which outscored the Wings’ bench 27-12. The Wings shot 36.8 percent and were a bleak 4-of-30 from beyond the arc. Arike Ogunbowale led all scorers with 20 points for Dallas, but she did so on 10-of-22 shooting. | Box Score