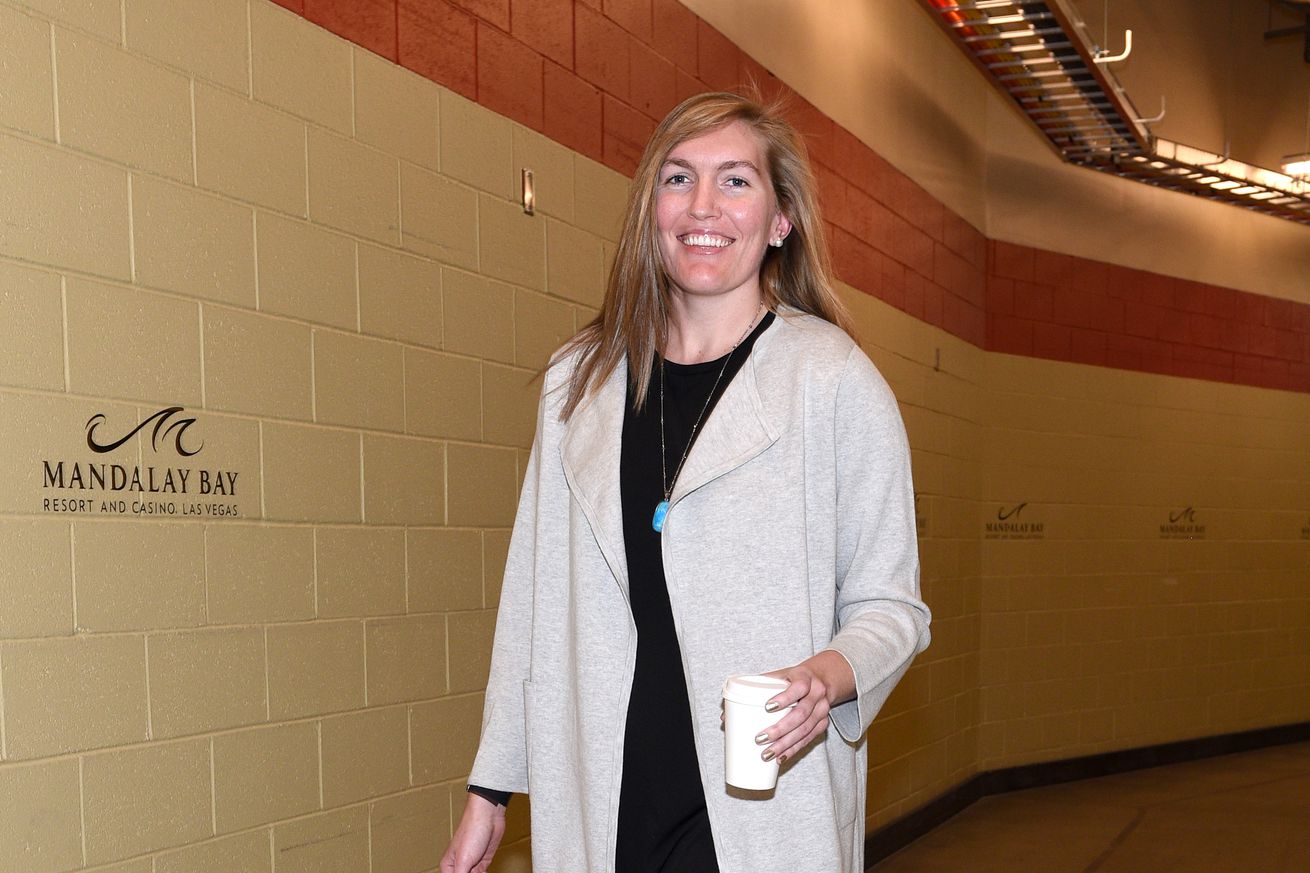 Carolyn Swords, in what may be her workplace attire henceforth. | Photo by David Becker/NBAE via Getty Images

From Angel McCoughtry signing with the Las Vegas Aces on the first day of free agency, to Carolyn Swords announcing her retirement and move to the team’s front office, we unpack the movement of signing season in Sin City.

For the first time in three years, the Las Vegas Aces do not have the No. 1 overall pick in the WNBA Draft, and so far in free agency, the team is looking heavy on guards on thin on post players.

Angel McCoughtry, who’d played her entire 10-year career with the Atlanta Dream, kicked off the free agency signing period by inking with the Aces (see more on McCoughtry below).

Swords cuts the strings on her playing career

One person who won’t be suiting up in Aces’ red and black in 2020 is Carolyn Swords, who announced her retirement on Monday, Feb. 24. But choosing to step away from the on-court spotlight does not mean Swords is done with basketball. The 31-year-old journeywoman also announced that she has joined the Aces’ front office staff as a marketing specialist, stating via team press release:

I’m incredibly grateful that my basketball career brought me to Las Vegas, and allowed me to be a part of the launch of the Aces as a player. It’s been an exciting two years, and I’m even more excited about the future as I transition into my new role with the front office.

My internship with the team during the 2018-19 offseason was both a great introduction to the business of basketball and to the Las Vegas community. I’m thrilled that the Aces have afforded me the opportunity to continue to be a part of this world and this city, and I can’t wait to get started working with this amazing staff.

Swords, who averaged 2.6 points and 2.2 rebounds in 8.9 minutes on the court last year, was integral the Aces’ primary community outreach projects off it: the Lace Up Mentorship Program and the Slam Dunk Health Challenge.

In her new role, Swords will “support the implementation of marketing plans for Aces games and other events; work with all aspects of in-game entertainment including the mascot and dance team; and collaborate with media relations, social media, graphic design, corporate partnerships and other internal departments in executing Aces marketing initiatives.”

Perhaps Swords’ prior internship with the Aces led her to a new dream, and to a new dream job. But it is hard to imagine that the level of competition for a roster spot and playing time in the WNBA, and with the Aces, did not factor into her decision-making process. Swords averaged 12 minutes per game for her career and started in 87 of 228 games, with 16 of those starts happening in Las Vegas. With Wilson being the star of the team, Hamby playing like a starter off the bench and Liz Cambage expected to return, Swords’ playing time would be minimal.

Swords’ new job also speaks volumes about the multi-talented nature of so many of the players and their increasing leverage and savvy to pursue careers off the court, whether within the WNBA or outside of it. The new collective bargaining agreement includes programs that are expected to provide broader pathways through which players can gain experience in other roles during the offseason, as preparation for post-playing careers.

As of this reporting, Cambage has not re-signed with the team yet. If it is a priority for head coach and general manager Bill Laimbeer to re-up #LizVegas in 2020, Swords’ retirement could make room to bring Cambage back at whatever salary range the 2018 WNBA scoring leader seeks.

An Angel lands in Sin City

Angel McCoughtry played her entire 10-year career with the Atlanta Dream. After a few Finals appearances in the 2010s failed to produce a WNBA championship — and a retooled roster under 2018 WNBA Coach of the Year Nicki Collen led the Dream to the Eastern Conference semifinals — McCoughtry, Rookie of the Year in 2009, is trying her luck in Las Vegas, with Wilson, Liz Cambage (potentially) and the Aces.

McCoughtry appears stoked for the fresh opportunities Sin City will provide. But with limited activity during free agency, can the Aces help McCoughtry to a championship in 2020 as the window of her playing career nears a close? Equally important, can the Louisville product help the Aces to help her (and, of course, themselves) to the apex of professional women’s basketball?

Viva Las Vegas, baby! I am truly honored for the opportunity to continue my career and
make my return to the WNBA with the Las Vegas Aces. I can’t wait to get to know the fans, community and bond with my new teammates. pic.twitter.com/FTMjTTGH94

Although the WNBA trophy has eluded McCoughtry thus far, she is no stranger to winning it all.

McCoughtry won gold medals at the 2012 London Olympics and the 2016 Rio Olympics with the USA Basketball Women’s National Team. But in the latter part of her career she has suffered serious injuries that have thwarted her championship hopes, including the ACL tear that ended her 2018 season early and caused her to miss all but 0.1 minute of the 2019 season — a courtesy appearance approved by Collen because McCoughtry had not been cleared to play.

Any apprehension about her capabilities were squashed when she returned to basketball recently with Russia’s Dynamo Kursk during the WNBA offseason and turned in a solid performance in an exhibition for the U.S. national team against the Louisville Cardinals, her alma mater, on Feb. 2.

In just under 21 minutes, McCoughtry scored 11 points on 3-of-5 shooting and joined Sylvia Fowles (16 points) and Breanna Stewart (13 points) as the three players to score in double figures for the Team USA. McCoughtry also secured three rebounds, dished two assists and recorded a steal.

Beyond the box score, McCoughtry looked lithe and light on her feet. As a veteran leader, she should be a stabilizing locker room presence for the team’s young stars. Listed as a forward-guard, McCoughtry is an elite playmaker with eagle-eyed court vision. Her ability to read the floor should help the Aces, whether she’s on the court or dropping knowledge from the sidelines. She also could help to bring even more out of Plum, who came alive during the 2019 playoffs with an average of 15.2 points, 7.8 assists and 4.8 rebounds per game.

Does Vegas have a title-ready roster?

The excitement of McCoughtry’s move to Las Vegas waned a bit as her former team, the Dream, executed roster moves that signal team president Chris Sienko’s effort to build a “Dream Team.” Additionally, Skylar Diggins-Smith has taken her talents to the Phoenix Mercury, creating a new “Big Three” with Brittney Griner and Diana Taurasi after DeWanna Bonner sought an exit and signed with the Connecticut Sun.

On their own, the Aces are doing just fine. Compared to the other roster remixes around the league? They still have work to do, and it seems the top priority for Laimbeer would be to return Cambage to the roster. With Wilson alone, the Aces can go far, especially with Plum making such impressive strides in her game — playoffs would be all but certain. With Wilson and Cambage, the Aces can learn from last year’s postseason run and make the leap up to the Finals.