What if Cynthia Cooper had not retired after the 2000 WNBA season? 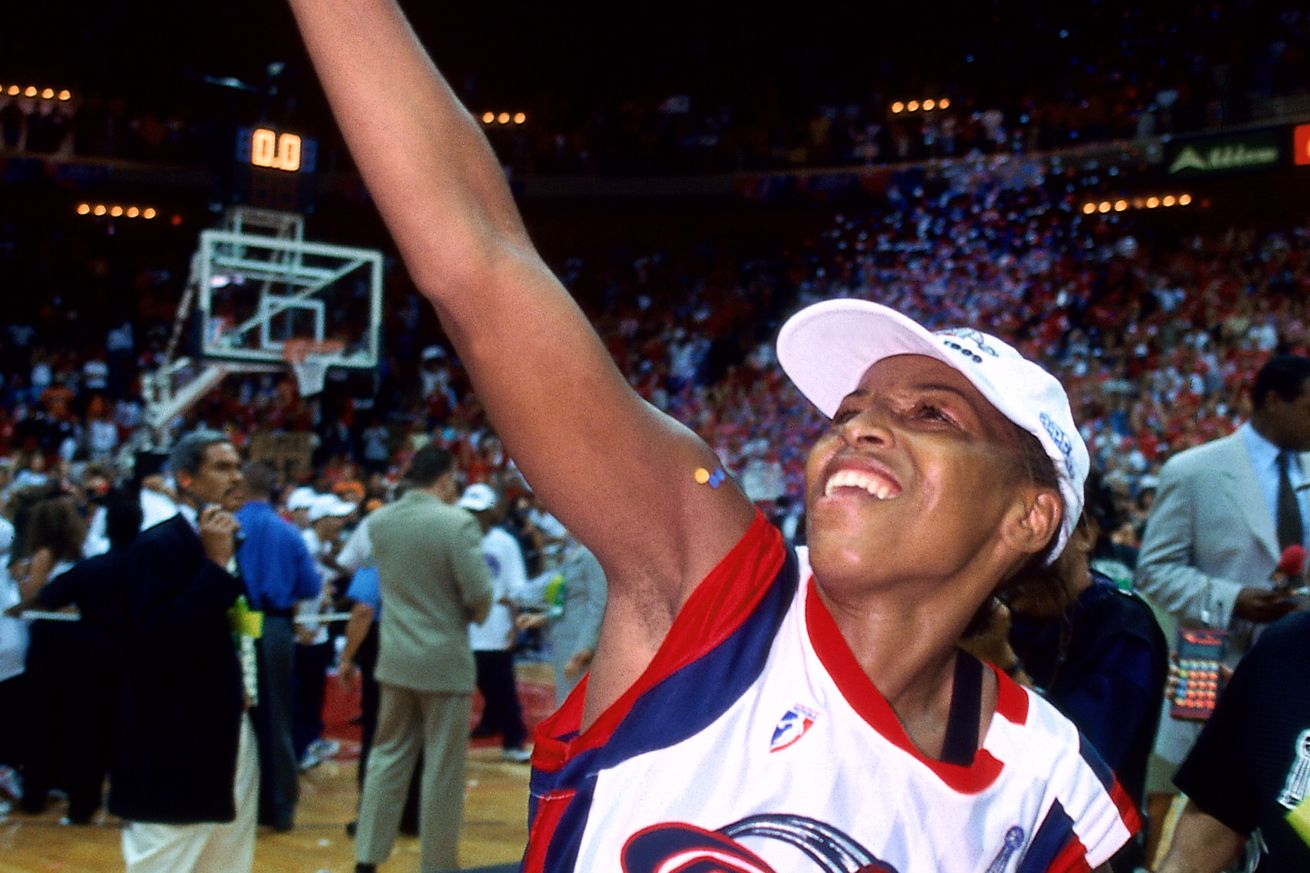 Could the Houston Comets have won a fifth-straight WNBA title if Cynthia Cooper had not retired after the 2000 season? | Photo by Bill Baptist/NBAE via Getty Images

Cynthia Cooper and the Houston Comets took the WNBA by storm, winning the first four championships in league history. Along the way, Cooper claimed two regular-season and four Finals MVP awards. Yet, after winning her fourth title, Cooper opted against pursuing a five-peat. What if she had come back for one more run?

Quit drinking the citrus cooler Gatorade! Not every significant basketball story is about Michael Jordan, the Chicago Bulls and “The Last Dance”!

The championship credentials of Cynthia Cooper’s Houston Comets rival those of Jordan’s Chicago Bulls — Cooper and the Comets won four-consecutive WNBA championships from 1997 to 2000.

If Coop had not retired following the 2000 WNBA season, could there have been an unprecedented fifth-straight championship?

The rapid rise of Cooper and the Comets

When the WNBA opened in 1997, Cynthia Cooper was a roof-raising revelation. She introduced to the WNBA the smooth, slicing and swaggering style she had developed while playing more than a decade in Italy.

In that inaugural season, Cooper scored an efficient 22.2 points per game to lead the Comets to an 18-10 record. In the playoffs, she elevated her scoring to 28 points per game to captain Houston to the WNBA’s first championship. Along the way, she captured both the regular-season and Finals MVP awards.

The following season, Cooper and the Comets confirmed their dynastic destiny.

After missing the majority of the 1997 season due to pregnancy, Sheryl Swoopes in 1998 — who was presented to the world as the Comets’ superstar leading up to the league’s launch — began to flash her expected upside. Tina Thompson, meanwhile, the No. 1 pick in the 1997 WNBA Draft, proved she was an extremely overqualified “third star.”

The Comets cruised to a 27-3 regular-season record that year and Cooper, again, was phenomenal — certifying that she was the league’s most unstoppable scorer on her way to winning her second-straight MVP honor. A regular-season scoring average of 22.7 points was raised to 25.8 points in the playoffs. The Comets, of course, won a second title, with Cooper earning her second-straight Finals MVP award.

While cliché, the Cynthia Cooper-1999 Houston Comets showed that they had the hearts of a champion.

Late in the 1999 season, Kim Perrot, a crucial supporting player during the Comets’ first two championship runs and Cooper’s best friend on the team, lost her fight against lung cancer. For Cooper, this emotional blow followed the passing of her mother, who had died of breast cancer earlier that year.

Cooper’s play, however, did not suffer the consequences of these emotional strains.

Van Chancellor, head coach of the Houston Comets, enthused to Sports Illustrated after the 1999 season, “She is the most focused basketball player I have ever seen. She practices, she plays and she lets nothing bother her. She plays at a top level night in and night out. How she does it physically is a mystery to me.”

The Comets finished the 1999 regular season 26-6 and captured their third-consecutive championship, with Cooper again claiming the Finals MVP trophy.

The “Houston Comets and their sweet star, Cynthia Cooper, made an observer recall the Chicago Bulls of yesteryear … and one Michael Jeffrey Jordan,” the New York Times suggested, also noting “the eerie echoes of Jordan” in Cooper’s clutch scoring.

Reggie Miller, who served as analyst for Lifetime, concurred: “There are so many similarities in style and star quality between the two teams.”

When it came to such comparisons, Cooper demurred. “The bottom line, though, is that both teams have one thing in common,” Cooper told the Times. “We both play with extreme passion.”

However, Cooper insisted that she and the Comets had more title winning to do.

“I’m not going to retire anytime soon, because I feel good and still have the love for the game and the drive and determination to be the best,” she told Sports Illustrated. “As long as I still have the in me, I’ll compete in the WNBA.”

Yet, Cooper’s thinking soon would shift.

By the time of the 2000 WNBA Finals, it was understood that she would retire after the season. It was her “last dance.”

The Comets, of course, were again involved in the fight for the tile, having tallied a 27-5 record. But it was Swoopes, not Cooper, who propelled the Comets’ regular-season success, winning her first MVP award for posting an average of 20.7 points, 6.3 rebounds, 3.8 assists and 2.8 steals per game.

But in the Finals, MVP honors again belonged to Cooper. The now four-time champion and four-time Finals MVP affirmed her intention to retire. She told the Washington Post, “I have had a wonderful career in the WNBA. You couldn’t ask for a better time to go out than on top with the Houston Comets as number one.”

Nevertheless, by calling it quits it seemed like Cooper and the Comets were leaving a fifth title on the table. Why did she depart?

Cracks in the Comets’ championship armor

The Comets were not immune to the diseases that infect dynasties.

Swoopes’s emergence as the Comets’ MVP-winning central star during the 2000 season appeared to have exacerbated the long-simmering uneasiness of the Cooper-Swoopes partnership.

In short, Cooper was supposed to be Jordan; Swoopes just had a son named Jordan.

For Cooper, Swoopes’s rising superstardom complicated her preferred team hierarchy. As a competitor, she, rather understandably, was not ready to relinquish her offensive role.

Early in the 2000 season, Cooper told the Orlando Sentinel, “It hasn’t been an easy transition for me. Normally that happens when a player doesn’t have the ability anymore, but in this case, it’s different. I came back this year, and that was my role.”

Cooper remained resistant to her adapted role. “I think I’m in a supporting role, but I really don’t know what that is yet. If it was my squad, I would not my role,” she shared with USA Today.

So, despite celebrating a historic four-peat, Cooper seemed to have decided that her time had passed, choosing to end her career as dominant, not demoted or diminished. Her frustrations, in combination with the emotional exhaustion that likely lingered due to the deaths of her mother and Perrot, make Cooper’s decision to retire explainable.

She would instead serve as head coach of the Phoenix Mercury, leading the Mercury to a unremarkable 13-19 record for the 2001 season. It thus was easy to envision that Cooper could have made a greater impact on the unfolding of the 2001 WNBA season as a player.

What if she came back?

Before the 2001 season began, Sheryl Swoopes suffered an ACL injury while playing in a pickup basketball game. This unfortunate injury, along with Cooper’s retirement, appeared to affirm that the Houston Comets dynasty was done.

But the Comets were not quite done.

Tina Thompson remained terrific, while Janeth Arcian, a supporting guard during the four title runs, raised her play, turning in an All-Star worthy season. Bolstered by a deep, experienced roster, the Comets earned a 19-13 record, which was good for third in the Western Conference. Houston, however, fell 2-0 to the Los Angeles Sparks, the eventual championship, in the Western Conference Semifinals.

It is imaginable that the return of Cynthia Cooper could have launched the 2001 Comets into title contention.

In contrast to the previous four seasons, defense, more than offense, drove the Comets’ success. Cooper would have enhanced the Houston offense. The absence of Swoopes likely would have allowed her to reassume her role as the crux of the Comets’ offensive attack. A 2001 Comets team organized around the potent pick and roll combination of Cooper-Thompson would have troubled opponents as much as ever.

This Cooper-infused 2001 Comets team likely would not have bested the 28-4 regular-season record of the Sparks, but it is reasonable to suggest that they would have attained a record worthy of the No. 2 seed in the Western Conference, improving upon the 20-12 record of the Sacramento Monarchs. Quite possibly, the Comets would have clearly been the second-best team in the league. In the Eastern Conference, the Cleveland Rockers posted a 22-10 regular-season record, but it was the 18-14 Charlotte Sting who reached the WNBA Finals, falling 2-0 to the Sparks.

So, Cooper and the Comets’ prospects of a five-peat comes down to the 2001 Western Conference Finals? Could they have upset a super-elite LA Sparks team?

Quit drinking the citrus cooler Gatorade! Not every significant basketball story is about Michael Jordan, the Chicago Bulls and “The Last Dance”!

LA was led by a Lisa Leslie on a mission. The Sparks superstar would sweep the MVPs for the 2001, taking the award for the regular season, All-Star game and Finals. All the more, she was surrounded by a fantastic supporting cast, highlighted by fellow starters in Tamecka Dixon, DeLisha Milton, Mwadi Mabika and Ukari Figgs.

A Comets upset would have been a tall task.

Yet, it is difficult to discount the drive and determination the Cooper-led Comets had demonstrated in the playoffs.

While raising the roof was Cooper’s signature celebration, she literally raised the roof in multiple ways throughout her WNBA career. By repeatedly raising the roof on her play, improving and excelling into her mid-30s, she also raised the roof on what was possible for women’s professional basketball more broadly, showing that women players could be unapologetically, enthusiastically obsessed with winning.

Don’t count out Coop! There’s a decent chance she could have had five championship rings.

A post shared by NEO Sportsplant Basketball (@neosportsplantbasketball) on Apr 25, 2019 at 5:45pm PDT