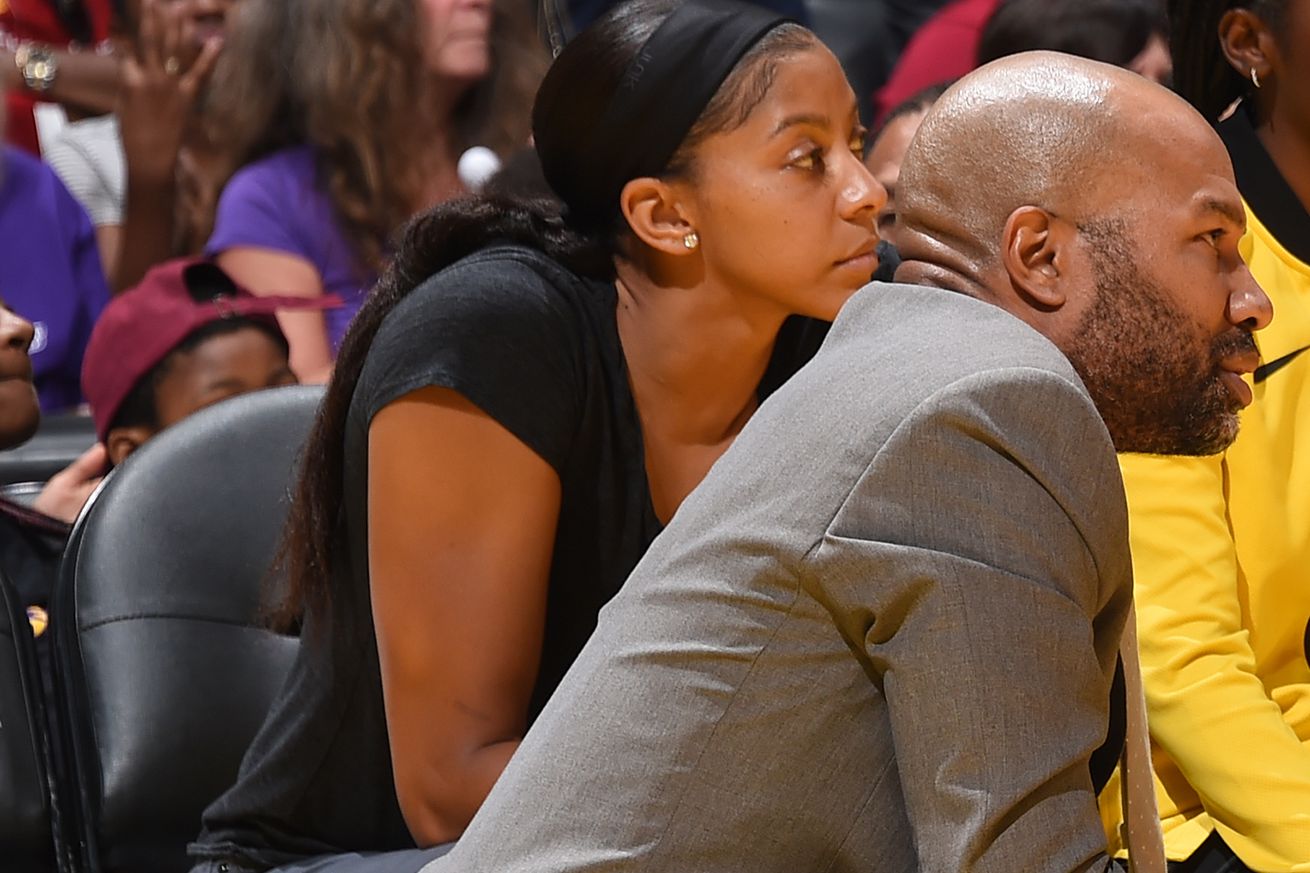 Candace Parker (left) missed some playing time in 2019 due to a hamstring injury. She is seen here watching a game from the sidelines with Los Angeles Sparks head coach Derek Fisher. | Photo by Adam Pantozzi/NBAE via Getty Images

Los Angeles Sparks head coach Derek Fisher benched two-time WNBA MVP Candace Parker in a must-win elimination game against the Connecticut Sun in Game 3 of the 2019 WNBA Semifinals. The Sparks lost the game and were eliminated from the playoffs. Would they have won if Parker hadn’t been benched?

A historically successful offensive juggernaut Washington Mystics and a Connecticut Sun team that started the regular season 9-1 earned the top two seeds for the 2019 WNBA Playoffs. But the third-best team, the Los Angeles Sparks, were loaded with talent and championship pedigree. They met the Sun in the semifinals and knew they had a good chance of winning the series despite lacking home-court advantage.

They certainly didn’t expect to get swept by a Connecticut team that was still up-and-coming.

Parker sat the entire fourth quarter, which the Sun won by three points en route to a 22-point victory, a clean sweep of the Sparks and a berth in the 2019 WNBA Finals.

But the Sparks did get swept. They were blown out in Game 2 in Sun territory, but still had a chance to turn things around at home in Game 3. That is, before head coach Derek Fisher controversially sat one of his star players — Candace Parker, two-time league MVP, 2016 champion and 2016 Finals MVP — for most of the contest, thus, ending any hope L.A. had of coming back into the series.

How Game 3 would have been different

The Sparks would have put up more of a fight against the 2-0 series-leading Sun if Parker had played more than the 11 minutes she was given.

In spite of her age, 33 at the time, and a hamstring injury that bothered her during the regular season, Parker was — and still is — one of the best players in the WNBA. Yet, in Game 3 she saw less playing time than Alexis Jones, an aging Alana Beard who retired after the season, Riquna Williams, Sydney Wiese, Maria Vadeeva and Tierra Ruffin-Pratt.

Had Parker played more minutes, the Sparks likely would have made it a close game — they trailed by just three points after the first quarter. But with Parker sitting during the second quarter and half of the third, Connecticut was able to open a 19-point lead.

Parker sat the entire fourth quarter, which the Sun won by three points en route to a 22-point victory, a clean sweep of the Sparks and a berth in the 2019 WNBA Finals.

It’s impossible to say for sure that the Sparks would have won with Parker in the game, but not only is she a talented offensive player who would have put points on the board, but she is a team leader and the Sparks lost positive vibes with her on the sideline.

The team seemed disjointed and 11 days after the game Ramona Shelburne of ESPN reported that some sources claimed Fisher sat Parker because she went to him with a strategic suggestion before the contest. If so, that would indicate that she had not yet given up on the series and badly wanted to win Game 3.

Fisher had a different story with regards to the benching. Here’s what he had to say after the game:

We’ve had an issue sustaining energy over 40 minutes against [Connecticut] in this series. ... [I was] just trying to get fresh bodies in so we could continue to bang and rebound and run the floor and communicate defensively. It wasn’t in any way to single [Candace] out.

Interview: Candace Parker on being benched

How the rest of the postseason would have been different

Game 4 would have been in L.A. so the Sparks would have had both home-court advantage and momentum in their favor. And if they won Game 4 all the pressure would have been on Connecticut to avoid blowing a 2-0 lead. Anything could have happened in a winner-take-all Game 5 and the Sparks needed a little more Candace Parker to get them to that point.

Connecticut went to the second round of the playoffs in 2018 and had a stellar start to its 2019 season. But they were still a “we’ll believe it when we see it” team when it came to making the Finals over the Sparks. And it goes without saying that we did see it — not only did the Sun sweep L.A., but they also forced a Game 5 and nearly won the Finals against a favored Mystics team. But the question lingers if any of that would have happened if Parker had more to say in the semifinals.

Against the Mystics, the Sparks would have been true underdogs, but Washington played scared at times in their series against the Sun. Connecticut was much looser knowing that they were underdogs and a team that was still getting better. The Mystics were in win-now mode and head coach Mike Thibault had a zero-championships curse hanging over his head to boot. L.A. could have taken advantage of that.

Also, Washington’s 6-foot-5 MVP Elena Delle Donne dealt with back problems throughout the Finals. Delle Donne is known for being able to score from the perimeter, but is strong enough to be effective in the post on offense and defense. The Sparks would have had a definite strength advantage in the post with Parker, Nneka Ogwumike and Chiney Ogwumike playing against a team that was without Delle-Donne at times. They also may have had the veteran wherewithal to make better in-game adjustments defensively on Emma Meesseman, who came off Washington’s bench and won Finals MVP.

The Mystics would have had the best player in the series in Delle Donne and a more prolific-scoring bench, but the Sparks likely would have built on their momentum from the hypothetical end to the semifinals and forced a Game 5.

If the Sparks had won the WNBA Finals, they would still have had stars in Chelsea Gray, Parker and the Ogwumike sisters coming back for the 2020 season. Kristi Toliver still would have returned to L.A. to be in the mix as well — the sharpshooting guard signed with the Sparks this offseason. And with Gray being a budding superstar at the point guard position, L.A. would have been in a position to possibly repeat this year.

As it stands, the Sparks are not aiming for a repeat, but are still vying for the franchise’s fourth championship. If they win it they will move into a tie with the Minnesota Lynx and Houston Comets for the most WNBA championships ever.