What to expect from the WNBA’s old guard in 2020 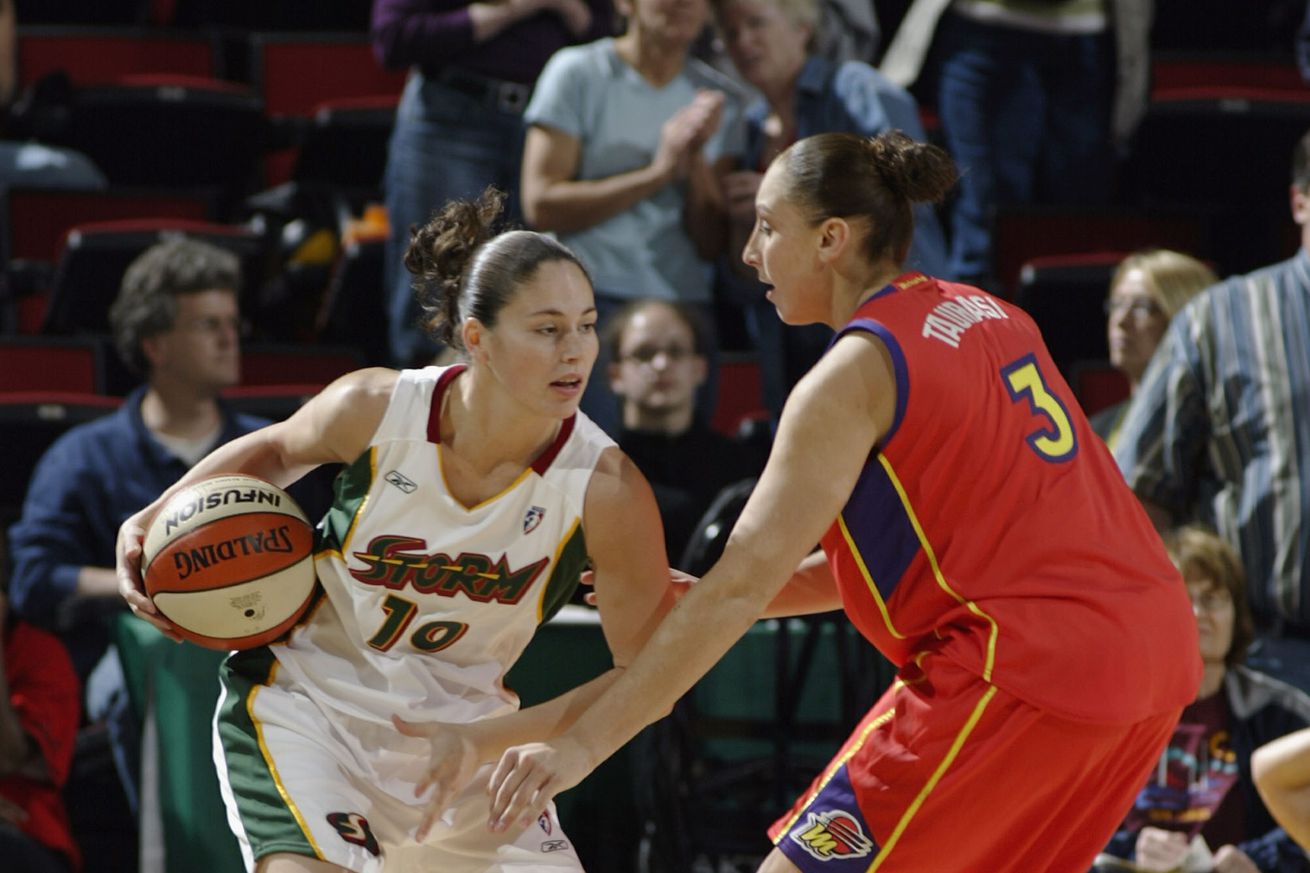 Sue Bird and Diana Taurasi first faced off in the WNBA in 2004. In 2020, they will go at it once again. | Photo by Jeff Reinking/NBAE via Getty Images

Yes, WNBA fans are excited about the arrival of Sabrina Ionescu. However, the league’s veterans are not yet ready to relinquish the reins of the W. Players over age 35, led by Sue Bird and Diana Taurasi, aim to influence the outcome of the 2020 season.

Although a brand new league, the WNBA was populated by veteran players when it launched in 1997.

Epitomizing the veteran character of the original WNBA was Cynthia Cooper. After the Houston Comets’ legend-to-be won the league’s inaugural MVP at age 34, she would capture the award a second time at age 35. Then, she won her fourth-overall and fourth-straight Finals MVP at age 38. And when she retired after the 2000 season, it seemed that she still had more in her tank.

Today’s WNBA is much younger, with the seven rookies on the New York Liberty exemplifying the league’s movement to youth. Yet, Sabrina Ionescu and the youngs do not yet rule (even if they do rule the national television slate).

The five members of the WNBA’s old guard, meaning those who are age 35 or older, will seek to tap into the spirit of Cynthia Cooper and significantly impact the unfolding of the 2020 season.

So what we might see from the WNBA’s ageless stars at IMG Academy? To consider what they could do in 2020, relevant statistics from 10 seasons ago, five(ish) seasons ago and the respective player’s last active season are provided.

The grande dame of the WNBA has expressed her eagerness for the 2020 season, despite the strange, potentially unsettling circumstances.

"There's no playbook for a bubble in a pandemic. I think we're all just trying to make the best of it."@S10Bird pic.twitter.com/ApMiX8lSmm

In a Zoom call, Bird shared that she believed suiting up this season was necessary to continuing her career, explaining:

If I didn’t play basketball this summer, I don’t know, I might have been done. And that’s just a reality,” Bird said. “This isn’t me wanting to retire, this isn’t me wanting to stop playing. The last time I played was like February [2020] with USA Basketball, which was the only a couple games. I didn’t play the WNBA season before that, so it’s really 2018 [was my last time playing in the league]. So now the sudden, if I don’t play this summer, the fall of 2020 goes by ... OK maybe next summer? Who the hell knows with the virus?

Because of Seattle’s depth of talent, Bird does not have to be SUE BIRD! every game. The emergence of Jordin Canada, in particular, means Bird’s playing time can be managed, ensuring she does not overextend the balky left knee that required her to miss the entire 2019 season. Even when she is on the court, she can pick her spots, primarily serving as a ball-moving game manager who strategically scores.

However, if the Storm are to win to the 2020 title, Sue Bird will have to be SUE BIRD!!! at some point, turning back the clock to drill the kind of shots that devastate an opponent. If the she is able to effectively preserve her body over the course of the 22-game regular season, it will not be surprising when the very best Sue Bird steps up in the playoffs.

Diana Taurasi’s 2019 season was a disaster. A struggle to recover from preseason back surgery contributed to nagging hamstring troubles, resulting in Taurasi taking the court for only six games.

Her efforts in these six contests were antithetical to her GOAT-ness. The degree to which her stroke had seemed to abandoned her was shocking, something most women’s basketball fans would like to erase from their memory. Although it could be assumed that her injuries would prevent her off-the-dribble game from working at the accustomed elite level, her inability to serve as an effective floor spacer was concerning. The most prolific 3-point shooter in WNBA history shot a putrid 4.2 percent from deep.

The Phoenix Mercury need Taurasi to return to form if they are to be a threat to take the title in 2020.

While Skylar Diggins-Smith has joined Taurasi and Brittney Griner to form a new “Big Three” in Phoenix, Taurasi still has to be the biggest of the three. Phoenix’s lack of depth, as they only have 10 rostered players in Bradenton, further places pressures on Taurasi to play like the GOAT she is.

Diana Taurasi updates her health and how she is preparing to play! @dianataurasi @phoenixmercury

Taurasi, unsurprisingly, has indicated her self-confidence, telling reporters over Zoom:

I feel great. After two days of training camp to be able to get through everything— that to me is an accomplishment alone. I just gotta keep working at it every single day, getting a little bit better, being a little bit smarter. It’s not going to get any easier, I’m not getting any younger. I just gotta put a little bit more work in in the the weight room and the treatment room and (do) things that my body needs to be on the court.

After playing 14 seasons for the Minnesota Lynx, it is a bit surprising how normal it already seems that Seimone Augustus is a Los Angeles Spark. Recently, head coach Derek Fisher expressed his appreciation for “the real Seimone.”

Of course, the Sparks will need more than her positive sense of humor for their 2020 season to be a success. The trajectory of her career raises some concern.

In her final season in Minnesota, Augustus struggled, playing only 13 minutes per game in the 12 games she managed to play after undergoing arthroscopic knee surgery in late May of 2019. The surgery was her latest effort to manage the pain that has persisted since she tore her ACL in 2009; she also had arthroscopic surgery during the 2015 season.

Following the 2015 season, Augustus’s scoring numbers began decline, primarily due to her reduced to ability to attack the basket and get to the free-throw line. It could be presumed that her latest surgery will further sap her speed and quickness, requiring that she rely more heavily on her midrange to be an effective scorer.

That she shot over 50 percent on 2-point field goals in 2017 and 2018 inspires confidence. However, for the Sparks to be at their best, they will need more dynamic offensive play from Augustus.

Possibly, Fisher and company could tap into her underrated and underutilized distribution skills. In 2017, on a super-talented, title-winning Lynx team, she posted a career-high four assists per game. With LA, she likewise will have talented targets in Candace Parker, Nneka Ogwumike and Chelsea Gray, giving her an opportunity to use her still-tight handle to create advantage scoring chances.

Candice Dupree is an iron woman. For the past 10 seasons, she has played 32 or more games in every season except one. Over the past three seasons, even as she has approached her mid-30s, she has averaged more than 30 minutes per game.

Dupree, once again, will be counted on to provide her steady, consistent presence for a youthful Indiana Fever team.

"I'm pretty excited about where we can get this season."

Although Dupree has managed to remain on the court over the past few seasons, her numbers have slipped, suggesting that she is not quite ageless. Beginning in the 2017 season, Dupree’s field goal percentage dropped below 50-percent. Last season, she only got to the free-throw line 1.6 times per game, a career low.

These dips in offensive efficiency would be concerning if the Fever were dependent on Dupree to drive their offensive. But this shouldn’t be the case. Dupree instead should serve as a supporting piece as new head coach Marianne Stanley orients Indy’s offensive attack around Teaira McCowan, Kelsey Mitchell and Victoria Vivians.

In short, veteran leadership, more than consistent production, should be Dupree’s most important role in 2020, a role for which the mother of twins is more than prepared.

It is no offense to Leilani Mitchell that she is the only player on this list who cannot be described as a “superstar.” Instead, it is a credit to her.

That so many of the WNBA’s oldest players are of superstar level is indicative of the difficulty of maintaining a pro career. It takes a transcendent skill set to survive and thrive in a league with only 144 roster spots. At only 5-feet 5-inches, Mitchell lacks that kind of transcendent ability. But she possesses a special persistence, evidenced by the fact that she has claimed two Most Improved Player awards (2010, 2019).

The Washington Mystics certainly will need Mitchell’s persistent spirit, as the chaos of 2020 has depleted the defending champs.

Last season, Mitchell showed that she could assume a larger offensive role. Playing a career-high 30.3 minutes, she put up a career-high 9.5 field goal attempts, including a career-high 5.4 3-point attempts. This load did not reduce her efficiency, as she posted a true-shooting percentage of 60.3 percent in large part due to her 43-percent 3-point percentage.

While having Mitchell at the helm of the Washington offense is not ideal, it is far, far from a problem. In fact, it will not be surprising if the Mitchell-led Mystics overachieve.