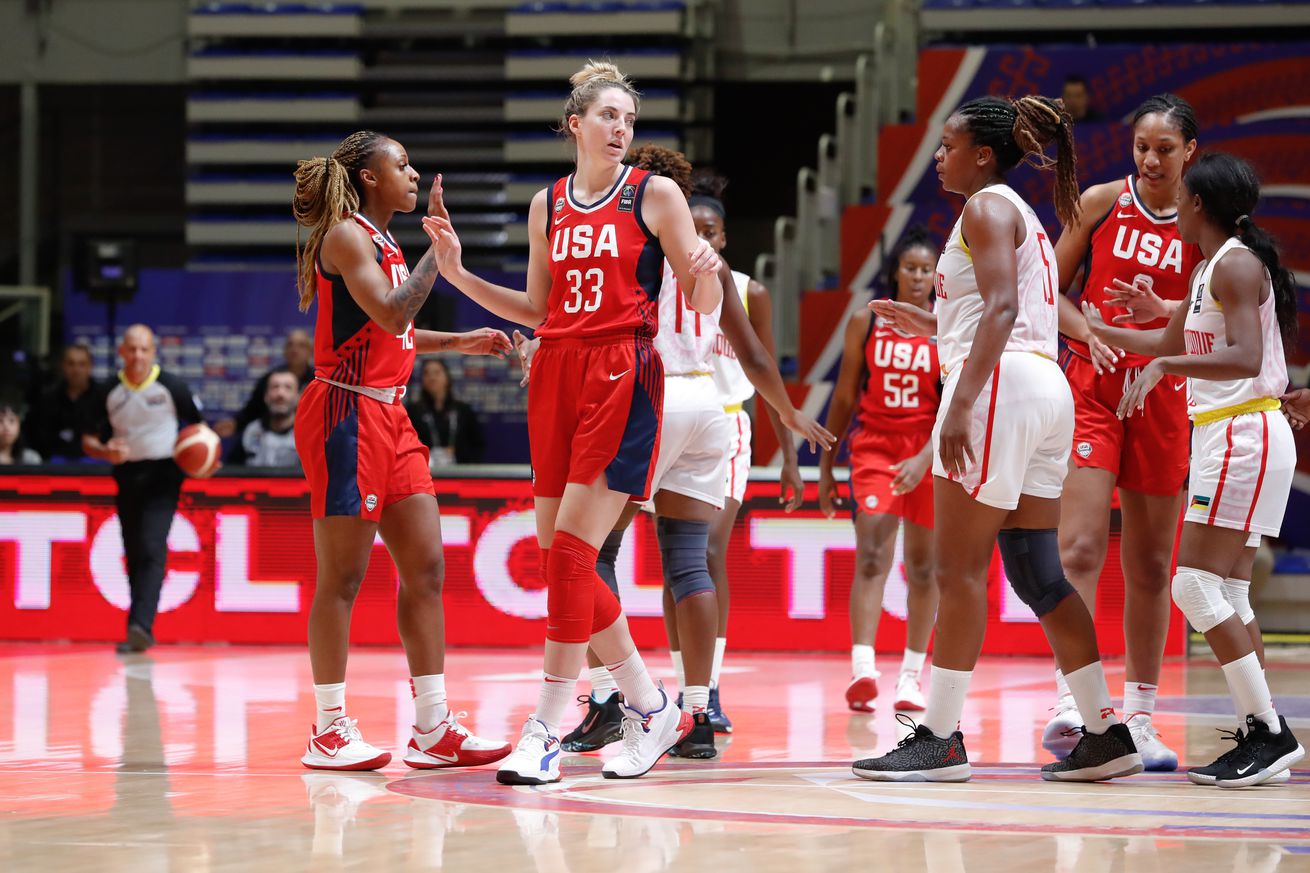 Tiffany Mitchell (left) and Katie Lou Samuelson were replacement players for Team USA’s Belgrade games. Will they make the final cut this summer? | Photo by Catherine Steenkeste/NBAE via Getty Images

The United States National Team returns from Serbia after winning all three of its games in the Olympic qualifying tournament. Some questions regarding Team USA’s roster remain, however, and the team still has work to do before it’s ready for Tokyo.

The United States National Team completed its run at the FIBA Women’s Olympic Qualifying Tournament in Belgrade, going 3-0 in the competition. Team USA opened with an 88-69 victory over host Serbia, ran past Mozambique 124-49 and came from behind to beat Nigeria 76-71.

As the United States automatically qualified for the 2020 Tokyo Olympics when it won the 2018 FIBA Women’s Basketball World Cup, the stakes were significantly lower for the Americans than for other teams competing in Belgrade. With several Team USA mainstays missing — Diana Taurasi and Elena Delle Donne, in particular — the United States took a more developmental approach to the qualifiers, using the games as a way to evaluate future Olympians.

For the most part, that approach was successful. Though Team USA had nothing to lose, it kept its foot on the gas for the majority of the competition’s first two days. Nneka Ogwumike and A’ja Wilson — neither of whom have competed in the Olympics — were named to Belgrade’s All-Star Five, with Ogwumike also earning Group A MVP honors. Ogwumike, in particular, seems to be a lock to make this summer’s final roster.

It’s also a sure bet that one of (and maybe both) Chelsea Gray and Skylar Diggins-Smith makes the Olympic team as point guards. With Lindsay Whalen retired and Sue Bird not far behind, the United States has needed reinforcements at the position for a while now. Team USA chose not to play Bird Saturday against Mozambique, but the offense didn’t skip a beat — Gray racked up 12 assists in 18 minutes of action.

After that, though, things get a bit tight. Katie Lou Samuelson, Tiffany Mitchell and Ariel Atkins were named as replacements for Taurasi and Diamond DeShields, with Samuelson giving Team USA outstanding minutes in the nail-biter against Nigeria. It’s assumed that Taurasi and Delle Donne will be good to go for Tokyo, but DeShields doesn’t have the same tenure they do; could her spot now be up for grabs?

The pool isn’t limited to those names, either. Team USA will be holding a minicamp this coming weekend, with Napheesa Collier, Jordin Canada, Stefanie Dolson, Kayla McBride, Kelsey Plum and Layshia Clarendon joining the team.

While the Belgrade qualifiers provided some valuable experience for a United States roster in flux, there are still plenty of questions to be answered. How many roster spots were earned in Serbia, and how many are still more or less reserved for Olympic veterans? Only time will tell.