Where do the Dream, Wings, Fever and Liberty go from here? 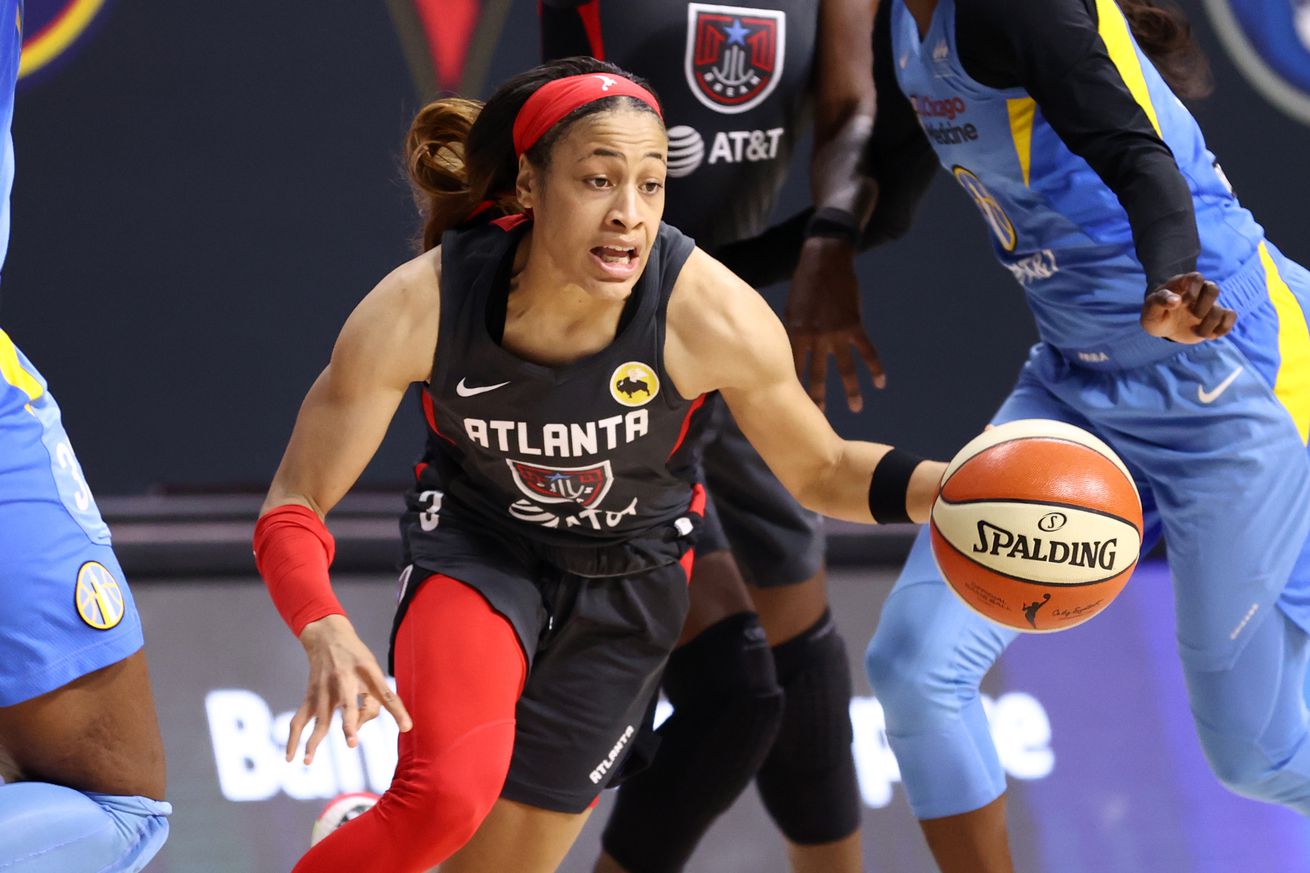 Because of Chennedy Carter, the Atlanta Dream should enter the 2021 season with incredible optimism. | Photo by Ned Dishman/NBAE via Getty Images

The season is over for the Atlanta Dream, the Dallas Wings, the Indiana Fever and the New York Liberty. What lessons will they be taking with them when they depart the IMG Academy “wubble”? And which teams will be best prepared for a better 2021 season?

Due to illness, injury and other unexpected absences, each of these four teams can lament what could have been but their efforts do not have to be for naught. What did Atlanta, Dallas, Indiana and New York learn about their squads during their “wubble” stay? More importantly, can these teams use this information to find more success in the (hopefully normal) 2021 season?

In spite of their record, the Dream should exit IMG Academy with a sense of optimism.

Foremost, Chennedy Carter is the real deal. While not always “unguardable,” as claimed by head coach Nicki Collen, Carter proved she can be the engine of a successful offense. In the games in which she played more than three minutes, the Dream were 7-7, a winning rate more than good enough for a playoff berth.

More critically, Carter and the Dream’s starriest 2020 offseason addition — Courtney Williams — were becoming an explosive, though undersized, guard duo. Luckily, the Dream also “discovered” Betnijah Laney, the former defensive specialist who blossomed as a versatile offensive weapon. Her usage and efficiency skyrocketed in 2020, a rare combination that allowed her to make a historically impressive leap at age 27.

Re-signing Laney should be the No. 1 priority for Atlanta so that the franchise can orient its offense around the Carter-Williams-Laney trio.

Yet, this raises a somewhat complicated question: How will the Dream’s former top offensive option — Tiffany Hayes — mesh with this version of the Dream in her presumed 2021 return? Hayes’ elite isolation game seems an odd fit for this mix. Might Atlanta consider moving Hayes to add a big with a higher offensive upside? Because of COVID-19 diagnoses, the Dream were unable to see Glory Johnson and Kalani Brown at their best. As such, it remains unclear if the Dream have enough frontcourt pop to be a top team. Free-agent-to-be Elizabeth Williams and Monique Billings, while bringing defensive integrity and energy, respectively, are not consistent offensive threats.

Atlanta should welcome the returns of Renee Montgomery and Maite Cazorla, as the 2020 season showed the Dream desperately need a backup point guard. Blake Dietrick did her best, but her role is as a scrappy 3-point shooter — not a playmaker — as evidenced by her nearly 45 percent 3-point performance.

Even as 2020 has taught us that nothing is assured, the Dream should feel confident about their 2021 playoff potential.

Head coach Brian Agler treated the wubble as a laboratory and experimented with the variety of lineup possibilities his stacked-but-youthful squad presented. Unfortunately, he never found a totally successful solution.

Arike Ogunbowale confirmed that she can be an offensive force unto herself, leading the league in scoring during her sophomore season and earning the 2020 Peak Performer Award as a result.

Yet, figuring out how to take advantage of Ogunbowale’s supreme scoring ability while also amplifying the talents of the rest of the roster proved a tough equation to balance. In particular, rookie Satou Sabally showed she has to be highly involved in any system the Wings run. A few nagging injuries limited the No. 2 pick but she still provided a preview of her unicorn-like potential. Allisha Gray also deserves to be empowered as an offensive option.

While it would have been encouraging to see Bella Alarie and Ty Harris get more court time, the respective No. 5 and No. 6 respective picks in the 2020 draft flashed their pro potential. The best version of Alarie can protect the paint on one end and stretch the floor on the other. Harris can be a smart, sharp-shooting floor general but it is left to be seen if her more measured offensive instincts can be maximized alongside the free-flowing, ball-dominant Ogunbowale.

Regardless, the young Wings will be expected to coalesce into unquestioned playoff contenders in 2021.

At the time, the Fever’s selections of Teaira McCowan and Lauren Cox in the 2019 and 2020 drafts, respectively, were cause for praise. Yet, it is tempting to imagine an alternative version of the Fever, one where Napheesa Collier and Chennedy Carter are wearing gold and navy. And, the Fever easily could have had Betnijah Laney flying around alongside Kelsey Mitchell.

While this second guessing is mostly unfair, this scenario serves to highlight Indiana’s lack of clear direction. In spite of Tamika Catchings’ elevation as vice president of basketball operations and the arrival of Marianne Stanley as head coach, the Fever underwhelmed in 2020, not only showing little improvement but also failing to establish a coherent identity.

Indiana was hit particularly hard by illness and injury. COVID-related concerns curtailed Lauren Cox’s rookie season and prevented Erica Wheeler’s participation before a re-injury short-circuited Victoria Vivians’ comeback season. Even after these adverse conditions became baked in, the Fever did not improve over the course of the 2020 season. They failed to build on their fiery win over the Seattle Storm early in the season and instead fell into an eight-game losing streak.

It is important to recognize that all players develop at different rates bit Teaira McCowan’s sophomore season was a disappointment. Rookie Julie Allemand was a pleasant surprise but it is worth asking if she has enough juice to be a high-level starting point guard. Kelsey Mitchell, however, certainly has the juice needed to be one the WNBA’s elite but the Fever brass seem resistant to empowering her as such. Why not give her the keys to the offense as the Wings have done with Arike Ogunbowale? Maximizing Mitchell is the Fever’s clearest path to becoming a team with legitimate playoff potential.

It also will be interesting to see whether Catchings chooses to retain unrestricted free agents Candice Dupree and Natalie Achonwa, who provide veteran leadership but not the kind of upside in which Indy should invest.

At the most basic level, this is all that matters for the Liberty as they look forward to their (hopeful) debut in Brooklyn in 2021. During her too-short rookie season, Ionescu showed that she will be able to manipulate and master the WNBA court just as she did in college. New York also will welcome back Asia Durr in 2021, whose rough rookie season in 2019 doesn’t align with what she contributed in the NCAA and what she is capable doing at the pro level.

But did the organization use its post-Ionescu time at IMG Academy to ensure they will be ready to surround the star with the best Liberty team possible? More than their dismal record, New York’s leadership approach in 2020 raises some questions and concerns.

With or without Ionescu, 2020 was slated to be a “rebuilding” season, a term that suggests prioritizing the development of young players rather than wins or losses. However, head coach Walt Hopkins gave his team’s four veterans consistent playing time but gave inconsistent time to his six remaining rookies. Of New York’s rookies, only Jazmine Jones and Leonna Odom averaged more than 20 minutes per game. Both flashed professional promise, with Jones indicating she can be a high-level, off-the-bench bucket-getter and Odom intriguing with her twitchy, energetic athleticism.

In fewer than 15 minutes per game, Kylee Shook also impressed, suggesting she should have received more opportunity to refine her picks, pops and rolls. Even accounting for possible COVID-related limitations, the lack of playing time for No. 9 pick Megan Walker was puzzling. It would seem wise to have allowed Walker to get comfortable as a 3-point shooter at the WNBA level since she will be expected to hit such shots when flanking Ionescu. In their uneven minutes, Jocelyn Willoughby and sophomore Paris Kea also showed solid 3-point shooting abilities, among other WNBA-applicable skills.

Nonetheless, these slices of promise could have been more than slices if Hopkins and the New York brass had fully embraced their rebuild.