Who might join Fowles, Taurasi and Bird as an active WNBA all-time leader? 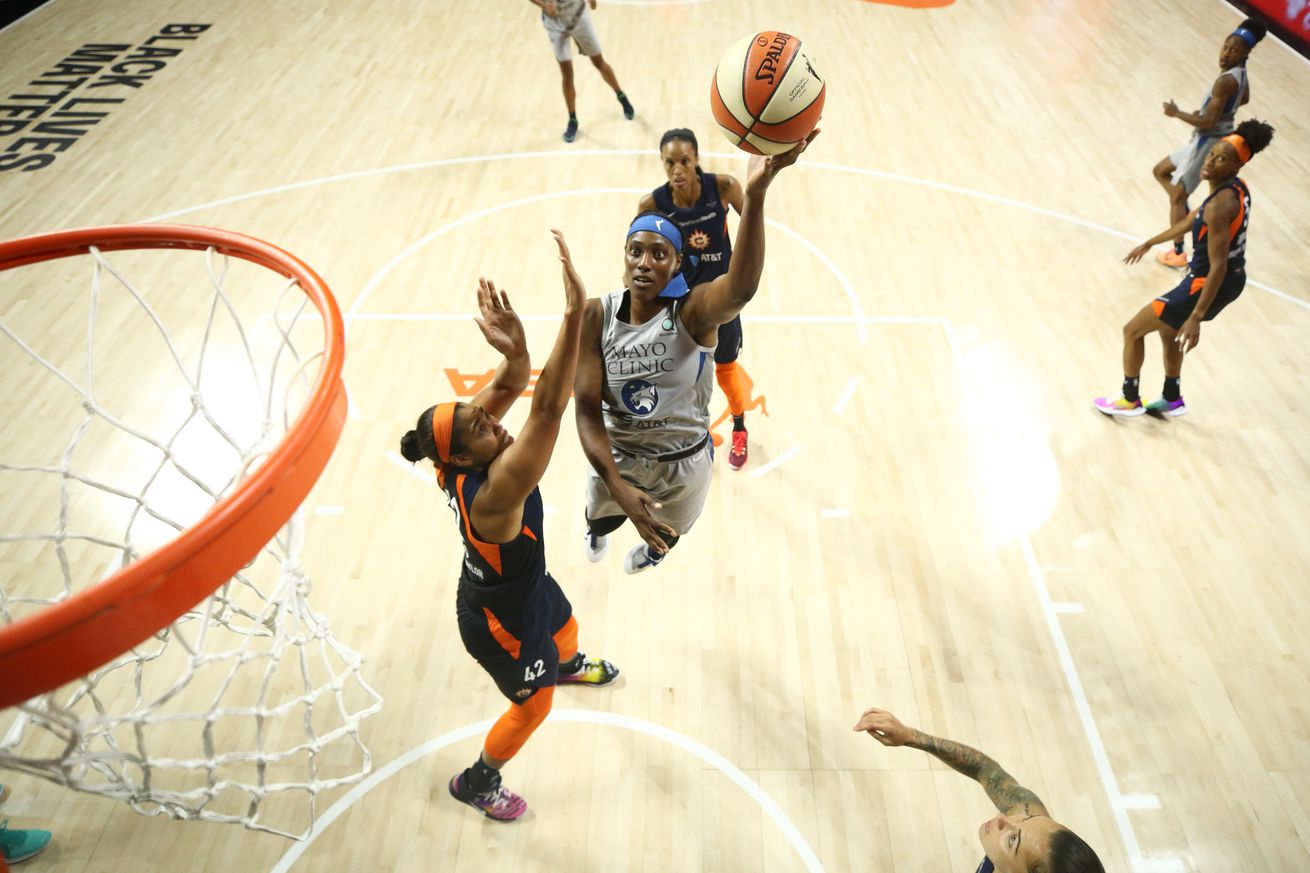 Sylvia Fowles, Queen of the Rebound (with ball), soars over the Connecticut Sun on Aug. 1, 2020. | Photo by Stephen Gosling/NBAE via Getty Images

Can Brittney Griner and Sue Bird reach the top in blocks and steals, respectively? If so, they’d join Diana Taurasi (points) and Sylvia Fowles, who claimed rebounding title on July 18. Bird already leads the league in assists.

When Sylvia Fowles grabbed her 3,357th rebound late into the first half of her Minnesota Lynx’s loss to the Seattle Storm on July 28, she became the WNBA’s all-time leader in total rebounds and joined an elite trio of active players holding league all-time records.

Fowles’ friends at the top

Diana Taurasi became the all-time leader in points scored in July 2017. Two months later, that same year, Sue Bird — a teammate of Taurasi at UConn and close friend — claimed the top spot as the league’s all-time leaders in assists.

Taurasi sits comfortably at the top with 8,637 career points, with retired players Tina Thompson (7,488) and Tamika Catchings (7,380) rounding out the top three. The only active player behind Taurasi, however, is Candice Dupree (6,520), who sits fifth behind recently retired Cappie Pondexter (6,811). Thus, Taurasi scoring record is secure for the foreseeable future.

Bird has a healthy hold on the top spot for assists, with 2,841, with Ticha Penicheiro (2,599) and Lindsey Whalen (2,348) behind her. But two active players are present in the top 10: Taurasi (1,891) and Courtney Vandersloot (1,718). Now at age 38 and having missed most of the 2019 season with a back injury, Taurasi — who also has remarked on the increased difficulty of staying game-ready as she ages — has no viable chance to threaten Bird’s record. But could 31-year-old Vandersloot? Bird is still playing at an elite level at age 39. Thus, if Vandersloot plays for several more seasons and Bird retires within the next few years, the Sky floor general could catch and surpass Bird.

Fowles’ balanced attack of the boards

For Fowles, it was a case of keeping record in the Lynx family. After grabbing her 3,357th, it was former Lynx star and current assistant coach Rebekkah Brunson who presented Fowles with the game ball. Now at 3,381 rebounds, Fowles sits comfortably above the three retired players behind her — Brunson (3,356), Catchings (3,316) and Lisa Leslie (3,307). Holding the fifth spot, however, is veteran Tina Charles (3,133), who will grab no rebounds in 2020 because she has been medically excused from the season, and the top 10 includes two more veterans — Dupree (2,967) and Candace Parker (2,727).

She is fourth all-time for offensive rebounds (986) behind Brunson (1,166), Taj McWilliams-Franklin (1,062) and Yolanda Griffith (1,049). Depending on how much longer she plays, the record for offense rebounding is within Fowles’ reach, though unlikely, because she has fashioned a game of balance on both sides of the ball, in every facet of the game.

Third on the all-time list for defensive rebounds with 2,395, Fowles could, at any time during the early juncture of the 2020 season surpass Catchings’ 2,399 defensive boards. Fowles needs 31 defensive rebounds to pass Leslie as the all-time leader, but things are not a lock. Dupree is right behind her with 2,238, followed by Charles (2,225) and Parker (2,215) as the only active players holding spots in the top 10.

Any chance to expand the all-time leader club with more active players?

No chance of snagging the No. 1 spot for steals, says Catchings, whose 1,074 career pockets picked are well above Penicheiro’s 764, Alana Beard’s 710, Sheryl Swoopes’ 657 and Sue Bird’s 653. Angel McCoughtry (601) joins Bird as the only other active player in the all-time top 10 for steals.

Brittney Griner, meanwhile, is the only active player with a chance at the blocking title, and to reach it won’t be easy. Griner, who turns 30 in October, is third all-time, with 643 rejections — an impressive achievement for someone with seven seasons under their belt and years left to play. But she needs 180 blocks to pass Leslie, who holds second place with 822 career blocks, and 235 to pass top-blocker Margo Dydek’s 877.

Can Griner get it done?

Her blocking average has been on a slide since her four blocks per game 2015. After averaging just two rejections per game in 2019, she has fallen below two blocks per game this year. A concerted effort, with Defensive Player of the Year goals, would get Griner to the top quickly. Otherwise, the 6-foot-9 center is likely to cruise to the top by the time she hangs up her basketball shoes.