Why Natasha Cloud is voting for Joe Biden 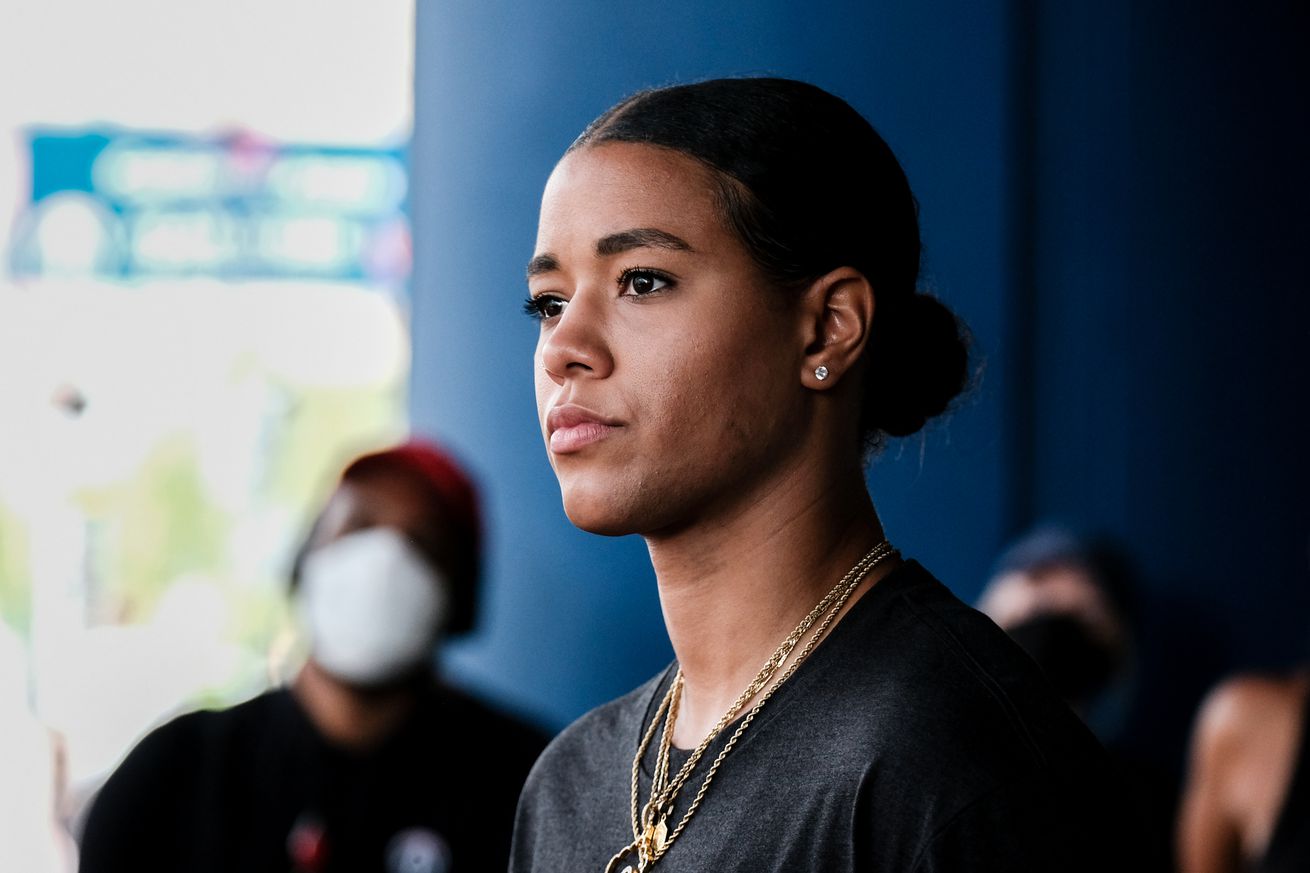 Natasha Cloud: ‘We need to vote like our lives depend on it.’ | Photo by Michael A. McCoy/Getty Images

From the continued fight for justice for Breonna Taylor to why she is voting for Joe Biden, Washington Mystics star Natasha Cloud discusses activism and politics with Tamryn Spruill on ‘The Hard Screen,’ a women’s hoops podcast.

Those in the bubble said (and wore) the names of Breonna Taylor and the other Black women killed by police. And they paired this symbolic activism with substantive advocacy. They endorsed Georgia Senate candidate Reverend Raphael Warnock and promoted voting and other forms of political engagement.

Outside the bubble, WNBA players like the Washington Mystics’ Natasha Cloud also were hard at work on social justice reform.

One of this generation’s most prescient and pressing athlete-activists, Cloud has deeply engaged with a variety of social justice causes, from unapologetically calling out Kentucky Attorney General Daniel Cameron for his handling of the Breonna Taylor case and continuing her advocacy against gun violence to encouraging all who are outraged by these injustices, especially Black and brown people, to exercise their right to vote.

On the most recent episode of the The Hard Screen, a women’s hoops podcast with Tamryn Spruill, Cloud underscored the urgency of the 2020 U.S. presidential election for Black and brown people, LGBTQ+ people and everyone who wants to see a more humanistic, empathetic society.

Here’s a highlight of what Natasha Cloud had to say:

On why she is voting for Joe Biden

“When you’re talking about getting back to being empathetic and sympathetic and having a human being run our country, it is Biden. It is Biden through and through.”

On the need for Black and brown people to vote

“We need to vote like our lives depend on it. And when I say that I’m talking primarily to the Black and brown community. We need to show up. There’s no excuse for us not showing up. … We are the deciding people on who runs our country.”

Please. To every sane person in America. PLEASE. VOTE. Our lives depend on it…..literally.

“Our first initiative was to get Capital One Arena, which is where the Wizards play, available as a polling location. We did that. … (Later), I found out that Entertainment and Sports Arena (where the Mystics play) had said no to being a polling location. … I immediately took to social media to make sure all my followers knew what was going on but to also put pressure on the CEO of Entertainment and Sports Arena. Cause when we moved into Southeast D.C. we said we would be part of the solution. So for me, it was holding them accountable.”

ICYMI: @T_Cloud4 helped to ensure the Entertainment and Sports Arena in Ward 8, home of the @WashMystics, would be used as a super vote center for early voting and Election Day in D.C. #MakeWayMakeChange pic.twitter.com/huAg49Y0xv

On priorities that should not be partisan

“I am a Democrat because I grew up in a middle-class family but if there was a better-suited Republican to run, whether it was state, locally or federally, I would vote Republican. … We’re so stuck in ‘I’m a Democrat. I’m a Republican.’ I don’t give a shit about that. At the end of the day … Are you a good human being?”

On the frustrations and ramifications of misinformation

“I have Trump supporters in my family and it has been the hardest thing for me to decipher through, to emotionally get through. … So for me, it’s extremely frustrating that people don’t educate themselves on the facts. That they just want to sit and listen to whatever designated news station, media outlet that they prefer. … There are a lot of ignorant people out there that don’t understand why we’re continuing to fight for LGBTQ+ rights while we’re fighting for Black Lives Matter. They don’t understand to the depths that this effects us and our everyday life.”

Forreal it takes a simple google search and a middle school level of reading and comprehension to decipher through trumps con man lies.

But a lot of y’all prove over and over again that it’s not about proof…it’s about his divisiveness and hatred that makes you support him.

On the dangers a second Trump term poses to LGBTQ+ people

“Not only am I Black, but I’m also bisexual. I’m also engaged to a female. Now we have to rush our marriage out of fear that if Trump gets reelected and because Republicans hold the House (editorial note: Republicans currently hold the Senate), we might lose the validity of our marriage. We might lose our ownership on our home. And having those conversations with my family members who are Trump supporters — they have no idea that this is going on. They have no idea that he would try to pass laws and bills that would keep us from adopting if, God forbid, neither of us could have children.”