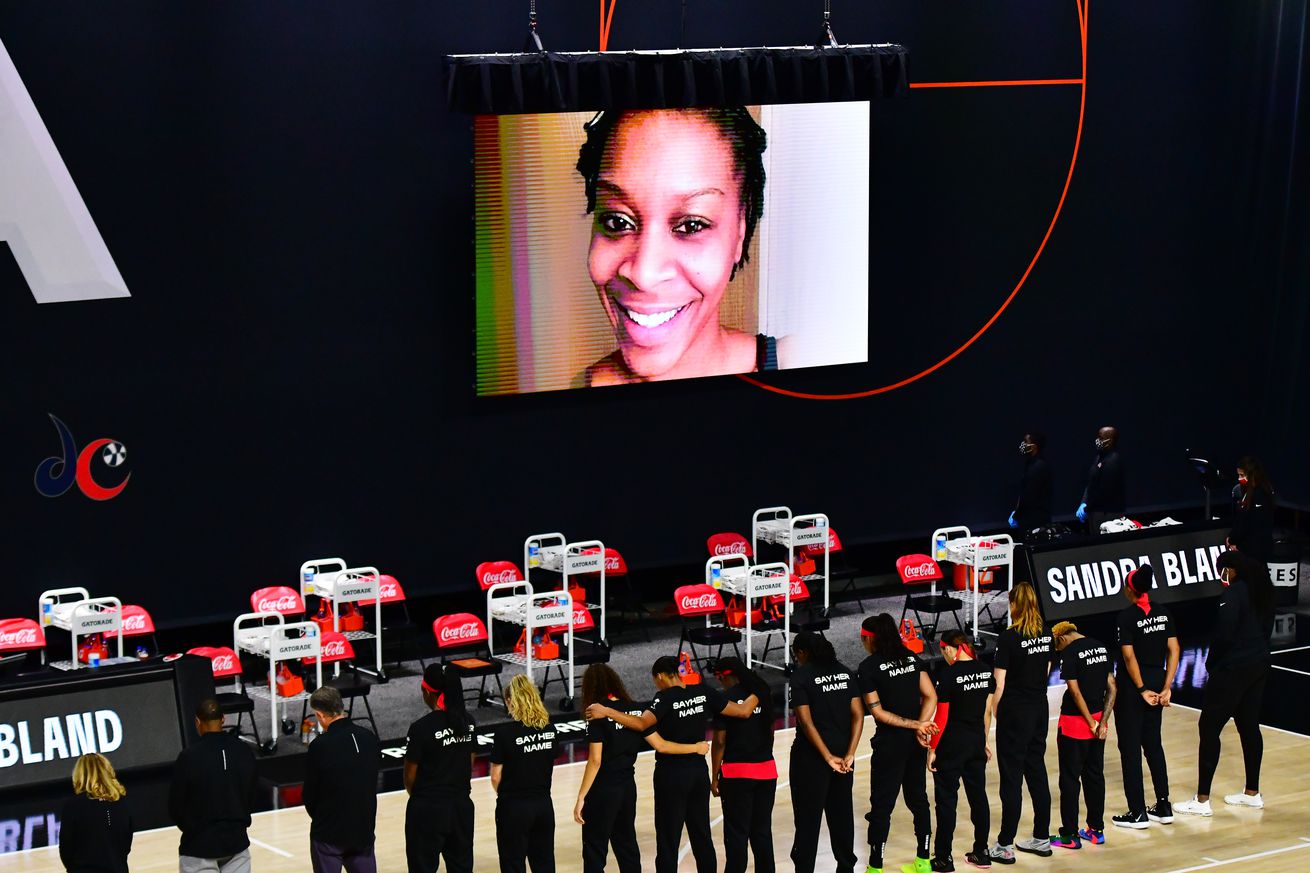 The Atlanta Dream honor the memory of Sandra Bland before a game against the Indiana Fever on August 2, 2020 at IMG Academy in Bradenton, Florida. | Photo by Julio Aguilar/Getty Images

“Make no mistake about it, casting our vote is the ultimate way we go high when they go low.” —Michelle Obama

Those words from the former (and, to many, the forever) First Lady of the United States encapsulate the statement made by members of the Atlanta Dream and players across the WNBA. Before Tuesday evening’s games, the Dream and other teams in action donned black shirts that read “Vote Warnock.”

“Make no mistake about it, casting our vote is the ultimate way we go high when they go low.” -Michelle Obama, Our Forever First Lady #BetOnWomen #TheNineteenthAmendment #VotingRightsAct

Rev. Raphael Warnock, a Democrat, is challenging Dream co-owner Kelly Loeffler, a Republican, for the U.S. Senate to which she was appointed in October 2019.

‘Not a political statement (but) a statement of humanity’

In a letter to WNBA commissioner Cathy Engelbert, Loeffler expressed disagreement with the social justice initiatives around which the league has organized its unique 2020 season. Stating particular opposition to WNBA players’ support for the Black Lives Matter movement, Loeffler employed a grab bag of right-wing talking points, mischaracterizing and politicizing players’ commitment to human rights issues.

Why do you own a WNBA team? My personal opinion is that she has to play the political game. Okay, if you want to play a political game, do that, but don’t include us in it. Leave us out of it! We’re talking about social injustice and things. That’s not politics. That’s human rights. So, I don’t even know why she’s mixing the two.

Like McCoughtry, players around the league not only were unamused, but outraged as well, calling for Loeffler to be removed from her ownership position. In response, commissioner Engelbert stated, “We’re not going to force her to sell her ownership,” additionally asserting that Loeffler “has not served as a governor since she became a senator.”

‘Casting our vote is the ultimate way we go high’

In her podcast, Spruill also explains how Loeffler’s ideas are antithetical to the founding vision of the Atlanta Dream which, through its name and original logo, explicitly invoked the memory and mission of the Rev. Dr. Martin Luther King, Jr.

As Spruill further notes, the Dream’s recent rebranding effort likewise taps into the city’s status as a cradle of the modern Civil Rights Movement, a place of social progress and a bastion of modern Black culture.

At the convergence of grit and grace, of perseverance and new beginnings.

Yet, Loeffler chose to “go low” — disrespecting the vision of the Dream, and how WNBA players are seeking to fulfill this vision through their season focused on social justice — in a naked attempt to activate the racial anxieties of white voters and loosen the pockets of GOP donors.

In response, WNBA players are going “high,” exercising their right to participate in the political process (a right, among many, that Dr. King fought for) by endorsing Rev. Raphael Warnock and encouraging Georgians, as well as all Americans, to vote in November for candidates that support the equitable, inclusive values of the WNBA.

I am proud of these players. Thank you for connecting the dots between social justice & voting. @ReverendWarnock is one of the bright stars vying to for U.S. Senate in Georgia – he’s got this. https://t.co/w6nAFG0p6K

As hinted at by ESPN’s Holly Rowe, Seattle Storm legend Sue Bird spearheaded the t-shirt idea. In a sideline interview with Rowe, Bird deflected credit and emphasized the importance for voting for candidates who support social justice.

“I’m not some political strategist, but what I do know is that voting is important,” Bird said in a subsequent interview with ESPN’s Ramona Shelburne. “And I think our league has always encouraged people to use their voices and to get out and vote.”

Also speaking with ESPN, Elizabeth Williams, captain of the Dream and a member of the WNBPA’s executive committee, expressed the attitude of her team and their embrace of Bird’s idea:

I think when all this stuff started happening with her, we didn’t want to feel like we were pawns. We can only control so much about what the league does [in regard to Loeffler], and so for us, we wanted it to be bigger than that. That’s kind of been the theme of this season. So we wanted to make sure we could still keep the focus on our social justice movement, and funny enough, Rev. Warnock is somebody who supports everything that we support and just happens to be running in that seat. So it just worked out really well.

“For effective change to happen, there has to be policy changes,” Williams added. “And so if we’re going to sit here and talk about wanting justice reform, part of that is making sure that we have officials in office that understand that.”

WNBPA first vice president Layshia Clarendon, a former member of the Dream, further articulated why WNBA players have decided to endorse Rev. Warnock. “We want people in office who support the same values and morals as we do,” she told ESPN. “Rev. Warnock is pro-criminal justice reform, for LGBT+ rights, and pro-choice/reproductive rights. Those are the kind of people we want representing us, because that’s what our league stands for.”

If you’ve been following along the W this season you know that a certain owner of a certain team has come out against our social justice platform. You can’t tell us to stick to sports while a sitting senator owns one of our teams! This is our response. It’s one thing to sell a team, it’s another thing to flip a senate senate seat. Rev Warnock is the democratic candidate running for senate in Georgia. Myself and multiple players around the league have gotten on zoom calls with @raphaelwarnock and have loved everything he stands for and the platform he’s running on. Rev Warnock’s history of fighting for the oppressed speaks for itself. He’s pro reproductive rights, for criminal justice reform, and pro LGBTQ+ rights. Please help us spread the word to keep raising his profile to the national level so we can take our damn government back! If you live in Georgia, you can actually vote by mail! Please visit Stacy Abrams @fairfightaction for more information on how to register and get your absentee ballot!#VoteWarnock #FlipTheSenate #ByeFelicia