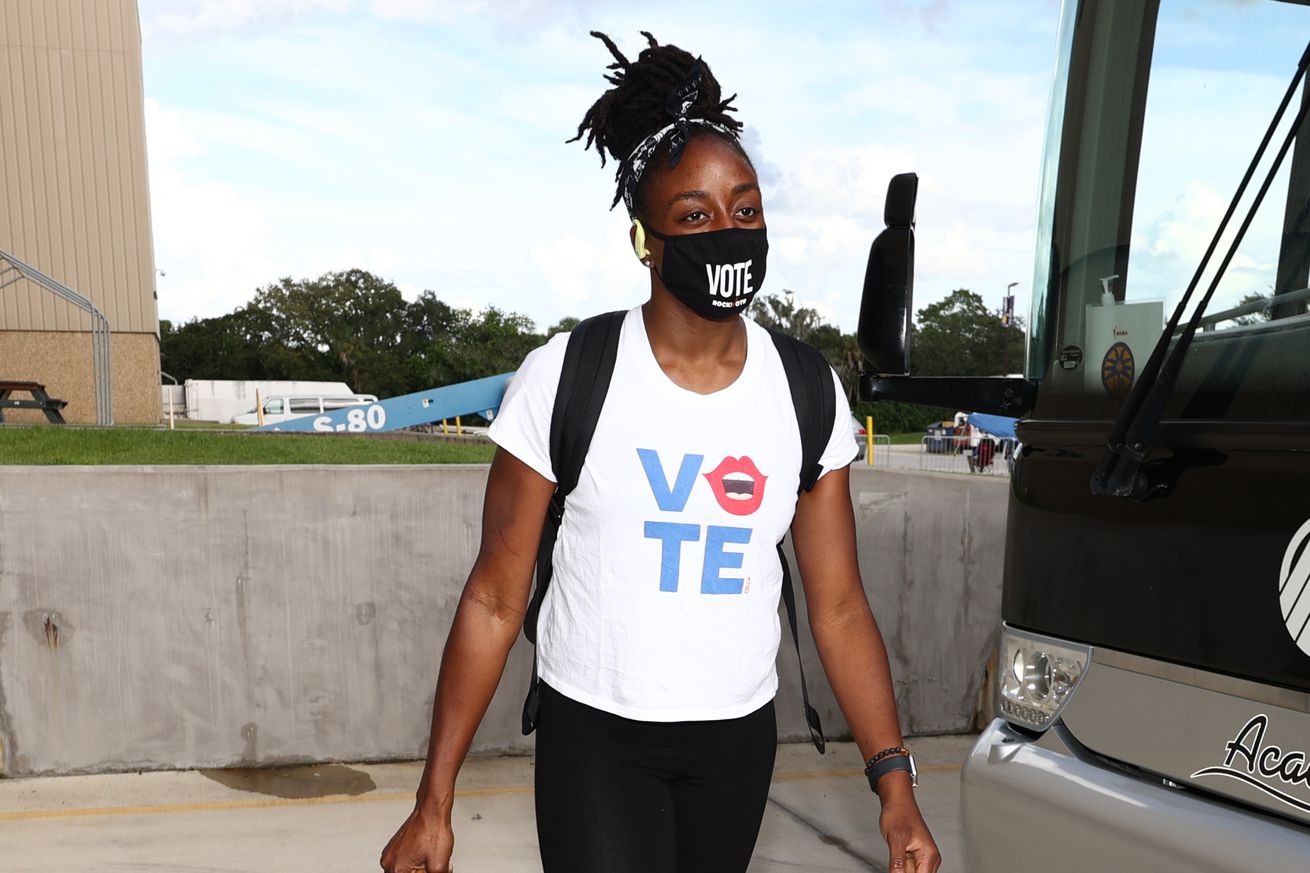 As Election Day 2020 arrives, here’s a reminder of why — and how — WNBA players are getting out the vote.

When Atlanta Dream co-owner and Georgia Republican Senate candidate Kelly Loeffler expressed her opposition to the WNBA’s commitment to social justice, WNBA players offered their response: an endorsement of one of her Democratic opponents, Reverend Raphael Warnock.

WNBA players did not intended to play the political game, but Loeffler’s criticisms dragged them onto the court.

Who is anyone to tell us as female athletes to just ‘stick to sports’? I mean, we’ve actually tried to do that; nobody would let us. So here we are, standing up for ourselves, which is something that is very natural for us at this point. And now we’re the one’s bringing the politics in?

On the most recent episode of the Just Women’s Sports podcast, WNBPA president Nneka Ogwumike echoed Bird’s ideas in her conversation with host Kelley O’Hara:

Naturally we are, unfortunately and inherently, political. We don’t choose to be — it just is. … That authenticity drives our action. And so we just naturally do and we naturally represent and speak out and effect change and hold people accountable and educate ourselves and our communities.

WNBA players would not “shut up and dribble.” Instead, they picked up the ball and scored points for causes and candidates they believe in. And by sharing voting messages and organizing voting initiatives, they are trying to run up the score and encourage fans and followers to use their voices to support people and policies that will help make possible a more equitable world.

Here’s a snapshot of how and why WNBA players have gotten out the vote this election season:

While Natasha Cloud has announced her support for Joe Biden, she also has articulated the importance of state and local races, especially when it comes to achieving justice for Black women killed by police.

Cloud has emphasized that the Attorney General of Kentucky is an elected office. This means that the people of Kentucky have power over Daniel Cameron, the Attorney General who has resisted charging the police officers who killed Breonna Taylor. Although Cameron was elected in 2019 and is not up for re-election until 2023, attorneys general and prosecutors in other states and localities are on the ballot. Cloud has underscored the importance of educating oneself on the positions of candidates for such offices.

More Than a Vote

Athletes across sports, including Cloud and her softball-playing fiancée Aleshia Ocasio, are part of More Than a Vote, the organization started this summer by LeBron James with the primary goal of protecting Black Americans’ right to vote. Other WNBA players, past and present, who are on the More Than a Vote team are: A’ja Wilson, Arike Ogunbowale, Brittney Griner, Chiney Ogwumike, Elizabeth Williams, Kristi Toliver, Lisa Leslie, Renee Montgomery and Skylar Diggins-Smith.

On why she became a founding member of the organization, Diggins-Smith told the New York Times, “I’m sick of seeing unarmed black men killed by the police” and that she desired “to put some action behind my frustration, behind my anger, behind the helplessness that I’ve been feeling.”

Today I voted for my rights, my ancestors who give me strength, and his future!
Love you son #IVoted pic.twitter.com/mGIv3nEwFr

Engaging social media graphics were posted across platforms to urge all hoopers to make sure they were ready to exercise their right to vote.

Calling all hoopers young and seasoned! It’s time for all “Hoopers Vote”, Today is Hoopers Vote Day and I encourage all of my Ballers and shot callers to get out there and get registered. #HoopersVote #LetsGo We have to be the change we want to see!! pic.twitter.com/25tySZUN1J

When speaking with ESPN about Hoopers Vote, WNBPA executive director Terri Jackson connected voting to the causes to which WNBA players dedicated their 2020 season:

Along with their involvement with Hoopers Vote and More Than a Vote, Nneka and Chiney Ogwumike, along with their sister Olivia, will be serving as poll workers in their hometown of Houston, Texas.

As Chiney wrote for Cosmopolitan.com:

On Nov. 3, I will be working the polls at the Toyota Center, where the Houston Rockets play, on Election Day with my sisters. The last time I was there, I remember hanging court-side with my big sis, watching James Harden and company fight for a victory. But now we are in the fight for our lives. Our collective votes will determine our next four years, as well as who sits in the country’s most sacred seat in that historic Oval Office. Don’t wait on the sidelines during the most important game of our lives.

in many ways, I am privileged.

in the middle of this pandemic, I am fortunate to have a job & one that I love.

for years, I have been on a grind to prove myself by working through birthdays, holidays, etc… but this feels different.

After opting out of the 2020 WNBA season, Renee Montgomery has become a multimedia social justice warrior, utilizing her platforms to advocate for a variety of causes, including voting through More Than a Vote and Hoopers Vote.

Last week, she spoke with the Washington Post Live about getting out the vote, in spite of inconveniences and obstacles.

Determination is a beautiful thing… Wait and practice your power #vote @3rdofNovember1 https://t.co/gK1H3A1kZk

The night before the election, Montgomery, in partnership with More Than A Vote, hosted a virtual election eve pep rally, encouraging young athletes and fans to share their voting experiences.

Can you believe it? Election Day is Tuesday!

Other WNBA players urgently expressing the importance of voting include Breanna Stewart, Candace Parker, Candice Dupree, Layshia Clarendon and too many others to name.

A look into how and why the @WNBA and its players have been at the forefront of the social justice movement. pic.twitter.com/9I0dBhNPuV