Will the Liberty, Fever or Lynx join the WNBA free agency frenzy? 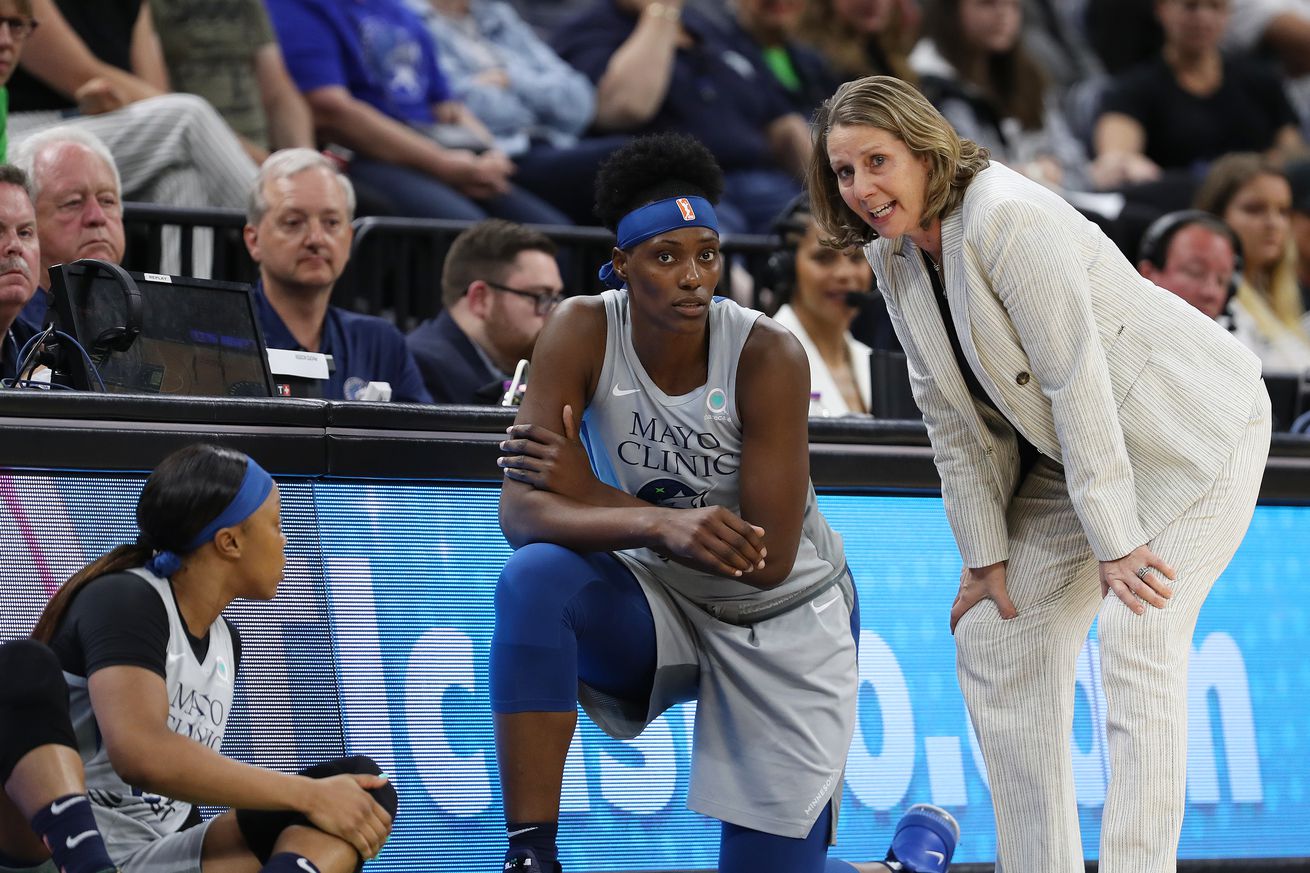 Cheryl Reeve instructs Odyssey Sims and Sylvia Fowles during a WNBA game in 2019. Will any new Lynx faces join Reeve, Fowles and Sims in Minnesota for the 2020 season? | Photo by Jordan Johnson/NBAE via Getty Images

In a WNBA free agency period featuring unprecedented player movement, three teams have been particularly quiet: New York Liberty, Indiana Fever and Minnesota Lynx. What should we make of these teams’ decisions to lay low?

The 2020 WNBA free agency signing period has been frenetic.

Many of the league’s best and brightest have crisscrossed the country, with the likes of Angel McCoughtry, DeWanna Bonner, Skylar Diggins-Smith and Courtney Williams donning new colors.

Yet, among this mind-blowing movement, some of the quietest free-agency decisions may have been the most consequential. The 2018 WNBA champion Seattle Storm re-signed 2018 league MVP and Finals MVP Breanna Stewart and the 2019 WNBA champion Washington Mystic re-signed 2019 WNBA MVP Elena Delle Donne. Not insignificantly, the legendary Sue Bird and 2019 Finals MVP Emma Meesseman also re-upped with the Storm and Mystics, respectively.

Because of these all-time talents, the Storm and Mystics can maximize their championship potential with minimal movement. Each team thus far has added only one new player each, with Morgan Tuck joining Seattle via trade and unrestricted free agent Leilani Mitchell returning to Washington.

However, most WNBA teams need to do more to raise their 2020 playoff and title prospects, which explains all the free agency action. It thus is curious that three teams — New York Liberty, Indiana Fever and Minnesota Lynx — have resisted making moves. For these teams, is an absence of moves a good move? Why have the Liberty, Fever and Lynx chosen to sit out the free agency frenzy?

The New York Liberty launched the 2020 free agency signing period by inking a deal with unrestricted free agent Layshia Clarendon, most recently of the Connecticut Sun. During the 2019 season, then-head coach Katie Smith failed to settle on a floor general. By almost immediately agreeing to a contract with Clarendon, Liberty general manager Jonathan Kolb has ensured that new head coach Walt Hopkins will begin his tenure with a reliable point guard, one who can play alongside, ahead of or behind the all-but-official No. 1 pick Sabrina Ionescu.

The arrival of Ionescu will overshadow the addition of Clarendon. However, the way Kolb and Hopkins have spoken of Clarendon suggests she could have a multiplier effect in Brooklyn, capable of having significant, extensive impact. In a team statement, Hopkins emphasized:

Layshia is an elite facilitator and floor general with an extremely high basketball IQ. She not only leads vocally, but also by consistently modeling a tireless work ethic and respect for those around her. She is going to be a massive boon to our roster and our team culture — both on, and off of the court.

Presumably, Hopkins and Kolb envision Clarendon serving as a mentor for Ionescu, as the well as for 2019 No. 2 draft pick Asia Durr. Durr did not have a totally lost rookie season but repeated injuries curtailed the opportunity for consistency and improvement. A healthy Durr, steadied by guidance from Clarendon, could act as a new addition for the Liberty.

Based on the extension she agreed to last October, Kiah Stokes also will be returning to Liberty in 2020, serving as another “like-new” addition.

Bria Hartley, however, will not be returning after signing with the Phoenix Mercury.

Tina Charles’ status remains unsettled and she also has been linked to Phoenix. While the Mercury have made multiple big moves, they have enough ammo to swing a deal for Charles. If a Mercury-Liberty trade materializes, the Liberty could bring in more draft picks, and potentially an emerging young player like Brianna Turner, who played her rookie season in Phoenix.

So, even as the Liberty have made just one free agency move so far, the team’s roster will look different in 2020 —and promising. Ionescu would raise New York’s ceiling. The Liberty also can expect internal improvement from 2019 WNBA All-Star and 2020 WNBL MVP Kia Nurse, French phenom Marine Johannès (as long as she re-signs) and the ever-intriguing Han Xu, in addition to growth from the aforementioned Durr.

In accepting general manager duties of the Indiana Fever, Tamika Catchings insisted on bringing her “championship mentality” back to the organization. However, the Fever have missed the playoffs every season since Catchings retired in 2016 and vaulting Indy into the playoff picture, much less the championship conversation, would require significant roster changes.

Yet, Catchings has been rather quiet so far, retaining restricted free agent Tiffany Mitchell and unrestricted free agent Betnijah Laney, and adding one new free agent in Bernadett Határ, a 6-foot-10 Hungarian with extensive EuroLeague experience. As identified by Howard Megdal, Catchings’ ability to reconstruct the roster has been constrained because the Fever only had one open roster spot entering the offseason — a spot now occupied by Határ.

Of course, Catchings could choose to make trades, as many teams have done.

Instead, it appears Catchings views new head coach Marianne Stanley as her big “free agent” addition. As she told the Indianapolis Star, “I’m excited about the direction we’re going in. I’m excited about working with Marianne. We’re a lot alike; thus far it’s been a lot of fun.” Catchings also has highlighted the importance of allowing Stanley to implement a system and develop players, noting, “Marianne has proven time and time again what it takes to develop your players and to put them in the right position.”

Even if Catchings has aimed to inspire excitement in Indy by invoking “playoffs” and “championships,” she seems committed to a patient process. Considering she did not win her championship until 2012, her 10th year in the league, she understands that patience can produce excellence.

Furthermore, the return of Victoria Vivians should not be overlooked. Vivians missed the entire 2019 WNBA season after tearing her ACL while playing overseas last WNBA offseason. She recently returned to the court for Israel’s Maccabi Bnot Ashdod. Back in the W, expect Vivians to serve as the efficient scoring option she showed herself to be during her 2018 rookie season. Her nearly 40-percent 3-point stroke, in particular, can maximize the Mystics-like offense Stanley intends to implement.

Maybe patience and playoffs will define the Fever in 2020?

On the coaching side, change has been the order of the day for the Minnesota Lynx.

Yet, Reeve, who also serves as general manager, has yet to add any new players, even as the Lynx roster has obvious holes. The point guard position, in particular, stands as a glaring need.

Last season, the Lynx struggled to replace the retired Lindsay Whalen’s playmaking. While Odyssey Sims turned in a career year in her first season in Minnesota blue and gray, she is not a natural point guard. It thus seemed logical for the Lynx to pursue someone like Skylar Diggins-Smith, who could have orchestrated the Minnesota offense alongside Sims. Instead of adding a point guard, the Lynx lost one, letting Danielle Robinson sign with the Las Vegas Aces as an unrestricted free agent.

Minnesota also may be without Sims: It is rumored that she is pregnant and could miss all of the 2020 season.

Napheesa Collier proved during her rookie campaign that she apparently can do it all. But playing the point would stretch the malleable Collier too far. It seems that Reeve would be wise to acquire a point guard who can maximize Collier’s offensive game, as well as that of Sylvia Fowles.

Still-available unrestricted free agents who could fill a playmaking role include Alex Bentley (previously with the Atlanta Dream) or Tamera Young (previously with the Las Vegas Aces). Possibly, Reeve intends to elevate Lexie Brown, even though she primarily has served as a 3-point shooter during her time in the W.

With Fowles entering the first year of the two-year extension she signed near the end of the 2019 regular season, it would make sense for the Lynx to do all they can to contend in Fowles’ final years. All the more, after Reeve exhibited impressive roster wizardry during the 2019 offseason, earning her the WNBA Executive of the Year award, it is disappointing that she has not sought to do the same this season.

Or, maybe Reeve is simply biding her time for an unexpected blockbuster trade.