Wilma Rudolph and the college basketball career that never was 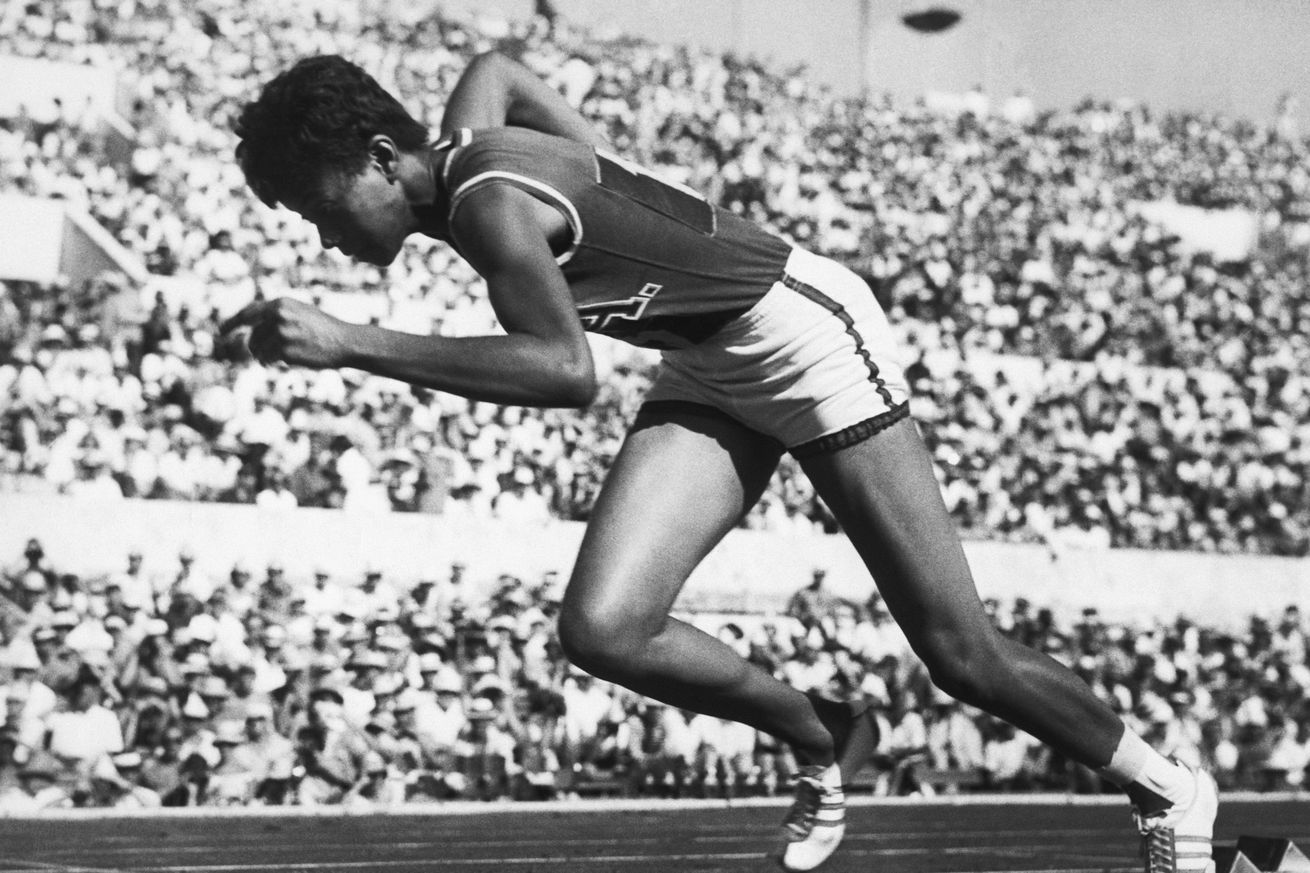 Wilma Rudolph bursts from the starting blocks at the 1960 Olympic Games, showcasing the length and speed that also made her a threat on the basketball court. | Getty Images

As the disappointment about the cancellation of the 2020 NCAA Tournament lingers, it is worth remembering the women athletes who, due to intersecting discrimination of race and gender, never had the opportunity to play basketball beyond high school. Might Wilma Rudolph have been a women’s college basketball legend?

Though it was the absolutely necessary decision, it remains disappointing that the 2020 NCAA Women’s Tournament was canceled, leaving the following questions forever unanswered:

Unfulfilled opportunities are not out of the ordinary in the history of women’s basketball.

The struggle to get on the court

Even after overcoming outmoded ideas about feminine frailty, the second-wave feminist movement in the late 1970s and the passage of Title IX, which spurred more social acceptance for women athletes, aspiring basketball talents still found opportunities wanting and waning.

The American boycott of the 1980 Olympic Games in Moscow meant the 1980 Team USA women’s basketball team did not have the opportunity to show their stuff against the Soviet Union, the world’s best team at the time. Thus, they were denied the opportunity to establish on the international stage much-needed momentum for the Women’s Professional Basketball League (WBL). Instead, the league folded in 1981, and the next women’s pro basketball experiment, the Women’s American Basketball Association (WABA), met a similar fate rather quickly, surviving a mere two months in 1984.

Because of this instability and inconsistency, the legends of the women’s game were unable to carve out professional careers in the United States. The likes of Ann Meyers, Lynette Woodward and Nancy Lieberman took advantage of paid basketball opportunities while, however curious, Cheryl Miller and others would never wear a professional uniform.

There is a lost generation of women’s basketball talents that never had such opportunities though they were not anonymous athletes.

Wilma Rudolph would become a world-renowned track star, but basketball was her first love. Many of the other young, southern black women who competed for the Tennessee State Tigerbelles, Tuskegee Tigerettes and U.S. Olympic track and field teams of the 1940s, 1950s and 1960s also began athletic careers on the high school basketball courts of the segregated South.

Wilma Rudolph: A women’s basketball star that never was

Throughout the 20th century, organized basketball opportunities existed for women of color. In the 1920s, Ora Washington and Inez Patterson suited up for the Philadelphia Tribune Girls, often challenging Bennett College, which maintained a robust women’s basketball program into the 1940s.

Yet, the ramifications of the Great Depression and World War II, in combination with a prioritization of athletic opportunities for black men due to the modern civil rights movement, resulted in a decline in post-high school organized basketball opportunities for young black women.

Many young black women still embraced the game, though, including a young Wilma Rudolph.

When Rudolph finally recovered from the childhood polio that consigned her to leg braces until the age of 12, it was basketball that inspired her to explore her newfound physical capacities.

In her 1977 autobiography, Rudolph wrote:

That summer, I went over to this playground in town, and all the kids were around, playing a game called basketball. I watched them for a while, saw how much fun they were having, studied what they were doing, and I said to myself, ‘Wilma, tomorrow…tomorrow you’re going to see what it feels like to play a little basketball.’

The young Rudolph quickly became a serious student of the game, insisting that, by the time she was a teenager, “I wasn’t obsessed with boys the way a lot of girls were; I was more obsessed with basketball and with improving my game.”

As a ninth-grader at Clarksville, Tennessee’s Burt High School, she devoted herself to defense, using a defensive relentlessness to earn her way on the court. She later recalled:

Sitting on the bench, I became fascinated right away with the way people dribbled up the court, their tempos, their gaits, slow or fast. I noticed that if you look into their eyes, you could tell if they were concentrating on handling the ball or else concentrating on what play was coming….I realized early that to have the ball stolen from you, in full view of everybody, is demoralizing and will throw off the rest of your game. So I concentrated on watching people dribble…and I made a science out of it for myself. I knew that if I couldn’t make the basketball team for any other reason, I’d make it for being able to steal the ball. That’s how badly I wanted to play.

In order to sharpen her speed and stay in shape, Rudolph ran track during the basketball offseason. Even though she showed precocious sprinting talent, she did not enjoy it and instead dreamed of the court while she trained.

As a sophomore, Rudolph not only earned a starting spot but also emerged as a star — her 5-foot-11 frame making her a versatile threat from the guard and forward positions. Her basketball coming out party was a mid-season tournament held at Burt High School in which Rudolph reportedly did not miss a shot on her way to scoring 32 points.

With 11 wins and four losses, Rudolph and Burt High headed to the Tennessee High School Girls’ Championship, held at Pearl High School in Nashville. Although Burt would not win the segregated state title, Rudolph was a standout. She scored 28 points and 27 points to earn a berth on the All-Tournament team.

How a high school hooper became an Olympic sprinter

Serving as referee for the tournament was Ed Temple, who also was the head coach of the Tennessee State Tigerbelle track and field team. Intrigued by Rudolph, Temple soon began to recruit her and eventually convinced her to train with him and the Tigerbelles during the summer of 1956.

As part of his pitch to Rudolph, Temple talked hoops. She wrote in her autobiography, “I remember the ride up to Nashville; Coach Temple and I talked about basketball the whole time, not track, basketball.”

After training with Temple, Rudolph made the 1956 U.S. Olympic track and field team as a 200-meter sprinter and member of the 400-meter relay team, which won bronze in Melbourne.

She returned to the court for her junior season of high school basketball, averaging 35 points per game, but it would be her final season. Rudolph realized that track and field opened doors — from a work-study scholarship at Tennessee State University to additional opportunities to represent the United States in international competitions.

For instance, Tennessee State only reluctantly funded its incredibly successful women’s track and field team, refusing to allocate any other money away from men’s football and basketball to cover other women’s sports.

Track and field worked out quite well for Rudolph, though. At the 1960 Olympic Games in Rome, she captured a trio of gold medals and the affections of sports fans from around the globe. If viable basketball opportunities had existed, however, the narrative of her historical significance might have been different.

Alice Coachman, Tex McDaniel and other black women track Olympians who were hoopers

Rudolph’s story is also true for other young black women who won track and field medals for the red, white and blue.

In contrast to Tennessee State, Tuskegee organized intercollegiate basketball contests for women. Alice Coachman, who became the first black woman to win an Olympic gold medal (high jump, at the 1948 London Games), starred on the basketball court for the Tigerettes.

Another high-jumping, gold medal-winning Tigerette is Mildred McDaniel, who likewise made a name for herself as a hooper. Literally. She earned the nickname “Tex” because she reportedly dribbled like a Texan. She gracefully guided her slim frame over the high jump bar to win gold at the 1956 Melbourne Games, but it seems she must have been a terror on the court.

Much to the dismay of Ed Temple, many of his track stars continued to have a basketball jones. In defiance of their coach’s notoriously strict demands, Tigerbelles would play intramural basketball, unconcerned about exhausting their sprinting and jumping energies during informal five-on-five contests.

It thus seems more than imaginable that Tennessee State could have had quite the hoops squad.

Yet, while young black women in the South had to table their hoops dreams, their white counterparts had the opportunity to play for industrial-sponsored AAU teams throughout the 1950s and into the 1960s, exemplified by Nashville Business College and Haines Hosiery in North Carolina.

The historical significance of women’s basketball goes beyond stats

The overlooked and unfulfilled basketball careers of Wilma Rudolph and others remind that the history of women’s sports exceeds the quantifiable.

The inconsistent, often inaccurate recorded history of women’s basketball means historical significance cannot be determined by the number of points scored, games won, awards accumulated or titles taken. As such, the incomplete 2019-20 college basketball season should not dull the significance of the sport’s signature figures.

For instance, while Dawn Staley will not (yet) have another national championship by her name, she still stands as a successful black woman coach, an example of the commitment required of women of color to succeed in the world of sports.

Likewise, although Sabrina Ionescu will not notch more triple-doubles or claim a national title, the daughter of Romanian immigrants still shattered stereotypes of ethnicity and gender with her swaggering, symphonic style of play.

The 2019-20 college basketball may be incomplete but its significance is not.