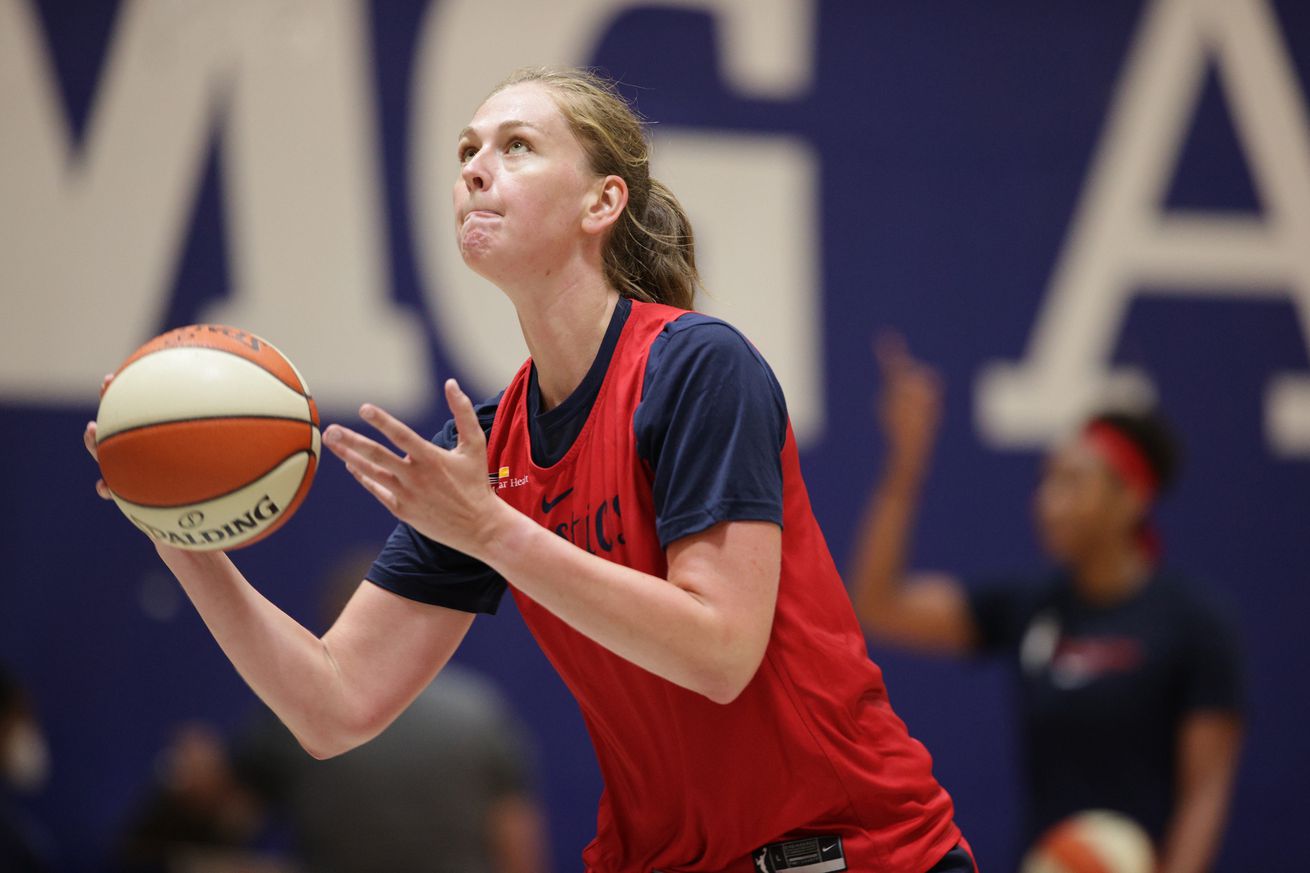 Emma Meesseman as seen at IMG Academy preparing for the 2020 WNBA season. | Photo by Ned Dishman/NBAE via Getty Images

The defending champion Washington Mystics could be without Elena Delle Donne and Tina Charles, leaving Emma Meesseman with the monster task of leading the team. Also missing from the Mystics’ 2020 campaign: Natasha Cloud and LaToya Sanders.

A handful of players have decided to opt out of the season due to COVID-19 and/or a desire to use their platform to continue the battle against racism. And when the WNBA season does take place, there will be no fans in attendance, and all games will be played at one location — IMG Academy in Bradenton, Florida — to avoid further spreading of the coronavirus.

The Washington Mystics won the WNBA Finals last year in a five-game thriller of a series against the Connecticut Sun. While the Mystics lost an All-Star guard in Kristi Toliver to the Los Angeles Sparks, the team traded for an even more talented player on April 15: center Tina Charles. Unfortunately, Charles may not play this season due to a health concern for which she is seeking a medical exemption, and the Mystics already have two players who’ve opted out of their 2020 title defense. Plus, reigning WNBA MVP Elena Delle Donne may sit out due to the coronavirus because of her underlying health condition, Lyme disease.

Potential problems for the Mystics

Up to four key players could be out of rotation

Last year’s starting point guard Natasha Cloud will be sitting out to work on social justice reform, while last year’s starting center LaToya Sanders is sitting out as a health precaution during the ongoing COVID-19 pandemic. Superstars Elena Delle Donne and Tina Charles also could miss the season as both have preexisting health concerns that could make them more vulnerable to the coronavirus.

Neither Delle Donne nor Charles has traveled to IMG Academy.

When the Mystics acquired Charles during free agency it appeared they could match the growing talent of the Las Vegas Aces, who added Angel McCoughtry to a star-studded cast this offseason. But with neither Charles nor Delle Donne, the Mystics’ talent level would be compromised.

The loss of Cloud is a big deal too. She was a key part of the Mystics’ championship run in 2019 and her intangibles will be hard to replace. She and Sanders were the only two Mystics to start every single regular-season and playoff game last year.

Charles’ rebounding was supposed to be huge for a Mystics’ team that was tenth in rebounding in the league last year. Delle Donne has never averaged better than 8.4 rebounds in a single season and Sanders was second on the team with just 5.5 boards per game. If all three of those players miss the season, the Mystics could be even more doomed on the glass. The 6-foot-4 Meesseman and the 6-foot-4 Alaina Coates, who was signed to replace Sanders, would be the tallest players on the team.

Mitchell had by far the best season of her career last year with a 12.8 scoring average across 32 games and 27 starts. It may seem odd for a player to have her best season at age 34, but Mitchell made the most of a career-high 30.3 minutes per game with Diana Taurasi out for the Mercury.

“She was a prime target for us this offseason regardless of what we knew at the time about Kristi,” Mystics head coach Mike Thibault said of Mitchell in a recent Zoom call.

Toliver, who signed with the Los Angeles Sparks in the offseason, is a three-time All-Star who has averaged double-figure scoring nine times compared to Mitchell, who has only done it once. Last year Toliver topped Mitchell with 13.0 points and 5.9 assists per contest, but the Mystics aren’t losing much from behind the arc with the addition of Mitchell. The former Utah Ute has a career 3-point percentage of 39.6, higher than Toliver’s 38.7 percent.

“Obviously we have a lot of scoring that’s out (and) my job is to make sure everyone gets involved,” Mitchell said of her role. “Just make everyone else’s job easier. Whether I’m driving and kicking to people for open shots or calling certain plays for certain people to get open. And then of course my shooting. And then more a of mental aspect as well and just organizing the team and making sure we’re all on the same page.”

Toliver has made 171 more triples than Mitchell in six less career games, though, and taking away her, Cloud and bench player Shatori Walker-Kimbrough (now with Phoenix) may knock the Mystics off the top spot in 3-pointers made.

Potential promise of the Mystics

Meesseman (age 27) is known for her Euro step and mid-range game, but can also hit from downtown as she displayed with her incredible 18-of-31 performance during the 2019 postseason.

Before winning the 2019 Finals MVP award, Meesseman was thought of as a good player, but not a star. Now there is no question that she is one of the most dangerous power forwards in the league. She was already going play a bigger role this year than ever before, but now she must put a defending-champion team on her back as the team’s best player.

Thibault is confident that the seventh-year player out of Belgium can step up, saying, “I think Emma looks at everything as a big adventure in life and I think that kind of rubs off on teammates.”

“It’s a special season,” Meesseman said. “Some of us are here, some of us are not. So we are here with the team that we have. We’re only focusing on that.

“I’m just approaching this like ‘we’re gonna have fun and we’re gonna give it our best and get better throughout the season.’”

An Ariel and Aerial elevated attack

The Mystics’ two unsung heroes have the same name but different spellings. Both will be key members of the team in 2020.

“I think this (season) is an opportunity for Ariel Atkins and Aerial Powers to assert themselves as a main cog in our offense,” Thibault said of the backcourt duo.

Atkins (age 23) started for Washington as a rookie in 2018 and again in 2019. She has a sweet 3-point stroke and loves knocking down shots from the corners. She has immediately fit in with the Mystics’ veterans and is a consistent contributor, averaging 10.8 points and shooting 35.7 percent from distance through two seasons.

Powers (age 26) is listed as a shooting guard, but could serve as a point guard with Cloud out because she has top-notch ball-handling and driving abilities. She was fourth on the Mystics in scoring last year, just ahead of Atkins, and deserves to become a starter, though she could be effective again off the bench.

Thibault has again worked his magic as the general manager of the Mystics by getting Charles, but the Mystics are going to have a tough time if both she and Delle Donne are out. They may not even make the playoffs. If it’s just Delle Donne, Cloud and Sanders sitting out, the Mystics should be middle of the pack and if Delle Donne plays Washington could compete for a repeat championship.