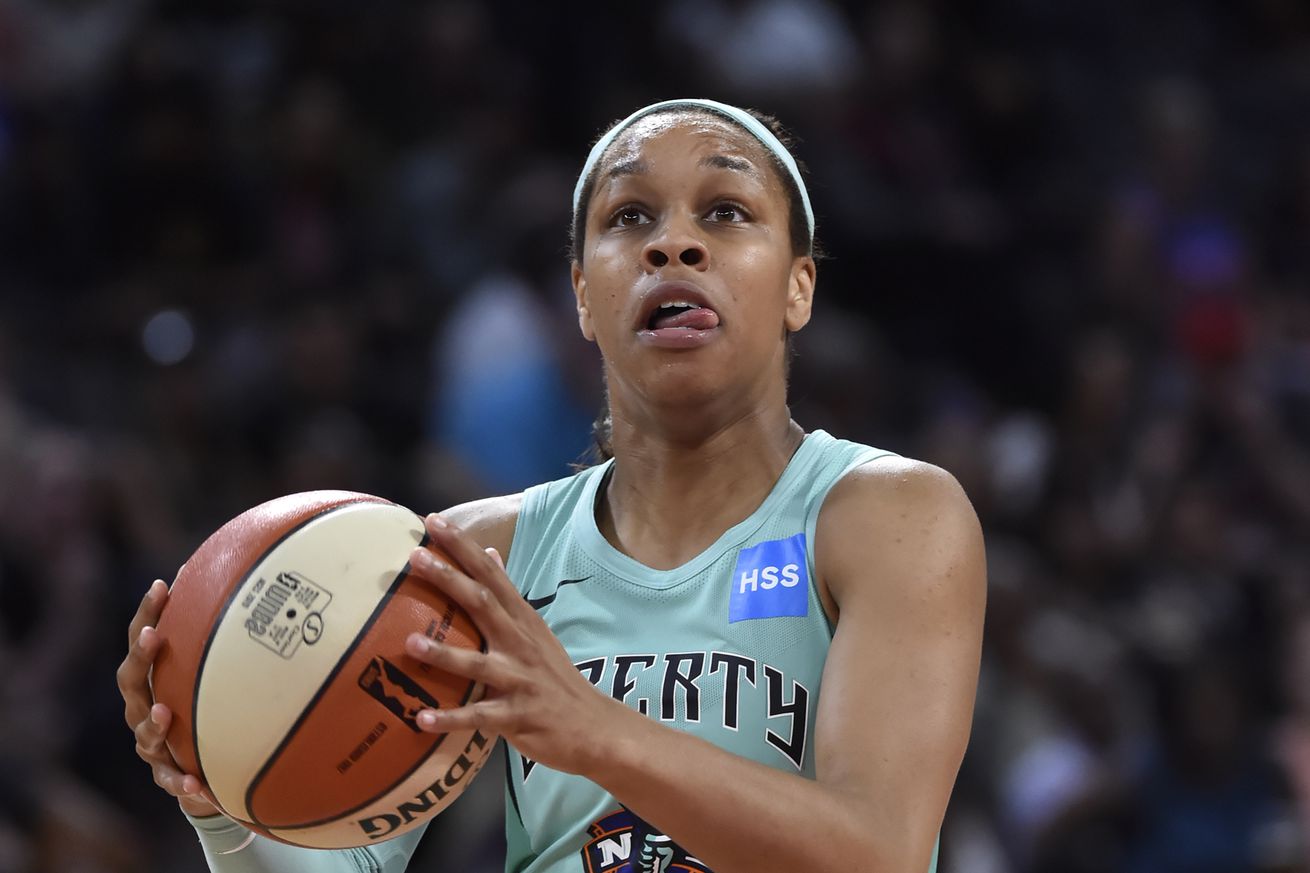 Don’t forget about Asia Durr! A turnaround sophomore season from Durr could have the Liberty in the fight for the playoffs. | Photo by David Becker/NBAE via Getty Images

While Sabrina Ionescu’s debut inspires excitement, there are other reasons to be intrigued by the New York Liberty’s 2020 prospects. However, the Liberty’s roster construction also raises some concerns, possibly stalling their rise from the bottom of the standings.

The New York Liberty are back! Maybe?

Over the past few seasons, the franchise had fallen from its flagship status, instead becoming an example of uninterested and inadequate investment in women’s sports.

The 2020 season was to be the official relaunch of the Liberty: a new owner, a new home, a new coach and a new star. Ideally, all would coalesce into a new era of Liberty basketball.

But rather than going to Brooklyn, the Liberty are heading to Bradenton, where the uncertain, exceptional circumstances of the 2020 season could short circuit the organization’s ambitions.

The challenges facing the Liberty also go beyond the stresses of playing basketball in the Pandemic Peninsula. For all the excitement about a reinvigorated Liberty, are they too new, possibly preventing the team from establishing the trust and cohesion needed to succeed in the odd environment at IMG Academy? Or conversely, could all the changes the Liberty have undergone allow them to flourish over the course of the 22-game 2020 season?

Potential problems for the Liberty

While many 2020 draftees had their professional dreams paused as the absence of training camps prevented potential rookies from earning a roster spot, the Liberty not only chose to roster all six rookies that they drafted — Sabrina Ionescu, Megan Walker, Jocelyn Willoughby, Jazmine Jones, Kylee Shook and Leaonna Odom — but also recently added Joyner Holmes.

From one perspective, this number of fresh faces makes sense. Head coach Walt Hopkins intends to implement a modern, analytically-inclined system. The organization thus has identified players who will best fit with this system, allowing the team to together develop into whole that is greater than the sum of its parts.

In theory, it all sounds great. But the inconveniences of reality (as we know all too well in the era of COVID-19) can infringe upon this ideal vision.

Although Hopkins has been hailed as a “genius,” he is unproven and inexperienced as a manager of players. Establishing a rotation where every player is invested, understanding and accepting her role will be especially important. Numerous dissatisfied and disengaged young players, already facing the challenge of playing their first professional season in mentally-draining circumstances, could lead to a spiral of losses.

Layshia Clarendon recently announced that she and her wife are expecting their first child. Well, during the 2020 season, she might get some babysitting practice.

While an exaggeration, the corollary to the Liberty’s excess of rookies is a relative absence of veterans.

Clarendon, signed by the Liberty early in the free agency period, stands as one of the squad’s few veteran leaders. As one of the league’s most thoughtful, conscientious figures, she is an ideal role model for young players not only trying to find their place on the court, but also off the court. On the court, Clarendon is an ultimate gamer, willing to fill whatever role helps her team win. Off the court, she is unafraid to speak her mind, using her platform to push for progressive change.

@layshiac giving high praise for W players who have been at the forefront of doing the work. Choose action. (via Freedom, Equality, and the Power of Our Vote)

Amanda Zahui B. has also asserted herself as a powerful spokeswoman, speaking out against racism as fearlessly as she attacks the glass. Kiah Stokes, who sat out the 2019 season, brings her veteran savvy back to the Liberty.

However, some additional veteran voices might help the young Liberty find their footing. In particular, it would seem that Reshanda Gray could have been a valuable part of the 2020 Liberty. Instead, Gray will take her spirited play to LA.

When Rebecca Allen announced that she would skip the 2020 season, the Liberty replaced her with their seventh rookie, Joyner Holmes. While signing another steady veteran would not guarantee success, the likes of Essence Carson, who was picked up by the Mystics, or Tamera Young, who remains unsigned, could have served as a wizened presence.

Nevertheless, the Liberty do have a few players who, while not-yet-seasoned vets, do have an understanding of what it takes to survive in the WNBA. Might Asia Durr and Kia Nurse be the keys to the Liberty’s success?

Potential promise of the Liberty

The development of Asia Durr

The No. 2 pick in the 2019 WNBA Draft, Asia Durr entered her inaugural professional season with fairly high expectations. It was anticipated that the electric scoring ability she showed as a collegian would translate to the WNBA. At Louisville, she often looked like a female Damian Lillard, crushing opponents by cooly and confidently drilling jumpers.

Unfortunately, nagging injuries prevented the Liberty from seeing the best version of Durr during her rookie season. She played only 480 minutes, with her interminable hamstring troubles contributing to below-expectation shooting percentages and scoring numbers. She underwent offseason hip surgery to fix her ailments, hopefully allowing her to enter the 2020 season in top form.

Fully healthy, Durr could emerge as the driver of the Liberty’s offense, using her ability to score all-over-the-floor to occupy the attention of opponents and open opportunities for teammates. Durr’s emergence is especially essential if the Liberty are to legitimately contend for a playoff berth.

So is the continual improvement of Kia Nurse.

After a solid but unspectacular rookie season, Nurse emerged as an impact offensive player early in her second season. A full-time starter, Nurse would be voted an All-Star starter, averaging 15.4 points per game at the All-Star break, a more than six-point per-game improvement over her rookie-season scoring average. 3-point shooting propelled Nurse’s offensive growth. Over the first half of the 2019 season, Nurse was attempting almost six 3-pointers per game, hitting them at a more-than-adequate 35-percent rate.

SEASON IN REVIEW: @kianurse _ Nurse came in hot during her 2nd season! From being voted to her first-career @WNBA All-Star game and earning a starting position, to participating in the 3-point contest, to putting up a season-high 26 points on three different occasions, the @jumpman23 athlete had herself a season! _ SWIPE for highlights! #LIBERTYLOUD

Nurse’s scoring slipped to 11.5 points per game during the second half of last season, largely because her number of 3-pointers attempted fell to below five per game. This decrease, in combination with a decline in her 2-point field goal percentage, made her a less effective and efficient player offensive.

Due to his analytical inclinations, it can be expected that Walt Hopkins will more fully weaponize Nurse’s willingness to fire from deep. Surrounded by more dangerous offensive talents in a more dynamic offensive system, Nurse should find herself taking — and making — more 3-pointers.

Maximizing Nurse’s shooting, along with Durr’s scoring, could make the Liberty one of the best, and most fun to watch, offenses in the league. Someone else should also help this cause...

The superstardom of Sabrina Ionescu

Oh yeah, that Sabrina Ionescu is supposed to be pretty good.

Before she arrived in Eugene, University of Oregon’s women’s basketball was an afterthought. Four years later, the Ducks are a powerhouse. It is anticipated that Ionescu will bring her transformative power to the Liberty, as well as to the entire WNBA.

The Minnesota Lynx long had floundered, finishing 13-21 in 2010 despite having the likes of Seimone Augutus, Lindsay Whalen, Candice Wiggins and Rebekkah Brunson on their roster. Moore’s arrival in 2011 appeared to unlock everyone’s strengths, allowing the Lynx to emerge not only as a title-winning team but also establish themselves as a burgeoning dynasty.

The Liberty possess a somewhat similar mix of ingredients. Ionescu can serve as the pastry chef who puts it all together, producing a delightful treat for the Liberty faithful. Her time at Oregon, including her explosive performance against Team USA last fall, suggests she has the ability to do so.

ESPN’s Kevin Pelton has identified assist rate as a translatable metric for WNBA point guard prospects, and Ionescu possesses the best ever rate in his database. The Liberty, smartly, have stocked their roster with multiple above-average 3-point shooters. Just imagine a lineup of Ionescu, Durr, Nurse, Megan Walker and Kylee Shook playing five out, with Ionescu diming up her teammates for open threes.

Ionescu also attained the highest-ever ranking in Pelton’s “Versatility Index,” a fact that merely reinforces the versatility that is evident from watching her play. As such, she can fit with a variety of lineup constructions, such as the 3-point shooting focused one described above, where her triple-double-level rebounding abilities also will be advantageous. In contrast, she can serve as a shooter and off-the-ball option when she shares the floor with Clarendon, who is best playing as a traditional point guard.

In short, even if the Liberty are not instantly excellent with Ionescu, she will allow them to experiment with multiple basketball identities and, hopefully, determine what direction is best for the future of the franchise.

The unsettled and unsettling circumstances of the 2020 WNBA season could advantage the new, young Liberty. Because they know no “normal” together as a team, they will not be trapped by trying to do things as they did them before, allowing them to adapt, and adapt again, as needed. If so, the Liberty very well could be in the mix for a playoff berth, and maybe a surprise first-round win.

Yet there is also potential for disappointment — even disaster. The strains of the season could more acutely effect younger, less experienced and less emotionally mature players, resulting in the Liberty understandably struggling to match last season’s uninspiring winning percentage.