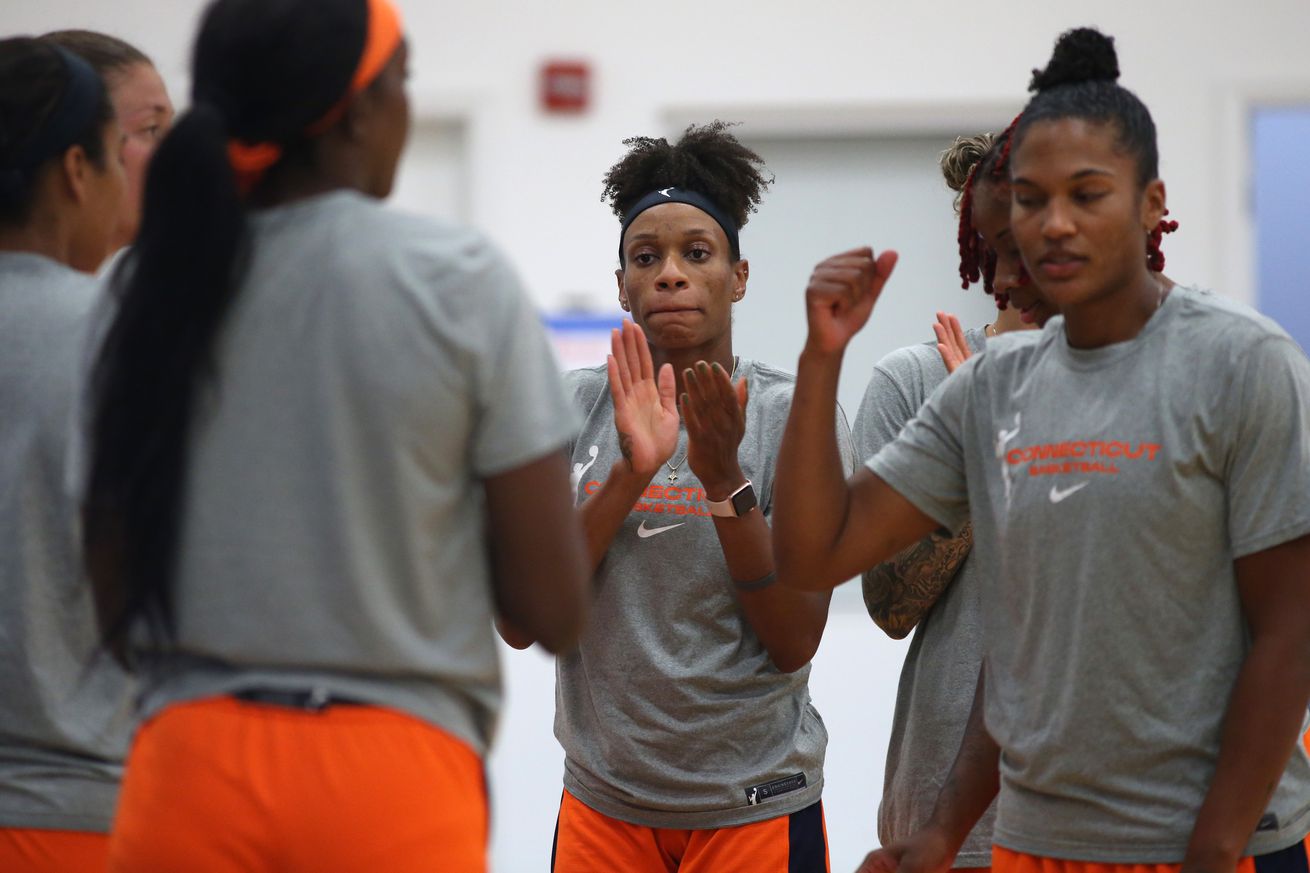 The Sun look a lot different than they did in 2019. DeWanna Bonner, 2014 champion with the Phoenix Mercury, is in and the team is still led by the reliable duo of Jasmine Thomas and Alyssa Thomas. | Photo by Stephen Gosling/NBAE via Getty Images

After a tumultuous offseason, the Connecticut Sun will need to overcome further adversity to return to the WNBA Finals in 2020.

The 2020 WNBA season is right around the corner. As the COVID-19 pandemic continues, WNBA teams are getting a clearer idea of what their lives and playing conditions will be like for the next few months.

The WNBA, which chose to hold a 22-game regular season remotely in Bradenton, Florida, has seen many of its top players opt out of the season — some out of concern for their health and some to focus on fighting social injustice in the United States.

There have also been positive COVID-19 tests within the WNBA ecosystem. Players who tested positive for COVID-19 must test negative twice before traveling to the “bubble” in Bradenton to join their teams.

When the season tips off on July 25, the Connecticut Sun — who finished 23-11 in 2019 and took the eventual champion Washington Mystics to five games in the WNBA Finals — will be dealing with a shorthanded roster due to the aforementioned conditions. All-WNBA center Jonquel Jones opted out the 2020 season, citing health concerns, while guards Natisha Hiedeman and Briann January tested positive for COVID-19.

This follows an up-and-down offseason highlighted by the acquisition of three-time All-Star DeWanna Bonner and evened out by the losses of 2019 All-Star Three-Point Contest champion Shekinna Stricklen and rising star and fan favorite Courtney Williams — both to the Atlanta Dream.

The Sun thus will expect a lot out of Bonner in her first season in Sun orange.

Potential problems for the Sun

To ask any one player to replace Jones’ individual production at center would be unfair and unrealistic.

Jones, standing 6’6”, has given the Sun consistent, star-level performances since bursting onto the scene in 2016, boasting a career Player Efficiency Rating (PER) of 25 and true shooting percentage of 61.1 percent. Last season, she led the WNBA in block percentage and ranked fourth in total rebounding percentage, safely anchoring the Sun frontcourt on both ends of the floor.

Without her, Connecticut will likely turn to a center-by-committee approach featuring Theresa Plaisance and Brionna Jones. While both players are sizable enough (Plaisance should, in theory, also be able to stretch the floor to the 3-point line), neither is close to Jones in terms of rim protection or low-post play.

Rookie Beatrice Mompremier, who signed with Connecticut after being waived by the Los Angeles Sparks at the roster finalization deadline, also is an option. The most athletic of the trio, Mompremier also is raw offensively. It also can be difficult for centers used to simply running rim-to-rim in college to adjust to the WNBA game, and Mompremier will need to quickly grasp the Sun’s defensive concepts if she is to make an immediate impact.

Backcourt depth will be an issue

With both January and Hiedeman out indefinitely, the Sun are extremely short on ballhandlers. Both players would be backing up incumbent point guard Jasmine Thomas, but she’s now on her own for the time being.

It shouldn’t take much statistical analysis to see why this is a problem. Thomas is an astoundingly durable player — she’s missed just two games in her career, which spans back to 2011 — but even she’ll need a breather here and there, and when she does, who will take her spot?

To be fair, a lack of traditional ballhandling isn’t the same as a lack of playmaking, and the Sun have a terrific open-court playmaker in Alyssa Thomas. Playing her at point guard, however, would take away from many of the advantages she normally gives the team at power forward — and magnify her weakness as an outside shooter.

Until January or Hiedeman returns, head coach Curt Miller might just have to roll with some unorthodox lineups. There aren’t many WNBA teams that are in ideal situations right now, and lots of players are going to have to adjust on the fly. The Sun are no different in this respect.

Potential promise of the Sun

In spite of her reluctance to shoot the ball from anywhere outside of the paint, there’s no doubt A. Thomas gives the Sun a matchup problem that most other WNBA teams are ill-equipped to deal with.

Affectionately dubbed “The Engine,” A. Thomas embodies her nickname with a physically overwhelming style of play that would fit an American football or rugby team just as well as it does the Sun. She’s a one-woman fast break, ranking third in the WNBA in total transition possessions in 2019 (per Synergy Sports) while shooting 61.5 percent on them. Her ability to grab rebounds and put defenses on their heels as a ballhandler from the power forward position is unique among WNBA players, and it gives the Sun a tremendous advantage in their transition game.

A. Thomas is also capable of raising her game to superhuman levels when her team needs her most. During the 2019 WNBA Playoffs, she averaged 16 points, 9.3 rebounds, 6.6 assists and 2.3 steals per game and played a full 40 minutes in four of the Sun’s five Finals games — all while dealing with torn labra in each of her shoulders.

If that sounds like a player you’d like to have on your team during a condensed season being played in unprecedented conditions, the Sun would probably agree with you.

Connecticut gave up a lot to acquire Bonner — both of its first-round draft picks in 2020 and one in 2021 — but there’s plenty of reason to believe that the deal was worth it.

The 6-foot-4 Bonner had a tremendous career with the Phoenix Mercury, making a name for herself as a perennial Sixth Woman of the Year candidate before moving into the starting lineup and providing All-Star-caliber play year in and year out. She also brings championship pedigree to Connecticut, courtesy of the two championships she won with the Mercury in 2009 and 2014.

While Bonner’s offensive game might be best known for long-range bombs several feet beyond the 3-point line, she’s also one of the WNBA’s best players at getting to the free throw line, using her long, sinewy frame to work her way from the perimeter into the paint and draw contact. Her career free throw rate is a very respectable 0.386, and her 167 total free throw attempts in 2019 ranked second in the WNBA.

This is something the Sun offense has been missing in recent years, and it’s not the only thing Bonner will bring to her own team. For one, she’s a great fit for the type of defense Connecticut will need to execute without Jones at center: aggressive, with lots of switching on the perimeter. Bonner has earned the reputation of being a solid perimeter defender, and her length will complement the physicality of the Thomases (no relation), ideally further igniting the Sun’s transition game.

Bonner’s two-way play is bolstered by her durability; she hasn’t missed a game since 2017. Having reliable starters like her and the Thomases hopefully will offset Connecticut’s depth concerns.

The Sun might have lost a lot between the end of the 2019 season and now, but with so many of the other top WNBA teams reeling from absences, it’s hard to count them out. They still have the horses in the starting lineup necessary to be a good team. If their backcourt reserves return healthy, the Sun should be in contention for a top-four postseason seeding.