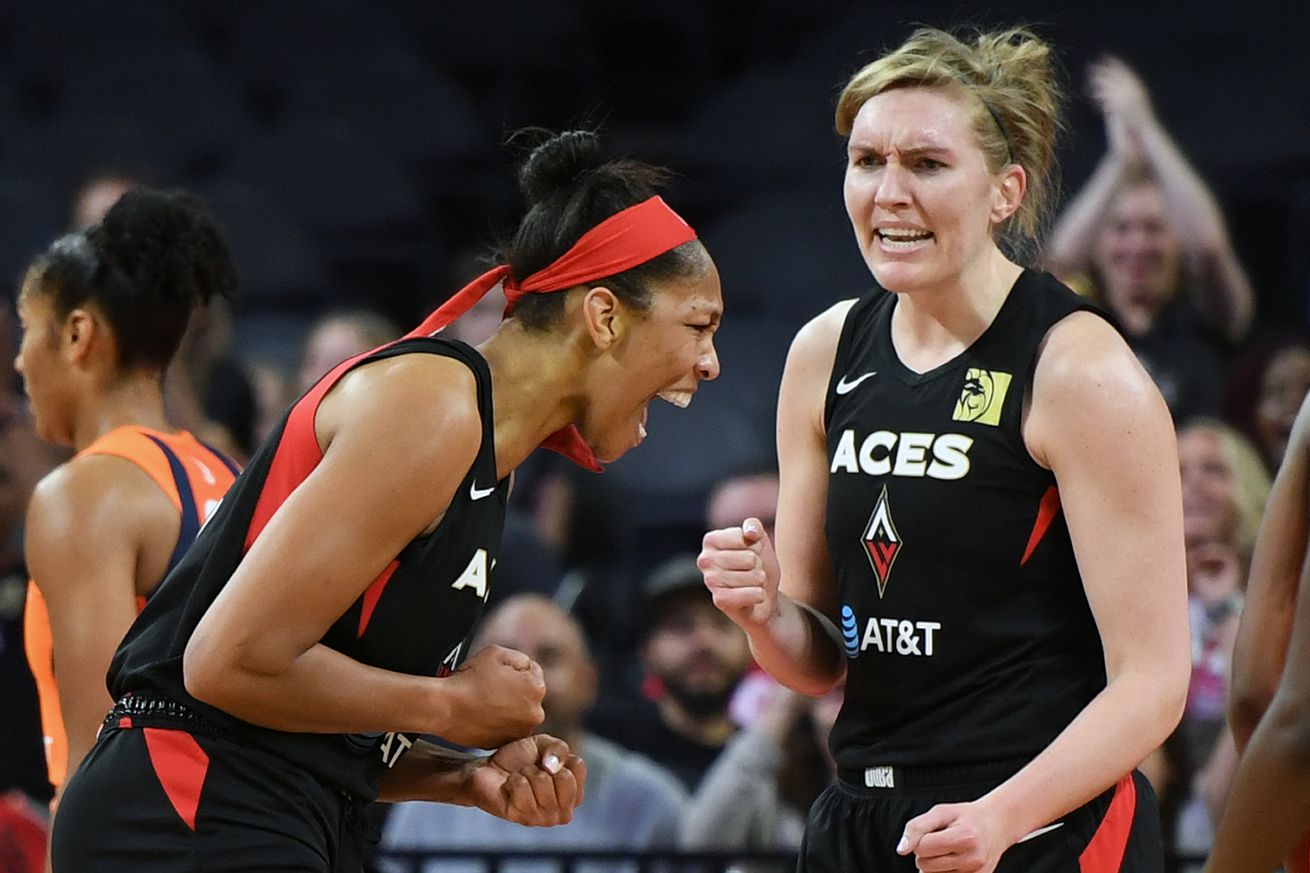 Yes A’ja, get fired up! Not only is the WNBA coming back, but the Las Vegas Aces should be championship contenders. | Photo by Ethan Miller/Getty Images

Despite Kelsey Plum’s injury and Liz Cambage’s absence, the Las Vegas Aces still claim one of the WNBA’s most talented teams. But can all this talent cohere to make the Aces into legitimate championship contenders?

The 2020 WNBA season is going to be a gamble. Might the team most familiar with gambling — the Las Vegas Aces — be best suited to succeed in this strange season?

The Aces’ connection to gambling goes beyond their location in Las Vegas. Last offseason, the organization opted to accelerate their timeline, announcing themselves as a championship contender by trading for Liz Cambage instead of allowing the team to grow more organically around A’ja Wilson. The inconsistencies that result from injuries prevented this gamble from absolutely paying off, although their playoff performance suggests it certainly wasn’t a mistake, as the Aces flashed their potential in the 2019 postseason.

This offseason, the Aces doubled down on their championship aspirations, signing longtime Atlanta Dream All-Star Angel McCoughtry. However, this gamble is complicated not only by the circumstances of the 2020 season but also by the injury to Kelsey Plum, who will miss the season due to undergoing surgery for a torn Achilles’ tendon, and the absence of Cambage, who will sit out the season due to underlying health conditions.

So, what are we to make of Vegas’s 2020 prospects? Will the cards they have drawn prevent them from fulfilling their championship ambitions? Or will they find themselves holding a powerful hand, putting them in play for the 2020 title? Here are the potential problems and promise of the Aces.

Potential problems for the Aces

No Cambage, no problem?

Absolutely not! She is one of the most delightfully dominant players in the WNBA, able to take over any game — not only through her play, but also her persona.

However, Cambage’s absence could open opportunities for the undeniable A’ja Wilson and the do-everything Dearica Hamby.

Last season, head coach Bill Laimbeer struggled to implement an offensive system that maximized all three. Instead, big games for Cambage came with lesser involvement for Wilson, and vice versa. Hamby had to serve as a super sixth woman, even as she showed herself more than capable of an expanded role.

The 2020 season thus could allow Wilson and Hamby to establish a rapport, forming a dynamic duo that results in Vegas running a more consistent offense.

Nevertheless, Cambage’s absence short-circuits the Aces’s long-term championship ambitions, as, in all likelihood, bringing a title to Sin City will require an offensive system that takes full advantage of Cambage’s, Wilson’s and Hamby’s special talents. The addition of another player who needs to the ball to be at her best on offense may further complicate this task.

The addition of Angel McCoughtry

McCoughtry was one of the best WNBA players of 2010s, willing seemingly unspectacular Atlanta Dream teams all the way to the WNBA Finals on multiple occasions. For a team intent upon a title, the addition of McCoughtry — a savvy veteran who knows how to win — makes sense.

McCoughtry is a master at manufacturing offense, methodically working her way into the midrange to elevate for a jumper or deliberately driving through the teeth of the defense to get to the hoop. She can operate as an offensive fail safe while also not sacrificing anything on the defensive end of the floor.

But do the advantages of McCoughtry outweigh potential disadvantages? In particular, orienting the offense around an aging McCoughtry could detract from the games of Wilson and Hamby.

Not to mention, McCoughtry has not (truly) played in the WNBA since injuring her knee in August 2018. Her performances for Dyanmo Kursk, in addition to her form in her Louisville homecoming game with Team USA, allay some concerns.

In short, McCoughtry still knows how to score. Nevertheless, the intensity of the 2020 season raises injury concerns for all older players, including the 33-year-old McCoughtry. It is probably not a coincidence that she suffered a knee injury during the compressed 2018 season.

The absence of Kelsey Plum

That the Aces must work in McCoughtry without Kelsey Plum, their presumed starting point guard, presents additional challenges.

After an up-and-down 2019 regular-season, Plum proved herself uncowed, emerging as Playoff Plum during Las Vegas’s postseason run. By almost always pushing the pace, Plum injected the Aces’s offense with vigor and vitality, consistently causing discomfort for the opposing defense. She also showed this brand of basketball during her time with Team USA.

It was easy to imagine that she would break out in 2020, showing herself to be a bona fide star. This lost opportunity makes her injury devastating on a personal level. Her absence also saps some of the potential of the Aces, both in 2020 and beyond.

Empowering Plum as the full-time starting point guard could have allowed the Aces to begin to develop into the dangerous offense that their talent suggests they should be. Instead, this process will be forestalled by a year, if not longer. It can often take players who have suffered Achilles’ injuries an additional year to regain their full comfort on the court (although the promising recovery of Breanna Stewart should inspire the already-insistent Plum).

In Plum’s stead, Vegas will turn to the speedy Danielle Robinson, who was signed as free agent in February. Although Robinson lacks Plum’s scoring chops, she can likewise push the pace. Expect her to also enhance the Aces’ perimeter defense, nabbing the steals needed to quickly turn defense into easy offense.

The promise of the Aces

The Aces can win in multiple ways

Despite the potential difficulties discussed above, the Aces could still thrive — and even triumph.

In the contemporary WNBA, efficient offensive systems are in fashion, epitomized by the 2019 WNBA Champion Mystics. Their offensive sum was seemingly greater than their parts because of a system that emphasized 3-point shooting and spacing.

In the confining cauldron of IMG Academy, such offensive cohesion could be hard to come by, as the routines and rhythms of a typical season will be nonexistent. Might a team that can play multiple ways be better suited to weather unfamiliar and unexpected challenges? (The return of the temporarily retired Carolyn Swords should also steady Vegas through the uncertainty and monotony.)

Depending on the day, the Aces can win games by just going to Wilson or McCoughtry or even Hamby. In short, Laimbeer and company can ride whoever is hot. Instead of worrying about a specific system stalling, just let a different star go to work.

And then there’s another — often-overlooked — player who has the potential to power the Aces to victory on any given night.

Perhaps because she has been with the organization since 2014, when they still were San Antonio Silver Stars, McBride is overlooked, or even taken for granted.

Since relocating to Vegas, newness has defined the Aces — the drafting of Wilson in 2018, the arrival of Cambage in 2019 and now the signing of McCoughtry in 2020. Yet, the more familiar McBride deserves appreciation.

Envision a double-teamed Wilson finding McBride as she comes around a screen, allowing her to fire from deep. Similarly, McCoughtry, an underrated distributor, should prioritize finding McBride when her drives into the lane attract extra attention.

Weaponizing McBride’s 3-point shooting could, in turn, increase the effectiveness of her drives and cuts, as over-aggressive closeouts can lead to easy buckets.

Las Vegas’s stars should also look to kick the ball out to Sugar Rodgers, who has established herself as one of the league’s best floor-spacing 3-point shooters. Last season, her first with Vegas, almost 80 percent of her points scored came from 3-point range.

The best version of Alex Bentley

Alex Bentley likewise has the ability to single-handedly steer the Aces to victories.

The Aces signed Bentley, who was a free agent after spending the past two seasons with the Atlanta Dream, to help compensate for the season-long loss of Kelsey Plum.

Bentley is the epitome of a volume scorer, with all the benefits (and detriments) of this type of player. After joining the Dream during the 2018 season, Bentley brought the best of volume scoring, often making big, backbreaking buckets as she established herself as a valuable piece on a championship-contending team. Last season, in contrast, Bentley displayed the deleterious inefficiency of volume scoring, frequently taking unwise shots too early in the shot clock in an overzealous effort to inject some life into an inept Dream offense.

Some tough love from Bill Laimbeer should enforce needed discipline on Bentley’s offensive game, which, in turn, will allow her to be at her best.

And maybe Bentley’s aggressive mindset will rub off on Jackie Young. During her rookie year, the No. 1 pick in the 2019 draft was an overly hesitant shooter. By becoming more willing to fire away, Young will require defenses to pay more attention to her, which, in turn, should make the Aces’ offensive attack more threatening.

So will the Aces’ gamble ultimately pay off?

For all the uncertainty that surrounds the Aces, as well as the 2020 WNBA season at large, it seems a sure bet that the Aces will again be one of the most interesting teams in the league. Their potential promises intrigue while their potential problems infuriate.

So, for fans starved for basketball, the gambles should be more than worth it.