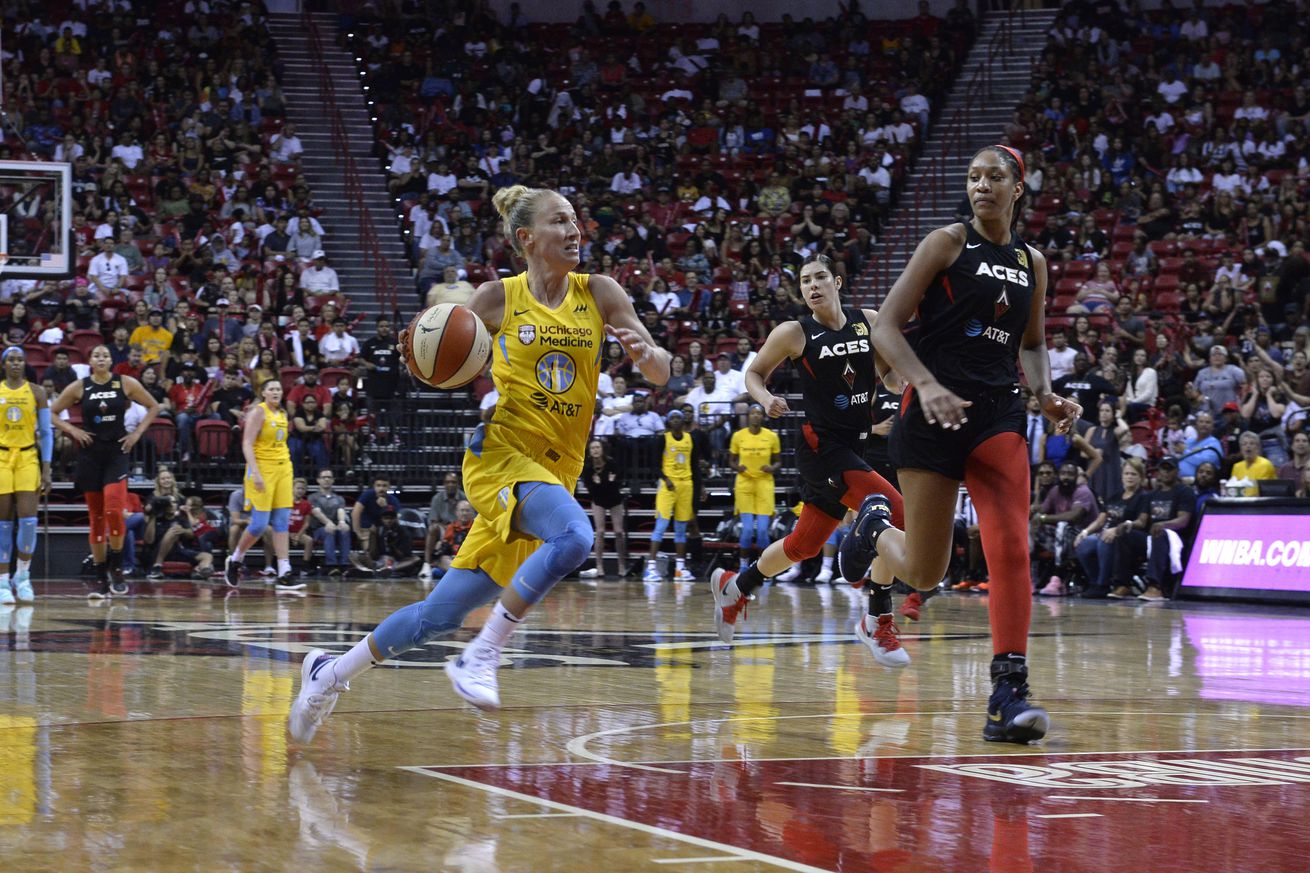 Courtney Vandersloot leads one of the best offenses in the WNBA. | Photo by Todd Lussier/NBAE via Getty Images

With two additions, the Chicago Sky hope to continue improving, but with the improvement of several other contending teams, could the Sky actually regress in 2020?

The 2020 WNBA season will be one to remember as the league is starting two months late and will take place in Bradenton, Florida. Players around the league are sitting out due to coronavirus, while others want to play a bigger role in helping their communities following societal unrest following Black Lives Matter protests.

While the majority of the country was at home and the WNBA season was postponed, Allie Quigley participated in a game of Horse with a few NBA stars and started her own challenge, which spawned many videos from across the country.

I’ve been getting a lot of people sending me their “shot”. So I’m starting the #QuarantineQuigleyChallenge show me your most creative sit down shot and I’ll send you a signed jersey and picture! Make sure you use the hashtag, tag me and @wnbachicagosky and get creative!!!! ⬇️ pic.twitter.com/cYHzQbBULR

The Chicago Sky’s Jantel Lavender has announced that she will sit out the season following surgery to repair a foot fracture. Newly-signed guard Sydney Colson is currently afflicted with the coronavirus and center Stefanie Dolson has recovered from the virus. It is unknown what impact Colson’s current health situation will have on her ability to be available to the Sky.

Colson’s signing is a part of the hype surrounding the Sky this season, who also added Azurá Stevens via trade. The re-signing of core pieces — Courtney Vandersloot, Allie Quigley and Stefanie Dolson — has fans hoping that they improve on a 2019 season that saw the Sky return to the playoffs for first time since 2016.

Potential problems for the Sky

The Sky improved by seven wins from 2018 to 2019 while teams like the Atlanta Dream, the Phoenix Mercury, and the Seattle Storm all declined from 2018. While the Dream are not improved and will be without key players this season, the Mercury expect a healthy Diana Taurasi and were able to add Skylar Diggins-Smith in the offseason. The Storm welcome a healthy Sue Bird and Breanna Stewart back to the starting lineup.

While the Sky are a better team than they were in 2018, it could be argued that some of their 2019 success was due to the lack of health among teams with better talent.

A flash in the pan?

The Sky featured a Net Rating of -8.1 in 2018 and last season their Net Rating jumped to 1.4, which is more indicative of a .500 club and not a 20-win team. The team is already an offensive powerhouse but their commitment on defense has been questioned over the past few seasons. The Sky overperformed last season; will they show improvement or will the come back to Earth?

Potential promise of the Sky

The Sky added Sydney Colson and Azurá Stevens this offseason. Colson provides backcourt depth to Vandersloot and Quigley while fans hope that Stevens can make a big impact as a starter. Stevens is coming off of foot surgery after missing nearly all of last season.

While the Sky have proven to be formidable, these additions provide insurance in case of injury and should help improve the roster overall.

The Sky were a playoff team last season and are likely good enough to return to the playoffs this season. As we saw last season, depth can be an issue on any team in the WNBA. If Colson and Stevens can provide immediate impact and help improve the defense of the Sky, look for Chicago to be in contention for a playoff spot in 2020.