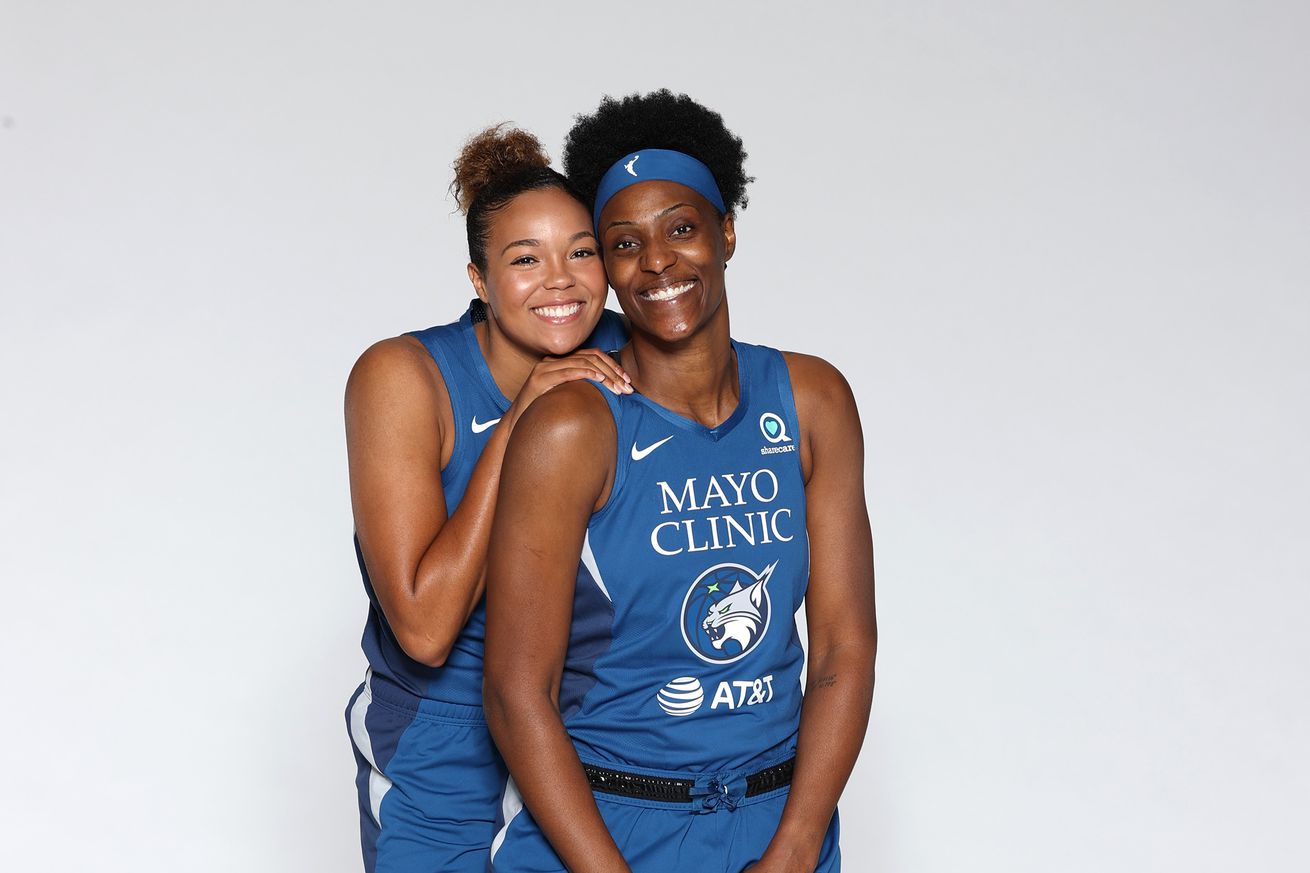 Lynx star duo Napheesa Collier and Sylvia Fowles are all smiles ahead of the 2020 WNBA season. | Photo by David Sherman/NBAE via Getty Images

Can the Minnesota Lynx make the playoffs for the 10th-straight season? To get it done, head coach Cheryl Reeve will have to rely on the talents of Sylvia Fowles and Napheesa Collier and the contributions of rookies Crystal Dangerfield and Mikiah Herbert Harrigan.

For over two decades, the San Antonio Spurs have been the gold standard in the NBA, making the postseason despite changes and challenges.

The Minnesota Lynx are the WNBA’s Spurs — or, maybe we should say that the Spurs are the NBA’s Lynx.

Both organizations are led by head coaches — Gregg Popovich and Cheryl Reeve — who are as respected for their basketball intelligence as their engagement with pressing issues of equality and justice.

Microaggression Monday: “She’s so well-spoken.” To my unaware white family/friends- this “compliment” has racial undertones and should not be used. It assumes the person in question would be less articulate – and you are surprised to find out they aren’t. #antiracism #wordsmatter

Presented with the retirement of Lindsay Whalen and the sabbatical of Maya Moore, Reeve undertook an aggressive retooling of the Lynx roster; questions lingered about their playoff prospects. Minnesota, nevertheless, exceeded expectations, again making the playoffs in spite of injuries being added to the pile of challenges.

It seems likely the Spurs’ streak of playoff appearances will end when the NBA resumes its 2019-20 season.

Will Minnesota likewise struggle to extend its postseason streak? Or, will Reeve, assisted by her all-female staff of Katie Smith, Plenette Pierson and Rebekkah Brunson, again steer the squad through a season of challenges — unprecedented ones — and clinch a 10th-straight playoff berth and possibly more?

Potential problems for the Lynx

The burdens on Sylvia Fowles

In what will be her 13th WNBA season, Sylvia Fowles might have to do more than ever.

When playing alongside Maya Moore, Lindsay Whalen and Seimone Augustus, Fowles often could count on getting the ball when and where she wanted it, allowing her to be one of the most dominating interior presences in the WNBA. She also could depend on frontcourt teammate Rebekkah Brunson to clean the glass and do the defensive dirty work.

Last season, as the lone survivor of the Lynx’s last championship-winning team — Augustus missed much of the season due to injury — Fowles’ numbers and efficiency declined as she adjusted to the new talent around her.

Fowles will face these circumstances again in 2020. Odyssey Sims and Danielle Robinson, the Lynx’s lead guards in 2019, will not be in Minnesota blue and gray. Sims will miss the season after giving birth to her first child in May, son Jaiden, and Robinson is now with the Las Vegas Aces.

Like last season, Fowles will be the team’s only true post player. Minnesota’s only other center, Kayla Alexander, has struggled to find her place in the league over the last few seasons, and the other frontcourt players are either unproven, not traditional bigs or both. For instance, while Damiris Dantas brings a valuable skill set as a stretch forward, she is not the best at bruising and banging inside.

Even though she is one of the most impactful players in the WNBA, this is a big ask of a 34-year-old Big Syl.

It may be hard to remember now, but the instant excellence of 2019 WNBA Rookie of the Year Napheesa Collier was a relative surprise.

The ways in which she improved over the course of her first professional season also were enviable. Adding elements (and confidence) to her already diverse, versatile game, she became an offensive force and a defensive linchpin by season’s end. That she led the Lynx and the league in minutes is a testament to how much she meant to the team’s 2019 success.

As such, Collier enters her sophomore campaign with great expectations.

Opponents likely will try to stall her effectiveness on offense. On the other end, they will scheme their attacks around her defensive presence. Her diversity and versatility will be tested and require that she adapt and adjust to remain effective, and she seems up to the task.

In a recent Zoom call, she shared the following about her offseason development focus:

I really focused on my perimeter game. Switching to the three position it showed me some things I needed to work on. So 3-pointers, specifically, is what I was really working on in the offseason and then ball-handling and things like that.

Additionally, if Karima Christmas-Kelly can regain the form she showed during her time with the Dallas Wings, she could help alleviate the attention on Collier and allow the rising star to flash the many facets of her game.

Potential promises of the Lynx

While mocked in the top 10 on most draft boards, Dangerfield at first looked like one of the biggest “losers” of draft night 2020, falling to No. 16. Yet, she might be the biggest winner. With the Minnesota Lynx, Dangerfield should be put in position to succeed, with the opportunity to contribute right away.

Minnesota did not exactly replace the legendary Lindsay Whalen in 2019. Odyssey Sims operated as the primary ballhandler, but she is not a traditional point guard and serves teams best as a bucket-getter than a distributor. The Lynx acquired Shenise Johnson in the offseason to bolster the one guard spot and, while Johnson is a solid option, she is likely best as a backup.

Dangerfield, therefore, can establish herself as the point guard of the Lynx’s today and tomorrow

At UConn, Dangerfield increasingly excelled at conducting and calibrating an offense, balancing getting the ball to talented teammates (2.27 assist/turnover ratio) with taking and making her own shots (56.1 effective field goal percentage; 41 3-point percentage). When at her best, she reminds of Chris Paul, an absolutely in control and crafty offensive operator.

In Minnesota, she can take advantage of her pre-existing familiarity with her fellow former Husky Napheesa Collier as she builds trust with her new teammates. Although she might not put up big scoring numbers, she, like Collier before her, can put up efficient numbers that contribute to winning basketball.

Dangerfield also should be solid on the defensive end. While her height, or lack thereof, may have led to her draft night drop, she has the strength needed to fight through the punishing physicality of pro basketball.

Mikiah Herbert Harrigan, all hustle, plenty of fire and fight

If Dangerfield can fill the on-court role formerly occupied by Lindsay Whalen, Mikiah Herbert Harrigan can bring a Whalen-esque spirit and snarl back to the Lynx.

On a team led by the mild-mannered Fowles and Collier, the emotion of Mad Kiki can reignite the Lynx when their fire is flagging. As her collegiate coach Dawn Staley said after she led South Carolina to the the SEC Tournament title, “She wants all the smoke. She wants it all.”

In the potentially mentally-draining and -deadening environment of the 2020, such a role could be especially important for the rookie.

Of course, the Lynx drafted Herbert Harrigan at the No. 6 pick more for her ability than her emotion. With her athleticism and length, she is a defensive menace, bedeviling opponents with her shot-blocking prowess and frustrating them with her quick recovery instincts.

She thus could emerge as the perfect (and needed) front-court partner for Fowles. In a conversation with Swish Appeal’s editor-in-chief Tamryn Spruill, Herbert Harrigan shared that Fowles is one of her WNBA sheroes. “Herbert Harrigan has studied the way defense can lead to offense and marveled at the concept of building her individual game identity around thwarting the offensive efforts of others,” Spruill wrote.

Herbert Harrigan’s improvement as an offensive threat during her time at South Carolina also is encouraging. While unlikely to be an offensive fulcrum for the Lynx, her gains as a shooter suggest she can be counted on to convert open shots. It also should please Lynx fans that also Herbert Harrigan expressed admiration for Maya Moore and her “even-keeled, versatile” game, according to Spruill.

One of the Lynx’s most intriguing acquisitions ahead of the 2019 season was Lexie Brown. Drafted by the Connecticut Sun in 2018, she received little playing time as a rookie due to the Sun’s stacked roster. Moving to a Minnesota team in transition presumably would present her with a better opportunity, as the Lynx likely to need the scoring punch she could provide.

Yet, even as Brown served as the Lynx’s sixth woman, it seemed that she could (and should) do more. Empowering Brown to shoot (and shoot some more!) should be central to the Lynx’s strategy this season.

With her quick-trigger and comfort firing from well behind the 3-point line, Brown can supercharge the Lynx offense.

While Reeve and company may also look to Rachel Banham and Bridget Carleton to account for the absence of Odyssey Sims’s 31.9 minutes, 13.4 field goal attempts and 14.5 points per game, giving Brown the bulk of this opportunity most can boost the Lynx’s upside.

The WNBA is a league loaded with exceptional talents and awesome teams. Making the playoffs thus is a tall task.

Analyzing their roster, it is easy to question if the Lynx have enough for a playoff push. Their need for Dangerfield and Herbert Harrigan to be special right away underscores the precariousness of their playoff prospects.

Yet, evidence suggests it is unwise to bet against the Lynx. Cheryl Reeve and company just find ways to make things work. And while Fowles and Collier likely will face challenges, this does not mean that they will not excel, forming the league’s fiercest vet-youngster tandem.

The co-captains also will do their best to ensure that their teammates maintain the right attitude during the adversities and absurdities of the 2020 season. On the Lynx approach, Fowles told reporters over Zoom:

Just keeping a positive mindset. It starts with our captains and coaches. Just making sure these younger players understand this is not normal, it’s not normal for anyone. But you pretty much have to roll with it. … We don’t want to be the team that complains.

It is really crazy. … We can’t control the things that are going on in the world, but we can control our attitude. … Everyone is in the exact same situation. There’s nothing we can do about it, we’re doing out best. We’re here to play, which is what we all wanted. … If you’re complaining then us as a team we can get ahead because while you’re busy doing that, we’re practicing, we’re making the best out of the situation.

It therefore will be unsurprising when “making the best out of the situation” results in the Lynx again making the postseason.