WNBA 2020 Season Preview: Women of the W are ready to resist and swish! 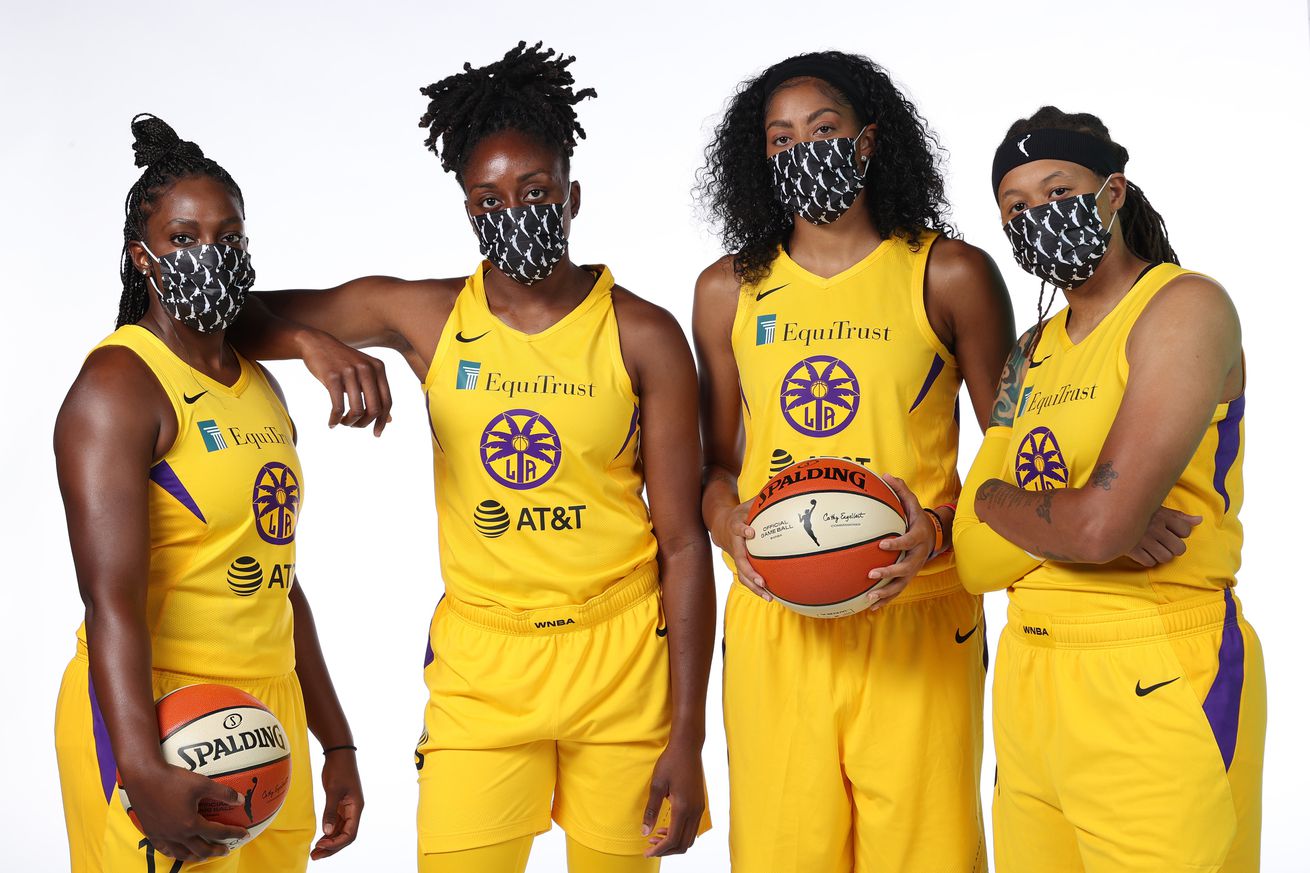 Masked, but not silenced! Chelsea Gray, Nneka Ogwumike, Candace Parker and Seimone Augustus (L to R) and the rest of the WNBA will use the 2020 season to spotlight issues that extend beyond the court. | Photo by Ned Dishman/NBAE via Getty Images

The 2020 WNBA season is finally here! While the players will be engaged in a bevy of off-court social justice activities, they’re amped for the on-court action. Here’s a preview of the single-site 22-game season that tips off on Saturday, July 25, at 12 p.m ET from IMG Academy in Bradenton, Florida.

The challenges the coronavirus crisis presents to professional sports, including the WNBA, pale in comparison to the anxiety, misery and devastation the pandemic has caused for many Americans, especially communities of color. Nevertheless, the WNBA approached planning for the 2020 season with an impressive sense of improvisation and innovation.

The league, led by its dynamic players, is making lemonade out of lemons. And like Queen Bey, the WNBA and its players seek to tell a bigger, broader and more enduring story — one that is “Bigger than Ball.”

Yet, down in Bradenton, the ball promises to be pretty good, too.

Path to playing through pandemic

Soon after Americans grasped the gravity of COVID-19, the 2020 WNBA season seemed in jeopardy after drawing excitement because of the league’s landmark CBA and delightfully frenetic free agency period.

Some way, somehow the games must go on.

How the return of sports serves equality, justice

Before the WNBA would introduce its plan for the season, protests for racial justice roiled the nation, ignited by the brutal murder of George Floyd, the impunity over the unconscionable killing of Breonna Taylor and other instances of state-sanctioned violence against Black bodies.

WNBA players quickly established themselves as moral voices in the reinvigorated Black Lives Matter movement. The urgency of the moment altered the tone of the forthcoming season, and the players positioned the league as a stage for social justice activism.

For some players, the demand for justice required stepping away. The Atlanta Dream’s Renee Montgomery and the Washington Mystics’ Natasha Cloud decided to sit out the season to fully immerse themselves in the fight for equality. The Los Angeles Sparks’ Chiney Ogwumike chose to use her newly-expanded position at ESPN to promote stories of sport and social justice, including the story of the progressive power of WNBA players.

here is my first @espn feature and you already know it’s for the remarkable women of the @WNBA.

grateful that ESPN has recently amplified my voice so that I can now do the same for my league, my communities and my generation. #SayHerName pic.twitter.com/F81Uz0F2TF

The enduring effort for equality would remain a pressing priority for the players who chose to play the season, and the WNBA and WNBPA announced the decision to dedicate the season to social justice.

In addition to adopting the Las Vegas Aces’ Angel McCoughtry’s #SayTheirNames jersey proposal, the WNBPA’s Social Justice Council will use the unique circumstances of the 2020 season to cultivate conditions for change through “community conversations, virtual roundtables, player-produced podcasts, and other initiatives.”

“Never, ever be afraid to make some noise and get in good trouble, necessary trouble” pic.twitter.com/yi1SJE6gCe

Various player-driven efforts already have accompanied these league-supported initiatives. Many players have used their Instagram stories to demand justice for Breonna Taylor, and the WNBPA worked with Taylor’s family to create shirts that will honor her memory.

The women of the @wnba are always out front.
Working with the family of Breonna Taylor, the @TheWNBPA
has created these shirts to sell, proceeds going to the Breonna Taylor Foundation. #justiceforbreonna#sayhername pic.twitter.com/061rRH2ENq

Players across the league also have called out Atlanta Dream owner and U.S. Senator Kelly Loeffler, who wrote a letter to WNBA commissioner Cathy Engelbert opposing the league’s support for Black Lives Matter.

As the Seattle Storm’s Breanna Stewart and Phoenix Mercury’s Brianna Turner have previewed, players also are likely to use their sneakers to broadcast social justice messages.

Made for the W approved ✔️ ⠀ Here’s a closer look at the custom Air Zoom BB NXT statement kicks @breannastewart30 will rock this season. ⠀ This custom recognizes the fight for equality within social justice, as well as the LGBTQ community. ⠀ #MadefortheW #MadeKicks #WNBAKicks #MFTW #NBAKicks #WNBA #NBA #KOTD #Sneakerhead #Sneakers

As a team we had the opportunity to create a shoe around a cause of our choice. I chose the Black Lives Matter Movement and the importance of voting. I told @ruffcustoms I wanted it to be like a protest- with signs being held up. I gave her some sign ideas & She executed it phenomenally and even customized the box also highlighted some great organizations dedicated to voter suppression. The 1965 sign was to highlight the voting rights act of 1965- prohibiting racial discrimination in voting, yet that’s still something we are fighting against in 2020.

We look forward to the other ways the WNBA players will use the crucible of the 2020 season to contribute to the fight for equality across differences of race, gender, sexuality, ability and other identities.

We also look forward to watching them ball out!

Breanna Stewart’s return and other reasons for glee

After some early woes in the “wubble” (and in spite of a rather bizarre decision about the playing and payment status of 2019 MVP Elena Delle Donne), it appears that WNBA is poised to successfully launch the 2020 season.

Go inside the bubble with the sights and sounds from the first week of training camp!

Although the might and magic of Liz Cambage, the ever-expanding game of Jonquel Jones, the D.C. debut of Tina Charles, the L.A. redux of Kristi Toliver and the contributions of others will be missed, the 2020 season will offer plenty of excitement, highlighted by the return of 2018 MVP Breanna Stewart and the arrival of Sabrina Ionescu, the No. 1 pick in 2020 WNBA Draft.

Stewart, No. 2 overall draft pick Satou Sabally and their squads will open the 2020 season when the Seattle Storm and New York Liberty square off at high noon on Saturday, July 25.

Which matchup are you most excited about for WNBA Tip-Off 2020 presented by @ATT? #CommentBelow #ATTtipoff pic.twitter.com/Wm5SNxBxIh

With a jam-packed schedule that is a dream for degenerate hoop heads — the two courts at IMG Academy allow for three games a day for at least six days a week — other developments and delights are certain to be discovered and dissected along the way. For instance:

Who gets the hardest-to-win trophy in league history?

And which team can do this in the absence of expected contributors, and in a season Aces star Angel McCoughtry says presents the toughest environment for winning a title?

Can members of the old guard still get it done?

Some in the W’s over-35 set still have their eyes on the prize. Will their bodies allow them to go get it?

Who will be the breakout stars of Bradenton?

The time is right for lesser-known players to make names for themselves. Which will seize the moment?

Which players can avoid a sophomore slump?

Is it Huskies over everyone when it comes to team pride?

Will the former Huskies dominate the W? Or will the Terps, Irish or Lady Vols inspire the pride of their alma mater to create some shade?

In addition to an exciting opening-day slate, the season features exciting games galore and the following matchups are worthy of anticipation and your time:

Let’s hope these will not be the final face-offs between Sue Bird and Diana Taurasi. But in case either legend retires after the season, be sure to catch both regular-season matchups between the iconic pair.

Last season gave us an epic Rookie of the Year race, with the consistent, efficient Napheesa Collier besting Arike Ogunbowale, an unstoppable point-scoring phenom, for the award. How will the sophomore stars build on their fantastic freshman seasons? The first matchup between the two, occurring near the middle of the regular season, will serve as an interesting barometer.

Might we need to look up into the Sky to find this season’s title winner? Or, should we stare into the Sun? While a bit overshadowed by more starry teams, both the Sky and Sun have the ingredients for a championship chase. The Sky return most all contributors from last season’s much-improved squad, while the Sun have retooled into a team that promises to be a defensive menace. The second game between the two, held only six days after their first, could prove consequential in the race for playoff seeding.

Of course, other intriguing matchups abound, with a plethora of tantalizing storylines sure to emerge. So, sit back and sip on the revitalizing, refreshing possibilities of the 2020 WNBA season. Cheers!