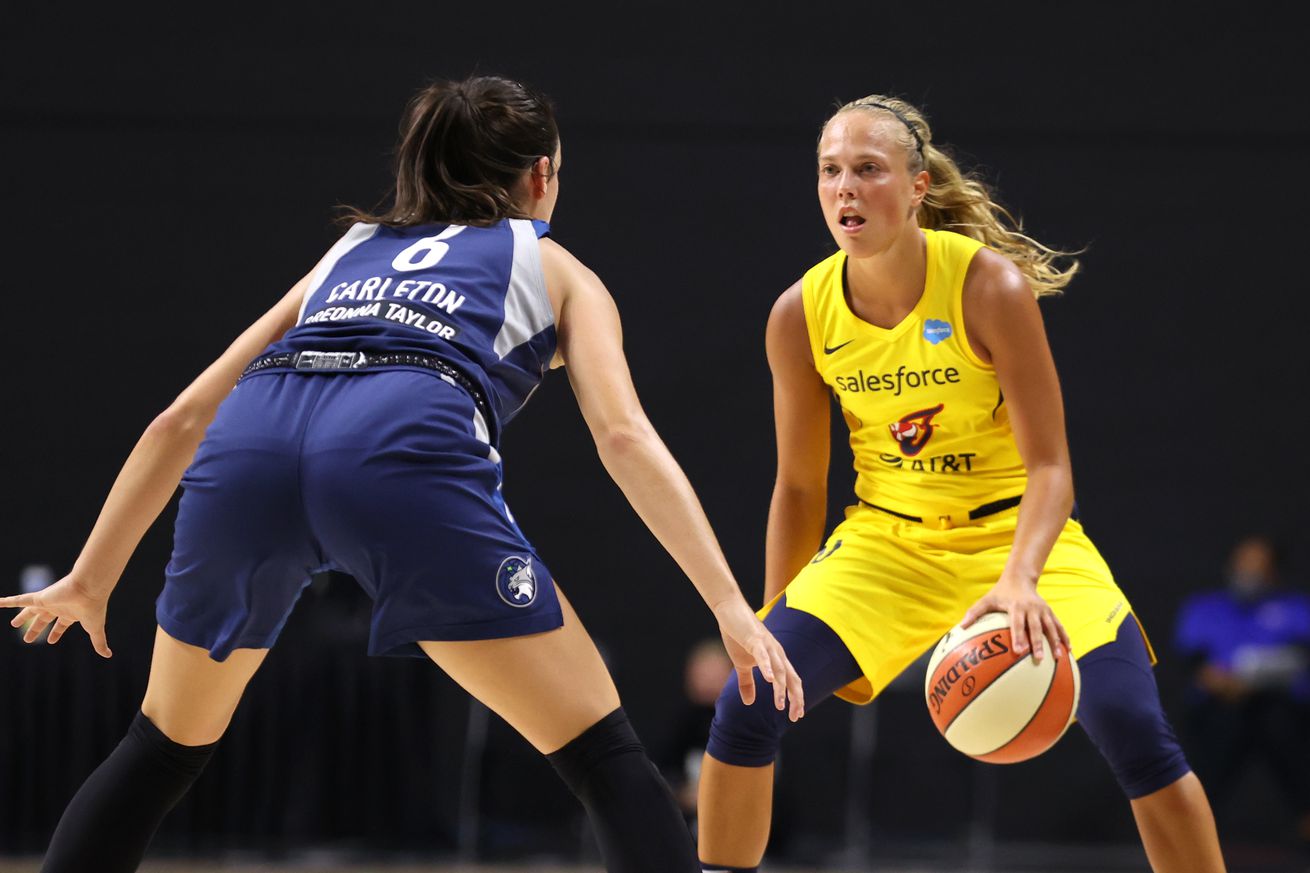 Julie Allemand (with ball) commanded respect this year with her ability to lead the Indiana Fever offense. | Photo by Stephen Gosling/NBAE via Getty Images

Julie Allemand of the Indiana Fever was the 33rd pick in the 2016 WNBA Draft. Four years later, her spectacular play in the Bradenton, Florida, bubble has been rewarded with a spot on the 2020 All-Rookie Team. Crystal Dangerfield, Rookie of the Year from the Minnesota Lynx, joins Allemand, along with Chennedy Carter (Atlanta Dream), Satou Sabally (Dallas Wings) and Jazmine Jones (New York Liberty).

Some of the highest selections in the 2020 WNBA Draft dealt with injuries this season, which opened the door for No. 16 overall pick Crystal Dangerfield to win Rookie of the Year.

No. 1 pick Sabrina Ionescu injured her ankle in the New York Liberty’s third game and missed the rest of the season. No. 2 pick Satou Sabally dealt with a nagging back injury and both she and No. 4 pick Chennedy Carter (ankle) missed six games.

No. 3 pick Lauren Cox was out with a positive COVID-19 test at the beginning of the season.

Nevertheless, Dangerfield is a deserving Rookie of the Year who led her Minnesota Lynx in scoring and helped guide them to a first-round bye in the playoffs. Sabally (Dallas Wings) and Carter (Atlanta Dream) also were phenomenal and made it onto the 2020 WNBA All-Rookie Team in spite of the time they missed.

Allemand caught fire from downtown this season with 47.8 percent shooting and was the definitive best at distributing among rookies with 5.8 assists per game and trailed only Chicago Sky veteran Courtney Vandersloot. Allemand is the only third-rounder to make a WNBA All-Rookie Team.

Carter had some pretty impressive scoring outbursts and averaged 17.4 points per game, surpassing expectations that were already high based on her career at Texas A&M. Averaging 3.4 assists per game, she also surprised with her distributing abilities.

Dangerfield just barely beat out Napheesa Collier as the top scorer on the Lynx with 16.2 points per contest. She also shot 92.2 percent from the charity stripe en route to winning Rookie of the Year by a landslide.

On a team full of rookies, Jones undoubtedly shined brightest with her high-energy offensive play. She averaged 10.8 points per game and led all rookies with 1.4 steals.

Sabally led all rookies on the glass with 7.8 rebounds per contest. She also joined an exclusive club occupied by only the greats Tamika Catchings, Candace Parker and Breanna Stewart: averaging at least 13.8 points, 7.8 rebounds and 2.5 assist per game as a rookie.