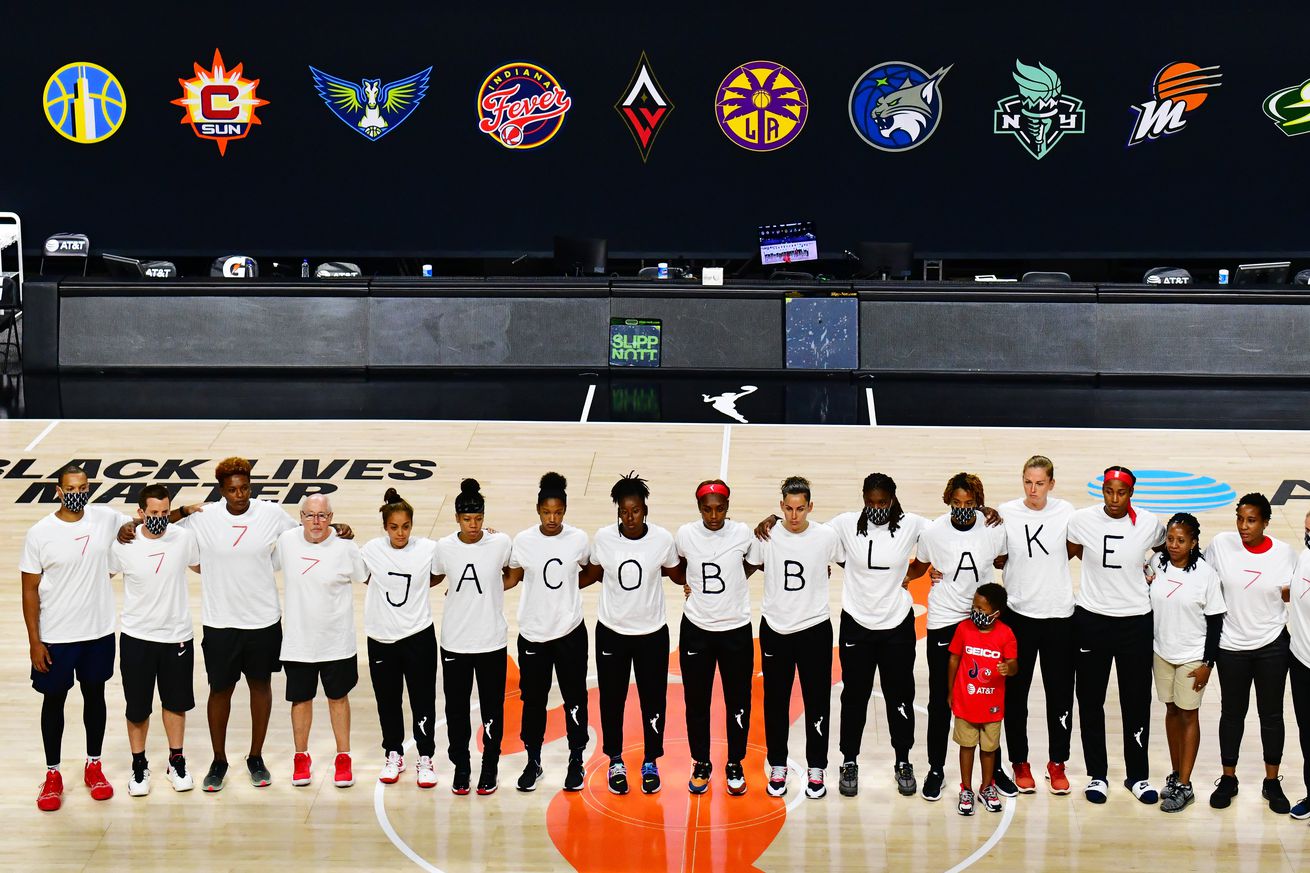 The WNBA, players’ union and newly-formed Social Justice Council banded together in 2020 to demand racial justice and an end to police brutality against Black Americans. | Photo by Julio Aguilar/Getty Images

An unprecedented move for an unprecedented season, the WNBA Cares Community Assist Award for 2020 goes to all players for their social justice work prior to, and during, the season.

For the first time in league history, the WNBA has awarded the season-long WNBA Cares Community Assist Award to all players in recognition of their collective efforts toward social justice in the months leading to, and during, the 2020 season.

To support the players’ commitment, State Farm has donated $50,000 to the Say Her Name campaign, an organization to which the players devoted their season. Bethany Donaphin, head of WNBA basketball operations, said her feelings of “frustration, rage, hopelessness, fear — the complexity of things that come with what we were experiencing in our society” — made her prioritize a social justice agenda alongside the league’s plans for a single-site season amid pandemic.

“We realized we were dealing with a crisis around systemic racism and we had to think about how to be a vessel for players to really do what they’ve always done,” she said during a Zoom conference call. “And (social justice) has been a fabric of this league for a long time. Players and league and union and teams, with a cohort of incredible advisors, could come together and stand up for something much bigger than this league and this game and really try to make an impact.”

For Donaphin, a trio of goals would create the pillars on which the social justice work would stand — education, amplification and action — with one holding greater importance than the others.

“The education process really does equip you for the rest of the journey and the fight,” Donaphin said. “And it is that, a fight, because the more we understand the systemic issues that are contributing to the injustices that we’re seeing, the more able we are to focus our energy and employ the tools that we need to actually make progress.”

In partnership with the African-American Policy Forum (AAPF), the organization behind the Say Her Name campaign, Donaphin first sought to educate the league, teams, union and players and then pursue initiatives to generate awareness among the many stakeholders who make a professional basketball season happen. “In partnership with AAPF, we were able to educate our broadcast partners, educate our game production crew, educate fans,” Donaphin said.

The decision to play the 2020 season amid pandemic and a fight for racial justice was emotionally wrought for the players, too. “When we say that literally could be us, those women (killed by police) could literally be us, it’s not far-fetched to imagine,” Sydney Colson, of the Chicago Sky, said during a Zoom conference call. “It’s saddening, and even entering this season, we were hesitant because of the emotions that were wearing on us and the weight that we knew would come with playing this season and having to perform at a high level as professional athletes and also dealing with bringing attention to Black women who were killed with state violence.”

Sitting silent in sadness was not something Colson and the other players were willing to do. By nature of being Black women, who make up at least 80 percent of the WNBA, many already were equipped to advocate for themselves and for those who walk in similar shoes.

“As Black women, we’ve been discriminated against and have experienced it most of our lives, so we have had an interesting angle for most of lives, too,” she said. “Because we are athletes, and a lot of the times we have mics in our face, we have opportunities to speak to young kids and to large audiences. I feel that helps some of us to find our voice and to find the courage to speak out. And we’re competitive, so we’re not gonna be silent.”

The ongoing police killings of Black Americans also hits close to home for A’ja Wilson, the 2020 WNBA Most Valuable Player. “You take the basketball ability away, you take the uniform away, we are Black women,” Wilson said during a Zoom conference call.

“It hits close to home,” she continued. “Yes, it could be my brother, my dad or my boyfriend. But it could also be me. It could be my mom. It could be any of us. When it hits raw and gives you goosebumps that’s what makes you want to fight more.”

For Wilson, the fight has included joining the league’s Social Justice Council, formed this year and announced as players were arriving at IMG Academy in Bradenton, Florida, the site of the 2020 season.

“It’s a voice for the voiceless,” Wilson said of the council’s work.

The voiceless in America are Black women: often marginalized in life and forgotten in death. AAPF co-founder Dr. Kimberleé Crenshaw launched the Say Her Name campaign to prevent the stories of Black women killed by police from being buried with them. When America did not protest in the streets for Michelle Cusseaux in the same way they had for Michael Brown, Cusseaux’s mother brought her daughter’s casket to city hall to make sure everyone in proximity knew her daughter’s life also had been ended by police violence.

“The killing of Michelle Cusseaux five days after the killing of Michael Brown was a tipping point in efforts to address the erasure of Black women who also were killed by police,” Crenshaw said during a Zoom conference call. “Say Her Name was a demand for recognition, a way to address the loss of the loss — families losing Black women to violence and then losing the memory of that loss. People don’t demand justice for them because they don’t know what happened to them.”

“The children are left behind,” Crenshaw added. “They cry no less for their mothers than they do for their fathers, and so we demand justice for them no less than we demand it for fallen fathers, brothers and sons.”

Crenshaw, who considers the players’ work alongside Say Her Name a reflection of “obvious, apparent, uncompromised leadership,” additionally praises the players’ for their courage and for the impact their work already is having. “They’re not going to let their voices to be muted,” she said. “They’re not going to allow the issues that they’re talking about to be forgotten and this is a new moment in the history of racial justice and in the history of athletes speaking for racial justice.”

The issues Colson, Wilson and the rest of the players are talking about concern the very real circumstances of their lives and they want those issues addressed with action. Beyond education and amplification of the issues and the names, there are things people can do to support racial justice.

“Put your money where your mouth is,” Colson said. “But I think it’s also important to look past that and think about your organization. Like, what does your leadership look like? What does your board look like? How many Black people do you hire a year? What’s the turnover for Black people?”

Wilson, meanwhile, wants the world to know that the players are not letting up.

And Crenshaw wants to see players rewarded rather than punished for their social justice work, for sponsors to increase rather than decrease player endorsements. “A place to double down on is to make sure athletes are secure in their job and that they don’t suffer any consequences for speaking about the conditions of their lives,” she said.

“Black athletes aren’t just there to entertain you,” she added. “They actually have lives and those lives are meaningful.”

The 2020 playoffs enter the semifinal round this weekend and everyone involved in the social justice work wants the world to know the efforts do not cease when the final buzzer on the season sounds. Donaphin, for one, appears ready to keep the league in the fight for the long haul.

“It’s not something that stops,” she said.

With the grant from State Farm, Crenshaw looks forward to extending the work of Say Her Name and considers her work with the league in 2020 the “opening chapter.”

“This isn’t the beginning, middle and end of the book,” Crenshaw said. “We’ve opened the story. The rest of how it ends is yet to be written.”