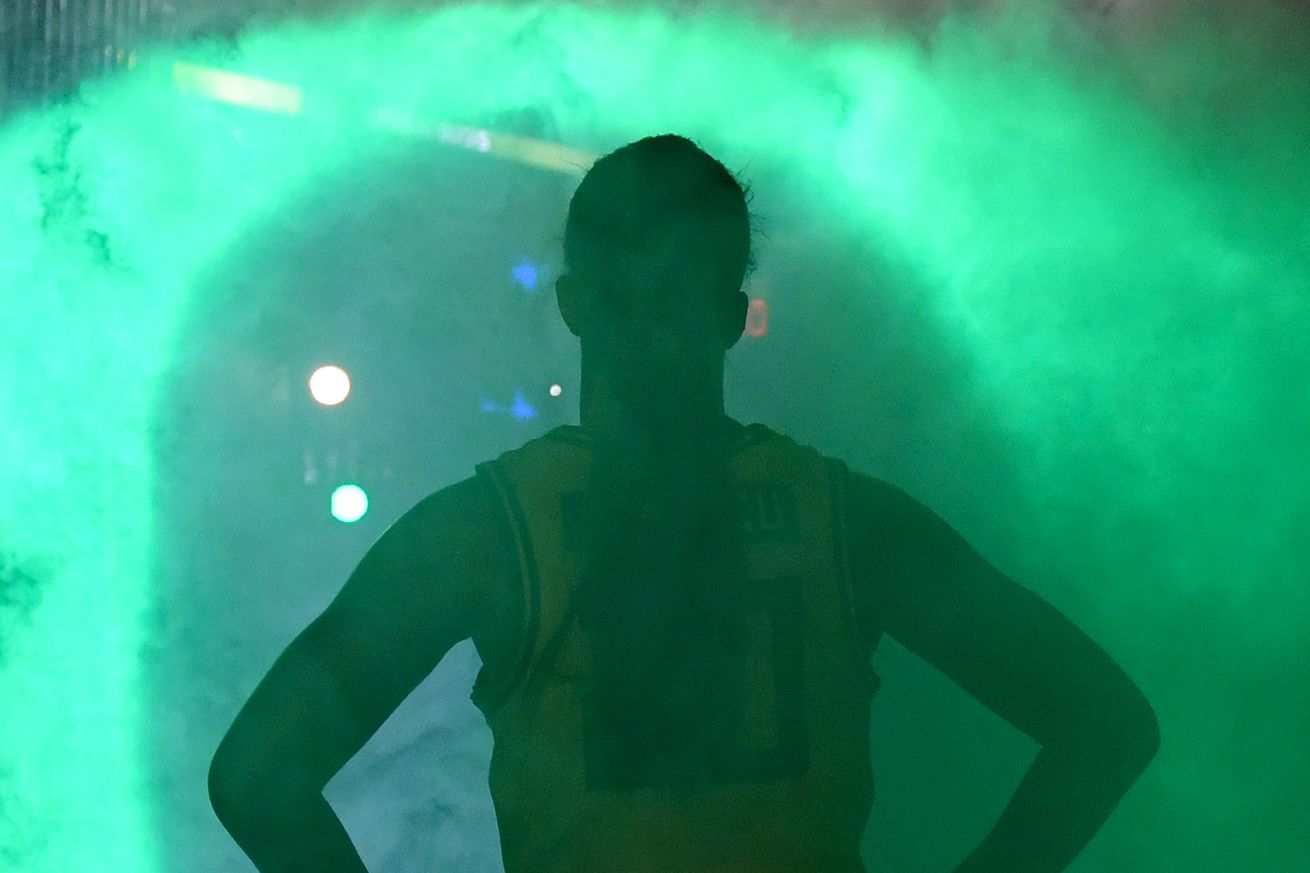 Whenever she makes her debut, Liberty fans will be ready to welcome long-awaited No. 1 pick Sabrina Ionescu to New York. | Photo by Ethan Miller/Getty Images

In addition to the anticipated arrival of No. 1 WNBA Draft pick Sabrina Ionescu, the New York Liberty eventually will welcome five other rookies to Brooklyn, supercharging the revitalization of one of the league’s founding franchises.

In the WNBA’s 24-year history, the New York Liberty never had selected first in the WNBA Draft. Turns out, the No. 1 pick was well worth the wait. In Sabrina Ionescu, the Liberty — one of the league’s flagship franchises — welcomes a foundational superstar.

Soon after selecting Ionescu with the No. 1 pick, general manager Jonathan Kolb announced:

It’s a historic night for the New York Liberty. Sabrina is a generational player whose resume speaks for itself and we are thrilled to have her as our first-ever No.1 pick. We look forward to adding her to the Liberty family, as we work to reestablish ourselves as one of the top teams in the league for years to come.

Ionescu is expected to elevate the women’s game, both in the city and beyond, with her captivating ability and charming marketability (as confirmed by the deals she recently inked with Nike and Beats by Dre).

Yet, a new team is growing in Brooklyn for reasons that extend beyond Ionescu.

When combined with the series of changes New York has undertaken over the last year, the team’s other 2020 WNBA Draft selections — No. 9 pick Megan Walker, No. 10 pick Jocelyn Willoughby, No. 12 pick Jazmine Jones, No. 13 pick Kylee Shook and No. 15 pick Leaonna Odom — should inspire excitement about the Liberty’s revival.

Everything is brand new in Brooklyn

Early in 2019, Joe Tsai, the executive vice president of Alibaba who also owns the Brooklyn Nets, bought the Liberty, rescuing the team from Westchester and bringing them to Brooklyn and the Barclays Center. After the conclusion of the 2019 season, the team did not renew the contract of former head coach Katie Smith, replacing her with first-time head coach Walt Hopkins, who is expect to implement an entertaining, analytically-inclined brand of basketball.

The final critical change was the decision to trade Liberty stalwart Tina Charles, sending the title-less perennial All-Star and Olympic gold medalist to the defending champion Washington Mystics in exchange for the No. 12 pick in this year’s draft and reserve guard Shatori Walker-Kimbrough (who only made a pit stop in Brooklyn).

Yet, it is the arrival of Ionescu that invests these changes with consequence.

She seems ready for the responsibility, telling reporters after the draft by conference call:

I just think being a part of a younger team and just trying to learn from them and seeing where I fit in, what role I’m gonna play is exciting and just bringing a competitive spirit that I have and just excited to get there and start working with the team and hopefully just continue to use my platform and what I did at Oregon and bring that in to the Liberty.

The Liberty’s other moves underscore Ionescu’s status as the franchise’s future.

Rookies will be central to the reboot

In an interview with ESPN’s LaChina Robinson, head coach Walt Hopkins suggested that Ionescu will be “pretty much everything” for the Liberty.

Based on Ionescu’s illustrious college career, such a statement is not a surprise. The NCAA’s all-time leader in triple-doubles also became the only player in college basketball history to finish their career with more than 2,000 points, 1,000 assists and 1,000 rebounds.

The number one overall draft pick @sabrina_i20 is headed to @nyliberty!

We have the reaction from Head Coach Walt Hopkins pic.twitter.com/kRqsUYRgd5

However, playing style and personnel will ensure that the Liberty maximize Ionescu, and that Ionescu can maximize the Liberty.

“Everything fits into an overall vision so everything’s intentional,” Hopkins said. “Sabrina is a big part of that.”

He further explained that he and the organization’s other decision-makers “were able to kind of build everything else that we’ve done around knowing that we were going to get her and have her as the factor in everything we do going forward.”

Hopkins also underscored the importance of surrounding Ionescu with “multi-positional basketball players, athletes who can do a lot of things,” with special emphasis on “players who can shoot the ball [and] guard multiple positions.”

The Liberty’s five other 2020 draftees suggest this vision is beginning to successfully coalesce.

Due to the constraints of the 12-woman WNBA roster, it is more likely than not that all do not make the 2020 squad (which currently has 18 players). Nevertheless, all possess skill sets that suggest they have the potential to positively contribute in Brooklyn.

Walker elected to jump to the WNBA after she emerged as an All-American during her junior season at UConn, establishing herself as an elite scorer with an especially dangerous 3-point stroke.

While not as diverse and dynamic of a scorer as Ionescu’s former Oregon teammate and No. 2 pick Satou Sabally (Dallas Wings), Walker still can form a potent offensive pair with Ionescu. As Walker said after the draft, “[Ionescu] likes to pass — that’s not a secret — and I like to score. I think we’ll have great chemistry on the court and it’ll work out just fine.”

In addition to her elite shooting ability, Walker also sports the multi-positional profile described by Hopkins. A fit and sturdy 6’1’’, Walker can play as a big guard, classic wing or undersized big. Like Ionescu, Walker is a strong rebounder for her size, suggesting she can help the Liberty get out on the break and quick convert defensive stops into easy offense.

The acquisition of Willoughby confirms New York’s commitment to “athletes who can do a lot of things.”

The Liberty flipped Shatori Walker-Kimbrough for the Virginia Cavalier, who was drafted No. 10 overall by the Phoenix Mercury.

The ACC’s leading scorer will bring her physical and efficient brand of offensive ball to the WNBA. Although a strong 3-point shooter, Willoughby is better known for her ability to draw contact on her drives to the hoop. Her physicality also should translate on the other end of the floor, suggesting that the East Orange, New Jersey, native could carve out a pro basketball home in Brooklyn.

Jocelyn Willoughby’s reaction to being the 10th pick is so wholesome pic.twitter.com/x7WHe2DW3k

Jones also exemplifies the type of player cited by Hopkins. Before the draft, he hinted at the organization’s interest in the Louisville product, telling The Athletic, “Jaz has some high upside. She’s athletic, she shoots the three at a high clip.”

ESPN’s Robinson also praised Jones’ pro prospects, suggesting, “She is a Swiss Army knife because of her versatility.”

This versatility could be used to unleash Ionescu as an off-ball threat.

In contrast to Walker and Willoughby, who primarily will play off Ionescu, Jones can serve as a secondary playmaker. With the defense potentially preoccupied by Ionescu’s off-ball actions, Jones can take advantage by tapping into to her athleticism to generate buckets for herself and others.

The Liberty went back-to-back with Louisville Cardinals. Kylee Shook will follow Jones, as well as former Cardinal (and 2019 No. 2 pick) Asia Durr, to Brooklyn.

When speaking to The Athletic, Hopkins likewise expressed pre-draft excitement about Shook, sharing, “Kylee is a high-level defender, shoots the three and, like I said, both players (her and Jones) are highly thought of.”

Again, the attention to shooting and defense is evident.

Except, in contrast to the Liberty’s four previous draftees, Shook brings these skills from the power forward position. Due to Shook’s ability to fire from deep and hold her ground on defense, the Liberty should be able to play a four out, or even five out, offensive system.

As the Liberty’s sixth and final selection of the 2020 draft, it likely will be difficult for Leaonna Odom to earn a spot on the final roster. Nevertheless, the appeal of her potential is clear. As Swish Appeal’s Eric Nemchock assessed in his mock draft, “Odom is one of this class’ wild cards: a 6-foot-2 forward with guard skills and good defensive instincts who, for whatever reason, never blossomed into a star in college.”

If the still-raw Duke Blue Devil puts it together, she could become a dangerous, dynamic piece.

All these draftees are not guaranteed to make the team because, even though the Liberty have struggled to string together victories these past few seasons, they claim the services of more than a few talented players.

Prior to the 2020 WNBA Draft, Kia Nurse and Asia Durr composed the Liberty’s core.

While Durr disappointed during her 2019 rookie season due to nagging injuries, Nurse emerged as a potential star, making the 2019 WNBA All-Star team. Although her scoring efficiency tailed off over the latter half of the 2019 season, Nurse impressed when playing overseas in Australia, winning the 2020 NBL MVP Award.

After the draft, Ionescu praised the play of Durr and Nurse, noting, “They have great guards there. Their ability to shoot and spread the floor out, but also run in transition.”

In free agency, the Liberty were relatively quiet, adding one veteran point guard, Layshia Clarendon, after allowing another, Bria Hartley, to depart. With a roster populated with young guards, expect the Liberty to call on Clarendon to be a stabilizing source of experience and wisdom.

Also apart of this corps of young guards is Marine Johannès, who inspired intrigue during her 2019 debut season. When paired together, Johannès and Ionescu can stymie opponents with their smooth and swaggy offensive stylings.

New York’s returning front court players present potentially potent pick-and-roll partners for Ionescu. Although Han Xu may still be a ways away from consistently contributing, Amanda Zhaui B and Reshanda Gray both should benefit from Ionescu’s presence. As should Kiah Stokes, who is slated to return to the W after skipping the 2019 season.

Much about the 2020 WNBA season remains unknown. Whatever shape the season takes, it most likely will be difficult for a very new Liberty team to truly contend for any kind of title.

Yet, for all the chaos of 2020, the year has brought a long-awaited sense order to the Liberty. The arrival of Sabrina Ionescu marks their rightful re-emergence as one of the WNBA’s signature organizations.