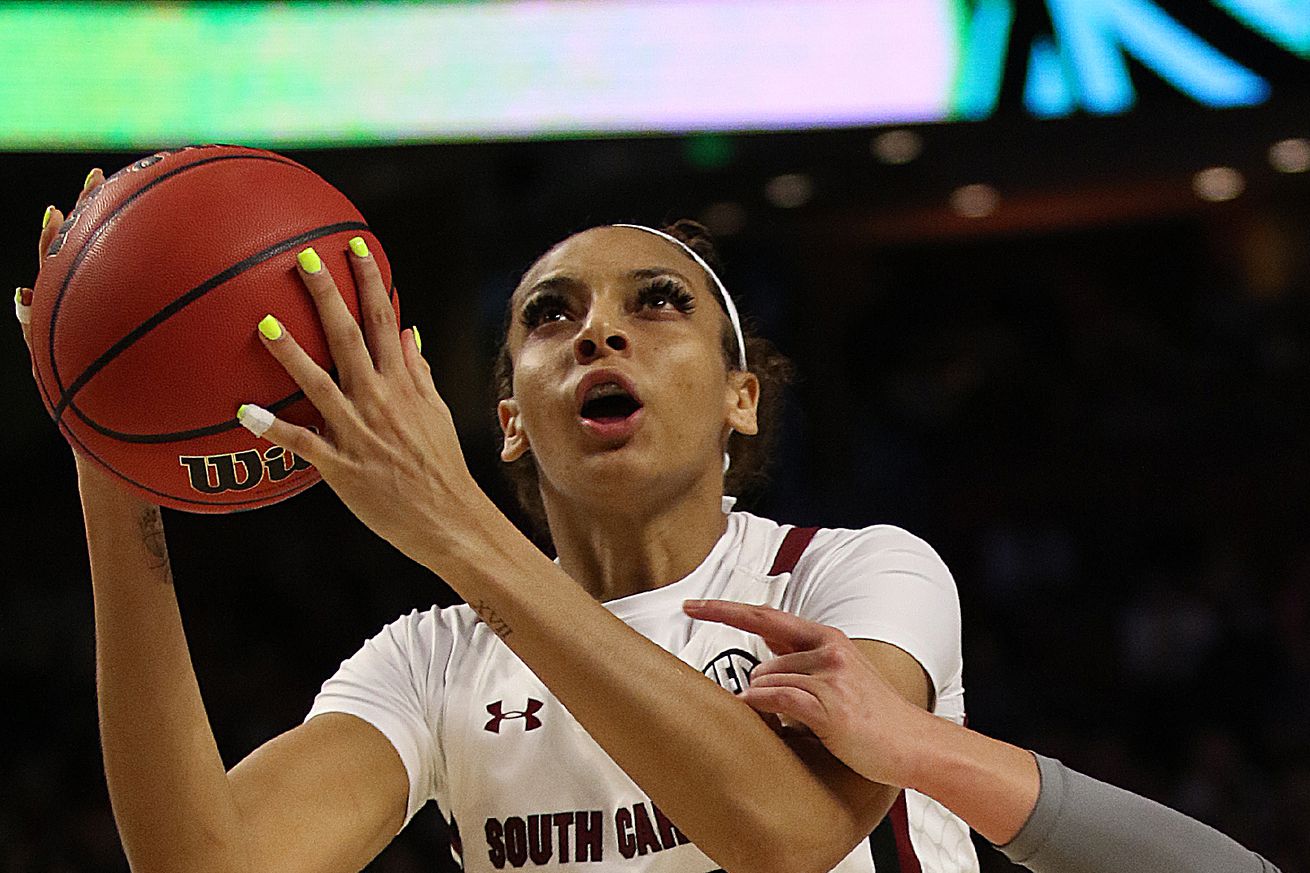 Mikiah Herbert Harrigan averaged 2.2 blocks per game as a junior at South Carolina and 1.7 as a senior. | Photo by John Byrum/Icon Sportswire via Getty Images

The Minnesota Lynx went with a bold first-round pick, taking Mikiah Herbert Harrigan of the South Carolina Gamecocks. They also snagged UConn Huskies point guard Crystal Dangerfield and received Erica Ogwumike of the Rice Owls in a trade with the New York Liberty.

The Minnesota Lynx were the best team in the WNBA throughout the past decade, winning four championships between 2011 and 2017. Heading into the 2020 season, the team has now lost all of the core players from its original championship run. Maya Moore is taking another year off to focus on criminal justice reform, Lindsay Whalen retired from playing and entered coaching, Seimone Augustus signed with the Los Angeles Sparks and Rebekkah Brunson is now an assistant coach under Lynx head coach Cheryl Reeve.

Sylvia Fowles, who helped lead Minnesota to two of its four titles, is the only star player remaining from the dynasty days. 2020 WNBA Draft additions Mikiah Herbert Harrigan, Crystal Dangerfield and Erica Ogwumike could be integral to the Reeve’s rebuilding process.

The Lynx needed to inject new life into the franchise and they did just that by taking the ultra-competitive Mikiah Herbert Harrigan of the South Carolina Gamecocks with the No. 6 overall pick.

A 6-foot-2 forward, Herbert Harrigan is known for her toughness and shot-blocking ability. Not known as a prolific scorer (she played behind A’ja Wilson for two years), Herbert Harrigan led the No. 1 team in the nation in scoring in 2019-20 with 13.1 points per game. She also improved her shot since her freshman year, when she averaged 46.7 percent from the field and made just one of four total attempts from 3-point range. As a senior, Herbert Harrigan averaged 50.6 percent shooting from the field and made 20 shots from distance on 46 attempts.

Herbert Harrigan was expected to be drafted at the end of the first round or perhaps at the start of the second round — not at No. 6. As her South Carolina teammate Tyasha Harris (picked No. 7 overall by the Dallas Wings) put it, Herbert Harrigan “shocked the world” by being the third post player taken in the draft after Baylor Lady Bears AP All-American Lauren Cox and Bella Alarie of the Princeton Tigers. Herbert Harrigan went ahead of highly rated prospects Ruthy Hebard of the Oregon Ducks, Beatrice Mompremier of the Miami Hurricanes and Joyner Holmes of the Texas Longhorns.

In a twist of irony, the expected No. 6 overall pick, Crystal Dangerfield of the UConn Huskies, fell to No. 16, where the Lynx grabbed her after making Herbert Harrigan their top priority.

The Lynx were drastically better in the paint than they were from beyond the arc last year and Dangerfield will fill this 3-point shooting need. Minnesota also could use a true point guard with starter Odyssey Sims being a combo guard and backup Lexie Brown being moved into a two-guard role. Plus, Sims is pregnant and going to be out for the immediate future.

In 2019, Minnesota was tied for 10th in 3-point makes and ranked ninth in 3-point shooting percentage. Dangerfield is a great 3-point shooter for a one-guard and averaged 41 percent from distance as a senior with 71 makes. She has a great all-around offensive skill set and led UConn with 3.9 assists per game. Dangerfield is mostly known for her poise as a floor general but she can put up big stat lines if opposing defenses aren’t careful.

Dangerfield was the fifth point guard selected in the 2020 draft after Sabrina Ionescu of the Oregon Ducks, Chennedy Carter of the Texas A&M Aggies, Harris and Kathleen Doyle of the Iowa Hawkeyes.

Minnesota entered the draft with picks Nos. 6 and 16 but received No. 26, Erica Ogwumike, in a draft-night trade with the New York Liberty. The Lynx gave up forward Stephanie Talbot to get Ogwumike, whose sisters Nneka and Chiney had illustrious careers with the Stanford Cardinal and now star for the Los Angeles Sparks. If Erica makes the Lynx roster, she will be playing for one of L.A.’s major rivals.

A 5-foot-9 rebounding guard, Erica averaged 10.1 boards per game over the course of her college career with the Rice Owls. She also averaged 19.0 points as a senior and 17.1 for her career (albeit in a non-Power 5 Conference USA).

Chances to make the roster

As the No. 6 overall pick, Herbert Harrigan is a lock to make the roster and will add depth to Minnesota’s frontcourt. A much improved Brown and reigning WNBA Rookie of the Year Napheesa Collier also are locks to make the team. Those three — plus five fully protected players — add up to eight claimed roster spots.

Veteran Kayla Alexander, a 6-foot-4 center, is the second-tallest player on the training camp roster behind Fowles, a starter. Alexander’s height gives her a chance to make the team but Dangerfield will likely knock either her or forward Cecilia Zandalasini off the roster. Newly-acquired guard Rachel Banham and 2019 second-round pick Jessica Shepard also be competing for the opening-day roster, making Ogwumike a long shot.

The Lynx appeared to really like Shepard and had her playing a lot of minutes before her season-ending injury six games into her 2019 rookie season. She and Herbert Harrigan could form a youthful frontcourt duo off the bench.