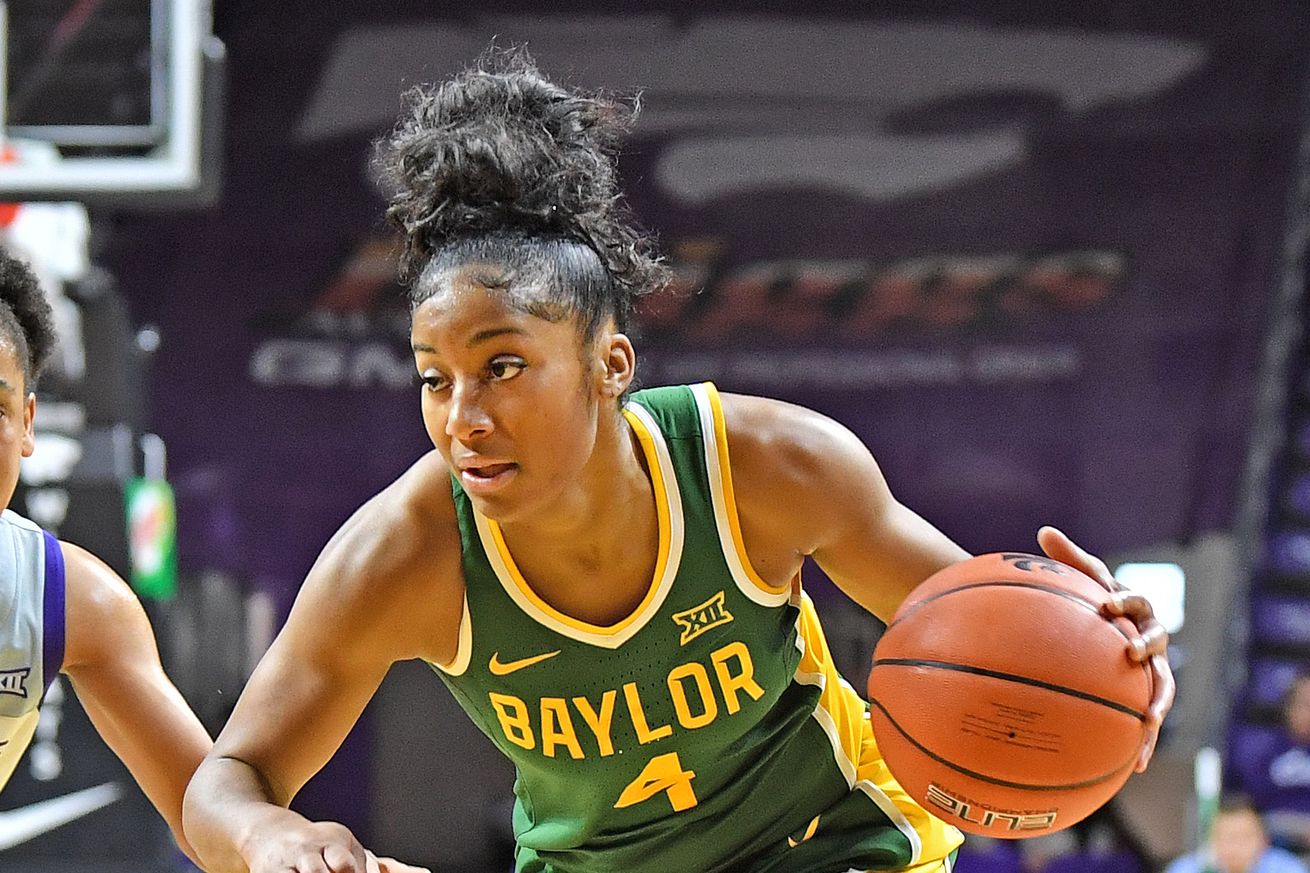 Te’a Cooper (right) hopes to carry the success she had as a Baylor grad transfer over to the pros. | Photo by Peter G. Aiken/Getty Images

The Phoenix Mercury had one thing on their minds entering the 2020 WNBA Draft: guards. Te’a Cooper and Stella Johnson will compete for a roster spot behind Skylar Diggins-Smith. A trade for Shatori-Walker Kimbrough fills an important need.

One of the bigger concerns for the Phoenix Mercury heading into the offseason was the state of their backcourt. Diana Taurasi was never truly healthy in 2019. With Briann January also battling injuries, the Mercury needed more dynamic guard play to remain competitive.

A Skylar Diggins-Smith trade and Bria Hartley signing later, the Mercury looked to be in much better shape, but they weren’t done yet. By the end of the 2020 WNBA Draft, Phoenix had completely overhauled is guard rotation, drafting Te’a Cooper (Baylor) and Stella Johnson (Rider) while trading its first-round pick to the New York Liberty for Shatori Walker-Kimbrough.

Phoenix — land of the combo guard?

While Diggins-Smith and Hartley (and Taurasi, to an extent) are perfectly capable of running a team from the point guard position, their WNBA careers have been better defined by their scoring ability. Diggins-Smith, in particular, has averaged better than 17 points per game in four of her past five seasons, ranking in the WNBA’s top 10 in three of them.

When Mercury general manager Jim Pitman selected Te’a Cooper at No. 18 overall, he likely had a similar vision for the Baylor standout. As the lead guard for the pass-happy Lady Bears, Cooper averaged 4.6 assists per game but also chipped in 13.6 points on an effective field goal percentage of 52.1 percent.

As with most Baylor products in the post-Brittney Griner era, it is hard to single Cooper out as the team’s “star.” In 2019-20, the Lady Bears ranked seventh in the nation in assisted shot rate (68.7 percent), and Cooper joined three of her teammates — Juicy Landrum, Lauren Cox and DiDi Richards — in dishing out at least three assists per game.

That might work in Cooper’s favor as a member of the Mercury. Diggins-Smith, Taurasi and Hartley will get plenty of minutes, sure. But when Cooper’s number is called, she’ll be ready to score or distribute — something Pitman and head coach Sandy Brondello surely find appealing.

With the 18th pick in the 2020 #WNBADraft, the Phoenix Mercury select Te’a Cooper from @BaylorWBB!

Welcome to the family, Te’a! pic.twitter.com/oH4IVtqWIo

Johnson, too, wore many hats during her collegiate career, though her example is considerably more extreme. Drafted No. 29 overall, Johnson led the NCAA in scoring as a senior at Rider, dumping in 24.8 points per game and hitting the 30-point mark on seven occasions. She also contributed 3.8 assists per game for the Broncs, culminating in a massive 34.5 percent usage rate that few players in the country exceeded.

That usage, however, may make Johnson’s transition to the pros a difficult one. She won’t be asked to carry nearly the load she did at Rider. And while we don’t know what the Mercury’s offense will look like with Diggins-Smith and a (hopefully) healthy Taurasi, you can bet a large chunk of possessions will be run through Brittney Griner in the post. Johnson will need to adapt to more of a complementary role if she’s going to stick in Phoenix.

With the 29th pick in the 2020 #WNBADraft, the Phoenix Mercury select Stella Johnson from Rider University!

Can both Cooper and Johnson make the Mercury’s final roster?

It’s possible, but unlikely. As explained by Her Hoop Stats’ Richard Cohen, Phoenix will be able to carry only 11 players under the current salary cap, making the roster a tight squeeze for first-year players. At least one of Phoenix’s 2020 draftees will make the team. Unless Pitman and Brondello lose faith in Alanna Smith or Sophie Cunningham (both of whom were rookies in 2019), however, fitting both on the team isn’t realistic.

Before drafting Cooper and Johnson, the Mercury used their first-round pick (No. 10 overall) on — surprise! — a guard. Jocelyn Willoughby from the University of Virginia was the pick, and her wholesome reaction immediately stole many fans’ hearts.

Phoenix didn’t hang onto Willoughby, though — shipping her rights to the Liberty in exchange for Shatori Walker-Kimbrough (yes, another guard).

Walker-Kimbrough originally was traded to New York just days prior.

Looking at the Mercury’s roster, Walker-Kimbrough seems to fit much better in Phoenix anyway. Other than Taurasi, the Mercury lacked a true spot-up 3-point threat — an absolutely crucial piece on a team featuring a post player like Griner and a dribble penetrator like Diggins-Smith.

Walker-Kimbrough’s task in Phoenix will be simple: play alongside the Mercury’s ball-dominant players and knock down open shots. For whatever reason, she was unable to fulfill her collegiate reputation as a 3-point sniper during her time in Washington. In three years as a Mystic, Walker-Kimbrough shot a combined 31.5 percent from beyond the arc — granted, in a fairly small role.

Walker-Kimbrough should get all the corner 3-point looks she can handle in Mercury lineups featuring Griner, Taurasi and Diggins-Smith. If her presence can deter defenses from consistently collapsing on those players, her acquisition will pay dividends.

We’ve acquired Shatori Walker-Kimbrough from New York for the rights to the 10th overall pick.

Welcome to The Valley, SWK! pic.twitter.com/1kuAy1mvnR