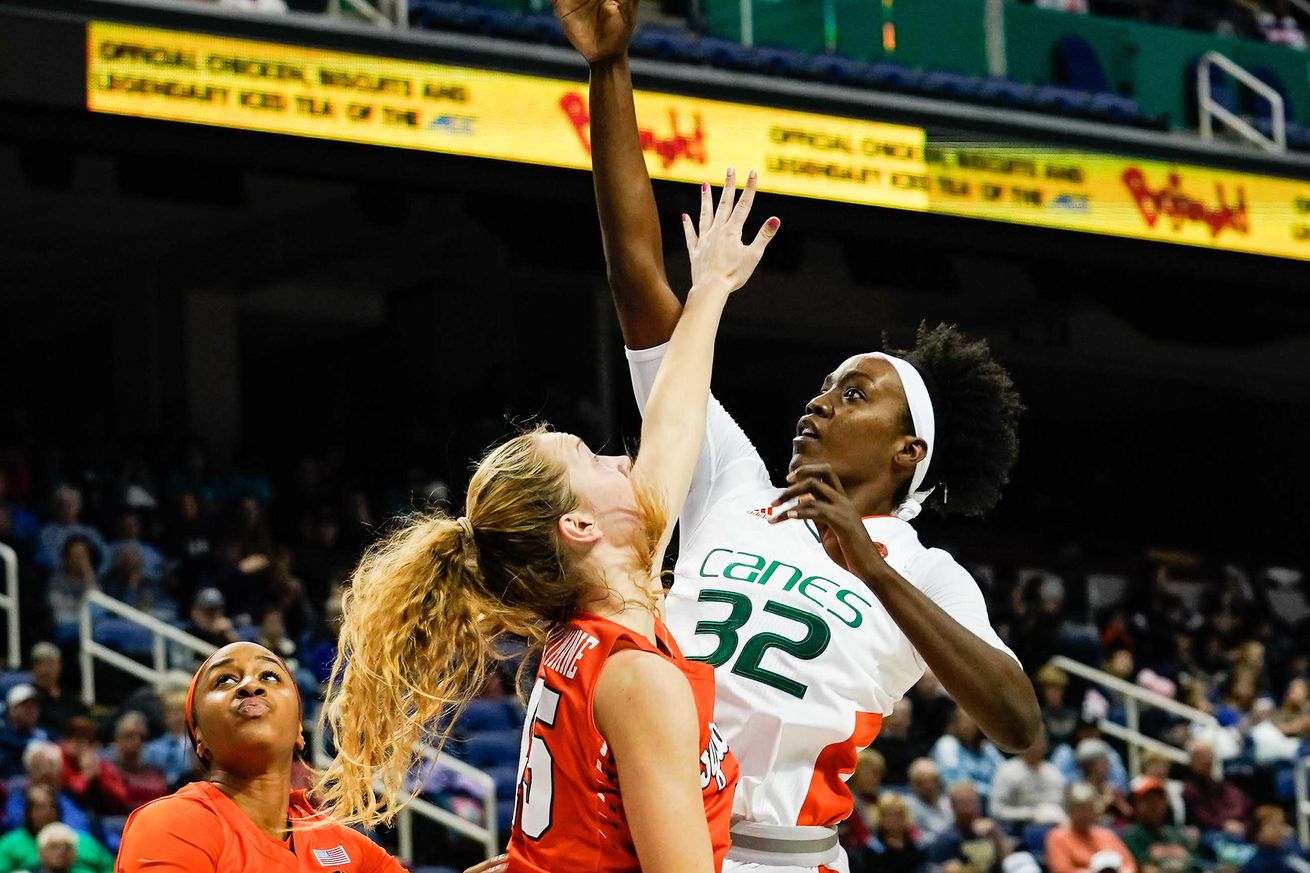 Beatrice Mompremier (right) gets a shot off during a 2019 ACC Tournament game. | Jim Dedmon-USA TODAY Sports

The Los Angeles Sparks went to the WNBA Semifinals in 2019 and their roster is still jam-packed with talent. Here’s where No. 20 overall pick Beatrice Mompremier (Miami Hurricanes), No. 22 pick Leonie Fiebich (Germany) and No. 34 pick Tynice Martin (West Virginia Mountaineers) fit into the team’s plans.

The Los Angeles Sparks have had an eventful offseason highlighted by the return of 2019 All-Star Kristi Toliver and the signing of Minnesota Lynx legend Seimone Augustus. They also received guard Brittney Sykes and center Marie Gulich in a trade with the Atlanta Dream that sent 6-foot-7 center Kalani Brown to Atlanta.

In the draft, Los Angeles used the No. 20 overall pick to steal 6-foot-4 forward Beatrice Mompremier of the Miami Hurricanes, who could potentially add depth to the frontcourt. Mompremier’s draft stock fell after she missed a good chunk of her senior season with a foot injury, but she was still projected as a first-round pick.

Mompremier and the Sparks’ needs

One of the Sparks’ biggest needs heading into 2020 is improving their interior defense. Last year they were tied for ninth in the WNBA in blocks per game. They also allowed 18.4 free throw attempts per game (3rd worst in the league) and their 26.5 defensive rebounds per game came in at No. 7 in the league.

Mompremier averaged 1.5 blocks over the course of her freshman and sophomore seasons with the Baylor Lady Bears. As a junior and senior at Miami that number declined to around one per game.

Gulich, who stands at 6-foot-5 and was the No. 12 pick in the 2018 draft, hasn’t seen much playing time in the WNBA yet, but developed into a great shot-blocker with the Oregon State Beavers, averaging 2.8 blocks per game as a senior. She will be competing with Mompremier for a roster spot.

Where Mompremier has the edge, though, is with her impressive 7.7 defensive rebounds per game in two years at Miami (and 5.8 overall). Gulich averaged 5.8 defensive boards over her last two seasons at Oregon State and 3.8 for her career.

The Sparks’ biggest need right is getting to the free throw line more often. In 2019, they were third in the WNBA in shooting percentage from the stripe, but dead last in free throws attempted. Candace Parker led the team with 3.0 attempts per game, followed by Nneka Ogwumike with 2.9, but Brown was on track to become their biggest free throw weapon. She went to the line for 1.6 shots a game in just 13.5 minutes per contest.

Mompremier got to the line 5.4 times per game as a junior at Miami and averaged 4.9 trips as a senior. She will be able to help in terms of aggressiveness. But it’s hard to replace the size of Brown when it comes to putting the team on the free throw line.

And it’s not just about getting to the line — Mompremier will need to continue to improve upon her free throw shooting percentage in order to help the Sparks. She shot 37.8 percent from the line as a freshman at Baylor before improving to 60.0 percent as a sophomore.

After transferring to Miami, Mompremier shot 57.1 percent as a junior. Her only decent free throw-shooting season came as a senior when she shot 73.1 precent over the course of 16 games.

Filling out the final roster

Of the Sparks’ draft picks, Mompremier is the only one with a good chance to make the roster. No. 22 overall pick Leonie Fiebich from Germany and No. 34 overall pick Tynice Martin of the West Virginia Mountaineers are long shots.

Highlights: Fiebich uses her height to her advantage

Returning Sparks guards Tierra Ruffin-Pratt and Sydney Wiese are not great scorers, but Ruffin-Pratt started 33 games last season and Wiese started 16 times. They both have a good chance to make the roster, as does forward/center Maria Vadeeva who averaged 7.8 points in just 12 minutes per game over the course of 15 contests in 2019.

For the Sparks, the only position on the court that isn’t occupied by a major star is the shooting guard spot. They have improved in that area with the additions of Toliver, Augustus and Sykes.

Assuming this year’s starting lineup will include point guard Chelsea Gray, forwards Candace Parker and Nneka Ogwumike, and center Chiney Ogwumike, the two-guard spot will be open for Toliver, who has returned to L.A. after a three-year stint with the Washington Mystics. Toliver, a 38.7 career 3-point shooter, played off-ball quite a bit in 2019 as Natasha Cloud emerged as a star point guard for Washington.

The two-spot could also be filled by Riquna Williams, who came to L.A. the same year Toliver left (2017). Now the two sharpshooters will get the chance to play together.

Williams started 13 games last year and is four years younger than Toliver, but has come off the bench for most of her career and has been successful in that role. Whether it’s Williams or Toliver, the Sparks will have a gifted scorer coming off the bench as a sixth woman.

Sykes, a fourth year player whose career scoring rate is 11.3 points per game, and an aging Augustus will also be in the backcourt mix. Due to an injury, Augustus did not play until Aug. 6 of last year and ended up appearing in just 12 games, while averaging 3.8 points. But back in 2018 she started 33 games with a 10.8 scoring average.