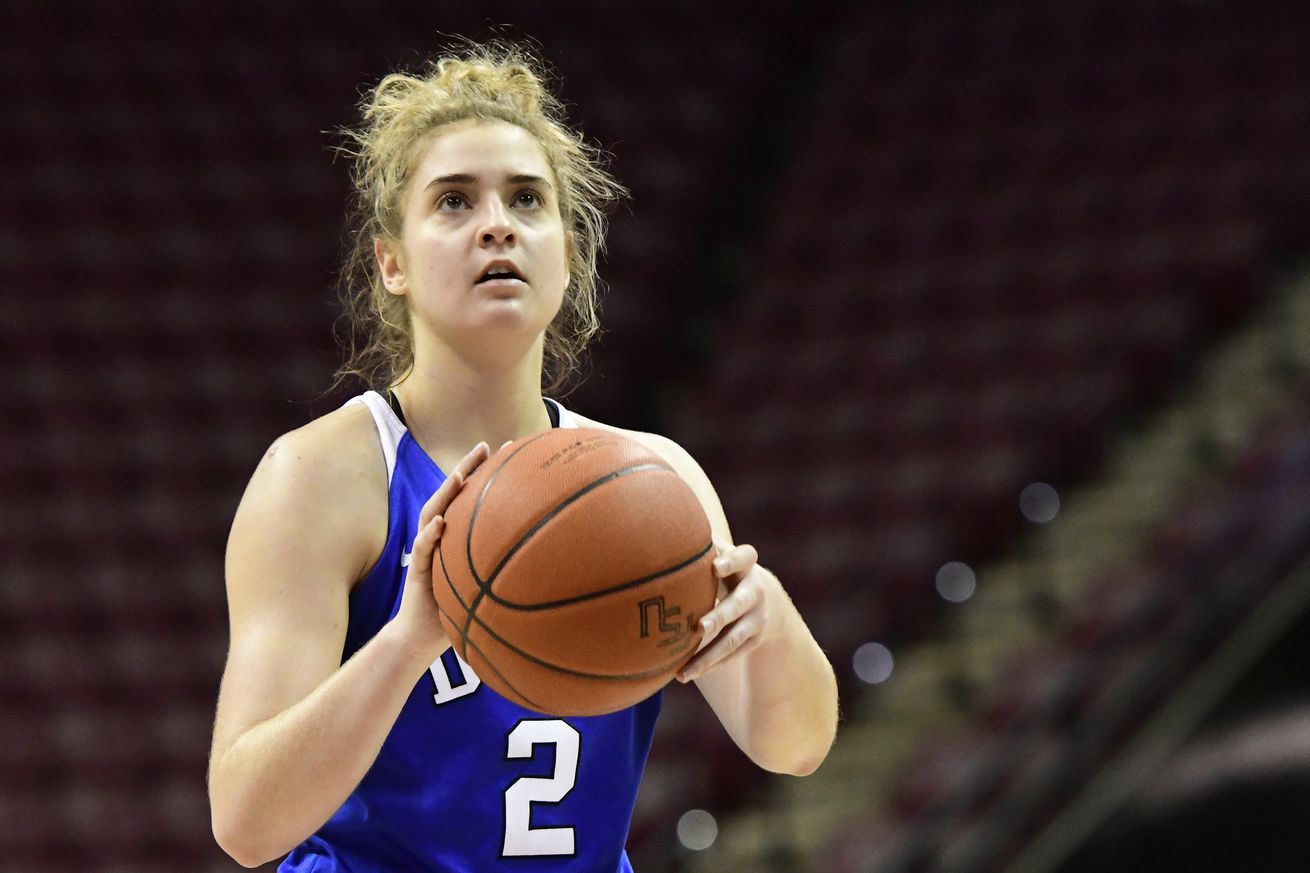 Haley Gorecki in her natural habitat: at the free-throw line. | Photo by David Allio/Icon Sportswire via Getty Images

The Duke Blue Devils have made a late-season surge, winning nine of their last 11 ACC contests. Senior guard Haley Gorecki has played well, setting the tone for the team’s physicality on offense while being its primary playmaker.

The Duke Blue Devils may not be the national power they once were, but after bottoming out at 15-15 during the 2018-19 season, Coach Joanne P. McCallie’s squad has risen back to relevance. Duke finished ACC play with a 12-6 record, picking up impressive wins against Syracuse, Florida State and NC State along the way.

Leading the way for Duke is senior guard Haley Gorecki. The 6-foot-0 combo guard embodies how the Blue Devils want to play: aggressively and frenetically, turning defense into offense and forcing opponents into mistake after mistake.

This high-risk, high-reward style of play is not without its faults. While Duke forces opponents into a turnover on 20.5 percent of their possessions, the Blue Devils’ own turnover rate is even higher, at 22.3 percent. Duke also allows opponents to take 33.6 percent of their shots from 3-point range, which is among the highest mark in Division I.

When you have star players, though, team flaws can be covered up. Gorecki is that player for Duke, and she’s leading the Blue Devils back to ACC competitiveness.

Gorecki earned 2018-19 ACC All-Conference honors and subsequently was named to the All-ACC Preseason Team for 2019-20. She leads the Blue Devils in scoring (18.0), rebounding (6.3) and assists (4.3), and was named recently to the All-Conference team once again. Gorecki also might be in conversation for ACC Player of the Year, though she’ll face stiff competition from Louisville’s Dana Evans and NC State’s Elissa Cunane.

How she helps the Blue Devils

As one would expect from a player who leads her team in most major statistical categories, Gorecki plays a huge role in her team’s performance. Per Her Hoop Stats, Gorecki’s usage rate of 26.7 percent is by far the highest on the team, and she rarely gets a break, playing an average of 35.8 minutes per game.

Gorecki’s game can be described in one word: aggressive. There are few guards in the country more adept at drawing fouls than Gorecki, who ranks eighth in Division I in free throws made (156) and scores nearly 30 percent of her total points from the foul line. The latter figure is not insignificant for such a high-usage player. Gorecki’s ability to get to the hoop and draw contact manufactures plenty of easy points whenever the Duke offense stalls.

Combine that with slick off-ball movement and you have a player who excels in late-game and out-of-bounds scenarios.

.@HaleyGorecki = more than a shooter@DukeWBB still up on @PackWomensBball, stretch run of the fourth quarter coming up!

Gorecki also has plenty of range on her shot, though her 3-point shooting percentage (33.3 percent on 168 attempts) doesn’t necessarily reflect it. As the team’s leading scorer and distributor, however, Duke’s opponents throw everything they have at Gorecki, making it more difficult for her to get clean looks from beyond the arc.

The ACC Tournament begins on Wednesday, March 4, but you’ll have to wait a bit to see Duke play. The Blue Devils are seeded at No. 3 and their possible quarterfinals opponents include Miami, Clemson and Boston College. If Duke advances, a rematch against No. 2 seed NC State in the semifinals is entirely possible and would be a must-watch game. All ACC Tournament games will be featured on Fox Sports Go or WatchESPN, depending on market.